What You Need To Know Before Installing AIS

Once the stuff of science fiction, AIS lets you "see" other close-by boats even if they are beyond your visual range. Here's what you need to know before installing this dynamic safety system. 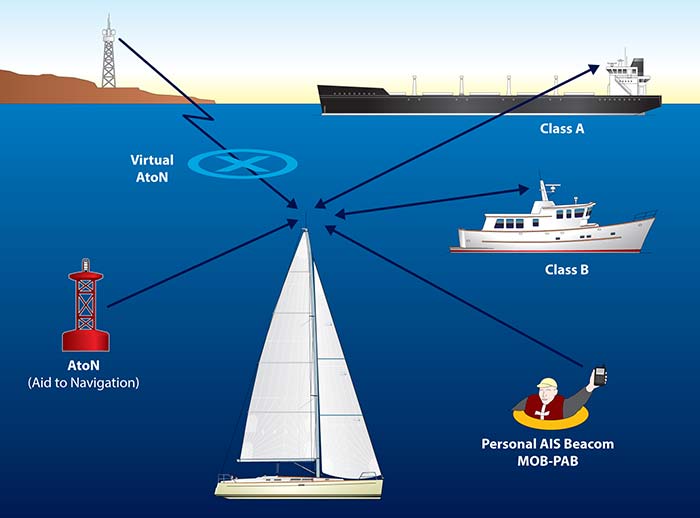 Automatic Identification System, more commonly known as AIS, first became available to recreational boaters about 10 years ago and has proved a significant addition to boating safety. For any boater who wants every layer of protection available, AIS is a godsend. But there are some limitations you need to know before installing the system.

For the uninitiated, first a little background: Boats that have an AIS transceiver installed can automatically broadcast critical information, including the vessel's identity and real-time position, course, and speed, using VHF frequencies. It can also automatically monitor the same information of other AIS-equipped vessels, substantially reducing the risk of collision, even in thick fog or dark of night. Even without a transceiver, an AIS receiver built into some VHF radios can monitor this information.

Onboard displays, such as chartplotters, decode these messages and plot the position of the AIS target. AIS also can be used to receive weather data and, every 3 minutes, mark the location of aids to navigation (ATON), such as a buoy equipped with AIS. As with radar, there is no requirement for recreational boats to have or use AIS on board, but many of the major organizations that sponsor offshore sailboat races now require the installation and use of AIS, and the requirements vary by organization.

There are two classes of AIS: Class A and Class B. The higher power Class A transmits every 10 seconds or fewer has its own display and keyboard, is usually meant for ships and other commercial vessels, and costs more. Commercial vessels weighing more than 300 gross tons or over 65 feet, certain passenger vessels, commercial vessels, and ships carrying hazardous cargo are required by U.S. and international law to have AIS.

Class B, for recreational boats, is fully interoperable with Class A, and both vessels will "see" each other. But Class B has lower power, transmits its position every 30 seconds (every 3 minutes if moving slower than 2 knots), is available as a "black box" and displays on your chartplotter, is more affordable (many in the $500 range) and is all that most pleasure boats need.

In addition, personal wearable AIS beacons are available to attach to life jackets for man-overboard safety. These battery-operated, low-power devices are also sometimes called AIS MOB, a type of personal AIS beacon. These palm-sized units have limited range, however, because the antenna is short and can be blocked by waves. But they can quite literally be a lifesaver if a crewmember goes over the side. (More on how these two work together below).

Is this collision-avoidance technology right for you? Take our new online course, "AIS Electronics for Boaters — See and Be Seen on the Water," a blend of practical knowledge and technical know-how brought to you by the BoatUS Foundation and the U.S. Power Squadrons. At your own pace, learn about the different types of AIS and what each offers, important terms such as "update rates" and "time to closest approach," and more. Upon completion, you'll be able to plan out your own AIS system. BoatUS.org/Courses

For message reliability, AIS transmissions alternate between two VHF frequencies that are at the high end of the marine VHF band dedicated worldwide to AIS operations.

What Antenna Do I Need?

There are two common AIS antenna configurations: The first is an AIS transceiver equipped with its own coaxial cable, leading to a dedicated AIS antenna. In an ideal situation this would be located at least 10 feet above the water and at least 4 feet from another VHF antenna or conductive material. (So mounting two dedicated antennas on top of a mast won't work.) The second method is an AIS transceiver and a VHF radio connected to a low-loss radio frequency (RF) switching device, commonly called a "splitter." The output of the RF switch connects to the existing VHF cable and antenna, so you can have one or the other, but not both transmitting simultaneously. 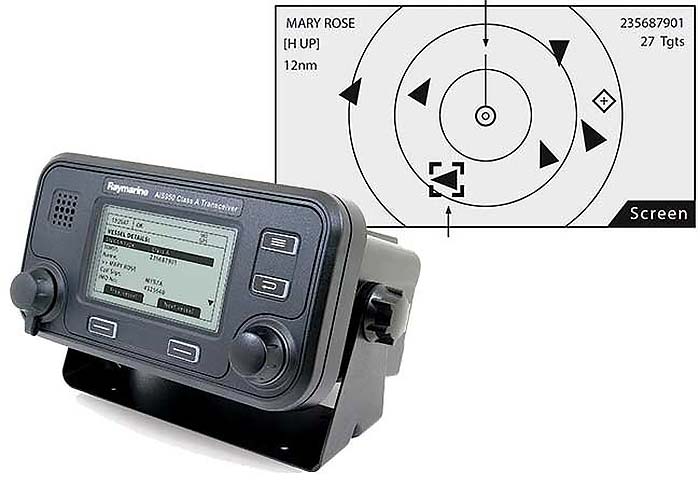 With AIS and VHF radio antennas, height is far more important than power, as transmissions are essentially "line-of-sight" (LOS), meaning that signals travel in straight lines. Lower radar-arch or pole mounts work but at the expense of range. Mounting a dedicated AIS antenna is somewhat easier on a two-mast sailboat or on a powerboat where antennas can be spread out. Other antennas and conductive materials, such as sailboat shrouds and radar arches, will affect performance, so for best results, antennas must be sited clear of these.

Getting the AIS "transmit" signal to the antenna and the "receive" signal back again requires good cables and connectors with no more than a 50-percent power loss. That sounds like a lot of loss, but with a 60- to 70-foot sailboat mast, that's about all you can get.

What Is A Splitter, And Do I Need One?

While a dedicated AIS antenna is the most robust and reliable choice, providing redundancy and, usually, full operation of AIS and VHF simultaneously, in many cases AIS can share the boat's VHF antenna and cable, which already has been installed for the VHF radio, by using a "low-loss" splitter. This minimizes the need for cabling and gets the antenna to the top of a mast, where it is more likely to receive signals from a person wearing an AIS beacon with a half-submerged antenna. Typically this antenna is mounted at the top of a mast, radar arch, flybridge, or another high point onboard where it has the greatest range and is more likely to receive weak signals.

Early splitters sometimes split the power between AIS and VHF, each getting a portion. But modern splitters are really a low-loss RF switch that delivers all power to either the AIS or VHF and has an amplifier for the received signals.

However, when most splitters are installed, the use of the VHF radio to make calls will block AIS transmit-and-receive functions for the duration of the call. So, when critical things are happening and AIS should not be disrupted, use your handheld VHF or a second installed VHF radio with a dedicated antenna if you have one. This could be critically important in a MOB situation when a personal AIS beacon antenna is barely out of the water and with significant wave action present. In most cases, given the time between transmissions for Class B systems, unless the VHF is used on the receiving vessel extensively, and each transmission (the time that the mic key is held down) is long, this will not have an appreciable effect on the AIS display shown on the receiving vessel's MFD.

A Few Thoughts On Wiring

There are several types of coaxial (or coax) cables, and although all share the same basic characteristics, the thicker the coax cable, the better. There are two sizes of coax that boaters will most likely find at their local retailer — RG-8X and RG-213 — with the latter being noticeably larger than the former. Or even better, search for LMR-400, the same size and cost as RG-213 but lighter, more flexible, and one-third less loss. They make use of the same type of connectors and antenna that voice VHF installations use. Replacing a 25-foot length of RG-58 coax from the radio to the mast step with LMR-400 will save 1 dB and increase both transmit and receive power by 20 percent. 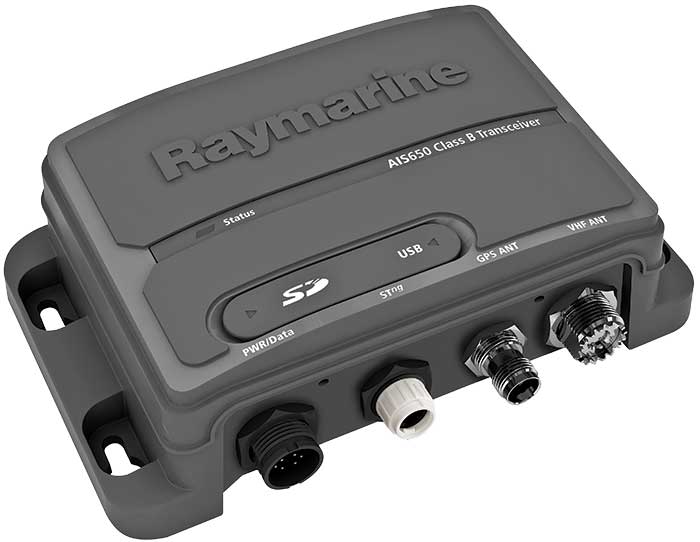 No matter the configuration, it takes effort to get even one-half of the available VHF power to the antenna on a sailboat that has long cable runs and where cable losses tend to be higher. On a powerboat, cable runs are frequently shorter, and when heavier coax is used, the shorter run can make up to 90 percent of the radio power available to the antenna, which to some extent helps overcome the lack of antenna height. On the receiver side, a good splitter will either have an amplifier to reduce the receiver splitter loss or will specifically state that it is "zero loss" in AIS and VHF receive mode. A table in our System Checkup section online (see "Why So Much Of Your Signal Power Gets Lost" below) compares the characteristics of some of the splitters on the market.

Whether considering a voice VHF antenna, a dedicated AIS antenna, or an installation using an RF switch/splitter with a common antenna, the same approach applies. The total loss will depend on the type of coax cable and its length, the number of connections in the cable (every connection further degrades the signal), and, if used, any losses in the RF switch/splitter.

The NMEA Installation Standard recommends a cable and connector loss of less than 3 dB (50 percent), so invest in the best wiring you can and make as few connections from end to end as possible.

AIS is a remarkable system, and it makes sense for some mariners who are spending time offshore or in poor visibility to consider installing it and letting the world of commercial shipping know where you are, especially if you need assistance.

To get the most from your AIS installation, key choices must be made about equipment, cables, and antennas. In a special arrangement between BoatUS and the Cruising Club of America, on our BoatUS website we're carrying the CCA's comprehensive new "AIS Overview and Installation Considerations." This in-depth instruction manual, available is written for the boater and describes the following in even more detail than this article:

Why So Much Of Your Signal Power Gets Lost

In a radio system, signal power loss and gain are measured in decibels, or dB. Decibels, named for Alexander Graham Bell in the early days of the telephone industry, are used to represent the percentage of power lost or gained. The formula compresses the scale of numbers, which is useful when looking at power losses along miles of telephone wire or miles of radio coverage. A few sample values show how dramatically our signal power is lost over distance.

Once the VHF signal leaves your antenna, it starts spreading out, its energy diluted over an imaginary surface. Each time the distance doubles, the area the signal must cover increases by four, and the power drops to one-quarter of its previous value, or a 75-percent loss (6 dB). Further weakening of the signal occurs as it travels over seawater between antennas. There may be additional loss of between 3 and 6 dB for each doubling of distance. Thus, the VHF signal power available at the receiver can drop 87 percent (9 dB) or more each time the distance doubles.

Because of its high frequency, VHF is a line-of-sight (LOS) system; the signal isn't useful if the two antennas cannot "see" each other. Line-of-sight radio signals on a round earth are determined by the height of the two antennas. The LOS between two 10-foot antennas is about 7.5 miles, but between two 50-foot antennas is 17.5 miles. More than doubling the range with antenna height is a big deal; to accomplish this without increasing antenna height could take an eightfold increase in power, if even possible.