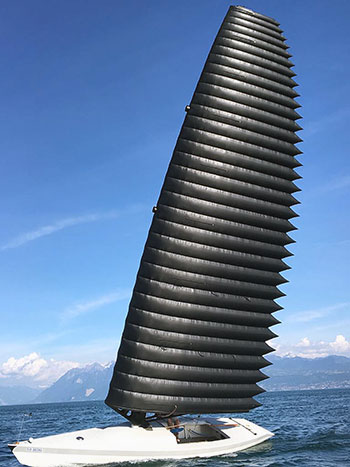 A team of three Swiss guys have come up with what they are calling IWS — Inflated Wing Sails. At first glance, the sail looks similar to a paraglider wing stood on end. Not surprisingly, one of the designers of the sail is Edouard Kessei, who developed some of the first successful paragliders.

The sail is inflated with an electric fan and is supported internally with a collapsible mast that raises and lowers in concert with the sail. The mast is entirely self-supporting, in a similar way to the popular Freedom rig, so there are no shrouds or other supporting paraphernalia, which makes for a very streamlined-looking sailboat. As for sail controls, there is a mainsheet, and that’s it. Sail shape is mostly predetermined by the cut of the inflated sail. Reefing in strong winds is accomplished by partially deflating the sail.

While an interesting concept, it may be a hard sell to sailors as the boat would have to be built to accommodate the mast, boom, and sail from the outset and is not something that could be retrofitted without colossal expense. I could also see that some sailors would have concerns about this sail, for instance what if a hole prevents the sail from staying inflated, or you run out of electrical power and the internal inflation fan stops working?

While still in the concept stage, long-term benefits are apparent: The lack of sail controls and the ease with which one can be out sailing could make this a game changer for elderly and infirm sailors who aren't ready to hang up their sailing gloves just yet.