Take a look at the latest designs that help improve stability, efficiency, ride, and handling.

As long as there have been boats plying the water, there have been boatbuilders trying to find more efficient, better-riding hull bottoms. Those we're showing here are some of the latest tweaks and improvements we've seen in the never-ending quest for a better hull. Our editors have had firsthand experience testing boats with all of these designs in various sea conditions, and have found that each type has its own advantages and disadvantages.

Stepped hulls work on the principal of reducing wetted surface, which in turn reduces friction between the hull and the water. A step in the hull is an abrupt change in hull-height running athwartships, from chine to chine, and ending with a notch in each of the hullsides. As the boat begins to plane, an area of low pressure is created immediately aft of this transition, drawing in air via the notches. 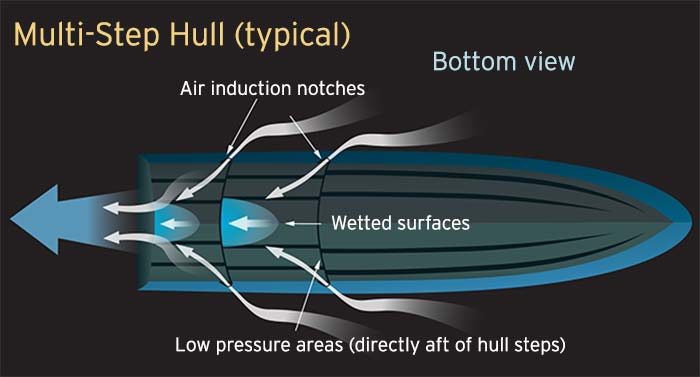 Steps in one form or another have been around for more than a century, but it's quite difficult to create a step that results in both efficiency increases and good handling. Often with poorly designed steps, the introduction of air under the hull has the unfortunate side effect of reducing stability while on plane, because some sections of the hull are no longer supported by the water.

In the past couple of decades with the help of modern CAD design, however, many builders have overcome this issue. More recently, they have managed to take the concept one step further — literally — by introducing multistep designs that boost speed and efficiency to the tune of 10 to 15 percent. Two good examples can be found in SeaVee's Z-series boats and in many Formula models. Today, the main downside to multiple-stepped hulls is the increased cost associated with R&D and increased design complexity.

Another way to increase efficiency while also improving ride is to utilize a hull design that compresses air under the hull. This can provide additional lift while also creating an air cushion of sorts under parts of the boat, which reduces wave impact. The most common example is a powercat that has a "compression tunnel," which is widest at the bow and grows slightly narrower as you move aft. The biggest downsides to utilizing this design are the potential for a sharp "snap" roll (which can occur when beam seas cause one hull to drop into the trough while the other rises on a wave); misting out of the front of the tunnel, commonly called "sneezing," and tunnel slap (when both hulls submerge all the way and the top of the tunnel slams against a wave). In recent years, however, there have been several modifications to basic powercat designs, in some cases combining them, more or less, with a V-hull.

The Mako "Inverted V" hull, used on its line of small inshore boats called Pro Skiffs, is one example. We've found these boats do compress some air centered under the hull and, as a result, they run significantly smoother than more common semi-V hulls usually found on boats of the same size. They don't suffer from a snap roll or sneezing. The handling takes a bit of getting used to, however, because the boat doesn't bank in turns in the same way as a V-hull.

Bayliner's M-Hull design, found on its Element line, tilts more toward a traditional hull in the center but incorporates small V-shaped protrusions to either side, which pack some air while also enhancing stability. We've found that these hulls do in fact feature unparalleled stability, and they run slightly more smoothly than most boats of a similar size. That said, they can be less sensitive to trim and usually maintain a more or less flat attitude while running. The propeller can tend to ventilate when boats with this hull design are put into hard turns, especially if the engine is trimmed up at all.

Steps and compression tunnels aren't the only way to get air under a boat's hull to reduce friction. Beneteau takes a completely unique approach with its Air Step system, used on many larger models (up to 46 feet), which actually pipes in the air. Vents located above the waterline run through the boat and to its hull bottom, introducing a flow of air to reduce friction between the hull and the water. 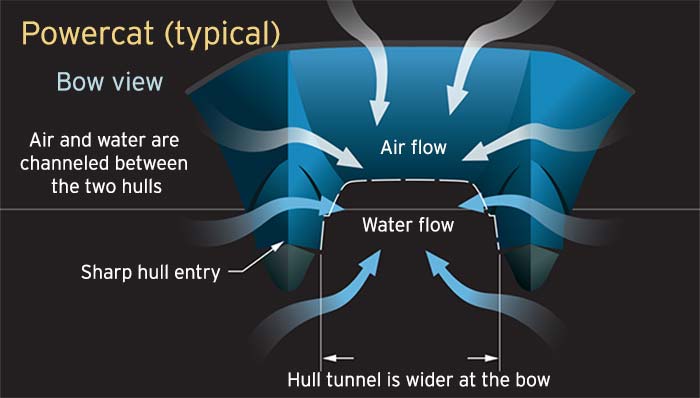 Beneteau claims gains in speed and efficiency of around 15 percent, as well as increased ride comfort. When testing boats with the Air Step hull, while unable to compare apples-to-apples performance numbers against an identical boat without Air Step, we felt there was a demonstrable improvement in ride comfort and an increase in responsiveness at the helm.

Borrowing on a concept first imagined by natives of the South Pacific and documented by a passenger on Magellan's 1519 circumnavigation, proa cats have two asymmetrical displacement hulls. Modern designs, most notably that of the Aspen series of powercatamarans, utilize the difference in water resistance between the hulls to counter the drive force of a single diesel inboard, which powers the boat from one side. 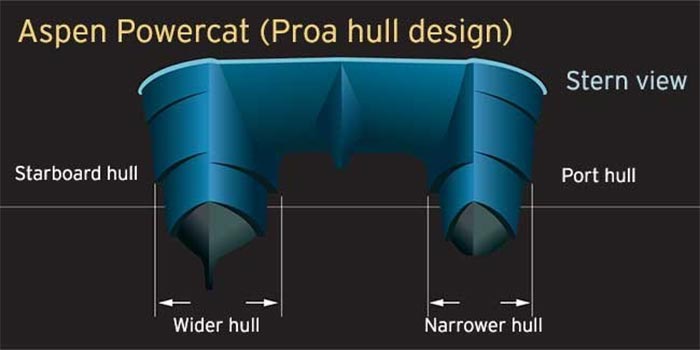 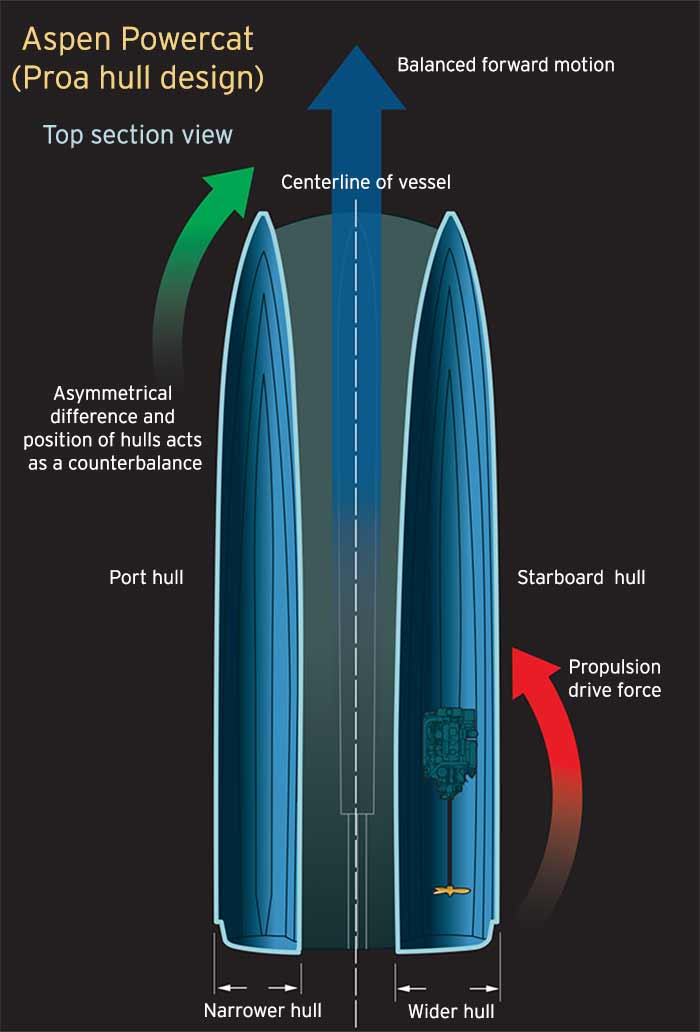 Aspen says the smaller hull has a 50-percent reduction in drag due to width, plus another 20-percent reduction thanks to the absence of running gear. As a result, its 40-foot model can attain almost 9 mpg at speeds of 6 mph and more than 2 mpg at speeds approaching 20 mph. As a point of reference, many modern trawlers of similar size get 3 or 4 mpg at 6 mph and less than 1 mpg at planing speeds.