We've adapted boating habits to fight plant and animal invaders from distant waters. Now agencies and manufacturers are looking for new ways to cope with those already here.

Depending on where you live (and boat), and what type of boating you do (think trailer boating), dealing with aquatic invasive species (AIS) has become an all-too-familiar addition to your boating routine.

Since 1988, when zebra mussels, native to the waters of Eurasian ports, were first discovered in Lake Michigan, it has been a battle to stop the onslaught of non-native species setting up residence in our waters.

Dreissendin (or quagga) mussels are the invading scourge in the Pacific Northwest, California, Arizona, Nevada, and Lake Mead; sea lampreys and Asian carp in the Great Lakes region; the predatory lionfish is a flourishing invasive species in U.S. Southeast and Caribbean coastal waters; snakehead, native to Asia and Africa, are a problem from Maine to Florida, in the Chesapeake Bay, and now on the West Coast.

The Great Lakes region could be considered Ground Zero for nasty nuisance creatures from abroad — from the zebra mussel and the round goby (a fish), to Eurasian water milfoil and hydrilla plants, to the spiny water flea and the rusty crayfish. All have taken up residence over the past two or three decades.

So what have boaters done about it? Well, they've adapted their operation and maintenance habits to not merely live with the problem but to go one better: help stop further spread of the unwanted plant and animal species that are now here.

When the zebra mussel invasion was linked to their hitchhiking in the ballast tanks of ocean-going ships, Congress passed legislation in 1990 to stop, or at least control, the invasion. Unfortunately, it's been a continual battle ever since to halt the onslaught of non-native species. In 1993 the U.S. Coast Guard began requiring Great Lakes-bound ships to exchange ballast water at sea in hope of preventing unwanted imports.

Congress put more teeth into the law with passage of the Invasive Species Act of 1996. Nonetheless today scores of invertebrate, fish, and plant species complicate the boating lifestyle for many of us.

The good news is that the prevention efforts are having a positive effect as no new species have been detected in the Great Lakes since 2006. Unfortunately, many have spread widely from the Great Lakes and from other areas. Zebra mussels have worked their way down the Mississippi River to Louisiana and now into Texas. Leaping Asian carp, which escaped from domestic fish farms, can be an outright hazard to boaters on inland rivers and have worked their way through locks down the Mississippi River and are threatening the Great Lakes. Sadly, the list is much longer. 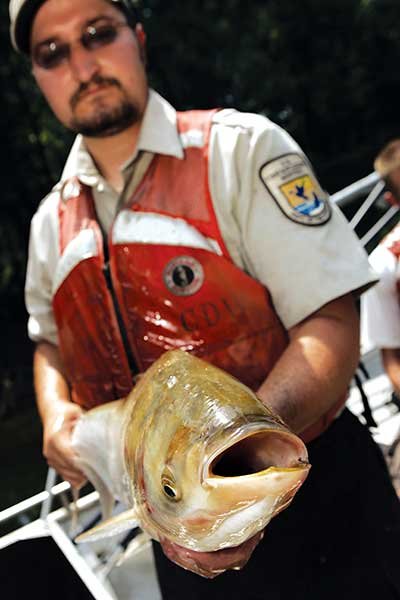 A staff member from the Big Muddy National Wildlife Refuge in Missouri, holds an Asian carp caught at the property.(Photo: U.S. Fish & Wildlife) 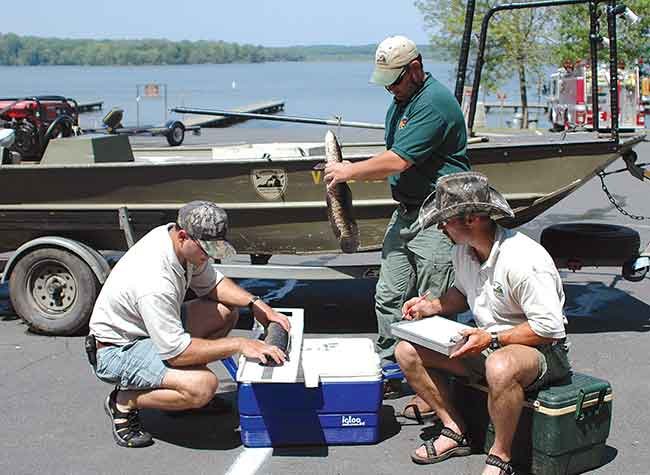 Stepped-up efforts to manage the plant and animal species already here and prevent further spread within U.S. waters relies on state natural resource agencies working with NOAA, which has the lead in coastal waters, and the U.S. Fish and Wildlife Service at the helm in freshwaters.

"With that charge from Congress, around 2000 the Service began calling on various segments of the outdoors community to work with those state agencies as well as AIS researchers to devise practical strategies and hands-on actions that could short-circuit the spreading," reports BoatUS Government Affairs manager David Kennedy. "From the outset, BoatUS represented recreational boaters among stakeholder groups that proved as diverse as anglers and duck hunters, seaplane pilots, tropical fish collectors, and water garden hobbyists. The aim was to devise practical procedures that each group could take to prevent further spread."

What came out of these efforts, Kennedy went on to explain, were voluntary guidelines for each activity area and, for boaters, a reinforcement of the existing "clean, drain, and dry" routine, bolstered by the now-familiar "Stop Aquatic Hitchhikers" education campaign.

"Studies have shown that boaters and anglers understand what's at stake in their home waters," he noted, "and that they are willing to take the time to clean, drain, and dry their boats, trailers and gear once they understand the 'why' and the 'how' of the battle.

"As a stakeholder in the U.S. Fish and Wildlife Service efforts, and a partner in the Stop Aquatic Hitchhikers campaign from the outset, we've insisted that preventive measures work for boaters as well as for the environment."

Why Do We Care?

Aquatic invasive species that flourish here tend to be bullies, Kennedy notes. They threaten the diversity or abundance of native species and most often upset the ecological stability of the natural waters and habitat in any number of ways, depending on the species. The zebra mussel and the quagga mussel, lurking in Lake Erie since at least 1989 but now spread widely via ballast water or hitchhiking en masse on hulls, can colonize, then clog, water intake systems at power plants, costing public utilities billions of dollars. But both species also can quickly infest boat cooling systems and even attach, virtually unseen, to trailer components, creating more of those "pathways" for further spread aboard recreational boats.

"So while it may be true that controlling invasive species can delay your boating day due to boat inspections, hot-water power washing after you haul the boat, or recommended dry-out periods, boaters have been able to adapt and make such procedures part of the daily routine like safely fueling up, checking the boat's electronics, and reviewing weather conditions and forecasts," Kennedy said.

"Optimism" and "invasive species" are words seldom seen in the same sentence, but there is some potentially good news on the AIS horizon. Over the past three years, efforts led by the U.S. Fish and Wildlife Service, the American Boat and Yacht Council (ABYC), and BoatUS are bringing together the boating industry and the invasive species control community to find even better solutions, starting with the AIS Summit in 2015.

"The concept of the Summit was couched as looking at boat design and construction in consideration of Aquatic Invasive Species control," says Craig Martin of U.S. Fish and Wildlife, which convened the Summit. "The idea was to get the AIS community [federal and state agencies] together with the boating community, including boat/engine manufacturers, including outboards, as well as trailers and other boating components."

When these groups started talking, one of the big concerns was the ways that existing decontamination stations at launch ramps, which are managed by state agencies, are using hot water (140 F) to kill zebra and quagga mussels.

"One of the first concerns that the manufacturers brought up at the summit was 'You're putting water that's how hot through our engines?!'" Martin says. "We had really good discussions, and it has led to some simple solutions, like the need for uniform flushing connection sites where decontamination of an outboard can occur, because right now it's hit or miss."

Martin said the summit also considered new styles of boating activity like wakeboating. Wakeboats that have a bladder the operator can fill to generate bigger wakes, then empty afterward, present an opportunity to set standards, and there's been some discussion about how to deal with that. "There are filters on the market but no standards for performance," he adds.

The long-term hope is that future ABYC design standards recommended to marine manufacturers will take into consideration AIS in order to minimize the risk of spreading them.

One of those optimists is Susan Shingledecker, formerly of the BoatUS Foundation for Boating Safety and Clean Water, and now director of programs for Chesapeake Conservancy.

"Positive changes are already being made as a result of the collaboration between the industry and natural resources community. Many manufacturers are making modifications to allow boats to drain more fully, or keep water out of hard-to-drain areas," says Shingledecker, who chairs the ABYC technical committee producing a report for the boating industry to help inform boat design relative to invasive species concerns. "More complicated fixes like developing standards for decontamination equipment to ensure water temperatures do not exceed recommended and agreed to thresholds is an advancement that could benefit boats and manufacturers alike."

It's a fact of AIS life that eradication of species already here, in most cases, is virtually impossible. Thus, "Clean, Drain, Dry" is the unified battle cry to combat the spread. And it works quite well in most cases. These are simple steps that a boater can take that generally are good practices for boat care and can minimize the likelihood of transporting these species.

Boaters moving between waterways should rinse their boats and all equipment with freshwater and remove any vegetation or visible species. If hot water is available, even better. Drain all water from the boat and any bait- or livewells. Leave the drain plug out during transport. And allow the boat to dry between leaving one water body and launching in another when possible. Following these steps should prevent the spread of species to your favorites place and will make launching at places with inspection stations go more smoothly and who doesn't want that.

Decontamination treats a boat to kill and remove any invasive species that are present. One of the challenges with decontamination is, depending on the infrastructure available and the species present, methods can vary. This can leave boaters and other law enforcement leery. Where it's available, hot water can be very effective at killing juvenile zebra mussels, and high-pressure water can remove attached mussels from boat hulls. But hot water and pressure washers are not available in all areas, especially remote locations.

The Federal Bureau of Reclamation has launched a new prize competition seeking innovative solutions for 100-percent eradication of invasive quagga and zebra mussels from large reservoirs, lakes, and rivers in a cost-effective and environmentally sound manner.

Solutions may be novel treatments or approaches that build on existing treatments. They must be specific to invasive mussels without significant harm to non-target organisms, such as native mussels, or threatened and endangered species. They must already be in compliance with existing federal discharge permits and environmental protection regulations or must be implementable with reasonable modifications to existing regulations. Successful treatments must be cost-effective and scalable to large water bodies.

The multi-year challenge will consist of three stages: Stage one is a theoretical challenge now past its February deadline. It required the submission of a white paper that describes novel treatments/methods for open-water mussel eradication. Reclamation is making a total prize purse of $100,000 available to be divided among a maximum of five winners. If successful, stage two is planned likely for 2019 to provide proof-of-concept in a laboratory-scale demonstration and proof of concept of selected treatment(s) from Stage 1. Stage 3 is planned as a field-scale demonstration where the selected treatment(s) will be deployed in a small-scale, closed-system, open water environment to determine if the methodology is sufficient to produce and demonstrate large-scale mussel mortality. See Bureau of Reclamation Research and Development Office.

Ryck Lydecker is a fisherman and formerly part of our BoatUS Government Affairs team.