Dealing with Seasickness in Children 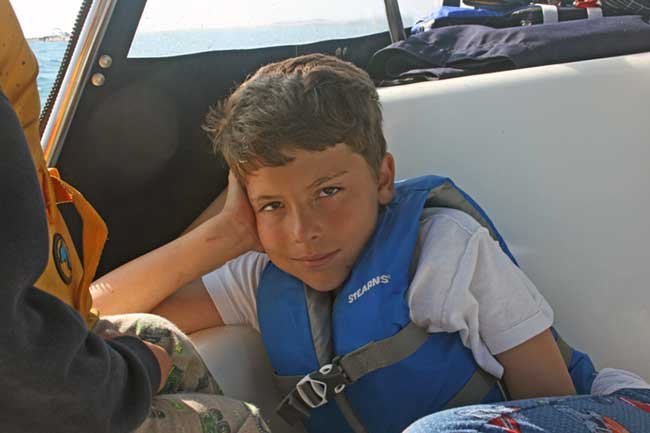 There's nothing that can make time aboard a boat worse than seasickness. Unlike adults, your options for dealing with it can be more limited, as many drugs are not approved for young children (especially kids under four years old) and many boaters wouldn't carry them if they were. While we're not against using prescription (or over-the-counter) medications for our children, there are many things that can be done long before that point to mitigate or even eliminate the need for them. After nearly 14 years of raising our children aboard, here are the things that have worked for us.

The first step in keeping your child from vomiting is to be prepared long ahead of time, long before you leave the dock. Vomiting means nothing worked. Even so, there are steps to help minimalize your child becoming sick again which are also discussed below. So, to get a handle on seasickness, here is where you start:

Before Leaving The Dock

What To Do If They Are Showing Signs of Being Ill

If They're Going To Be Sick

The signs of seasickness are often in this order, though not always. It is important to catch it early on as once a child begins to vomit, or get close to it, your options are much more limited and much less effective.

Continual vomiting can be a very serious issue — especially with children. They risk the potential of becoming seriously dehydrated or even tearing their esophagus (Mallory-Weiss tear). If you suspect your child has become dehydrated or is vomiting up blood, seek medical attention immediately.

There are prescription meds you can carry to help your child, but these should be discussed with your doctor. Our opinion is that these are a weapon of last resort. We generally can get along without having to consider these — by using the methods above.

If you feel that you should carry these medications, make sure your physician understands these medications will be used on a boat. For example, Phenergan (promethazine) was one of the most commonly prescribed anti-nausea medications we've carried. It commonly is dispensed in two different forms: pill and suppository. The pill is not worth much because the child is vomiting — and once they've taken it, they cannot take it again until the time has reset ... even if they vomited it up soon after taking it. The suppository may be a better option, but it has to be refrigerated. Another option is Zofran ODT. This is similar to promethazine but dissolves under the tongue — making it a better option if your child can take it. Our only negative experience with the ODT tablets is that they appear to be more susceptible to moisture/heat than the standard tablets. We've carried all three of these, but now prefer Zofran ODT, which dissolves under the tongue.

Be aware that very young children probably cannot take either of these medications. Also, these meds will very likely make your child extremely sleepy. It is important to consider where and how they will sleep after taking these drugs. If there's a chance your child may need to take one of these medications, discuss the option of giving the drug to your child on a test basis with your physician. This should be in a controlled environment (on land) where you are close to emergency medical attention. Being many miles away from the shore (and possibly many hours from assistance) is a terrible place to find out that your child has an allergic reaction to a drug.

Discuss these and all other options (including many of the over-the-counter medications) with your physician. There are very, very few children (or adults) who cannot get over seasickness. It just takes a little time, patience, and preparation to see what works best. Most of that preparation should begin long before you leave the dock.

Brian and Christine Mistrot have been cruising Florida, Puget Sound, and the Gulf Coast since their children, ages 16 and 12, were born.

Brian and Christine Mistrot have been cruising Florida, Puget Sound, and the Gulf Coast since their children were born.