BoatUS CAT Team is on the Scene

BoatUS has nearly 50 people helping with the salvage and recovery process in hurricane-ravaged areas of Florida and Texas. 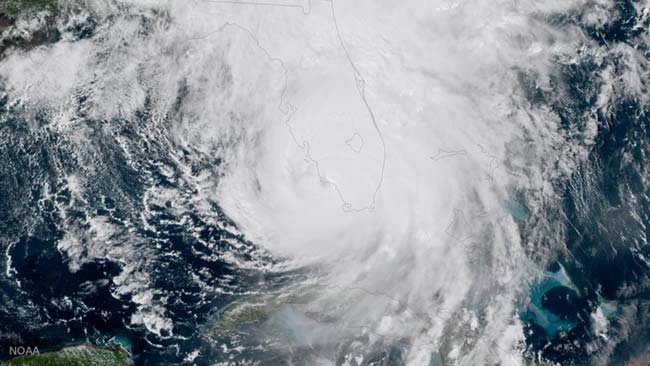 The satellite shot is of Irma rolling over Florida. (Photo: NOAA)

The massive one-two punch, from hurricanes Harvey and Irma, and the long, hard road to recovery in Texas, Florida, and beyond, continues to unfold. Many of our BoatUS insureds in each of these states have sustained damage to their boats. Our BoatUS Marine Insurance Catastrophe (CAT) Team was the first marine insurance team on scene in Texas. They arrived in Texas within 48 hours of Harvey's August 25th landfall and worked diligently to coordinate salvage and evaluate damage to our insured boats. Many of these claims have already been settled, with our team continuing to work on complex salvages and settlements. As of this week, CAT team members were still finishing up claims in Texas.

As Hurricane Irma was rapidly approaching Florida, a second CAT team was called to action. Team members began their trek into Florida as the remnants of Hurricane Irma were still wreaking havoc northward. Irma came ashore in the Florida Keys on September 10 as a Category 4 hurricane, and the massive storm simultaneously raked both coasts of Florida. Once again, many of our insured boats sustained damage as a result of the storm.

Our CAT Team's approach to these disasters was created in 1983 after Hurricane Alicia devastated much of the Texas Gulf Coast. The BoatUS team includes professional surveyors, claims processors, transportation providers, professional towers, and crane and barge operators. Upon arrival on scene, all immediately get to work assessing salvage needs and damages to our insured boats and work to promptly settle claims. 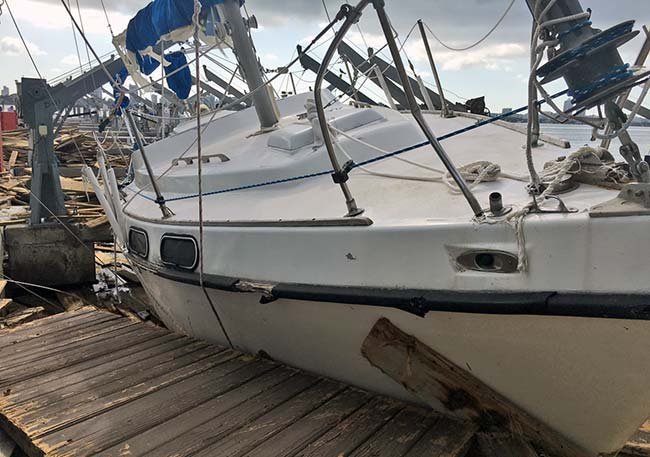 While our CAT teams, made up of nearly 50 members (the largest ever for BoatUS), methodically work to survey and salvage our members' damaged boats, local TowBoatUS crews across the state also helped, along with local salvage firms contracted by BoatUS These have been long days as the team continues to work until every boat is inventoried and every claim processed.

Along the Miami coastline, for example, the CAT team found marinas and mooring fields battered and in disarray, with dozens of boats sunk and scattered along the shore, sitting in front lawns or dropped into koi ponds, some lifted and carried more than a hundred feet onto shore, and at least one near the goal post of a football field.

Each boat claim is different, as is the extent of damage. Some boats are wedged into difficult-to-access spots like dense mangroves or underneath docks, while others are 10 feet under water or splintered into pieces that make it difficult to identify the HIN number for that specific boat. 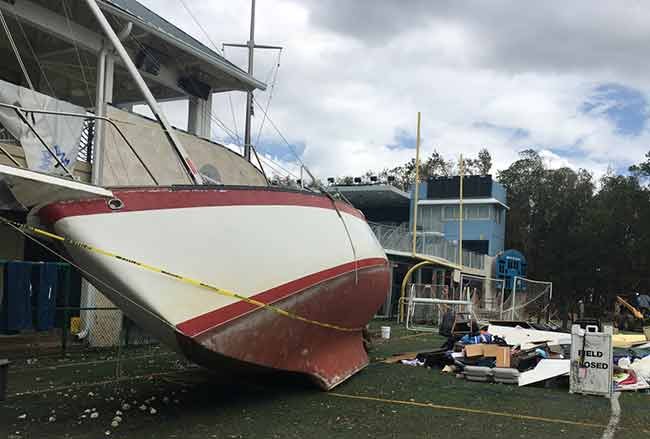 "Generally speaking, if you can find a difficult predicament, we have a boat there," says Mike McCook, the Field Operations Manager for the CAT team.

After an insured contacts BoatUS to file a claim on his or her boat, a CAT Team member works to track down the boat, determine whether salvage is necessary, inspect the boat, and notes whether it's a total loss or can be repaired. A BoatUS sticker is then placed on the boat with a claim number, the surveyor's name and date of the inspection, and the BoatUS phone number. This lets other salvors know this boat claim is being addressed by BoatUS, and helps the owner connect with BoatUS if our team finds the boat first. 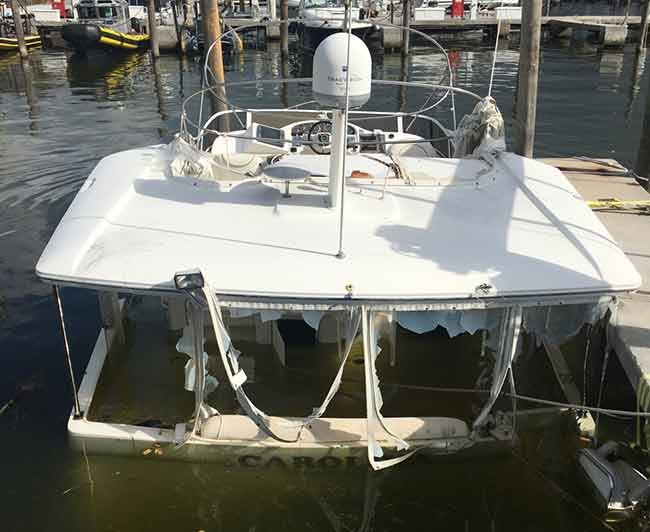 Throughout the devastated areas of South Florida, the CAT team found boat owners searching for their boats, which in many cases were no longer where they left them to weather the storm. Among them was boat owner Bob Robinson. Despite his best efforts, Irma destroyed the Hunter sailboat he had owned for 10 years. Robinson, a resident of Pine Key, made the decision to head north to find a safe place for his boat to ride out the storm. He chose to moor his boat at Dinner Key on Miami's south side, removed all the canvas, taped up the hatches, doubled up on all the lines, and took everything he could off the boat.

Gazing down at the shattered pieces trapped against a seawall, he was heartbroken. "I tried to do everything right, but another boat broke free and smashed into mine and they both ended up here."

BoatUS is now processing Robinson's claim. Our CAT team can attest that regardless of how an owner secures his boat, in certain situations the boat is at the mercy of Mother Nature. 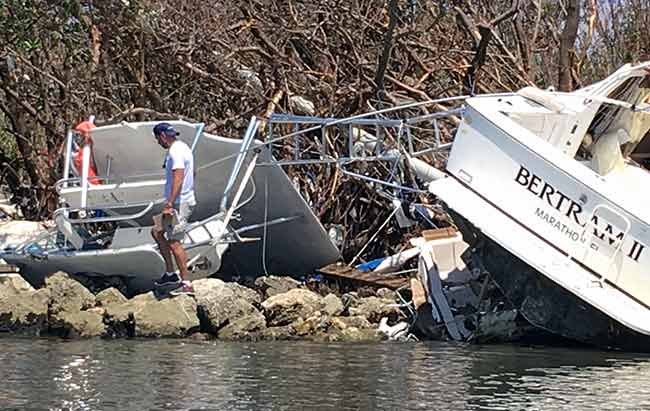 When Hurricane Sandy rolled over New York and New Jersey in 2012, about 65,000 boats were damaged. There are nearly 900,000 registered recreational boats in Florida. The total economic loss from boat damage won't be known for months, says Scott Croft, vice president of public affairs for BoatUS.

"It's unfortunate that two such large storms hit our country in such close proximity," said BoatUS CEO Kirk La. "But our company was ready. We dealt with them, and as always, the experience makes our insurance and CAT teams even stronger for our insureds."

Earlier this week, CAT team members gained access to the lower Florida Keys, which had been blocked to vehicle traffic by damage and debris. The team will continue to work on site across all of these affected regions until all our insureds claims are processed.