Relinquishing ongoing decision-making to a bunch of microprocessors can lead to an embarrassing grounding — or worse. 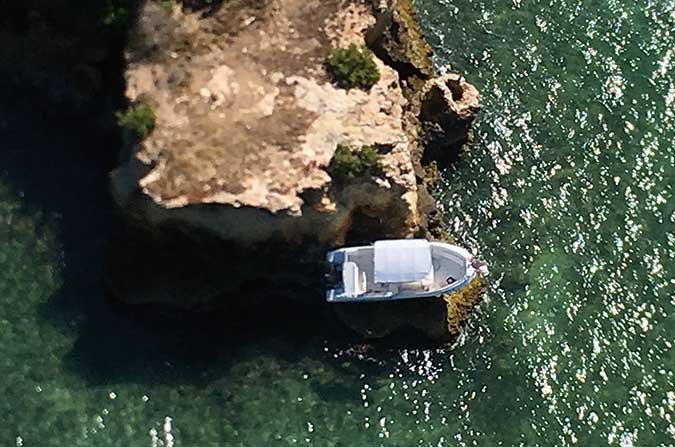 Driverless cars are all over the news lately, and we're all being promised they'll make accident-prone human drivers obsolete. If you're reading this 20 years in the future, you're probably (a) thinking, "Boy, did they get that wrong;" or (b) relaxing in your robo-car while it whisks you to work at 100 mph.

But boats in some ways are even farther along the driverless path than cars. Without roads, traffic lights, and pesky pedestrians, skippers can pretty much punch a few buttons and get from waypoint A to waypoint B along some pretty complicated routes without paying much attention. Therein lies the problem. Collisions, allisions (hitting something stationary like a day mark), groundings, and personal injuries have all been the result of what's become known as "video-game syndrome."

While plenty of boaters are old enough that they've never played a video game, they still have no problem letting the colorful displays, knobs, and joysticks distract them from what they should be doing — piloting their boats.

A quick YouTube search will show a 50-foot motoryacht named Nap Tyme cross the path of a 273-foot ferry named Chetzemoka in Washington's Puget Sound, even after the ferry blew five long warning blasts. The recreational boat runs headlong into the ferry's starboard side, knocking the smaller boat sideways. Accident investigations found that both the private boat operator, who was below deck while the boat was on autopilot, and the ferry captain, who was judged to have been too slow to take corrective action, contributed to the collision.

What happened was that Nap Tyme was perfectly capable of maintaining course and speed and even showing dangers on a chartplotter and radar. But without a human backing it up, the boat was bound to run into something. Fortunately, no one was hurt, but had the timing of the collision been a little different, the outcome could have been much worse.

For all of their incredible processing power and neat tricks, a boat's electronics are narrow-minded. They only do what we tell them. More and more, BoatUS Marine Insurance is seeing claims related to letting electronics take command. We've analyzed some of the BoatUS claims and even spoken to a few willing, if embarrassed, boaters, and found three categories for these claims.

Add colorful 3-D icons of a boat with chart, bathymetric, and radar overlays, and even sounds, to the usual array of depth sounders, knotmeters, wind-indicator instruments, engine gauges, and a VHF radio, and what do you get? Information overload. Skippers can get so caught up watching the colorful video voyage that it's easy to forget to look up.

A skipper in New York, who recently spent a lot of money on an integrated navigation system for his 43-foot cruiser, told us, "My wife used to refer to the boat's nav system as my $10,000 video game. After I bent both props and rudders on some rocks while showing her how the system worked, she started calling it my $20,000 video game."

Navigation equipment is designed to be easy to use, and some of them are downright fun. Joysticks, once found only in video games, are now all over navigation gear. And while all of these devices can make piloting interesting and less tiresome, they can't substitute for a human watching the horizon. Plus, it's the law. Rule 5 (also known as the "lookout rule") of the COLREGS says "[e]very vessel shall at all times maintain a proper lookout by sight and hearing as well as by all available means. ..." (See "Keeping A Proper Lookout" for more on the legal requirements of Rule 5.)

The Limitations, Inaccuracies, And Failures Of Electronics

Your GPS is probably capable of locating your position to within about 10 feet. That accuracy has surprised some skippers when they set a waypoint to a marker or buoy and then smack into it. And while it's good to know your equipment knows exactly where you are, it can fail.

In one BoatUS Marine Insurance claim, a sailboat was motoring next to a bridge on autopilot when something — maybe the metallic structure of the bridge or the nearby powerlines — caused the brains of the autopilot to make a sudden hard turn that made the boat strike a small fishing boat near the bridge before the skipper could gain control. The skipper's comment that it was the boat's fault fell on deaf ears to the responding officer, and the man was cited.

Another problem with the accuracy of GPS is that the chart used with it may be many years old. One skipper who was piloting a shallow channel was surprised to see his GPS show his boat to be about 200 feet inland. Had the autopilot been interfaced with the GPS, he would have found out quickly how far off he was. The lesson here is that if your eyes don't agree with your electronics, stop until you can figure out why.

A few years ago, a 37-foot powerboat ran over a 19-foot fishing boat on Lake Michigan, killing one man — in daylight, with calm seas and unlimited visibility. How? The skipper set a waypoint and left an experienced friend at the helm while he went below to look at the chart to find the nearest fuel dock. The boat was on autopilot when it ran over the stern of the fishing boat. The blame can't be laid on the autopilot, which was doing exactly what it was designed for, keeping a steady course. The man at the helm couldn't explain why he didn't see it. According to one of the men in the small boat, he'd been heading toward them for a couple of miles. The owner of the larger boat, who'd set the autopilot and was navigating, was convicted in the death of the lost fisherman.

Most accidents aren't nearly so serious. Other claims started with a quick trip below to fetch a camera, binoculars, or to find a chart, and ended with a grounding or collision. "I was only down for a minute or two," was the explanation in most cases. But keep in mind a boat traveling at 30 knots will travel a mile in just two minutes. At the risk of stating the obvious, a boat needs to be under human supervision at all times. Not only is it common sense; it's the law.