Manifolds and risers are some of the less-discussed "consumables" on your boat. But when they corrode internally, they often destroy the engine. 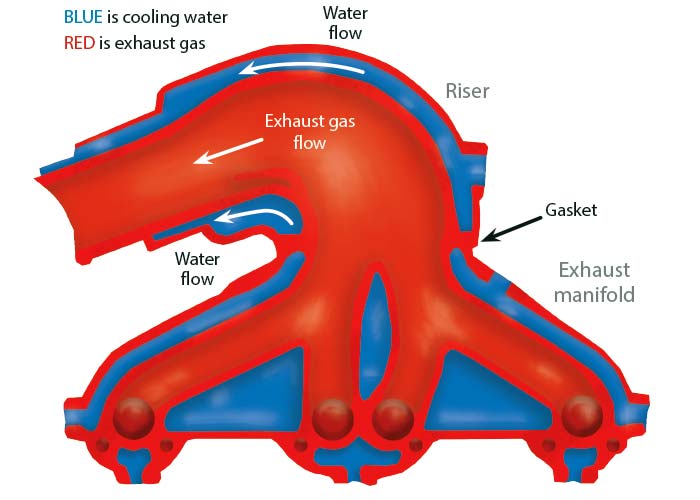 Nearly every inboard and inboard/outboard (I/O) engine has exhaust manifolds and risers. But ask most people about the life span of these essential components, and you're likely to get responses ranging from "a few years" to "forever."

Ponder for a moment that something made of iron on your boat is exposed to hot, acidic exhaust gas and seawater, and you begin to realize that even "a few years" may be too long. In reality, boats operating in Florida may get only two or three years out of risers and not much more from manifolds, while those in Maine may get five or six years. Boats in freshwater areas can get a few years more — maybe.

It's the "maybe" part that's a problem because manifolds and risers don't have an expiration date or a warning light to tell you when they're failing. And when they fail, they can destroy the engine. Damage to gas engines is far more common, so that's the focus of this article.

Exhaust manifolds and risers are large metal castings that carry hot exhaust gases away from the engine on inboard engines. All V-8 and V-6 engines, for instance, have a separate exhaust manifold along the side of each cylinder bank. The riser, which is often shaped like an inverted U, is located at the aft end or centered on top of the manifold. Sometimes the riser slopes down from the end of the manifold, if the engine sits high enough above the waterline, in which case it's often called an elbow. The exhaust hose is then attached to the aft end of the riser or elbow.

What makes these cast-iron parts unique is that they're pipes within another pipe. This double-wall arrangement allows hot exhaust gases in the internal pipe to be surrounded by water in the external pipe, called a water jacket, which should remain cool enough to touch. At the aft end of the riser, water from the water jacket combines with and cools the hot exhaust gases before continuing out the exhaust overboard discharge. Without the cooling effect of the water, the exhaust gas would overheat the manifold and risers, then burn through the exhaust hose in short order. 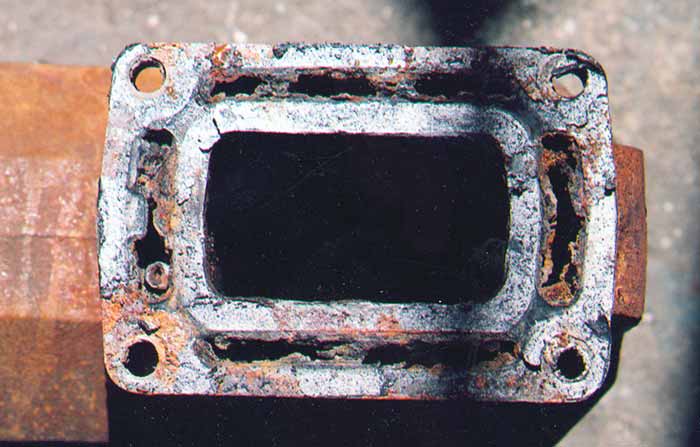 Corrosion between the water and gas passages may let water into the engine, which can destroy it. (Photo: BoatUS Insurance Files)

Keeping the water and exhaust gases separated until they exit the riser is crucial. If water finds its way into the gas-only chamber before the end of the riser because of a leak in the water jacket, it can seep into the cylinders when the engine is at rest and either seize the pistons with rust or create a "hydrolock" condition. This happens because water cannot be compressed in the cylinders, so the engine suffers massive and sometimes irreparable damage when you try to start it. Both result in the premature death of your engine.

Why do these heavy iron castings fail? Manifolds and risers live in a harsh environment. They must endure very hot gas containing corrosive acids traveling at high velocity. They are exposed to saltwater and vibration, then left idle for long periods while rust and corrosion eat away at the metal and clog water passages. It's a wonder they last as long as they do.

Reducing The Odds Of Failure

The warning signs of a potential manifold or riser failure are elusive. Hard starting and an unfamiliar knocking sound on starting are two signs of a leak, but by then the damage is usually done. When the water jacket of a manifold or riser becomes clogged with scale and corrosion, a leak is usually close behind because the internal walls are deteriorating. Suspect this if the engine overheats at high speed or under a load, though overheating may also be caused by a damaged impeller, clogged raw-water filter, or restricted raw-water intake screen, for example.

Rust on the outside of a manifold or riser often means damaging rust on the inside, too.

Sometimes it's possible to detect hot spots by comparing the temperature of two risers by putting your hand close to the metal. If one seems relatively hot, it may be an indication that the water passages on that side are clogged. If each side has an independent exhaust hose, you may also notice less water exiting the exhaust discharge. Note that the engine-temperature gauge may not indicate overheating when idling at low speed. However, all things being fairly equal on V-block engines, if one side becomes clogged, the other is usually not far behind. A more scientific approach is to hire an engine surveyor, who can use an infrared pyrometer to determine temperature variation in cast-iron exhaust parts. Plus, you profit from the surveyor's experience.

Another more visible sign of trouble is corrosion at the joint between the manifold and riser, which means the gasket between them has failed. If water is seeping outside the joint, there's a high probability it will soon leak along the inside joint to the gas-only chamber, if it hasn't already. Don't wait for confirmation on this. In fact, the best policy is to not wait for any warning sign at all, but to periodically remove and inspect the risers, and possibly the manifold, depending on what you find. A rough guide for inspection is annually, after three to five years in saltwater, and biannually in freshwater. If you see signs of corrosion on the outside, it's past time.

What To Look For

The good news is that a riser is usually not that difficult to remove for those inclined to do it themselves. Only a few bolts hold it to the manifold, and the exhaust hose is held on by a few hose clamps. Once off, you'll be able to see if all the water passages are open or clogged.

Take a large flat-head screwdriver and dig around for corroded metal that's easily removed. If you hit solid metal right away, it's probably OK, but if large chunks flake off, replace it. There should be no evidence of rust in the gas-only chamber on the side that connects to the manifold (expect to see black carbon). If there's rust, water is probably leaking in through a hole in the water jacket at the upper loop of the riser.

Also look carefully at the metal faces where the manifold and riser join together. Because the walls of these faces are fairly thin to accommodate the water passages, the gaskets tend to deteriorate and develop leaks at the narrowest sections. Sometimes water seepage can be seen outside the joint, as noted above. If the metal face is pitted on either the manifold or riser, replace it or have the surface machined smooth again; otherwise, it will probably leak again, perhaps inside the gas-only chamber.

If you replace the risers (always replace both at the same time), you need to decide whether to also replace the manifolds, which are both more costly and a bit more difficult to remove. Replacing a riser or manifold typically costs several hundred dollars each, but failure to replace them when needed could cost thousands in engine damage. Any sign of rust in the gas-only chamber indicates a leak, which obviously warrants replacement, but it's more difficult to inspect the interior of a manifold.

Risers tend to fail before manifolds because the water is hotter when it reaches them. This accelerates corrosion and causes the salt to separate and stick to the walls more readily. Also, the top and aft sides of the riser are exposed to both saltwater and air where the two combine — a perfect environment for corrosion.

Unfortunately, there's no practical, conclusive method to evaluate the internal condition of manifolds. They can be removed, cleaned, and even pressure checked, but there's no guarantee they won't develop a leak soon after. In the end, you may have to weigh the cost of replacing an aging manifold against the cost of a replacing the engine if it fails.

Another option, possible on some engines, is to convert your raw-watercooled engine and manifold with a freshwater cooling-system conversion kit. This will increase overall engine life, and you won't have to worry about raw-water corrosion in the manifold. Risers, however, are always raw-water cooled, so they will still need to be inspected regularly.

A word of caution: Exhaust hoses disconnected from the riser provide an open path to the outside. They must be plugged and tied securely above the waterline to prevent water from flooding the boat.