When it comes to buying a tow vehicle, the gap has narrowed between tow capacity and fuel economy. Many new models offer both, but there are some trade-offs. 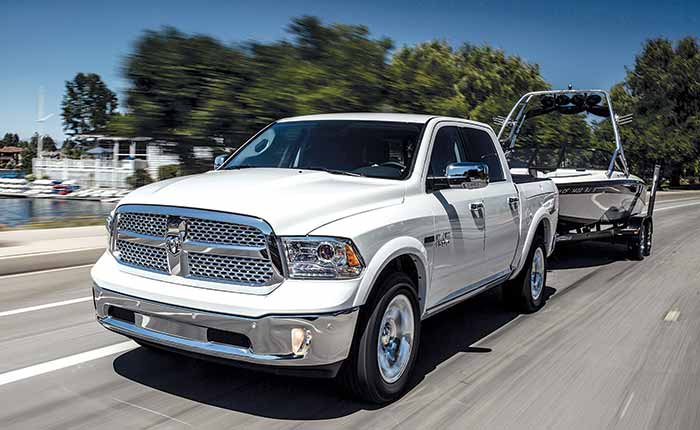 The Ram 1500 with V-6 EcoDiesel engine gets 29 MPG highway and 21 city, a rarity for midsize pickups.

Here's the money question: Is it possible to find a towing vehicle that is strong enough to haul your boat and trailer and at the same time be economical to drive every day? Until a few years ago, the answer was probably no. Your choices were limited to either a gas-guzzler or a dirty diesel. Today's new engine technologies provide better mileage and reduced emissions, and there are even some alternative power options to consider. Among the 2017 vehicles, you'll find a variety of classes, towing capacities, engine types, and price categories. 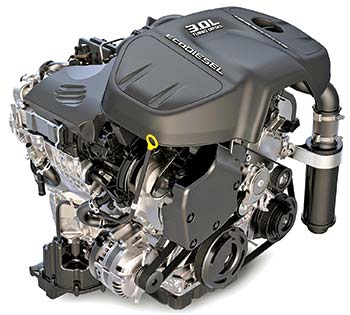 Gone are the stinky black emissions that most people associate with diesel. Modern diesel engines, like the optional EcoDiesel on some Ram and Jeep models and the available Duramax I-4 Turbo Diesel from Chevrolet/GMC, are low-emission due to the plethora of after-treatment equipment installed, including a diesel-oxidation catalyst, which minimizes carbon monoxide; a selective catalytic reduction system, which reduces nitrous oxide; and a diesel-particulate filter, which collects and extinguishes soot.

For moving heavy loads, diesel is generally considered best — both because of the higher torque generated to get things rolling from a stop as well as lugging up hills and for the increased mileage per tank of fuel. (Diesel is more energy-dense than gasoline; i.e., a gallon of diesel contains 13 percent more energy than a gallon of gasoline. In simple terms, this means a diesel engine uses less fuel than a gas engine to perform the same task.) And because of the way diesel engines combust fuel — much higher compression is needed to ignite diesel fuel than gasoline — diesel engines are built sturdier than gas engines, so they tend to last longer. And because of the higher torque, you'll see less of a drop in your overall MPG when towing a maximum load, as compared to a gas engine. But the great benefits of diesel-equipped models are generally accompanied by higher price tags than those found on gas-powered vehicles. 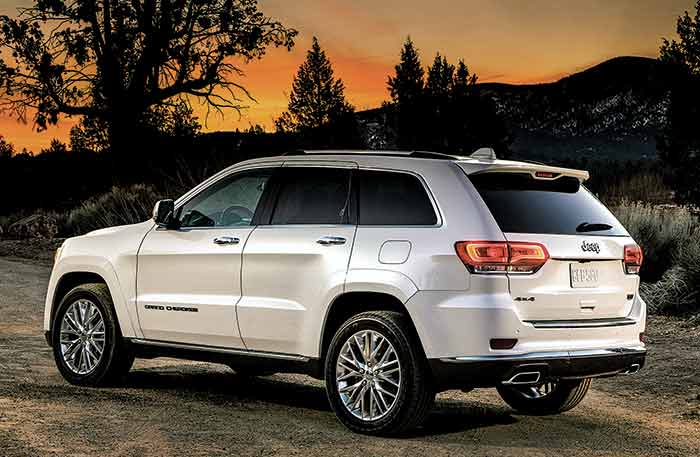 The EcoBoost engine found under the hood of some Fords is smaller, cleaner, and more fuel efficient — and it acts more like a diesel — than its traditional gas-engine siblings. Like diesel engines, fuel is injected directly into the cylinders, and higher compression ratios build more low- to mid-range torque for easier starts and greater ability to move bigger loads. However, this turbocharged engine experiences a 40- to 50-percent drop in MPG once a maximum-load trailer and boat are attached, which means you'll see the savings during daily driving, not while hauling. 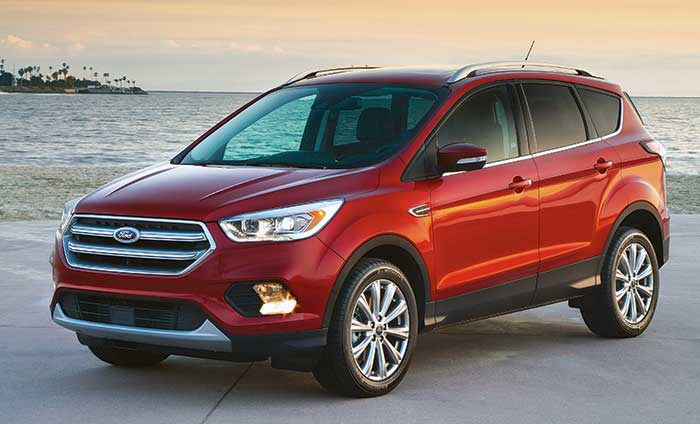 For more than half a century, Subaru has approached fuel efficiency from a different direction. Its Boxer engine — named for the horizontal movement of the pistons, which looks like boxers throwing punches — is built for efficiency. The engine's flat layout (instead of the more-common V setup) lowers the center of gravity and allows output to flow directly into the transmission, which reduces engine components and inefficiencies. This translates to better fuel economy. The Boxer doesn't offer as much in the way of horsepower or torque as the EcoBoost, but it can still haul a small boat or a couple PWCs.

In general, expect around a 30-percent drop in average MPG when towing with a gasoline engine, though that may vary significantly depending on terrain, weight and height of load, and the driver.

Horsepower is a measurement of work capacity; 1 hp equals 33,000 pounds-feet per minute. This is calculated as the energy it takes to move a 330-pound object 100 feet in 1 minute. Horsepower comes into play at higher RPMs when the vehicle and load are already in motion, such as for maintaining speed or passing.

Torque is the measure of force applied to produce rotation motion. In other words, it is the low-end power needed for moving the vehicle and load from a stop or up steep hills. The heavier the vehicle or load, the more torque that's needed to move it. The engine creates torque and uses it to turn the crankshaft, which is linked to the transmission. The transmission gears convert torque so the vehicle can tow safely.

Hybrids, as the name implies, have two engines under the hood: a battery-powered electric-drive system and a gasoline-powered internal-combustion engine. The electric motor increases the vehicle's fuel efficiency while decreasing carbon emissions, which makes these vehicles more environmentally friendly, an increasingly growing preference for drivers. 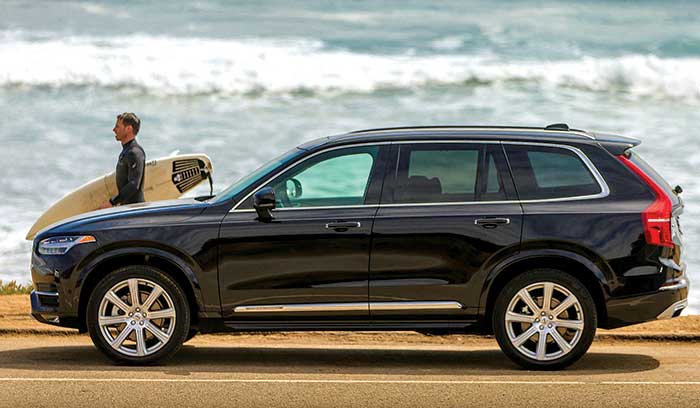 The Volvo XC90 T8 hybrid packs a lot of towing power for a midsize SUV.

The trade-off with hybrids is that while they're very efficient for tooling around town, they work off the gas engine exclusively when hauling, so you don't save anything on fuel costs while towing a load. The reason, explains Brett Becker, editor and publisher of onlinetowingguide.com, is that unlike either straight combustion or all-electric vehicles, hybrids have to accommodate two separate engines into their designs, which leaves room for only a small electric engine that doesn't have enough power to assist for towing. "This is the nature of electric motors themselves," says Becker. "The greater the load, the more heat it generates. The more heat, the more resistance that's created. The more resistance, the more rapid the power drop." So, basically, when towing with a hybrid, "the load on the electric engine becomes so great that the engine isn't capable of handling it." And that's when the vehicle switches to its internal-combustion engine.

The only factory-built fully electric car with a towing package is the Tesla Model X. Outfitted with 20-inch wheels and tires, the Model X can tow up to 5,000 pounds with an incredible 532 horsepower and 713 lb-ft of torque.

So why can this electric-online engine tow better than a hybrid? "The Tesla Model X is all engine," says Brett Becker, editor and publisher of onlinetowingguide.com. "You don't have to try to fit two engines [an electric and an internal-combustion] into it like in a hybrid."

The trade-off? Various testers have commented that towing reduces the 257-mile range per charge by half, so you'll need to limit your trips to around 100 miles round-trip or ensure there's a charging station en route. Another downside: Cables at towing stations are too short to reach when you have a trailer attached, so instead of backing in, you'll need to park across spaces, which is an electric-car etiquette faux pas.

Engine type is only one of many factors to consider when choosing your tow vehicle. As you search, you'll need to know the total weight of your trailer, boat with engine, gear, full fuel/water tanks, and people you plan to carry in the cab of your vehicle while towing. You'll also need to calculate your trailer tongue weight and ensure you have the right equipment installed on your vehicle to haul the maximum recommended weight. Slapping a hitch on your vehicle without all of the other factory-recommended towing equipment (e.g., heavy-duty hitch receiver, wiring harness, engine and transmission coolers, upgraded radiators and suspension, larger-capacity battery) is not only dangerous; it may also void your warranty. 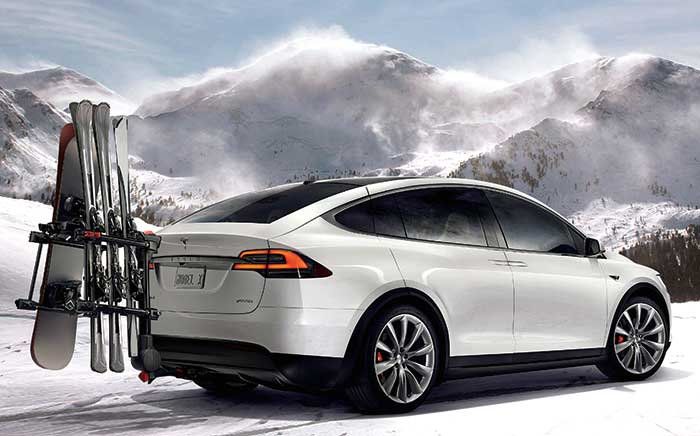 The 2017 Tesla Model X is the only all-electric vehicle that comes with a manufacturer-installed tow package.

Another decision you need to make is whether you need two-wheel drive, four-wheel drive, or all-wheel, depending on the terrain and launch-ramp conditions. Becker suggests that while 2WD offers the best fuel efficiency and slightly higher towing capacity, 4WD or AWD are better choices for negotiating slippery boat ramps often found in areas with a high tidal variance. If you choose a 2WD vehicle, it might be a good idea to stump up for a limited slip differential, if one is offered as an option. See chart of new vehicle models.

Finally, check the laws for all the states you plan to tow in to ensure your vehicle and equipment comply. Go to onlinetowingguide.com/towing_laws.html to access Becker's detailed list of state towing laws.

Stacey is an award-winning marine journalist and photographer who, as BoatUS Magazine's managing editor, handles some of the national publication’s most complex features, as well as keeping it on time, accurate, clear, and timely. Stacey also manages the magazine’s active website and social-media engagement, and is part of the BoatUS video team, helping to produce more than 30 how-to videos a year. Stacey recalls that one of her earliest memories in life includes being hung by her ankles in the engine compartment of her family's 1963 Egg Harbor, helping with repair work and searching for lost items. Her love of boats may only be matched by her love of horses; she spent 20 years writing, editing, and photographing for equestrian magazines and books — including Practical Horseman