How BoatUS Handles Hurricane Claims: One Boat At A Time

After a major hurricane like Irma, there's a lot of work getting boats back to their owners and repaired. Here's how the process works. 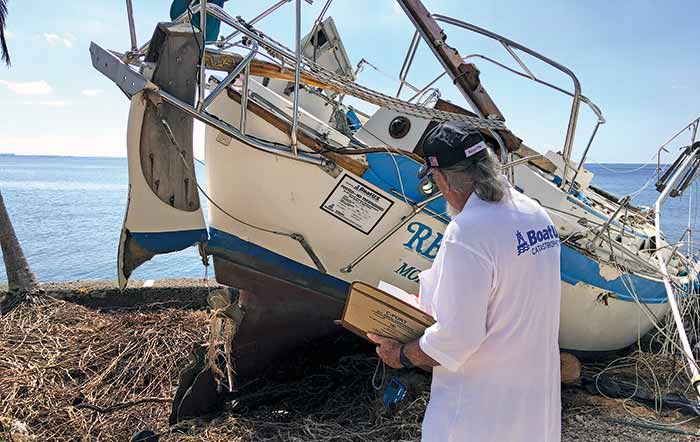 After a hurricane or other natural disaster, the BoatUS Catastrophe Team is deployed to find, survey, and salvage our insureds' boats, as well as begin the claims process. This sailboat was found washed ashore near Miami during Hurricane Irma.

During the early morning hours of September 12, 2017, four large RVs and an SUV from the BoatUS Catastrophe (CAT) Team departed Alexandria, Virginia, headed to Florida, driven by BoatUS employees and packed with supplies necessary to sustain surveyors and claims adjusters for weeks.

Just 48 hours before, on September 10, Hurricane Irma had made landfall at Cudjoe Key in the lower Florida Keys as a Category 4 storm with 130-mph sustained winds. The scene in southern Florida was chaotic; power was out, roads and buildings were damaged, there were gas shortages, and no one knew yet how many boats were damaged. One thing was certain: As in years past, BoatUS would likely be the first boat-insurance company to begin the process of finding, salvaging, and handling the claims for thousands of damaged boats, often before owners even knew where their boats were.

To be ready for disasters like this, each year, the BoatUS Marine Insurance team engages surveyors, towers and salvors, truckers, and auction companies across America's hurricane zones, to ensure that they are committed to assisting us should deployment of our CAT Team become necessary. Once a storm makes landfall and boats are piled up, washed ashore, and submerged, this preplanning allows us to start assisting our insureds as soon as it is safely possible.

In the case of Irma, eventually the CAT Team would spend months rescuing boats and investigating and settling claims. While many of these boats would be repaired, many were destroyed beyond repair, some sank, and many more had significant enough damage that they were declared a constructive total loss (CTL). After a disaster, CTL designations are usually given to boats after the CAT team provides an estimate in the field for repairs that exceed the boat's insured value. A boat that appears relatively undamaged may, in fact, have been sitting underwater for days and have extensive damage.

Once a boat is dubbed a CTL, the insurance company sends appropriate settlement documents to the owner, and in return receives the boat's ownership papers. While owners usually have the option to buy back their boats at salvage value, most choose not to. Even if they don't, the boats may still have a bright future. Mike Costa is a broker for Certified Sales, a company that finds new homes for boats that the insurance company deemed not cost-effective to repair.

"Once the insurance company has declared a boat a CTL, we're given an assignment to the boat, which gives us the authority to pick it up, move it, auction it, store it, and work to sell it," he says. The vast majority of CTL boats get sold; only 1 or 2 percent aren't. Those get stripped, chopped up, and disposed of. The buyer of a salvaged boat then titles and registers it. But the next step is the most daunting: repairing it to make it seaworthy again. Some boats have gaping holes in the hull or deck, some were submerged, some were pounded relentlessly for hours, with resulting serious structural damage, corroded engines and wiring, and shredded gelcoat.

Some CTL boats go to boatyards that repair them during the slow season to keep employees busy. Some companies buy several, load a container, and ship them overseas where labor is cheap. Others are sold to starry-eyed buyers looking for a bargain.

For those boats that are not deemed to be a CTL, the process is much the same as any other boat damaged in a non-storm event. A surveyor or adjuster is assigned to document the damage and write a damage appraisal detailing necessary repairs. In many cases, settlement checks are issued based on these damage appraisals, then boats are moved to repair facilities for estimates, and eventually repairs are begun.

Part of the job of the BoatUS CAT Team is to investigate ways that boats were prepared (or not) for the storm and pass on those lessons. After 34 years of sending our CAT Team to hurricane ground zero, the body of knowledge grows and allows us to pass along what we've learned to our members so that the next time, hopefully, there will be fewer boats that go the CTL route and more that continue to give enjoyment to their owners.