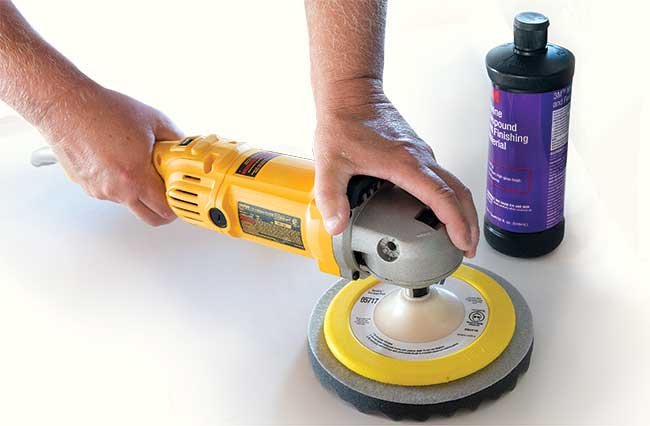 No matter how careful you are, fiberglass boats collect dings and gouges over time. Many of these are minor and limited to the gelcoat — that smooth, shiny outer layer of the fiberglass layup. Shallow scratches can often be wet sanded and buffed out. But when larger cracks and gouges form, they need to be filled. In most cases, scratches in gelcoat are purely cosmetic and don't affect the underlying integrity of the actual fiberglass, but you'll still want to address them to prevent moisture from migrating into the laminate as well as to preserve the appearance of the boat.

Many owners shy away from gelcoat repairs thinking it's a complicated and difficult project. But with the correct tools and materials, the right attitude, and a little time, professional-looking repairs are within reach for the average boat owner.

Before getting into the actual repair, it's important to understand what gelcoat is. Gelcoat is the first thing sprayed into a female mold when a boat is built, usually to a thickness of .5 to 1 mm. Depending on the method of construction, layers of chopped mat and fiberglass cloth are then built up on top to form the hull, deck, and other molded parts. When the parts are taken out of the mold, it's the smooth, now outside layer of gelcoat that you see. Gelcoat doesn't fully cure when it's exposed to air, but because one side is against the mold and the other is covered by fiberglass and resin, air is excluded, and the gelcoat cures to form an impervious barrier between the water and laminate.
As mentioned, gelcoat has to be sealed from the air for it to harden properly. Otherwise it will stay tacky to the touch. For this reason, you'll often see "waxed" and "nonwaxed" gelcoat for sale. Gelcoat that has wax added will fully cure; the wax rises to the surface after application, sealing out the air and allowing it to cure. Nonwaxed gelcoat can be used when several coats are required, but that means having two different kinds of gelcoat on hand. The simpler way is to always use the waxed kind, lightly wet-sanding the cured surface between coats.

As with all repairs, preparation is key. Just slapping on some gelcoat will give disappointing results as well as look unsightly, and the repair will probably need to be redone within a year or two. It's better to do it right the first time.

If this is your first time repairing gelcoat, start with a fairly small repair in an inconspicuous place. Gain confidence before moving on to more visible spots on the boat.

Seaglass, my Grand Banks 32, had a small crack in the top of the forward cabin trunk that needed repairing. Here's how I did it. 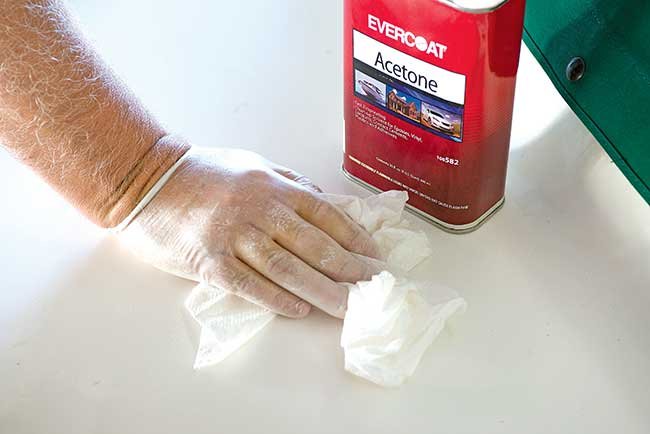 1. Start by wiping down the area to be repaired with acetone to remove surface dirt, contaminants, and any surface wax that might interfere with the bond of the new gelcoat. 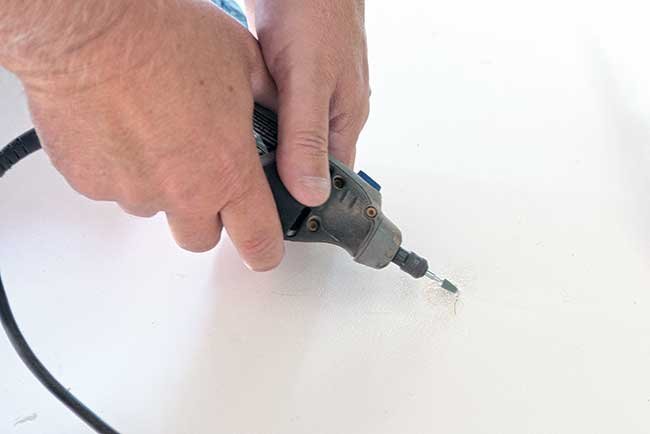 2. Open up the crack a bit to give the repair the best chance of seamlessly blending into the existing gelcoat. This can be done using a sharp wood chisel or scraper; I prefer to use a Dremel tool fitted with a burr bit. If you start cutting into the laminates, you're going too deep. 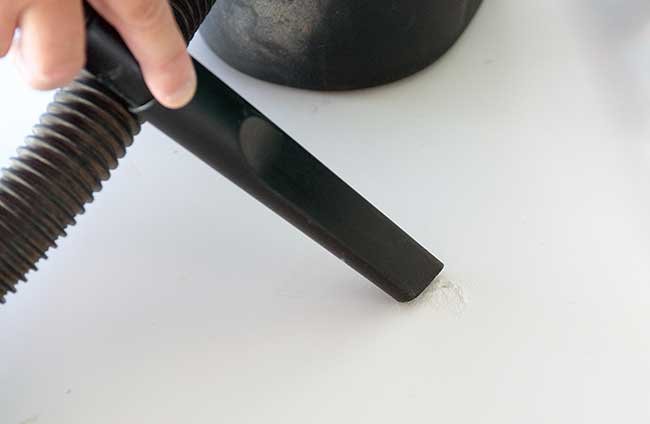 3. It took about five minutes to create this V-shaped groove in the gelcoat. Vacuum up the dust and then wipe down the area to be repaired with an acetone-soaked rag. 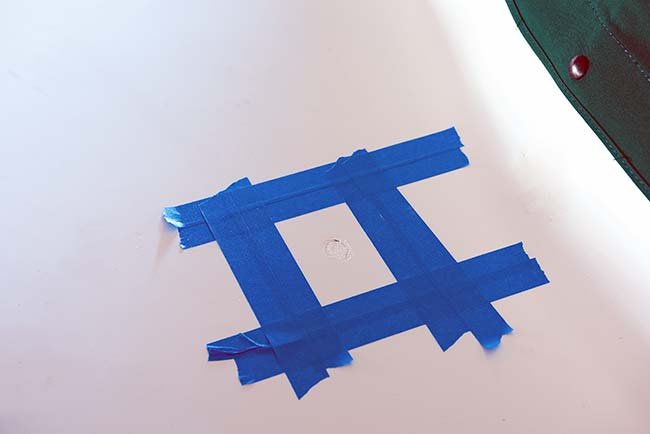 4. Mask off the repair, leaving about 2 inches all the way around. Use plenty of tape and a plastic sheet to protect the boat from damage and drips. 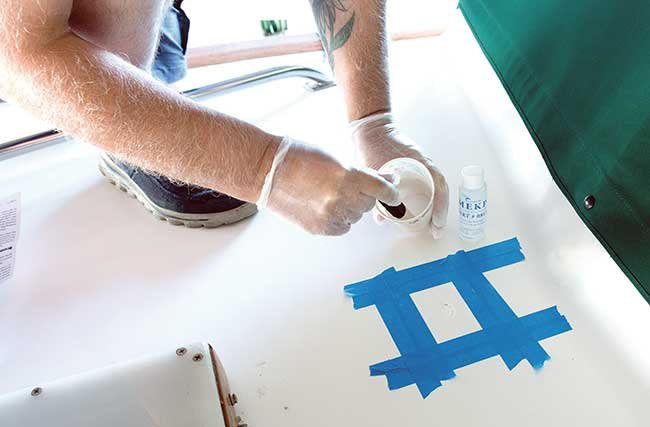 5. Mix the gelcoat thoroughly following the manufacturer's recommendations. Adding too much catalyst gives insufficient working time; too little, and the gelcoat won't properly cure. I'm using waxed gelcoat, which cures even when exposed to air. 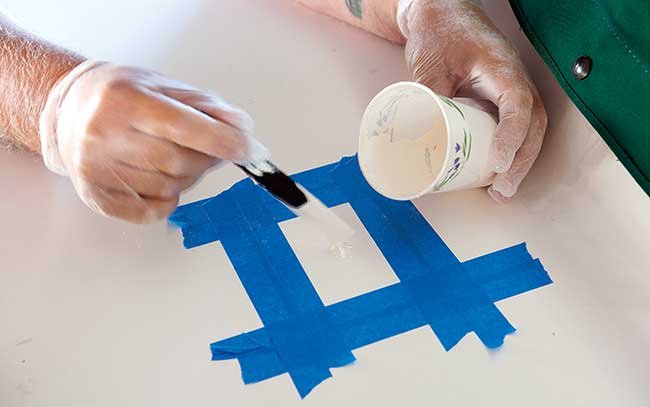 6. Use the mixing stick to run the gelcoat into the crack. Using a tapping motion ensures that there are no trapped air bubbles. Overfill the crack and leave it to cure overnight. 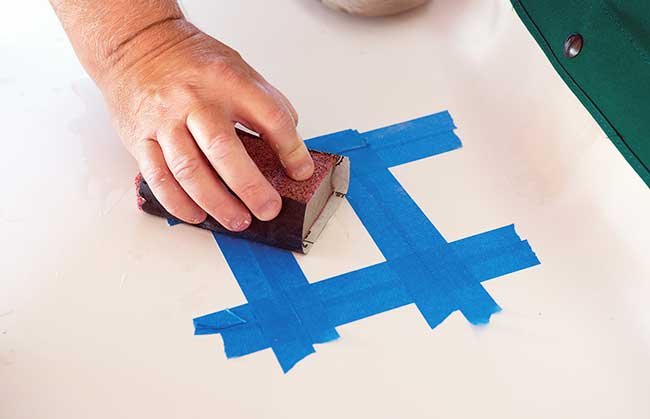 7. After the gelcoat cures (I gave it about eight hours), sand down the repair until it's flush with the surrounding surface. Start with 180-grit waterproof paper wrapped around a block until flat and smooth. Then switch to 240-grit before finishing off with 400-grit or finer, which removes any scratches. 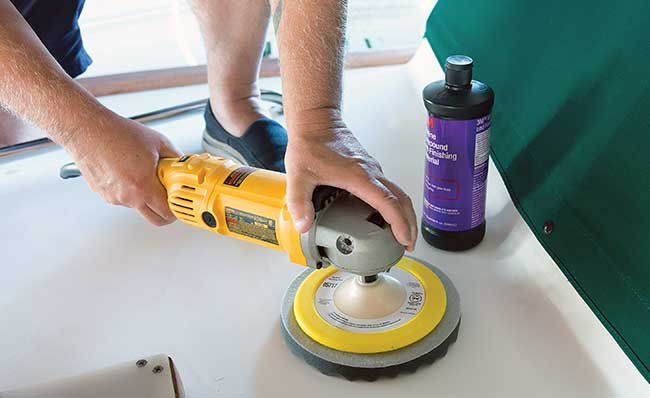 8. Remove the masking tape and plastic sheet, then finish off the repair with cutting compound followed by a layer of wax polish. You can hand-buff, but a slow-speed buffer leaves a better finish. 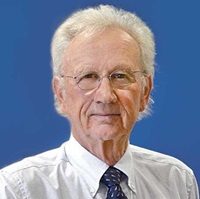 You may not know the name, but any DIYer worth his salt knows well his revolutionary creation that altered the way boats are built and repaired. Meade Gougeon, 78, died peacefully at home on August 27. Along with his brothers Jan and Joel, he founded Gougeon Brothers in 1969. Their employee-owned company became world-renowned for pioneering the use of epoxy for marine use.

The Gougeons were behind the formulation and manufacture of West System and PRO-SET epoxies that were like nothing that came before them. Unlike polyester and vinylester resins, then commonly used to bond fiberglass components, epoxies are versatile (bonding to fiberglass, plastic, metal, almost anything), impermeable to water, resistant to osmotic blistering, and much stiffer and stronger.

The advantages of epoxy resins were not lost on professional boatbuilders who were swift to embrace them. DIYers have also come to love the versatility offered by epoxy resins. Metering pumps that keep resin and hardener in the correct ratio, and a range of fillers and fairing compounds, have further extended epoxy applications. Most epoxy the company sells is for fiberglass repairs.

Initially the brothers obtained access to Dow Chemical's laboratories (through a relationship with Herbert Dow, an avid sailor) to develop an epoxy that could be used for coating and bonding. In 1971, Meade launched Adagio — the first large, all-epoxy bonded and sealed wooden boat built without the use of fasteners. The brothers built the 35-foot trimaran, designed by Meade and Jan, in just six months.

They set up their small shop in 1973 in Bay City, Michigan, an epicenter for iceboat racing. They used their groundbreaking bonding process to become the largest builder of iceboats in the United States, and Meade was a champion racer. A year later, they moved onto larger, more traditional boats.

In 1979, Meade wrote The Gougeon Brothers on Boat Construction. This iconic guide details composite construction techniques using epoxy and remains a favorite resource for professionals and DIYers alike. Epoxy boats built by the Gougeons include monohulls, multihulls, and even outrigger canoes, all aided by their tough epoxy construction. The brothers also moved their process beyond boatbuilding to airplanes and even spacecraft.


NASA's Wind Energy Project Office had Gougeon Brothers manufacture epoxy-laminated wood specimens for testing the strength of an epoxy bond between that and a threaded steel rod. The samples were so strong that they broke NASA's testing machine. GBI would go on to manufacture more than 4,000 wood/epoxy wind-turbine blades.

In 2015, Meade was inducted with his brother Jan, who died in 2012, into the National Sailing Hall of Fame. He is survived by his wife of 46 years, 10 children, and 14 grandchildren.

Cost:
About $25 for materials.

how to diy install and repair exterior