Is your old manual toilet driving you potty? An upgrade could be the answer to rid your boat of that smelly old monster. 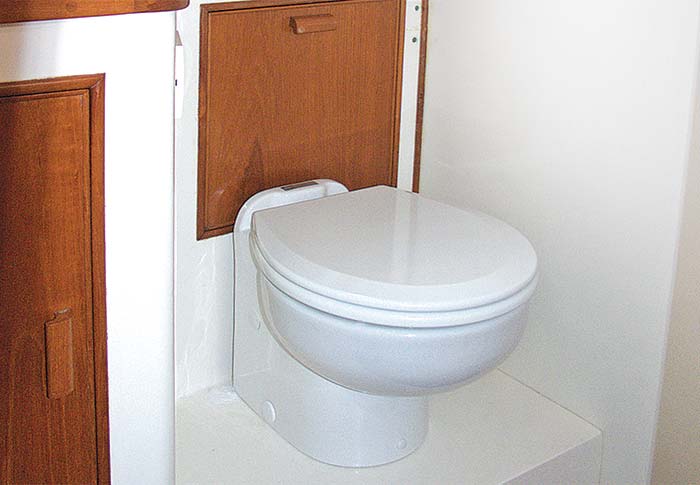 The new toilet is easy to operate and, unlike the original, has no ugly pipes on show. (The panel behind is lift-out.)

The Groco head on Seaglass was state-of-the-art when the boat was manufactured, but that was 25 years ago. The venerable Groco had started its life as a manual toilet, but at some point, a previous owner had upgraded it to electric operation. The head still worked, but there were a couple of things I didn't like about it. All the pipework, for example, was on display below the bowl, giving the installation a rather industrial look and making it hard to clean.

As part of a general refit of the boat, I wanted to install a toilet that was somewhat more streamlined and — more important — used freshwater for flushing. Boat toilets have a reputation for being smelly with a tendency to clog. There's a reason for this bad rap, but it's not all the toilet's fault. Correct use and maintenance are critical for the proper operation of any sea toilet. The plumbing hoses must be top quality, and, yes, nothing should be flushed down the toilet that hasn't been eaten first.

Nonetheless, the seawater used for the flush usually causes the sulfurous smell that's found in many heads and is often mistakenly attributed to waste in the tank and pipework. Seawater contains millions of tiny microorganisms, and as these die and decompose, they start to give off that rather evil smell that, sadly, is all too often considered an unavoidable part of life afloat.

Walking the aisles at the Miami International Boat Show a couple of years back, I spent some time looking at the offerings from various manufacturers. One caught my eye. Raritan is well known to many boat owners for its water heaters, but the company also manufactures a range of toilets. After some deliberation, I settled on the Elegance model, which can be flushed with seawater, freshwater, or a combination of the two. Other options include a straight or sloped back, high or low seat height, and a choice of white or bone color.

As the flushing on these toilets is controlled electrically, there are options here, too, from a simple push-to-flush switch to a programmable control. All these choices mean that there are few vessels on which these toilets couldn't be used. The macerator pump is built into the back of the toilet, concealed behind the china, and as if this were something from a science-fiction movie, it has what Raritan calls "Vortex Vac flush technology," which chops up waste and pushes it into the holding tank more effectively. Who knew sea toilets had become so sophisticated?

After some careful measurements — electric toilets usually take up more room than manual versions, and you want to make sure they'll fit — I chose the white low-seat model with freshwater flush and programmable control. The other thing that I hadn't considered, until my wife pointed it out to me, is that the toilet looks and works just like the one at home and doesn't require an engineering degree to flush. It's great for non-sailing guests, because you simply tell them where to press the button. The electronic control takes care of the rest, and gone forever are the instructions to "move the little lever to this position, give five strokes, close the lever, then pump 10 more times." Also, this model handily deals with the safety issue of preventing water from the toilet's plumbing from backing into the boat's potable-water supply. Different models handle this issue in different ways.

The installation took me three days in total, which included stripping out the old head and pipework, making good the fiberglass pedestal base on which the head sits, then installing the new toilet, plumbing, and electrical connections.

This is a fairly advanced DIY project, and you need to be confident in your skills. However, providing that you have a decent tool kit, patience, and a methodical approach, it's within the reach of a skilled amateur. Every boat is unique, of course, and circumstances differ, so although the final result may be similar, the method you need to follow may be slightly different from what you see here. Here's how I did it.

Degree of difficulty: Moderate to advanced

Time: Depends on the complexity of the installation. Mine took about 30 hours in total 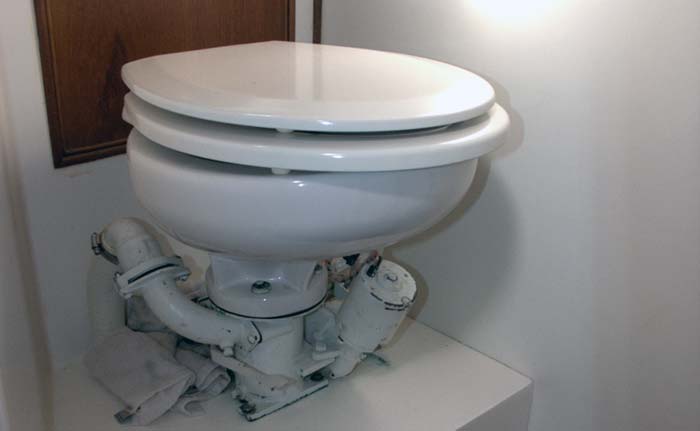 1. The old head worked, but it leaked, was noisy, and used seawater for flushing, and I disliked the exposed plumbing. It had to go. 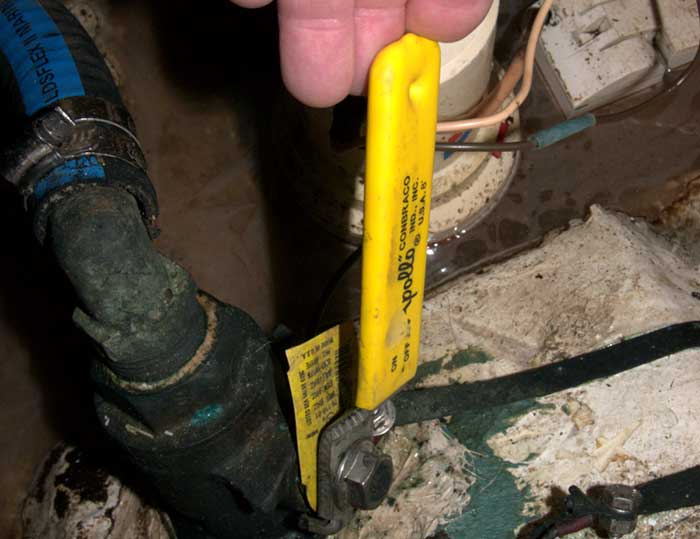 2. Step One was to turn off the power and close the seawater intake. As I was installing new plumbing and electrical wiring, I simply cut these out of the way. The raw-water intake pipe was cut off adjacent to the intake seacock, which was later repurposed for an anchor washdown. 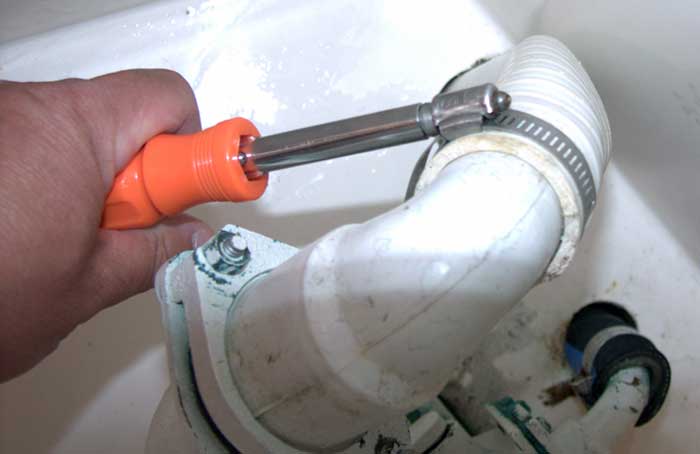 3. I disconnected the waste pipe from behind the bowl. Although this was being replaced, I didn't want to simply cut it, as I had no idea what might be lurking inside! With the bowl free of all connections, I unbolted it from the ­pedestal and took it ashore. 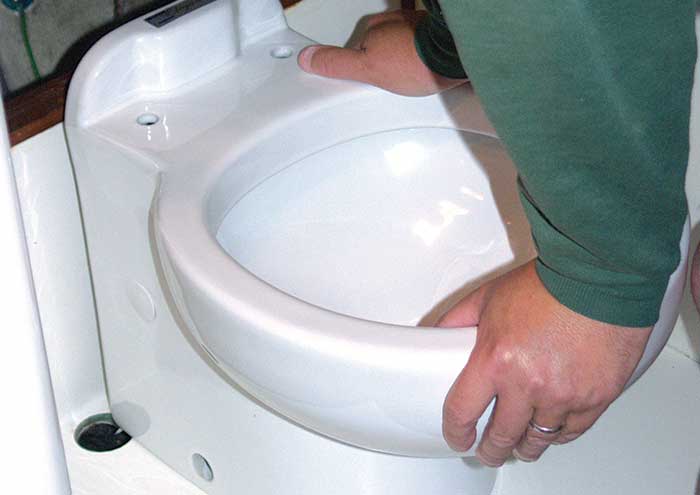 4. I now had a free space, and although the new head would be going into the same position as the old toilet, the holes through the fiberglass for the water intake and waste hoses were in the wrong place. They had to be filled and gelcoated, and this was done later. The new toilet was placed into position so I could check that the seat had proper clearance to open correctly. 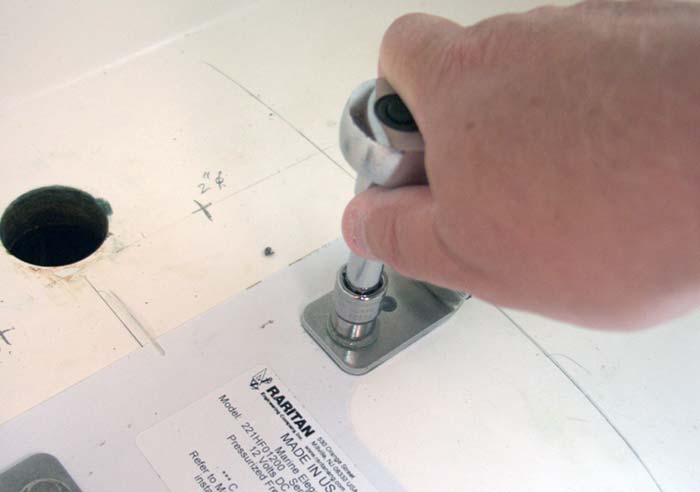 5. Once I was confident the toilet was in the right place, I made pencil marks around the perimeter and at the centerline of the bolt holes to correctly align the stainless-steel mounting bracket. After double-checking my measurements, I bolted the bracket in position in accordance with the instructions. The pencil lines previously drawn around the base and at the hole centerlines are needed for this step, as a setback measurement is required from these marks. 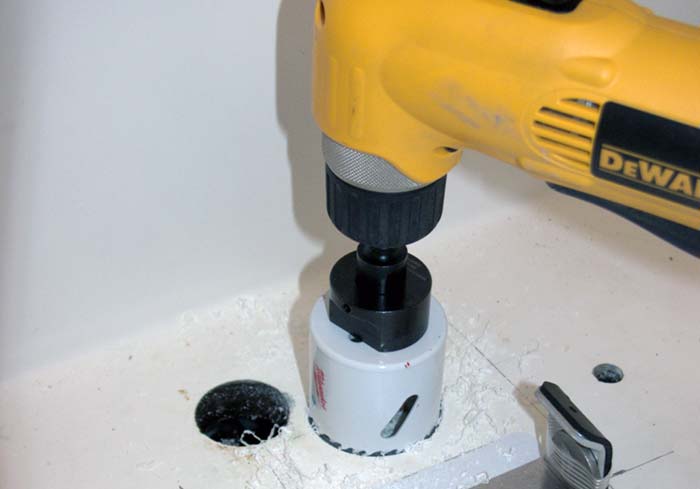 6. I had to drill extra holes for the water intake, waste, and electric wiring. Sizes are given in the instructions, and a sharp hole saw makes short work of this job. If the pedestal is close to the hull, be careful not to drill too far and go through the bottom of the boat! 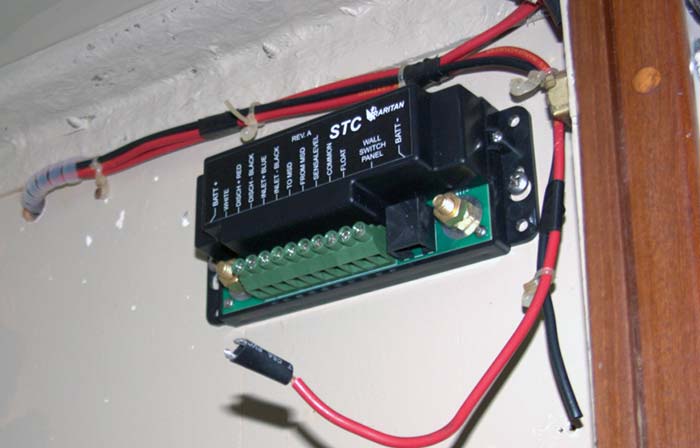 7. Connecting up the electric is straightforward, but you must follow the instructions with regard to wire sizing. I installed the electronic relay in the locker behind the head. This black box is wired according to how your particular toilet is configured. There are connections for a tank-level monitor and automatic start for a Lectrasan or other sanitation-treatment tank, if your vessel is so equipped. 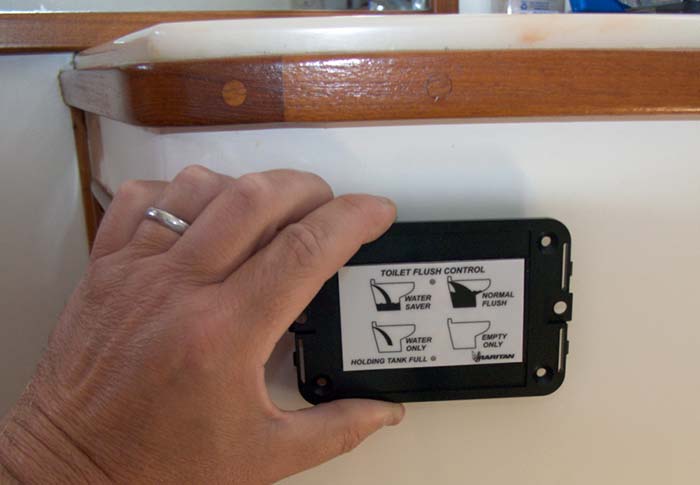 8. As I was installing the fancy programmable control, I chose a position on the side of the vanity. A 1.5-inch hole was needed for this, so I drilled a 1/16-inch pilot hole first to give the hole saw's guide drill something to follow. The vanity is very slippery, and drilling a pilot hole ensures that the large drill won't slip and mar the finish. I mounted the control using the supplied mounting screws, then ran the cat5 cable to the black box and plugged in. I was careful to ensure that all wiring connections were secure, using crimped connectors where appropriate and neatly clipping back cables to prevent them from sagging. 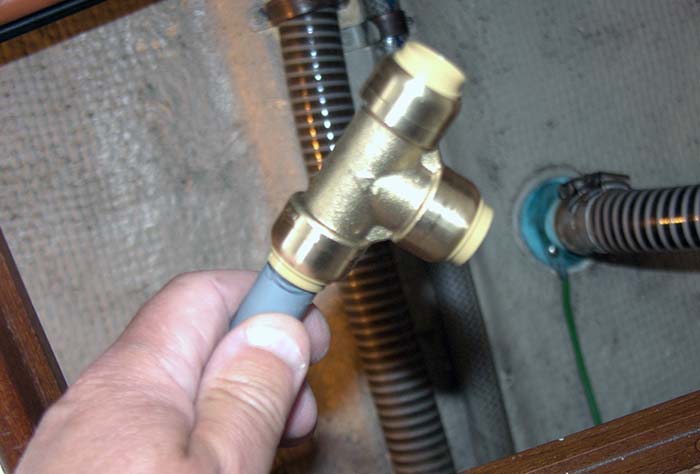 9. With the wiring complete, I turned my attention to the plumbing. As I was installing a freshwater flush, I had to T into the cold-water feed to the head's faucet. My boat is plumbed in PEX-style semi-rigid piping, so this was a fairly easy job. Had I been using a raw-water flush model, I would've simply replaced the hose that runs to the seacock. 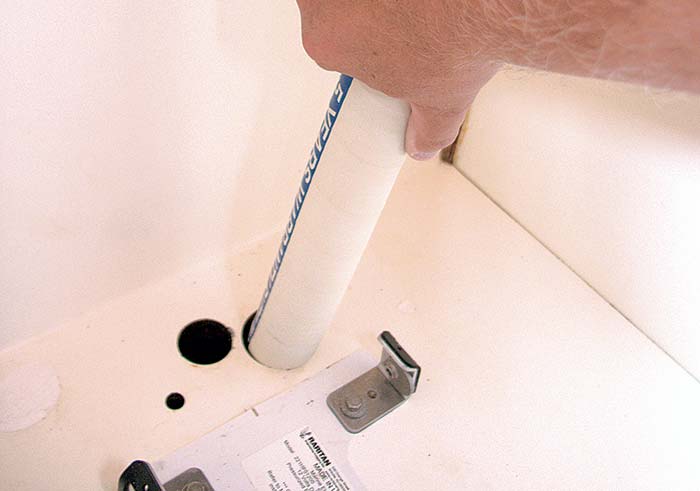 10. I had to wrestle the waste hose down through the pedestal and through a bulkhead into the engine bay before finally connecting it to the waste holding tank. A helper would definitely have made this job easier, but I finally prevailed. I used new sanitation hose from Raritan, which I ordered with the toilet. Don't be tempted to use flexible corrugated hose made for water tanks. It may be easier to run, but it will trap waste and smell. 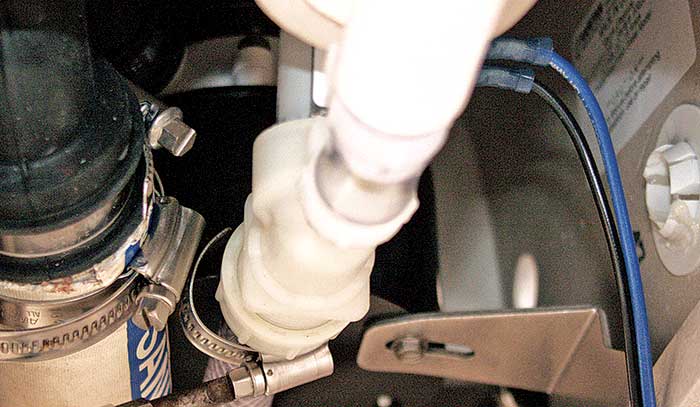 11. I connected the hoses to the back of the toilet using new hose clamps, then turned on the water and checked for leaks. You can just see the screwdriver tightening up the water-supply hose clamp. At this stage, the toilet bowl is also finally bolted to its bracket, but you need to be careful, as overtightening will crack the china. Now turn the power back on, and if all is well, the toilet should flush.

BoatUS Magazine thanks the folks at Raritan for their assistance, especially the late Dale Weatherstone.