How Likely Is Your Boat To Be Struck By Lightning

Spring and early summer are the most active times for thunder and lightning storms. Here's the good news and the bad. 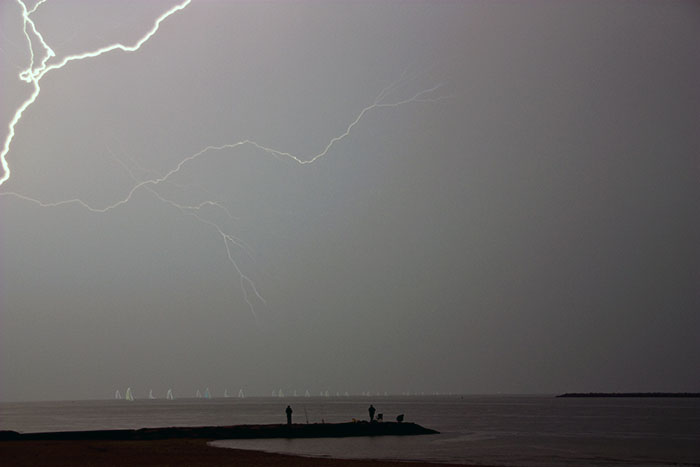 According to reports from our BoatUS Marine Insurance claim files, the odds of your boat being struck by lightning in any year are about one in 1,000. Some states, such as Idaho, have no lightning claims (no surprise). But for those of you with boats in Florida, nobody has to tell you that the odds there are greater. Much greater.

Thirty-three percent of all lightning claims are from the Sunshine State, and the strike rate there is 3.3 boats per 1,000. Not surprisingly, the majority of strikes are on sailboats (four per 1,000), but powerboats get struck also (five per 10,000). Trawlers have the highest rate for powerboats (two per 1,000), and lightning has struck houseboats, bass boats, and even PWCs. Lightning-strike repairs tend to be expensive and time-consuming, but there are things you can do to lessen the damage after a strike.

You Can Run, But You Can't Hide

Volumes have been written about methods to mitigate damage or even avert a lightning strike. Lightning, however, doesn't seem to read them. As an example, one boat, fitted with a popular "fuzzy" static dissipater at the top of the mast, was struck twice in one year. Ironically, the second time the bolt hit the dissipater, it happened even though the VHF antenna right next to it was higher. Lightning is unpredictable. While you can mitigate the damage from a lightning strike, there is nothing you can do to prevent one. So here we'll focus on what to do if your boat is hit.

The first thing you should do if your boat is struck is call your insurance company and get your boat short-hauled as quickly as possible for a quick hull assessment. The reason is that when lightning exits your boat, it can leave via a thru-hull fitting or even through the hull itself. Even if the force of the bolt doesn't blow out a thru-hull or cause hull damage, it may cause a gradual leak that could go unnoticed and sink your boat. As part of its "sue and labor" provision, BoatUS Marine Insurance will pay to have your boat short-hauled to check for damage. The short-haul is not subject to a deductible.

Damage Is Determined By How The Strike Exits

In a properly bonded system that follows American Boat & Yacht Council standards, the strike should follow a low-resistance path to a boat's keel or an installed grounding plate, though few boats are equipped this way from the factory. While no two lightning strikes are exactly alike, examining a typical claim can shed some light on the possible damages your boat might have if it's ever struck; some may not even have crossed your mind. Example: Priority, a 33-foot sailboat, was struck in North Carolina during a July thunderstorm. Sailboats are nearly always struck on the mast — and this one was no exception. A damaged or missing VHF antenna is typically the first sign that an unattended boat was struck. Sometimes bits of a melted antenna are found on the deck.

Disconnecting your VHF cable from your radio during lightning season may not help protect your equipment. Anything near the connector, including you, can get zapped during a strike.

It's no surprise that electrical devices are susceptible to strikes; NOAA estimates a strike contains around 30,000,000 volts, and a quick zap to a 12-volt device will certainly destroy it. But lightning is like horseshoes: "Close" counts. There can sometimes be collateral damage when a nearby boat gets hit, either the result of the lightning's powerful electromagnetic field or the current induced by the field running through the boat's shore-power cord. This can create strange problems; some electronics may work fine, others that are adjacent might not, and still others may only work partially. In some cases, compasses have been off by 100 degrees. 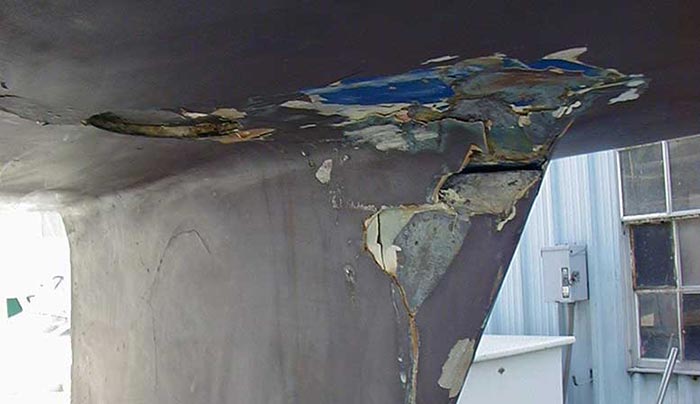 Lightning strikes can cause hull damage. If your boat has been struck, have it hauled to inspect for damage. (Photo: BoatUS Marine Insurance)

In one instance, the owner of a 28-foot sailboat noticed an amber LED on his battery charger that he'd never seen lit before, and his depth sounder had quit working. He couldn't figure out what had happened until his neighbor told him his boat had been struck. On another boat moored next to a struck boat, the compass readings were 50 degrees off and slowly returned to normal after a few weeks. But a direct hit usually causes more obvious and substantial damage.

When a boat gets struck, lightning is trying to find its way to ground, typically the water around and under the boat. When a sailboat like Priority gets struck, one of the paths the lightning takes is down the mast; typically, anything that happens to be close by on the way down can be destroyed: wind instruments, TV antennas, radar, lights, and so on.

Fortunately, aluminum is a very good conductor and allows the strike free passage. However, wood and carbon-fiber masts can get damaged because neither one is a good conductor. Thankfully, damage to the rigging is rare. Though mast-mounted components are the most likely to be destroyed, anything on the boat that is electronic can be damaged. As a general rule, if the equipment works OK after the boat was struck, it probably wasn't damaged; it's unusual for electronics to fail months later.

Often the first sign owners have that their boat was struck is that some of the boat's electronics don't work. Look for fuse failures, and if you have more than a couple of blown fuses, look to lightning as a possible cause. Powerboats are typically struck on the VHF antenna or bimini top, and though electronics are often destroyed, passengers are fortunately rarely injured. Sometimes, however, the engine electrical system is damaged. This underscores the need for nonelectronic signaling devices, such as flares, in case your boat is struck at sea and is taking on water or, worse, if someone is injured.

Lightning Can Be Brutal To Fiberglass

In the case of Priority, the lightning traveled down the mast in addition to the VHF coaxial cable. The cable had been disconnected and was resting against the hull inside the boat. When the strike exited the cable, it had no easy way to get to the water. After traveling a quarter of a mile through air, lightning has no trouble going through a fiberglass hull, and this is exactly what it did, blowing a 3-inch hole on the way. Fortunately, the hole was above the waterline, and the boat was saved from sinking.

Powerboats are also susceptible to hull damage and are less likely to have been fitted with a lightning-protection system. Fortunately, the strike usually exits the boat through the props and rudders, and aside from damage to the bottom paint, the running gear is not often damaged (although electronic engine controls sometimes are). Need another good reason to replace a leaking fuel tank? A 25-foot fishing boat with a small amount of fuel in the bilge exploded at the dock when it was struck, sending the contents of the boat's cockpit nearly 100 feet away. Rarely, the claims files show that lightning enters a boat's electrical system and creates enough havoc to start a fire.

Strike By Type Of Boat

One component that is often destroyed is a ground fault circuit interrupter (GFCI). This can easily be overlooked after a strike. Though it may still power appliances, the protection circuit is often nonfunctional. A GFCI can be easily checked by pushing the test button on the cover. Other small items to check are handheld radios and GPS, bilge pumps, inverters, lights, and fans. It should be noted that lightning is fickle and boat damage varies enormously; one owner saw his boat struck on the mast and yet none of the electronics were damaged. The only evidence the surveyor could find of the strike was a blackened area on the masthead.