Knowing where the dangers are and how to check for leaking AC electricity in the water could be a lifesaver. Spring is the time to do it, before you put boats and people in the water. 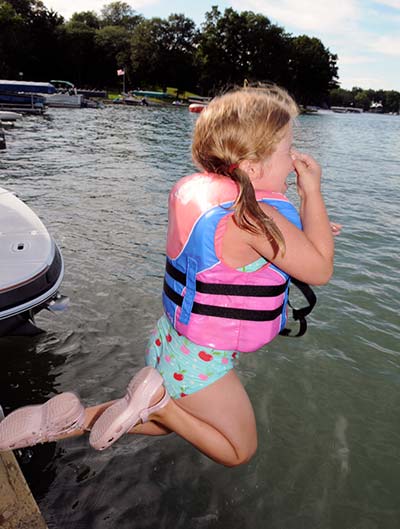 Sadly, each year there are numerous accidents in the waters around boats and docks where AC electrical power is in use. Last year, at least six deaths and 15 near misses (where the potential victim escaped death) have been identified.

Electric-shock drowning (ESD) occurs when an AC electrical current flowing in the water passes through the body of an individual immersed in the water. This current causes muscular paralysis, impairing one's ability to swim or stay afloat, leading to drowning.

ESD is far more likely to occur in freshwater than saltwater. In freshwater, the body is a better conductor of electricity than the water itself (the opposite is true in saltwater). Be aware that many bodies of water can become brackish or fresh even though they were previously saltwater, depending on such factors as tides, wind, and rainfall.

The causes of electrical currents leaking into the water vary but are often the result of faulty wiring and equipment on boats or docks. These faults are sometimes created unknowingly when a boat owner attempts to repair or upgrade a vessel's electrical systems. There are differences between household wiring and boat wiring, and if you're not 100-percent certain of what you're doing with shore-power repairs, hire a professional.

The most important message is this: Never swim near any dock or boat where AC power is in use. To reduce risk to an acceptable level, individuals (and pets) should never enter the water within 150 feet of any electrical equipment or wiring. This pretty much eliminates swimming in a marina, especially off a boat; most marinas prohibit it anyway.

In 2011, the National Electric Code introduced new requirements for ground-fault protection in shore-power applications in marinas and boatyards. The latest version for 2017 expands the area for such protection to docks at private residences. The new requirements are not retroactive, but owners and operators would be wise to upgrade their facilities to improve safety around their docks. Upgrading can be as simple as installing a ground fault circuit interrupter (GFCI) at the dock pedestal. This device will trip if dangerous current escapes the dock. The new requirements also include warning signage on all docks (including residential ones) using electricity.

The American Boat & Yacht Council also added a requirement for whole-boat ground-fault protection to its standards several years ago, and an equipment leakage current interrupter (ELCI) is now installed on new boats. Owners with older boats should consider upgrading their shore-power systems. The upgrade equipment is normally installed in the boat at the power panel and can take as little as two hours for a pro to install.

While not foolproof, you can test if dangerous electrical currents are in the water around your boat. You'll need an AC clamp-type meter with a minimum resolution of 100 milliamps. With the boat connected to shore power, clamp the cord with the AC clamp meter. Because the meter is reading the difference between the current running to the boat and what's returning in an AC circuit, the reading should be zero. Anything above that is the amount of current not returning and most likely flowing into the water around the boat. More than 100 milliamps of current in freshwater and 500 milliamps in saltwater is dangerous and should be investigated immediately. But this test is valid only if everything in the boat using AC is turned off.

What You Can Do

David Rifkin of Quality Marine Services in Jacksonville, Florida, is a SAMS surveyor. He's an ABYC-certified Corrosion Control Specialist and Marine Electrician. In addition he's an ABYC instructor in Marine Corrosion and Electrical Certification. David is an expert on electric shock drowning (ESD).