Lures From The Fish's Point Of View

What color of lure is the best in any given fishing situation? Here's advice from the pros. 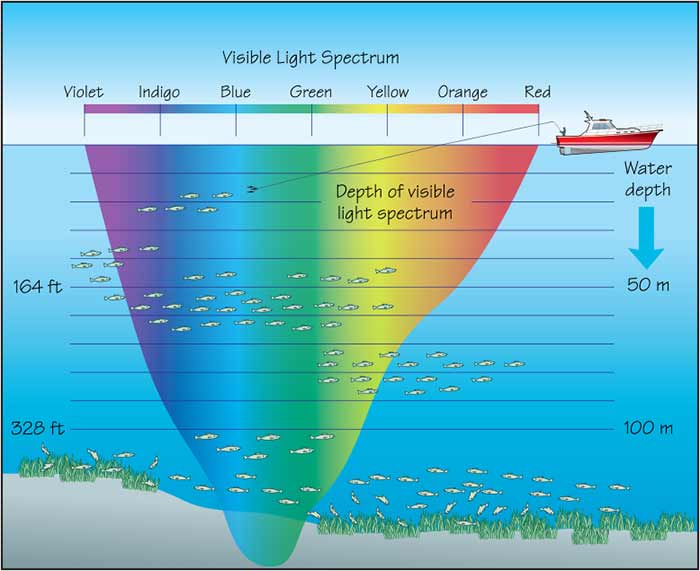 As you move deeper (or farther away) through the water, long-wavelength "hot" colors like red and orange fade away the quickest. Short-wavelength colors that are "cooler," like blue, remain visible the longest. Different colors that are close to each other in the light spectrum won't necessarily trigger different responses if the lure is fished at a depth or distance that causes the colors to fade. If yellow is ineffective in a specific depth and situation, for example, red and orange are also likely to be ineffective, as they'll have a similar appearance to the fish. As you experiment, try changing to a vastly different color, like blue or purple. (Illustration: ©2016 Mirto Art Studio)

Sometimes white lures work the best. Other times green is the ticket to success. And the very next day in the very same place, red might be the top pick. But which color works best is not random — however it might seem sometimes. How will you know which color to reach for the next time you head out for a day of fishing? We'll get into the key environmental factors you need to take into consideration in a moment. But first, let's try to see the world through the fish's eyes.

There's been plenty of research showing that, yes, fish do see things more or less the same as we do. Naturally, different species have different capabilities, but fish and humans all share lens-covered retinas, rod cells (better in low light), and cone cells (better in bright light). Many species of fish go one better, with special cone cells that can detect ultraviolet light. Our human eyes don't have this ability. Score one for the fish! 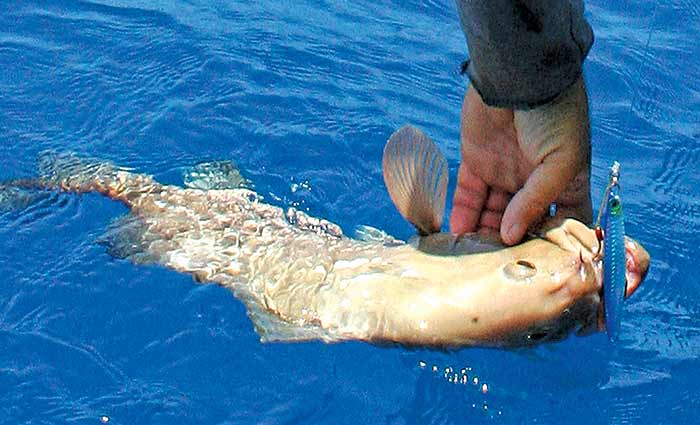 The general rule of thumb: Start out by matching lure color to water color.

What really makes their view different is the fact that they're always peering through the water, and light acts differently in water than it does in air. It gets scattered, bent, absorbed, converted into heat, and it even gets stolen away by pesky little organisms using it for photosynthesis. As a result, most of the color spectrum disappears within the first 30 or so feet of water. Some long-wavelength colors ("hot" ones, like red and orange) disappear in as little as 10 feet. A few short-wavelength colors ("cool" ones, like blue and green) can still be seen as far as several hundred feet down. Why use qualifiers like "as little as" and "as far as"? Because the exact depth at which these colors fade away changes, depending on water clarity and the nature of suspended solids in the water.

The brightness level of available light at any given time also has a huge effect on what the fish is (or is not) seeing, and thus, on color choice. If you've ever noticed that a color can be effective at daybreak or sunset but goes untouched midday, then you may have surmised that the fish's color preference can change with light levels. In fact, something as minor as cloud cover moving in can trigger a dramatic shift. But this doesn't have much to do with a fish's preferences. It's more a matter of physics. 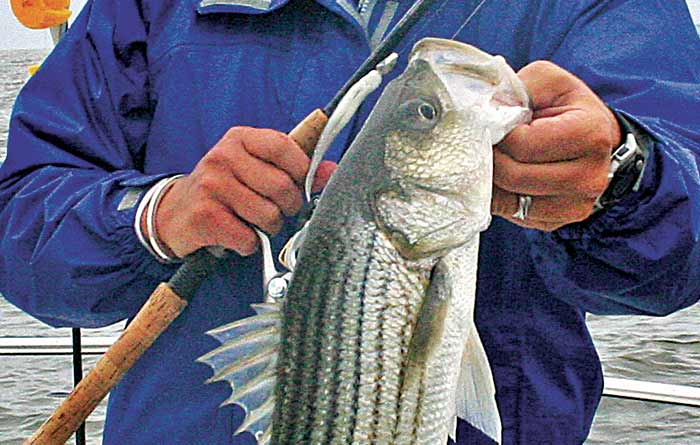 In low light, dusky colors like this pearl gray may not seem too appealing to human eyes, but they give the fish a highly-visible profile.

In bright light conditions, shiny colors that reflect sunlight can be seen from far away. This is when you reach for your silver or gold spoons and lures with metallic finishes. In low light, on the other hand, bright and reflective colors merely reflect the dullness of their surroundings and aren't as likely to draw strikes. Though it may seem counterintuitive, this is the time to reach for more passive or dark colors, like dull gray or plain white. Rather than attempting to reflect the available light, they get their attractiveness by creating a silhouette that's easy for the fish to spot. 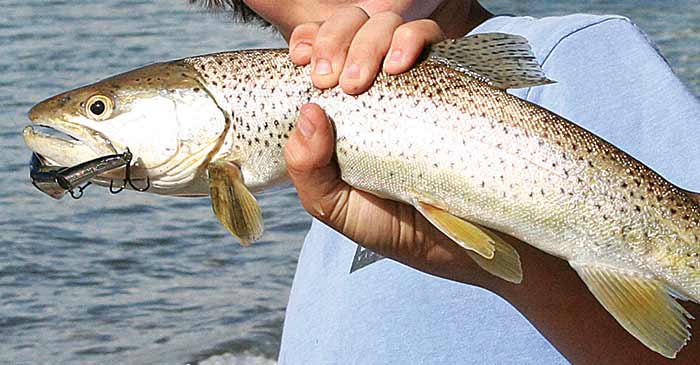 Wait a sec. Remember those special ultraviolet-sensitive cells we mentioned earlier, that some fish have in their eyes? UV light becomes dominant in low-light conditions, when the sun is up but it's not at all bright due to cloud cover or fog. This is where fluorescent colors come into play. UV light "activates" fluorescents, and even though we may not be able to see much of a difference, the fish can. That often makes fluorescents a prime choice on gray days. There's one glaring exception, because fluorescent colors aren't exactly natural-looking. That means their highly visible nature can also make them look a bit unusual in their surroundings, and if a predator species is focused and actively feeding on a specific prey species, it may not be the least bit tempted by a fluorescent lure that appears out of place or unusual. 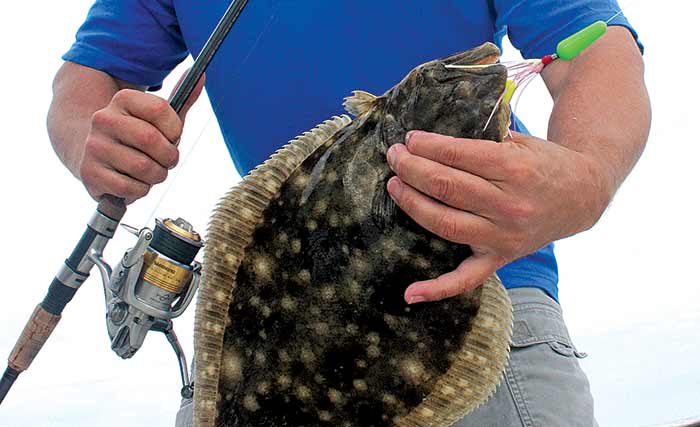 Contrast is extremely important, but you have to remember that the contrasts you see on the surface aren't necessarily those the fish will see down deep.

Another light-level factor to take into account is the depth of your quarry. Many species will move shallower in low-light conditions, and you need to remember that because this broadens the spectrum of visible colors, it also broadens the spectrum of your choices. When they're feeding up along the shoreline in a mere 2 or 3 feet of water at dawn, most predator species will be able to see those red bars or orange fins on your lure. As the sun grows high in the sky and those very same fish transition to deeper waters, different colors and patterns are likely to become more effective.

When all is said and done, you can boil down these environmental factors and conditions into one general rule of thumb: Start a fishing trip by looking at the water with your naked eye, and match your lure color to what you see. If the water is bright and mirrorlike, metallic silver is a good bet. If you're in tannic-stained waters, root beer is a reasonable starting point. If you're in green water, chartreuse is the color to begin with. And if you see blue water, blues are often going to be the winner.

No, this isn't a "hard" rule. It's merely a starting point, a place for you to begin your daily color experimentation, which more or less conforms to the different factors coming into play. It's your slightly informed best guess as you try to see the world through a fish's eyes.

Speckled sea trout love bubble gum-pink lures.
Pink may not always be the best choice for this or other species. But experience proves that speckled trout seem unable to resist attacking pink lures far more often than science would seem to indicate.

If you live on the East Coast, you've heard the old saying, "If it ain't chartreuse, it ain't no use."
Often — who knows why — chartreuse is the hot color of the day in many different conditions and types of water. 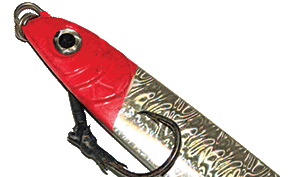 The red/white color combination is a classic.
But it may have more to do with contrast than color. A lure with good contrast is more likely to stand out against any one background. Lures with contrast are also more in tune with nature. There's some amount of contrast on virtually every prey species, often between the head, body, and tail.

If you look at a brown crayfish or a green-blue crab swimming along on the surface, it'll look just as different down where the fish are as your brown or green lures do. The lesson is classic, folks: Match the hatch!

Lure depth and color loss are important considerations when trying to choose lures with contrast. Matching a red or orange jig-head with a gray tail may be a bad move when fishing in deep water; the jig-head's color will fade to gray or black (the deeper it gets, the darker it appears) at depth.

Match color brightness to light level to increase its visibility, with the exception of fluorescent colors, which often work better on dull, gray days.

Don't undersell black in extremely low-light conditions. While it has little appeal to the human eye, it creates an excellent silhouette and is very visible at night or in highly turbid waters.

Spanish mackerel often prefer gold spoons to other lures, regardless of conditions. Sometimes this holds true even when they're clearly chasing silver-colored baitfish — despite the fact that this goes against the usual "rules" associated with color choice.