By most accounts, the acclaimed and charismatic writer lived life — and sailed — impetuously and on the edge. 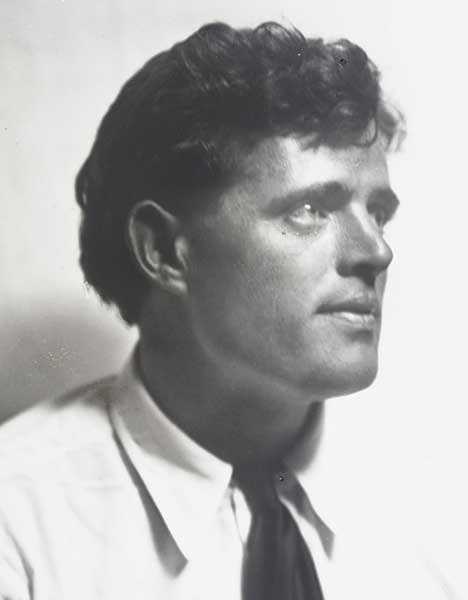 In the early 1900s, Jack London read a book that altered his life: Joshua Slocum's recently published Sailing Alone Around the World, in which the seasoned sea captain made voyaging in a 37-foot boat seem simple and minimally risky. London was inspired: He decided to set out on an equivalent adventure.

At the time, he'd attained considerable popularity and some acclaim as a writer: In only six years, he'd published 16 books. Two of these — The Call of the Wild (1903) and The Sea-Wolf (1904) — sealed his reputation. He was in high demand as a lecturer, and he commanded top prices writing for the nation's magazines. He planned to write while he sailed.

London began by building his dream boat, one he deemed perfect for his planned voyage: Snark, a 55-foot cutter-rigged ketch of his own design. He entrusted his wife's 60-year-old uncle, Roscoe Eames, a former ferryboat captain, with many of the design details and construction supervision. London wanted his boat to be built of the finest materials.

London could have — and probably should have — purchased one of the many boats for sale in his area near San Francisco, California; had he done so, he would have saved a small fortune. He originally planned to spend $7,000 building Snark; the expense eventually totaled $30,000 (in today's U.S. dollars, more than $750,000) — which placed him on the edge of bankruptcy. But sailors follow dreams, and London wanted a boat to suit his purposes. He called the ketch rig "a compromise between a yawl and the schooner." He had never, he confessed, even seen a ketch. Apparently, he relied instead upon his reading to design a boat he hoped would balance well in the storms he expected to encounter.

From the beginning, Snark was plagued with problems. Three months after construction began in January 1906, San Francisco was nearly leveled by an earthquake. As a result, the price of materials skyrocketed, as did the wages of skilled workmen, who were much in demand. Construction materials shipped to San Francisco encountered delays. Inferior materials were substituted for the premium materials London had specified and paid for. Compounding the problem was Eames' ineffectual management of the project. Fed up with the delays and disasters, London finally decided to set out with many of the boat's systems still unfinished; he planned to complete construction at his first port of call.

On April 23, 1907, Snark set sail from San Francisco bound for Hawaii, the first stop on an intended seven-year voyage around the world. Accompanying the 31-year-old London were his wife Charmian; Eames, who would serve as hired captain; and three young men who would serve as crew. 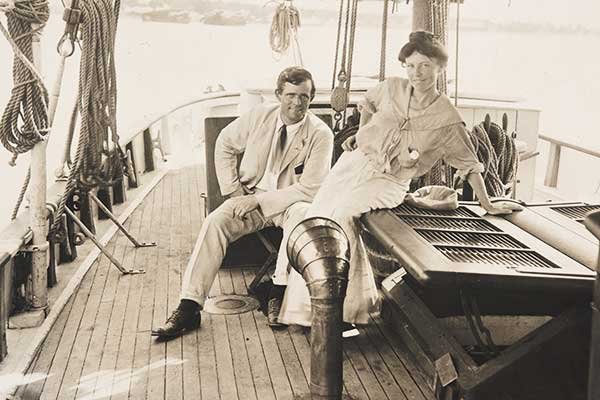 Jack London with wife Charmian. The two set out on a 2,000-mile journey from San Francisco to Hawaii in April 1907.

Of the six people aboard Snark, only London himself had ever sailed out of sight of land. At age 17, he'd shipped aboard the sealing schooner Sophia Sutherland as an able-bodied seaman on an eight-month voyage, so he knew full well the potential dangers of the sea and storms, and his account of surviving a typhoon at sea during that voyage had launched his writing career. Unfortunately, that knowledge didn't extend to his captain and crew. Although Eames had served as a ferry captain, he'd never sailed out of San Francisco Bay; the others had never sailed on a small boat. No one aboard Snark knew how to navigate — no small matter when the first landfall was more than 2,000 miles away, across open sea.

All aboard were infected by the dream of their planned adventure, first to the romantic South Pacific, then on to Asia and Europe. London's personal magnetism and self-confidence allowed him easily to inspire others to follow the siren song of the sea, but no one aboard Snark had any real appreciation of the challenges that lay ahead.

When they set sail for Hawaii, without a working engine and under an overcast sky, London and his crew set a dead-reckoning course of south-southwest for what crew member Martin Johnson later described as "27 days [that] were the most wild and chaotic that human beings ever experienced." Immediately, London's dream faced its first test: The boat he'd proudly proclaimed to be the best small boat ever built began taking on water. Johnson noted in his diary: "The sides leaked, the bottom leaked; we were flooded. Even the self-bailing cockpit quickly filled with water that could find no outlet. Our gasolene (sic), stored in [leak-proof] tanks and sealed behind an air-tight bulkhead, began to filter out, so that we hardly dared to strike a match." By May 2, 10 days after setting sail, matters had not improved. Johnson mournfully recorded, "Will we ever reach Honolulu alive?"

To make matters worse, four days after setting sail, Snark encountered its first storm, and no matter which combination of sail they tried, they could not get the boat to heave-to. London downplayed the seriousness of this deficiency in his book about the voyage, The Cruise of the Snark, but the failure was potentially catastrophic. Why couldn't Snark heave-to? A likely reason was London's unfamiliarity with the ketch rig and storm sailing tactics; "sailing master" Eames was also unfamiliar with balancing a ketch rig. (Later, after London replaced Eames with James Warren, a more experienced captain, Snark's log records several instances of successful heaving-to "under staysail and mizzen.") 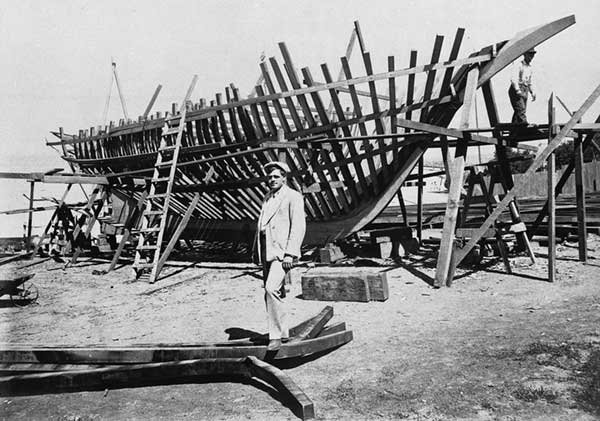 London insisted on having his boat built on his own designs, which nearly bankrupted him before the journey started.

Snark's many troubles up to that point can be attributed to poor planning, shoddy materials, and inexperience, but the fact that Snark set out on a roughly 2,000-mile voyage without a competent navigator defies comprehension. While the boat was under construction, Eames was supposedly learning navigation. Unfortunately, he subscribed to a crackpot theory espoused by a man named Cyrus R. Teed, leader of a religious cult that believed the Earth was a concave sphere in which the sun was at the center of an 8,000-mile-diameter globe. Teed believed the stars and planets were not celestial bodies but "little focal points of energy, discs of mercury in the Earth, between the metallic shells; they are concave to the center." Later, London joked about Eames' allegiance to Teed's theories in his book, writing that "Roscoe will journey around the world on the inside, while I shall journey around on the outside" — but Eames' faith in Teed's cosmogony made it hard for London to have confidence in his captain's navigational skill. Before long, London became dissatisfied with Eames' discharge of duties overall. In a letter to Eames' wife, London called him an "incompetent, a shirk, a whiner, a demoralizer of crew, and no more a seaman than I am an Egyptian dancing-girl." As a result, on May 5, London fired his captain (though Eames still took part in the daily operation of the boat). London now began to study navigation in earnest. 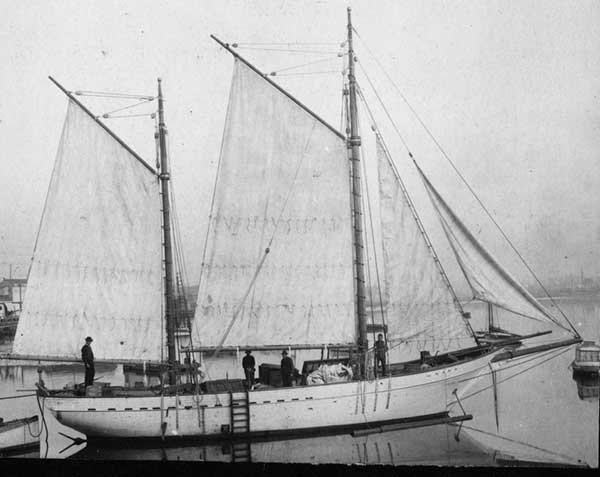 In his book, London downplays the difficulty of learning celestial navigation while underway as "child's play" in which "any young fellow with ordinary gray matter, ordinary education, and with the slightest trace of the student-mind, can get the books, and charts, and instruments and teach himself navigation." He devoted two chapters to illustrating his feat, yet he was uncharacteristically modest. Celestial navigation, while relatively simple in theory, is quite complex in its calculations, and a simple calculation error can put a boat miles off course.

So how did these amateur navigators fare? For the first six days of the voyage, the sky was overcast, so no sights were possible — they were navigating by dead reckoning and covered about 440 nautical miles. On April 29, Eames took his first sight. For the next 11 days they had clear weather, and Eames continued his observations, with London teaching himself navigation and, according to Johnson's diary, assisting by May 1. When Eames proudly displayed their course on the chart on May 6, Johnson commented, "[Eames] has just hung the map with our course, and it's the most zigzagged route I ever saw. Yesterday we actually went out of our way fourteen miles." By May 12, both London and Johnson were growing more confident in their navigation, though Johnson wryly observed, "We found that we were able to produce a wildly different set of figures. ... I well remember the day that my figures showed we were in the Atlantic instead of the Pacific. As I think back, I wonder more and more that we got anywhere. But luck was with us."

On May 17, the weary crew of Snark finally sighted Mount Haleakala, the highest point on Maui, some 120 miles distant. The sighting came at a good time. Said Johnson, "Previous to our discovery, we had been in low spirits, for ... out of three observations, none agreed, and all varied about 60 miles. We suspected our chronometer had gone wrong; and we feared that we might flounder around for weeks and never find the islands. Jack had given orders to be saving on food and water, and to wash in salt water, but he countermanded that order now."

On May 20, they safely arrived at Oahu, Hawaii, surprising the press and others following the voyage who'd presumed them lost at sea. The intrepid adventurers had accomplished their goal and achieved what many had predicted was impossible: They'd set out in an unfinished, badly leaking boat, survived crippling seasickness and broken equipment, and weathered storms in a boat in which they couldn't figure out how to heave-to. Most significantly, they taught themselves celestial navigation underway and, against all odds, found a relatively small speck in the vastness of the Pacific Ocean.

Top destinations, domestic and abroad, for a 2023 fishing vacation you'll never forget — including fun spots for the nonanglers in your group.

A weekend boater gets hung out to dry when she joins the enthusiastic fray of Radio Control Sailboat Racing.

Sailing By Women, For Women

The 2023 Sailing Convention for Women draws female sailors from different generations and backgrounds to share their knowledge, skills, and camaraderie.

Keith Newlin sails his Cape Dory 28 out of Wilmington, North Carolina. When he's not sailing, he's a professor of American Literature at the University of North Carolina at Wilmington.