Once a fish is solidly hooked, chances are you'll get it up to the boat. But getting it over the gunwales is another matter. 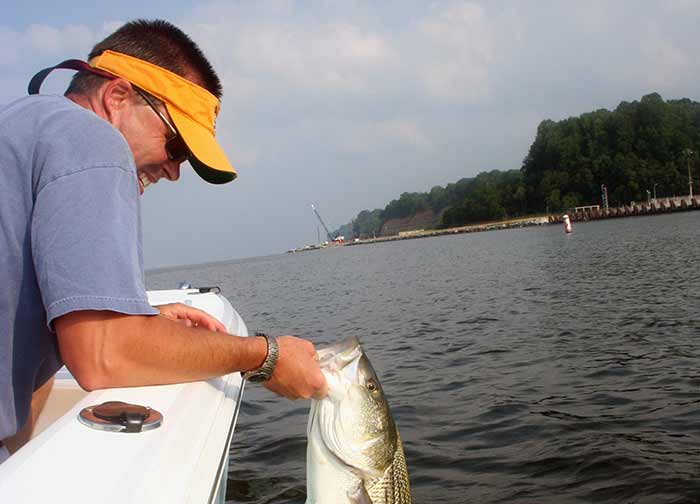 Lipping is a quick, if somewhat risky, way to land fish that don't have sharp teeth.

More fish are lost during the lipping, swinging, gaffing, or netting than at any other point during the fight. And if you can't get that fish out of the water and into your fishbox, the rest of the story is academic. Ever heard a tale about the big one that got away? Yeah, we thought so. Unless you want to be the one telling that story, now's the time to listen up. Let's take a look at each of these four methods to bring a fish on board and the best way to apply them.

Inserting your thumb or finger into a struggling fish's mouth and gripping its jaw is certainly not the most effective way to get it in the boat. Nor is it the most physically comfortable, because on most boats, it means kneeling or bending down to get as close to the water as possible. But it does have several very important advantages. First and most important, it's one of the least-harmful ways of catching and releasing a fish. More on that later. Another advantage is the fact that you don't need any extra equipment to do it.

However, you should expect to lose quite a few of the fish you attempt to land by lipping; often the fish will make a last-ditch effort to get away as you reach down, and quite often, it'll be successful. So reserve lipping for the fish you aren't terribly concerned about landing. There is, of course, one other overriding factor to consider: Don't lip a fish unless you're 1,000 percent sure it doesn't have sharp teeth. More than one newbie has grown accustomed to lipping one bass after another, then made the mistake of lipping a toothy pickerel. Ouch.

If you're catch-and-release fishing, don't worry as much about losing the fish while landing it; your main concern should really be to make sure that the fish gets released unharmed. Whenever possible, take the hook out while the fish is still in or partially in the water. Lipping is a particularly good method to use, when possible. Avoid grabbing and squeezing the fish, which can harm its internal organs. And never hold it with a dry towel, which will remove its protective coating of slime. Also avoid using nets, which tend to rough up the fish, unless the net is specifically made for catch-and-release fishing; such nets usually have a rubbery coating over the mesh. Visit fishsmart.org for a more comprehensive look at how to release fish unharmed. 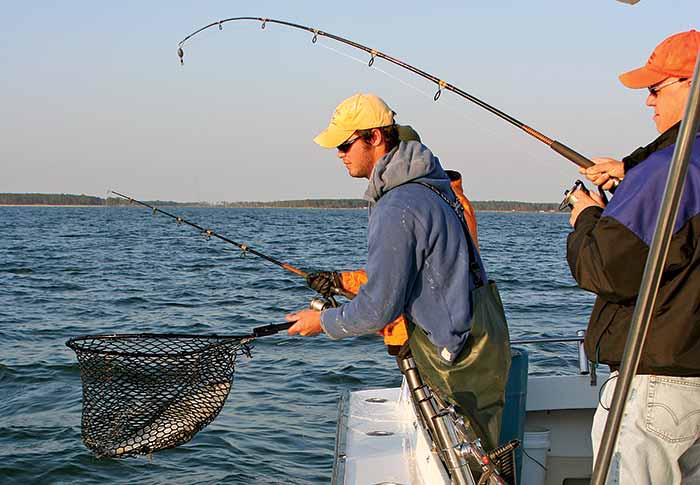 The stiff knotting in regular nylon net mesh abrades the fish and removes its protective slime, so mesh with a rubberized coating is the best choice if you plan to net fish that will be released.

Swinging fish over the gunwales is another risky way to land a fish. The procedure is simple: When you've reeled the fish close to the boat, lean down and grab the fishing line, then quickly yank your catch out of the water and swing it into the boat. This is risky because, as you might surmise, the fish sometimes flies right off the hook in the middle of the swing. Other times, the sudden stress breaks your line. Again, however, this method is advantageous because it's fast, simple, and requires no extra gear. Making your fish fly can also be also quite entertaining, particularly on crowded boats. 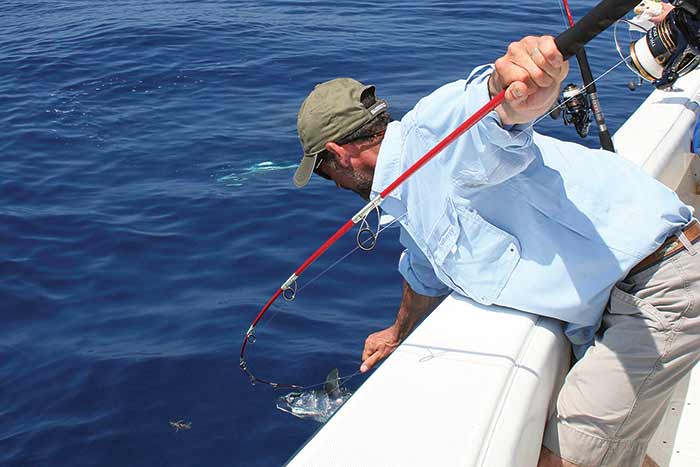 When swinging a fish aboard, try to grab the leader two to three feet above the fish.

A note of caution: Swinging fish aboard should only be attempted with relatively small fish that are nowhere near the maximum breaking strength of your fishing line. Remember, during the fight the fish's body is supported by the water. The moment you lift it out of the water, the amount of weight it puts on your fishing line increases dramatically.

Gaffs are usually reserved for the largest, toughest-to-land fish, like tunas, shark, and swordfish. In fact, short of carrying over-the-top gear like harpoons and firearms, there aren't any other options when it comes to landing those powerful pelagics. Fixed gaffs — poles with a big hook on the end — are used for fish weighing as much as a couple of hundred pounds, and true monsters are tackled with flying gaffs, which have a detachable hook that's tied to heavy rope and secured to a boat cleat. 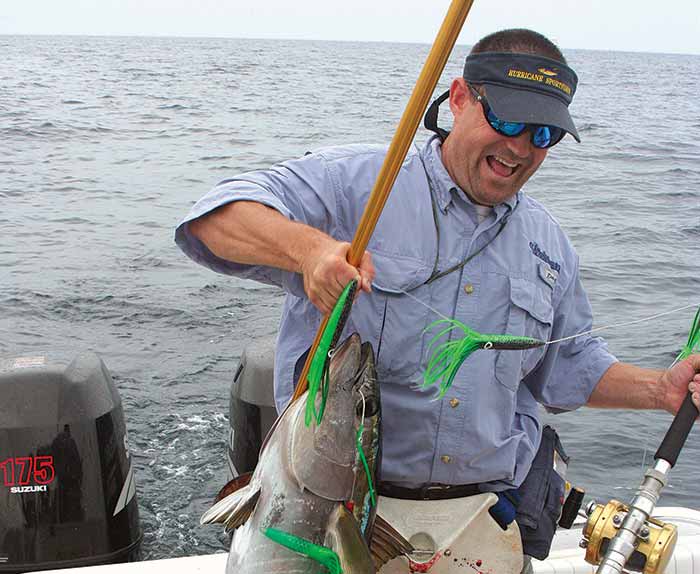 Gaffing is quite effective — and quite messy.

What are the downsides to gaffing? For starters, catch-and-release fishing isn't an option. Gaffing also makes quite a mess. You can expect your boat, clothes, and pretty much everything aboard to get splattered with blood and fish gore. You can also expect to lose a portion of the fish's meat to the wound a gaff creates. And then there's always the possibility of accidentally gaffing yourself, or a buddy. Don't laugh, it's happened plenty of times — and I have the scars to prove it.

Netting is one of the most common ways of landing fish, and for good reason. It's the safest and neatest way to get a fish into your boat. It's easy to master and can be done by a novice. But most people use a net simply because it's the least-risky method of landing a fish; once that critter is inside the mesh, it's almost certainly headed for the dinner plate.

There are, however, a few drawbacks to netting. For starters, you have to buy and carry a net. You also have to reach for it, which can be difficult when fishing alone. And with big fish doing their best to avoid being netted, it really becomes a two-man operation.