How To Get Your Claim Settled Faster

Knowing how the process works can make for a quicker and pain-free experience. 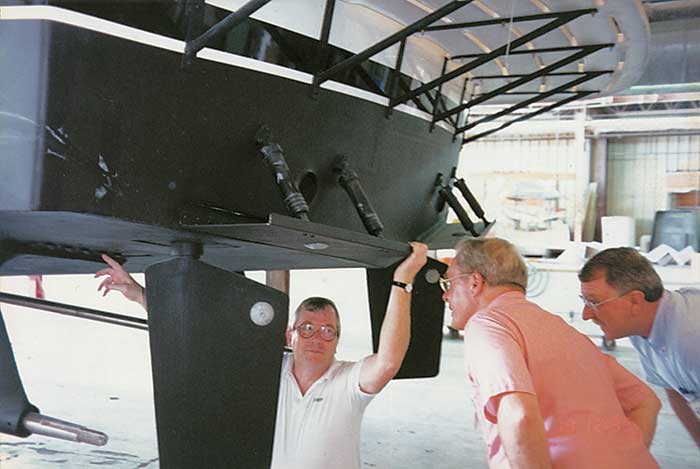 Sometime a couple of summers ago, Bill Meyers of Grand Rapids, Michigan, got a call from his teenage daughter and her friend who had decided to stay overnight on Bill's 36-foot Trojan. Something was wrong, she said. Bill had recently remodeled and refurbished the boat and couldn't imagine what the problem could be. The girls noticed that the power to the boat was off when they arrived, and when they flipped a tripped breaker, everything started working again. The main problem, they said, was when they opened the refrigerator for a cold soda, they were greeted with a smell that was, as the girls put it, gross! Just as important, they said, the new flat-screen TV wasn't working. With those critical items nonfunctional, the girls cut short their visit. Bill visited the boat the next day and found that most of the boat's electronics were not working. After talking to a couple of dockmates about a recent thunderstorm in the area, it was beginning to look like the boat had been hit by lightning. Fortunately, a quick check of the bilge revealed no water, and the boat didn't seem to be in immediate danger. At that point, Bill knew he needed help, and he called the BoatUS Marine Insurance claim center.

If you've ever had to file a claim with your car insurance company, you know it's a pretty simple and standardized process. In many cases, you simply call your insurance company, drive your car to an authorized shop, and a few days later you pick up your car, sign a document, and you're on your way. Boat claims are different because of the vast differences in boats, the lack of standardized repair parts, and the challenges of making sometimes complex repairs using a much smaller pool of repairers. Boat repairs also are often significantly more expensive than owners expect. Here's what to expect if you ever have to file a claim with BoatUS.

Step One: Reporting the Claim

The first step is pretty similar to how auto insurance works: you contact your insurance company, either by phone or online. If you call by phone, a BoatUS claims representative will take a "first report of loss" from you. They'll ask you several questions regarding the loss, such as how and where it happened, then give you some instructions, as well as a claim number. Then the company will assign you a claims adjuster, who will assist you through the claims process and will contact you within a day or so. They'll also ask you to provide a statement about what happened. (Note: This is a good time to take photos of the damage for your records.) The best way to avoid a potential coverage issue is to report any sort of accident immediately, so that the insurance company has every opportunity to determine the cause, nature, and extent of the claim.

For some people, human nature being what it is, making the first report is the hardest part. They wonder whether or not the claim will be more than their deductible, if the claim will raise their insurance rates, or if they should wait until they're sure they even need to file a claim. Susan Holler, assistant vice president and manager of BoatUS Marine Insurance Claims, says, "If you're not sure, call anyway, and call right away." The damage may look minor to you, but it could be much more expensive to repair than you think. And if the damages turn out to be less than your deductible, you can always withdraw your claim; if there is no loss payment, it's not considered a claim and will have no impact on your premium. Delaying the call can cause problems. One of the biggest issues, according to Holler, is when too much time passes between the moment the loss occurs and the first report of the claim to BoatUS Marine Insurance. If damaged parts were replaced and then discarded, for example, the insurance company can't verify the cause, nature, and extent of the damage, and your claim could be denied. In one claim, a boat took on some water, which damaged an air conditioning unit. The owner had the boat fixed and then weeks later called in a claim. Because the repair shop had thrown away the old unit, there was nothing to inspect, and a claim determination couldn't be made. Calling immediately prevents such problems. In the case of an injury — or even a possible one — it's even more critical that you call the claims department immediately. Holler notes that over the years, there have been claims involving injury to friends or acquaintances of an insured who got hurt on the insured's boat. Initially, the injured person told the owner that it was no big deal, so no claim was reported. Months or even years later, the surprised boat owner (and insurance company) was served with a lawsuit, something more common when there's a significant amount of money at stake — even with close friends. Don't ignore a potential injury. Calling the claims department right away allows the claims department to begin an early investigation and be better prepared if one of your guests later decides to sue or pursue a claim against you. Delaying makes investigating the loss much more difficult and can jeopardize coverage.

All policies require that an insured take all necessary steps to protect the boat and its equipment from further loss. Let's say a storm comes through and rips off your canvas canopy, exposing your electronics to more rain. Throwing a tarp over everything will reduce the possibility of further damage. If your boat sinks, immediate notification of the loss is critical so that the insurance company can make arrangements to have the boat salvaged. Once the boat is raised, you would need to make arrangements to have the engines flushed and pickled to avoid further damage while awaiting repair. If your boat is hit by lightning, it needs to he hauled out to inspect for hull damage. These things will mitigate damage, and the policy will pay reasonable expenses for them under the Sue and Labor provision, which is in addition to hull coverage.

Step Three: Get an Estimate

The next step illustrates another difference between auto and boat policies. Because of the millions of claims auto insurers deal with every year, they often contract with body shops who do the estimate, repair, and billing. With a boat claim, on the other hand, the insurance company will usually send out a representative, who could be a general adjuster or marine surveyor depending on the extent of the damage, to investigate what happened. For smaller claims, they may be able to prepare a damage appraisal on which your settlement will be based. For more extensive damage, you'll need to get estimates from reputable shops. It's your boat, so find a repair facility you're comfortable with, because your settlement will be based on their estimate. Tip: Don't use an automotive repair facility. They often don't know the need for special ignition-protected items in the engine room, and an auto body shop may not be able to adequately repair a fiberglass hull to withstand pounding on the water. If you've been assigned an adjuster or surveyor, try to schedule a time to be present during the inspection. No one knows your boat better than you do and surveyors welcome the opportunity to go through the damage with you. You might see problems you weren't aware of if you had not been there. Don't be afraid to ask questions. If you can, find recent maintenance records to send in with your estimate. Certain items, such as canvas or mechanical parts, have a limited lifespan and are depreciated over time. Don't sign anything related to your claim without contacting your claims adjuster.

Once you have the estimate from your chosen repair facility (or if an adjuster or surveyor provided the estimate), the BoatUS claims department will review it. If it's fair and reasonable and related to the loss, the claims department will approve it and provide you with a settlement letter detailing your loss-related settlement. Payment will be made (minus your deducible and any applicable depreciation), and you can then authorize your repair facility to begin repairs to your boat. Keep in mind that if you have a lienholder, payment will likely be made in your name and theirs unless they have provided written authorization to remove their name from the payment.

Step Five: Get Your Boat Fixed

Remember Bill's boat? The day after he called, the boat was hauled out, and a surveyor inspected the boat. Bill was right; the boat had been struck by lightning. In fact, two other boats in his marina had been struck by lightning during the same storm. The good news is that the surveyor didn't find any hull damage. The bad news is that most of the boat's electronics were damaged, including lights, radios, fish finders, TV, the battery charger, and a bilge-pump switch. Bill supplied estimates for the repair and replacement of the damaged equipment, and a check for the full amount was sent so Bill could get back on the water.

Advice From a Seasoned Expert

Alison Mazon, a surveyor in Portland, Oregon, has handled hundreds of insurance claims. Her best advice for a boat owner with an insurance claim is to be engaged in the recovery and repair of their vessel. It's the owner's boat, she says; the adjuster and the surveyor are only there to assist and the insurance company can only write a check. The owner, or an owner's representative, has to authorize any and all work done on their vessel and it is up to them to initiate it.

What Not To Do

The owner of a 31-foot powerboat in Louisiana stored his boat on the hard for several years. He called the Marine Insurance Claims Department saying the engines and generator on his boat were somehow water damaged and wouldn't start. Unfortunately, the yard had already nearly finished the repairs, and most of the parts had been discarded. BoatUS sent a marine surveyor to inspect the boat and found that aside from a rusty engine block and a dismantled generator, there was nothing to inspect and therefore no way to approve the claim.