When A Squall Comes Calling

Let's take the experience of a squall coming your way, which could happen to anyone, and look at ways to handle it. 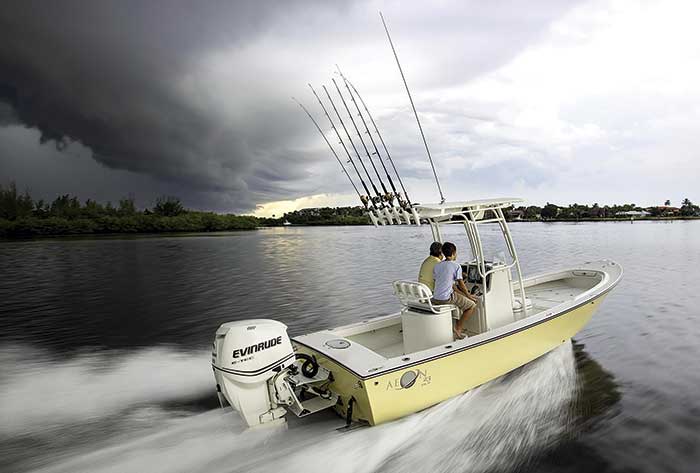 Fortunately, most afternoon thunderstorms last less than half an hour. But even a "routine" squall can turn threatening and scary when combined with mechanical failure. You might be able to make it to a protected anchorage before the squall arrives and then be on your way afterward with no drama. Or, you can employ several effective techniques to deal with oncoming threatening weather.

First, check your weather before going boating, even for a day. If you're heading out on a longer trip, especially on a boat you're not very familiar with, be extremely conservative weather-wise. If a front is predicted, or thunderstorms, assume there will be squalls parading around and wreaking havoc. Wait it out and take a lay day. If you do set out, have a backup plan for seeking shelter quickly along your route, vigilantly check the weather. Squall lines can often be seen on the horizon, giving you time to take evasive action. If everyone is wearing life jackets, that's one less thing to worry about when the weather pipes up. Once facing deteriorating weather, you've got three tried-and-true options, depending on how far offshore you are and what kind of boat you have.

If it's clear you can make landfall before heavy weather hits, do it. Don't wait to see if things get better. They rarely do, especially if gear starts to break. Find a harbor of refuge, cove, marina, or at least a protective shoreline with good holding for anchoring. The best choice is one that limits the fetch of storm-driven waves and blocks the worst of the wind. Put out enough line to create a scope of at least 3:1, make sure your anchor has dug in, then let out additional line to create scope of at least 7:1 — more if you're on a rode that's mostly rope and have swinging room. Secure the wheel or tiller in the center of the boat to increase stability; don't let it spin around. If you hear thunder or see lightning, go below if possible and avoid touching metal. Put on your shoes, stay low but never lie down, unplug electronics, if possible. Lower antennas. Stay out of the water. Touching two metals at the same time completes the circuit, one way people are killed by lightning.

If there's no lightning but strong winds, and your engine is in good working order, the most experienced person can stay at the helm and motor forward into the wind just enough to take the pressure off the anchor; this helps you avoid dragging, until the squall passes. In a driving rain, the helmsman may want to don swim goggles to take the sting out and wear rubber gloves when touching the wheel. Remember, lightning is still a danger for at least half an hour after a squall passes. 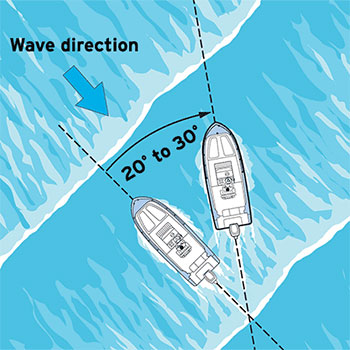 If anchoring isn't possible, motoring slowly into the wind and waves permits most boats (power and sail) to make a bit of headway, maintain control, and take waves over the bow, minimizing the chance of swamping. The size and design of a boat, the propulsion power available, the experience level of the crew, and the severity of the squall all have their part to play in how a squall is best handled. Powerboats with open bows, such as bowriders and center-consoles, are vulnerable to swamping, so take the waves at a 20- to 30-degree angle; make sure to keep the boat moving fast enough so that the bow lifts over the waves, but not so fast that it buries on the other side. To maintain control, you may need to throttle up on the wave face, then throttle back as the wave passes under you. In this way, you can jog slowly to windward, making minimal headway, until the squall has passed.

Many sailboat mainsails have only two reef points and, in many cases, even pulling down to the second reef still may prove too much sail in a strong squall. In this case, it may be best to take all the sail down and motor slowly to windward. If you're confident in the boat, then leaving a patch of sail up on a larger, well-ballasted sailboat and motorsailing at a 20- to 30-degree angle to the wind can steady the boat and minimize the amount of water coming aboard. In smaller, lighter sailboats, it's often best to drop all sail before the squall hits and motor slowly to windward; if the boat gets even a little sideways to the wind, you risk loss of control or even capsize. 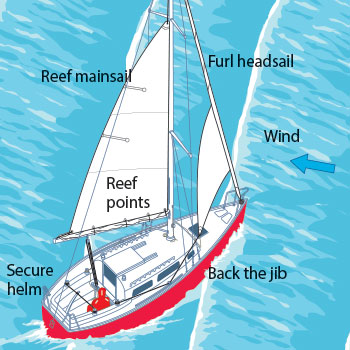 Sailboats can heave to, which will all but stop the boat in a controlled way, an invaluable technique — like engaging a handbrake on a car — that can be used in a short squall so long as you have room around you. Reef and sheet in the mainsail and partially furl the headsail. Then tack the boat without releasing the jib sheet (which backwinds the jib), and secure the helm; this holds the boat with the bow 20 or 30 degrees off the wind. With the sails and rudder balanced against one another, the boat will steady itself and drift slowly downwind, usually at no more than 1 knot. Heaving to takes practice, and its effectiveness and the precise tactics depend upon your boat's design. To make sure you're ready to employ it when you need it, head out on a day with strong but steady winds and practice. Your maneuverability will be limited when hove to, so don't try it in a ship channel in poor visibility.

More Smart Tips For When The Weather Turns Bad