Trolling is a popular method of fishing for species ranging from walleye to wahoo. But many anglers could be more successful trollers if they honed their techniques. 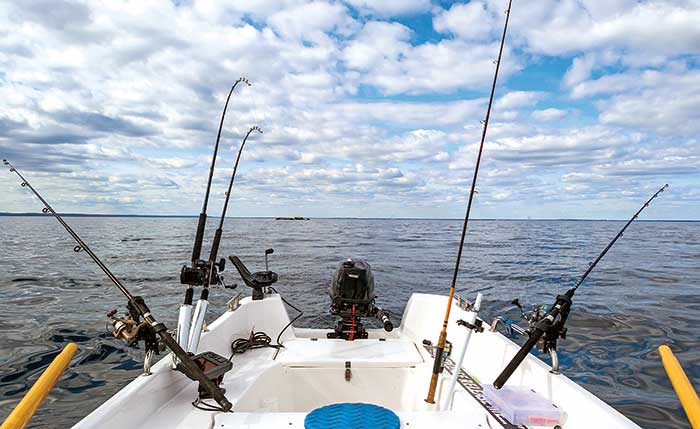 Trolling is a technique employed for a wide variety of species, from coast to coast. (Photo: Thinkstock)

No matter where you fish and what you fish for, chances are you employ trolling techniques now and again. The question is, just how good are those techniques? While trolling seems straightforward — you drag lures or baits behind a moving boat, to make those lures or baits look alive to the local predators — there are countless details that separate the pros from the amateurs. 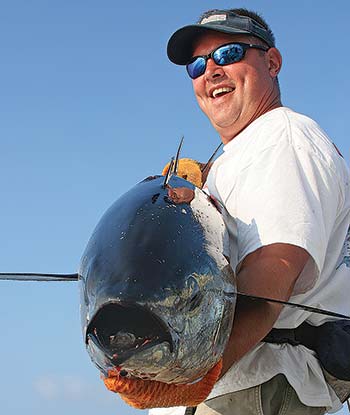 As with many predator species, whether or not a tuna strikes
often depends on finding the proper trolling speed. (Photo:
Lenny Rudow)

While most trollers know enough to find out what speed is appropriate for the fish they're targeting, few remember to take the environmental factors that cause drift into account. Drift is extremely important, especially in saltwater, or rivers where you may have significant currents to deal with, because it changes the speed of your lures as they move through the water. If you know basic navigation, you already know the difference between SOG (speed over ground) and STW (speed through water). When it comes to trolling, STW is the one you need to worry about. That's the speed the fish are concerned with, and it's the speed that dictates the action of your lure or bait.

For many trollers, this means using a paddlewheel speedo instead of the GPS to set their speed when they begin trolling. Bad move. Paddlewheel speedometers are notoriously unreliable. Something as tiny and common as a little sprig of seaweed can throw them off, and even the best paddlewheels need constant calibration. How, then, are you supposed to find the best trolling speed? The answer lies in your lures. Savvy trollers set the speed that they think is about right, then hold one of their offerings over the side and watch it "swim" through the water. Does that plastic shad look lifeless? Is its tail gyrating spasmodically? Or does it appear to swim through the water more or less like a fish? When it appears to be swimming, you've found the right speed.

Now that you've got boat speed set, we can move on to other topics, right? Ummm, not so fast. If you can guess why, give yourself a bonus point. As soon as you change course, the tide changes, you enter an area with a different current, or the wind significantly changes, you'll begoing the wrong speed again. So this isn't a set-and-forget proposition. You need to constantly pay attention, and even if you don't believe anything has changed recently, recheck the action of your lures every hour or so by holding one next to the boat and watching it.

Finally, we can move on. Not! There's one more thing you need to know about speed: when your results are lackluster, change it. Far too many anglers putt-putt along, waiting for the bite to pick up or the tide to change, when a small variation in speed might have made all the difference in the world. So if fishing is slow, try inching the RPMs up a notch. Or slowing them down. Now, let's say a slight change in speed works, and you start catching. If you can guess what you should do next, you'll get double-bonus points: hold a lure next to the boat to see how it's swimming — and remember exactly what it looks like moving through the water at that boat speed.

Another variable many anglers fail to remember is the depth of their offerings. They may let out a little more line when they see fish down deep on the fishfinder, or maybe they pull the lines up a bit when the fish appear to be shallow. But this makes about as much sense as pointing a gun in the general direction of a target, pulling the trigger, and somehow expecting to magically hit the bull's-eye. Unfortunately, the list of factors affecting the depth at which your lures should run is long and varied: current, lure weight, lure shape and size, line diameter, and several more. 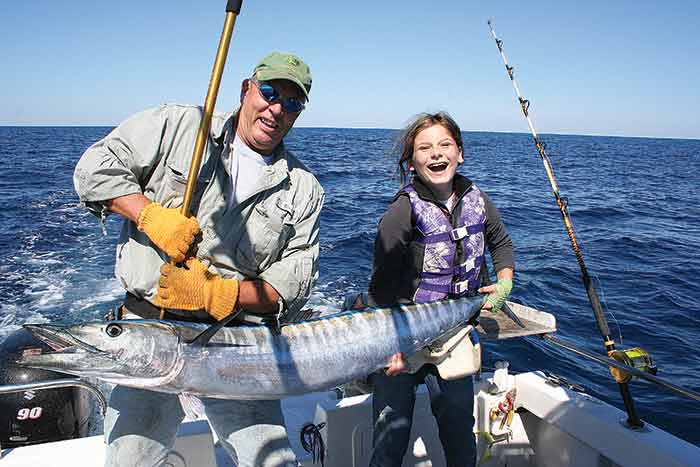 Mollie, 12, caught her first wahoo on the troll thanks to lures set at the proper depth. In this case, a diving planer was employed to get the offering deep down beneath the surface. (Photo: Lenny Rudow)

Lucky for you and me, there's a general rule of thumb you can use to get a feel for where those lures are running. It's called the Rule of Fives. When trolling at 5 mph with 5 ounces of weight and 50 feet of line out, your lure will be about 5 feet below the surface. Of course, it's rare that you'll be going exactly 5 mph, using exactly 5 ounces, and letting out exactly 50 feet of line. But by using the Rule of Fives, you can do some simple math to estimate about how deep your lures are. 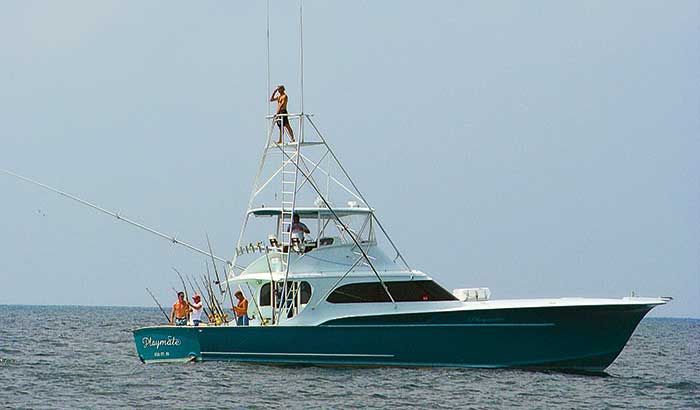 Outriggers, like those on this sportfish, help spread lures out to cover more water with each pass. (Photo: Lenny Rudow)

If all of those lures are at exactly the same depth, by the way, you've just violated one of the cardinal rules of trolling: always set a few lines at different depths. Not only will this help you hook up when the fish are scattered throughout the water column; it will also help you catch bigger fish now and again. The real lunkers often segregate themselves from the bulk of the school, and if all of your lines are set to pass by the hordes of fish you see on the meter, you might never hook into Bubba, who may be swimming along 10 feet farther down.

OK, you now have determined the right boat speed, and you're pulling your lures along at the proper depth. That already puts you ahead of 75 percent of the other anglers plying the same waters. But you can do even better. Here are five general trolling tips that will help you out-fish all the competition the next time you try trolling.

Top destinations, domestic and abroad, for a 2023 fishing vacation you'll never forget — including fun spots for the nonanglers in your group.

A weekend boater gets hung out to dry when she joins the enthusiastic fray of Radio Control Sailboat Racing.

Sailing By Women, For Women

The 2023 Sailing Convention for Women draws female sailors from different generations and backgrounds to share their knowledge, skills, and camaraderie.