The Fine Art Of Anchoring 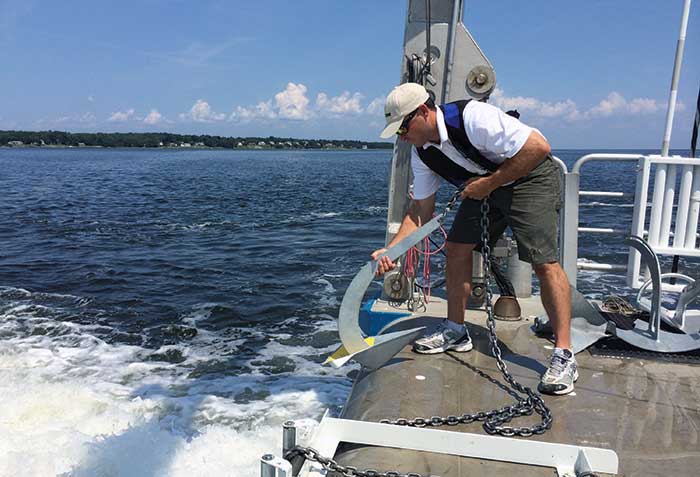 For as long as humans have been floating around on the water in vessels, they've also needed a way to hold those vessels in place when not underway. One suspects that, from the very beginning, they have also argued about the best way to do that. And for as long as humans have been doing anchor tests, you can bet they've been arguing about the results, as well as the methodology, the bottom, the conditions, and the validity of the whole darn enterprise.

Recently, the Seaworthy editors were invited to observe the most sophisticated and comprehensive testing of anchors to date. Fortress Marine Anchors, from Fort Lauderdale, Florida, organized the event to test 11 different anchors to determine the holding power of each in a typical soft mud bottom. The huge amount of data gathered during the tests shed some light on how well different anchors work, but as good science tends to do, also produced many questions, along with some surprises. The testing confirmed what many of us already know: Anchoring tends to be as much art as science and — even in the most controlled of circumstances — can be unpredictable. Despite that, every anchor test adds to our knowledge, not just of holding power in specific bottoms and under specific circumstances, but also of the importance of technique and experience in anchoring success.

The anchors were tested on a typical soft mud bottom, the kind in which many boaters routinely anchor. The location at the mouth of the Patuxent River near Solomons Island, Maryland in the southern part of the Chesapeake Bay was chosen because of the relatively consistent mud bottom — and the proximity of a first-class testing platform. The r/v Rachel Carson, a 5-year-old, 81-foot aluminum vessel owned by the University of Maryland Center for Environmental Science, is used most often for scientific research in Chesapeake Bay. She was selected because of her ability to use her twin 1,200-hp diesel jet drives and bow thrusters, combined with a state-of-the-art dynamic positioning system, to "hover" motionless over one spot regardless of wind and current. She is equipped with an aft winch that is capable of reading how much line is paid out to the inch and precisely controlling the speed at which it is paid out or retrieved. These last two things were important because they allowed precise and repeatable testing for every anchor. 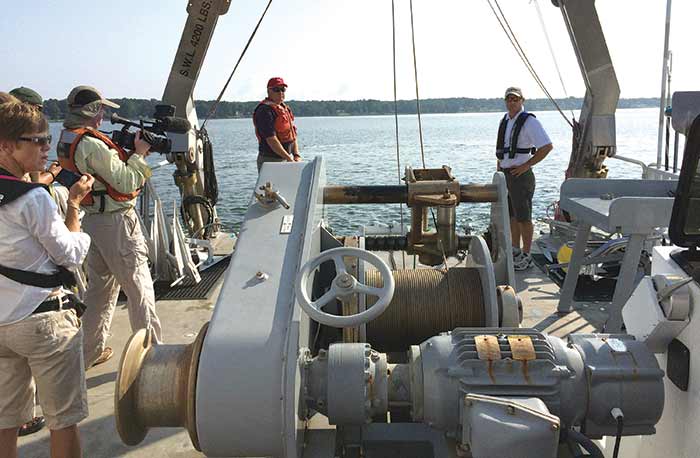 Each anchor was attached to 20 feet of 3/8-inch chain, which was in turn connected to a 5/16-inch wire rope. The anchors were lowered by hand to the bottom of the bay and then the wire rope winch paid out 200 feet of wire over the stern while the boat moved forward at the same speed. The depth was pretty consistent at around 27 feet, and the aft deck of the vessel where the testing was done was four feet above the water, giving an initial scope of about seven to one. Once the wire was paid out, the vessel stopped, the captain actuated the dynamic positioning system, and the winch began pulling the cable at 10 feet per minute for 10 minutes until 100 feet had been pulled in. This had the effect of decreasing the scope gradually to about four to one and giving each anchor 10 minutes to engage the bottom.

The pull was recorded by a custom-built strain gauge that measures the force in pounds while sophisticated software recorded a real-time graph of each anchor's holding power as it was hauled along the bottom. Each anchor was selected at random to be tested a total of five times over the course of three days. The vessel moved to a slightly different location between sets so that each anchor was pulled along a different trajectory, ensuring no anchor fell into the furrow of another.

The one thing you can predict about anchoring is that it's often unpredictable. The seabed (or lakebed) can vary from rocky to sandy to muddy and every combination in between, and the composition can change from one area to another within a few feet or from layer to layer as an anchor buries itself deeper. This makes it particularly tough on anchor designers because they want their anchors to set and hold in all kinds of bottoms, at varying scopes. 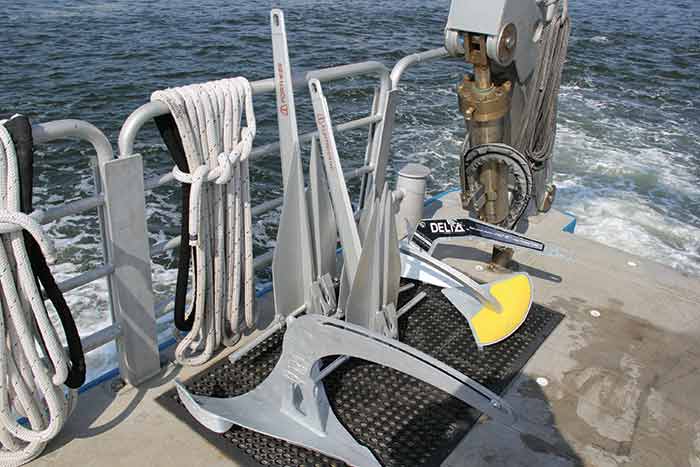 At this point, we'll cut to the chase and tell you that the Danforth and Fortress anchors, with their long, wide flukes, held in the mud with the most tenacity. See the sidebar for some other observations from the data. Download a copy of the test results for each of the anchors.

The tests revealed more than the holding power of each anchor. How soon and how hard an anchor initially set could be determined as well, by observing the graph. The tests found that the anchors that set the quickest and hardest were usually the ones with the sharpest flukes. Also, the difficulty in retrieving an anchor showed how deeply it had buried as it brought up mud, oyster shells, and clay from the bay bottom.

It's not a huge surprise to those who have anchored often that a lot of the anchors didn't set right away. When anchoring in the real world, most boaters know to let the anchor settle before they begin to back down on it. It took between 10 and 20 feet for most anchors to reach 300 pounds of holding power, a bare minimum to consider for an anchor of this size. During this period, it would often look as if the anchor was starting to set as the tension increased, only to have it break free again and the tension drop back down. A boater could easily be fooled into thinking that the anchor was set, even though it was just barely hanging on. Putting the boat in full reverse and powering back against the anchor for more than a minute after it appears to be set would ensure that the anchor had really found the bottom. 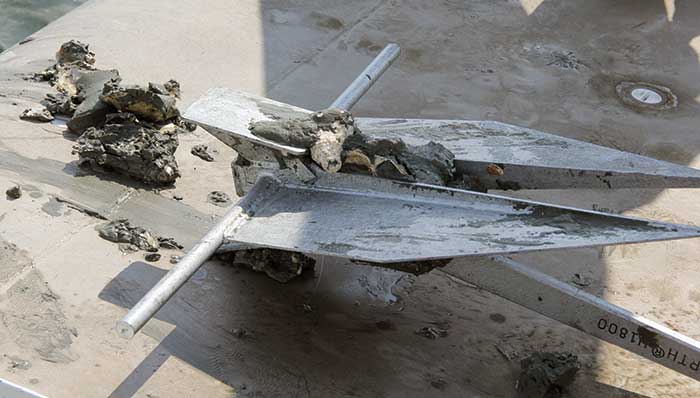 What was most striking was the lack of consistency in the results for the same anchor. Most had one good set that far exceeded the rest, and almost all had one trial where the anchor did not seem to engage the bottom at all. During the first test done with the Fortress 37, with its ideal 45-degree mud-bottom fluke angle, it failed to set during the entire 100-foot drag. Chagrinned, the Fortress representatives nervously joked that at least it was obvious the test wasn't rigged in their favor. Subsequent tests demonstrated the Fortress' mighty holding power, but the failure on the first set proves that no anchor will set perfectly every time, and if you want to be certain of staying put, you need to check the set and reset if necessary.

Several observers commented on how helpful it would have been to actually view the anchor's behavior as it set and dug in so they could see what was really happening. Unfortunately, the turbid water of the Bay made that impossible. Most people know that there is no one anchor that holds in all conditions. Some anchors do very well in sand, some hold better in mud, and some excel in grassy bottoms. What makes one anchor work well in, say, sand tends to limit its ability in mud and vice versa. At the very least these results attest to the variability that can be experienced using the same anchor in the same bottom. That could be due to differences in the consistency of mud or clay layers the anchor finds on each set, to shells or gravel that foul the anchor, or to the way an anchor lands and how well it does or does not right itself — among other things. All of this reinforces the need to have a variety of anchors aboard, to use the right one for the conditions, and to switch anchors if one just won't set. 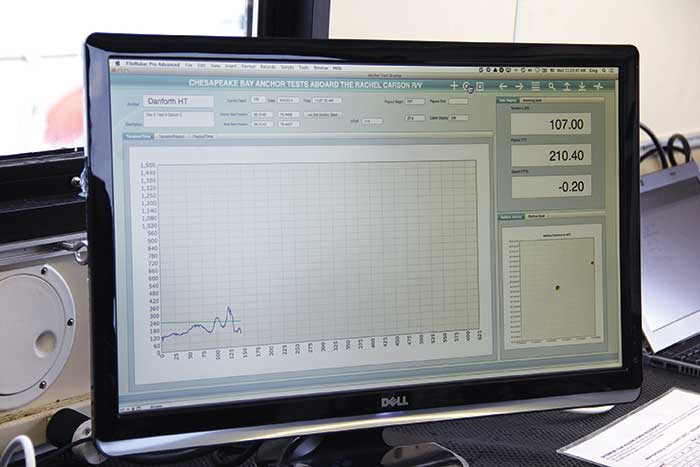 Testing an anchor while pulling it along the bottom might seem contrary to what an anchor is actually supposed to do — stay put. But anchors do move, especially during a blow, and a test of how well they resist being dragged across the seabed can be illuminating. Anchors need to remain buried under strain, rather than simply giving up. 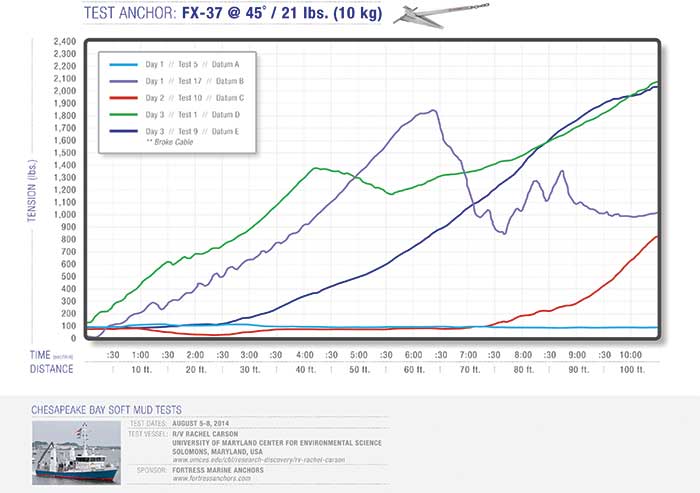 But there were some things the tests couldn't measure. For example, a straight-line pull test can't predict how well an anchor will reset during a wind shift. The tests also can't tell the ultimate holding power of a wellset anchor that's subject to dynamic loads, such as when wind and waves act on a boat. Finally, the results hold for just this one bottom. But there are so many different types of bottoms that testing in them all would be an overwhelming undertaking.

No anchor test will ever manage to be complete, and despite all the caveats, the process was a commendable attempt to conduct consistent and comparable straight-line holding power tests in a specific bottom. While the testing wasn't perfect and won't begin to satisfy everyone, it succeeded in adding to the limited body of knowledge that exists about anchoring and to confirm that anchoring remains as much fine art as hard science.

The first thing you notice when you flip through the charts (see the test results for each anchor) showing the holding power of the various anchors is how few of them exceeded 700 pounds, the American Boat and Yacht Council's calculated load in high winds for a 30-foot boat. In fact, 5 of the 11 anchors only reached 700 pounds once. The Fortress FX-37 reached 700 pounds on four sets out of five at both fluke angle positions, but the fifth set in both cases barely reached 200 pounds of tension. The FX-37 at the 45-degree fluke angle was the overall holding power winner with three sets holding over 1,000 pounds and two sets exceeding 2,000 pounds.

While the Fortress and the Danforth clearly outperformed the claw- and plow-type anchors in holding power in this soft mud bottom, the differences between trials for the rest of the anchors are much more mixed. The Mantus and the Ultra were the only two that exceeded 700 pounds of tension on three of the five sets. All of the other anchors reached 700 pounds on only one or two sets. The "next-generation" anchors did not perform any better than the older designs, and there was some speculation as to whether those anchors were landing upside down and not righting themselves.

If you're going to be anchoring in soft mud, the Danforth or the Fortress will deliver the most holding power, and both are relatively lightweight and easy to stow compared to their plow and claw counterparts.