With today's electronics, you can tell if your anchor starts dragging without leaving your bunk. But make sure you understand your system's limitations. 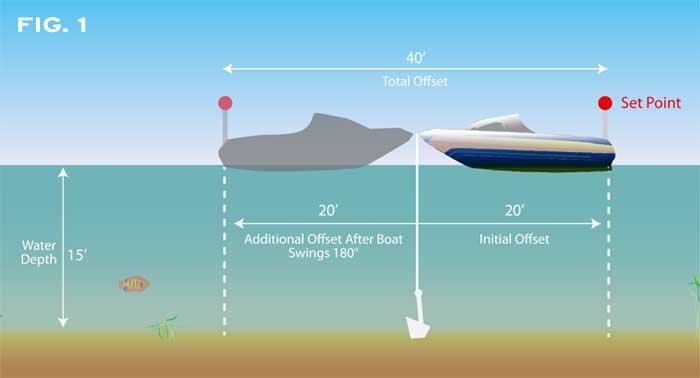 It's a pitch-black, nasty night with rain blowing sideways, and your concern about your anchor dragging sends you topside again to shoot bearings through lightning on distant landmarks. You escape below only to have your pencil tear a hole in the soaking-wet chart while triangulating the boat's position. Thankfully the days of wooden boats and iron men are behind us. Today, with just a few keystrokes, you can have an electronic box stand the middle watch, allowing a few hours of shut-eye. The challenge lies in understanding the limitations of the different anchor watch systems and choosing which to use.

Almost all anchor watch systems rely on the global positioning system (GPS), a revolutionary aid to navigation that is nonetheless prone to errors that must be compensated for when used to monitor the boat's position. Anchor watch systems work by creating a security zone around the boat, which is the electronic circle the boat is allowed to wander around in without tripping an alarm. To prevent false alarms, that circle must be large enough so the normal movement of the boat, and the inaccuracies in setting up the circle, don't cause the anchor alarm to go off. Remember, the GPS tracks the antenna, not the anchor, and the electronic center for all alarm calculations will be at the set point, the position the antenna was in when the system was activated. To prevent false alarms, the security zone must then take into account the following factors:

Consider a boat on 75 feet of scope with the GPS antenna located 20 feet back from the bow, creating a total offset error of 40 feet when the boat swings 180 degrees. With the boat pulling to the limit of its scope, the GPS antenna could be a maximum of 115 feet from the set point. To avoid false alarms, add 16 feet for signal errors and 20 more for human error. The security zone radius is a total of 151 feet (Figure 2). We could set a tighter zone but that invites false alarms.

As a general rule of thumb, if your security zone radius isn't somewhere around double your scope (meaning a diameter four times your scope), it's probably not big enough. With practice, you'll get a good idea of your average human error and may even be able to reduce or eliminate it with good anchoring technique. Most signal errors are beyond your control, but proper equipment installation will eliminate some.

Most GPS units, even handheld, include an easy-to-use anchor-watch feature. For directions, refer to your owner's manual. Smartphone anchoring applications have proliferated in recent years, and some of the offerings give a lot of bang for the buck. These are still GPS-based systems with all the limitations described above, and care needs to be taken when choosing both phone and app.

Phones with built-in GPS work best because they don't require communication with cellular towers to establish their position. Those without an internal GPS stop monitoring when cell reception is interrupted. The GPS function and screen take quite a bit of power so choose an app that monitors even when the phone sleeps, and keep it plugged in when it's "on watch." Phones have small antennas resulting in poor reception belowdecks. To work well, the phone may need to be kept far from your bunk in a place where it gets a good GPS and cell phone signal, making a loud alarm imperative.

Apps are rarely subjected to the rigorous testing done by marine equipment manufacturers to ensure the system works as advertised. App support is often difficult to find, and few companies offer recourse if you have problems. But these applications make a good backup to your marine systems, and offer extra protection when used with them.

If you already have a compatible phone, an app with a short messaging service (SMS) function will alert you to a problem when you're off your boat, as long as you and the boat are in range of a cell tower. Out of the hundreds of anchor-monitoring applications available, Table 1 compares a few that have unique features.

For maximum safety, set additional alarms on devices that utilize technologies other than the GPS system. Almost every depth sounder has an alarm that can be set to warn of changes. This is of little use if the bottom maintains a constant depth to a hazard, but can be very helpful otherwise. Security zones can be set on many radars to warn if something crosses into them, including another boat in a crowded anchorage. Plotters that combine GPS, radar, and depth into a single alarm function greatly enhance security. High power consumption and false alarms are disadvantages of these systems, but some have the advantage of communication features that allow monitoring from afar.

Motion-sensing anchor-monitoring systems cost several thousand dollars and use a sensor attached to the anchor to measure its movement to the inch. If you decide to spend the money, choose a system that transmits the sensor information through sonar because equipment using cables running from the boat to the anchor tends to suffer tangles.

Anchor-monitoring systems can make the difference between ending up on the rocks and taking action in time to save the day. But they're all fallible. Using several in combination with common sense, plenty of scope, and smart anchoring techniques can greatly increase the safety of boat and crew while keeping you sleeping soundly in your bunk. 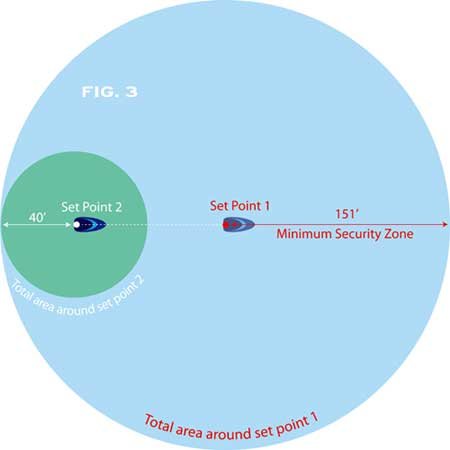 Here's a technique that can be used to greatly enhance GPS anchor-watch security and reliability (Figure 3). Start by setting an anchor alarm on one device by placing a security zone around the entire diameter of your swing. Once the boat has fallen back and is resting to prevailing wind and current, use a second device to enable a set point with a minimal security zone surrounding the boat — a radius of about twice the boat length.

This zone will not result in false alarms if wind and current do not change so the boat remains relatively stationary. If the boat drags, both alarms will sound, alerting you instantly. If the wind direction changes, the second device will go off but not the first, so you can start a real anchor watch. Once the boat stabilizes, enable a new set point on the second device and head back below, confident in the redundancy of the two anchor watch units.

Gaz and Liz Haring have cruised the ICW from Mexico to Maine aboard their power cat Pegasus, including a few jaunts out to the Bahamas.