Whether pontoon or deck, powered by engines big or small, lake boats excel at entertaining your guests, and lots of them at that. Maybe it's time you toon'd in? 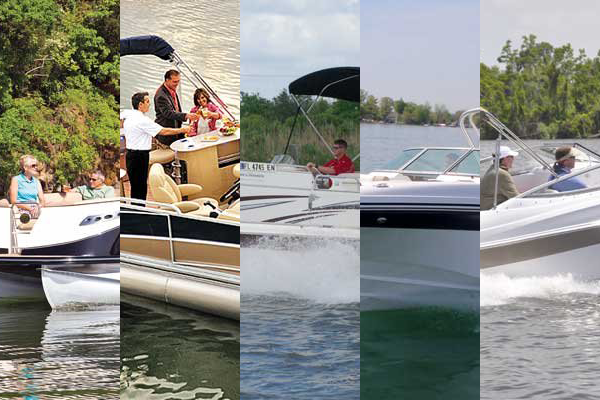 Back in 2009, when the boating industry sank into recession, there was one bright spot on the horizon — pontoon boat sales. While they had dropped off steeply with the rest of the industry, pontoon boat sales rapidly mounted a comeback, posting four straight years of gains while the rest of the industry remained basically flat. Up 20 percent last year alone, pontoon-boat sales have rebounded to 2008 levels and could soon reach peaks not seen since 2005.

Several driving factors are at work here. First, pontoon boats' inherent accessibility — both physically and price-wise — appeals to an aging boating population as well as value-conscious consumers. Their versatility — you can fish, ski, or entertain on one — make them easier to justify than a single- or dual-purpose boat. And then there's the cool factor. That's right, I said cool. While fiberglass boat builders face significant upfront costs when designing a new model in the forms of hull molds, deck molds, and tooling, the hull and deck of a pontoon boat doesn't change much. That leaves pontoon boat builders free to experiment on the topsides. And they've gone wild. The new Crowne model from Harris Flotebote won a 2013 Innovation Award from the National Marine Manufacturers Association for its striking appearance and high-end appointments. Features usually thought of as being found on larger yachts, such as wet bars, radar arches, and aft facing lounges, are now common on high-end pontoon and deck boats.

Modern pontoons have also leaped forward in the performance department. With the addition of a third "toon," between, and lower in the water than the outer pontoons, builders are making sport versions, running outboards up to 300-hp on the stern. Now, it's not only easy to ski or wakeboard behind a pontoon, you can look good doing it.

The flagship of the Flotebote line, the new Crowne 250 simply doesn't look like any other pontoon boat you've seen before. A forward raked radar arch echoes the scimitar-curve of the side panels. Inside, soft lighting peaks out from under the raised counter of the wet bar, and surrounds speakers and cup holders, spilling onto faux-teak decking, or woven seagrass floor coverings. Aft-facing lounges overlook the swim platform just past a stainless-steel gate and rail. The sophistication of the Crowne 250 belies the humble origins of a pontoon. 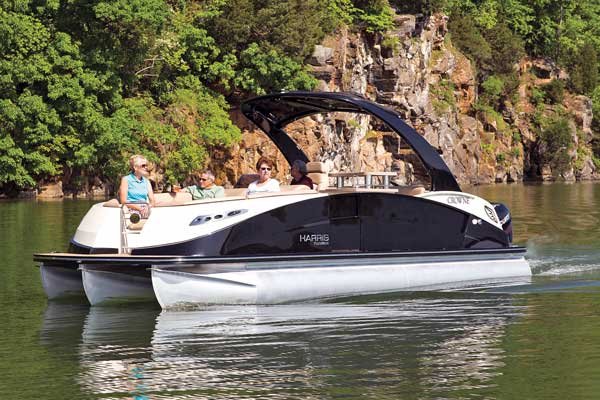 The "E" stands for entertainment and this model, from Berkshire's premium series of pontoons, features a wet bar with built-in stainless-steel drawers and refrigerator, a separate entertaining bar with four stools, LED lighting, and a propane grill in yet another corner of the boat. Even with the rear half of the boat devoted to food and drink, the forward half still has plenty of seating, with L-shaped lounges port and starboard, with a small table in the center. If you're into watersports as well as entertaining, the 250E can be upgraded with a triple-toon BP3 package, allowing outboards up to 300-hp to be hung on the stern. 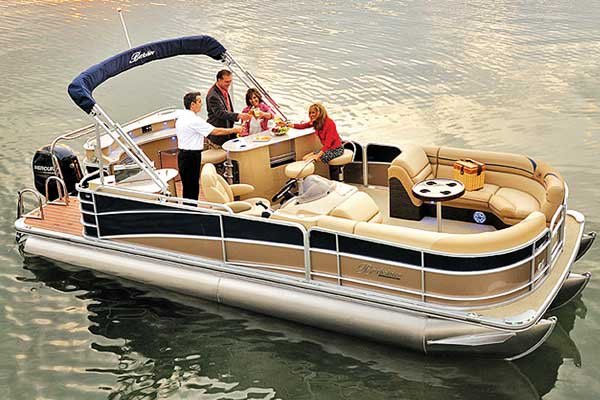 Carolina Skiff shook up the definition of a pontoon boat by introducing the Fun Chaser series, with pontoons made from fiberglass rather than aluminum. Billed as a more salt-water friendly option (though many builders offer saltwater packages now), and built with stainless-steel components, the twin-fiberglass hulls do add a tremendous amount of storage, enough to swallow a 70-quart cooler in one compartment in fact. Other family-friendly features include a stainless-steel propane grill that mounts on the rail and locks away when not in use, and a pop-up changing curtain. 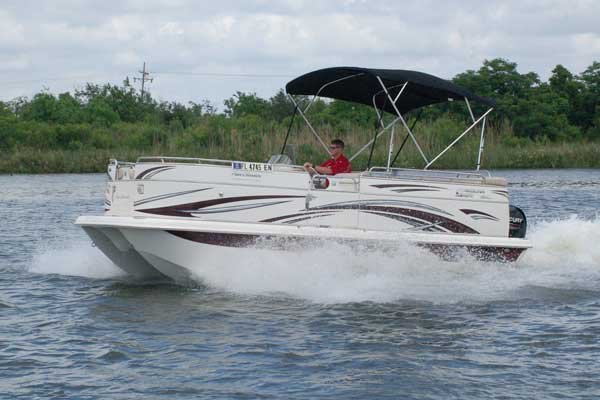 If your boating requires more freeboard than a pontoon boat offers, a deck boat may be a good choice. Unveiled at the 2013 Miami boat show, the Hurricane Sundeck 2690 sports a new hull design from C. Raymond Hunt Associates, a nine-foot beam, and is designed to run with outboard power up to 350-hp. With a squared-off bow that features a forward swim platform with integrated swim ladder and plenty of seating in front of the windshield, the Sundeck 2690 is built for fun on the water. To port, across from the helm seat is an enclosed head with sink. Immediately aft of the helm seat is the standard electric grill powered by an inverter and sink, with an optional refrigerator available. At the stern, the builder snuck an "Integrated Cooler Enclosure," (ICE) into the portside lounge. But unlike other coolers under cushions, this one has a small sliding lid under an equally small cushion panel . Lift the cushion panel, slide back the lid, and fish out a cold drink, all without having to move out of your seat. 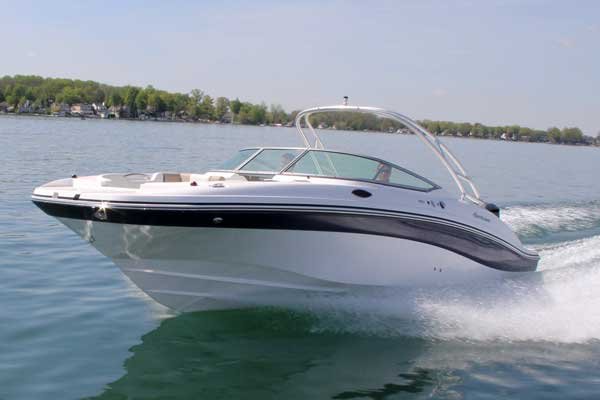 SouthWind builds its deck boats with an emphasis on being saltwater ready, with no-wood construction and the same stainless-steel components used on their sister-brand's Sailfish fishing boats. The 212 SD features a full head, with sink and shower, which you won't find on most 21-footers, plus insulated coolers both bow and stern, and a freshwater wet bar. Powered by a Mercury outboard from 115- to 250-hp, the 212 SD pairs nicely with the 200-hp Verado, which is how the boat I drove recently was equipped. The boat also had the optional MercMonitor digital gauges that can display up to 42 different functions, three pieces of data at a time, and the MP (Moving Prop) Alert system. The aft-mounted warning light, a ring of six amber-colored LEDs that spin when the prop is in motion, tells a swimmer at a glance whether or not the outboard poses a danger. 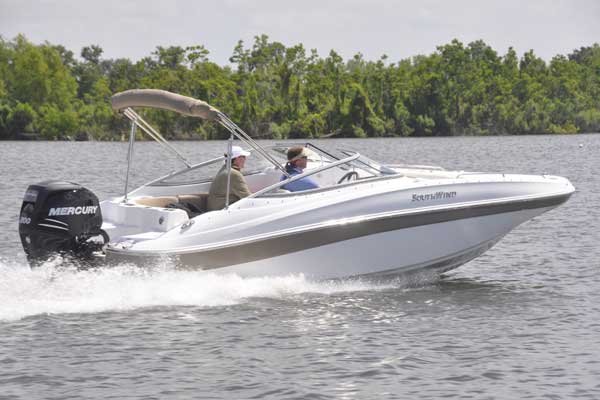 Michael Vatalaro is the former executive editor of BoatUS Magazine. He has a Pursuit center console, which he uses in the Chesapeake Bay.