Create Your Own Wiring Diagram 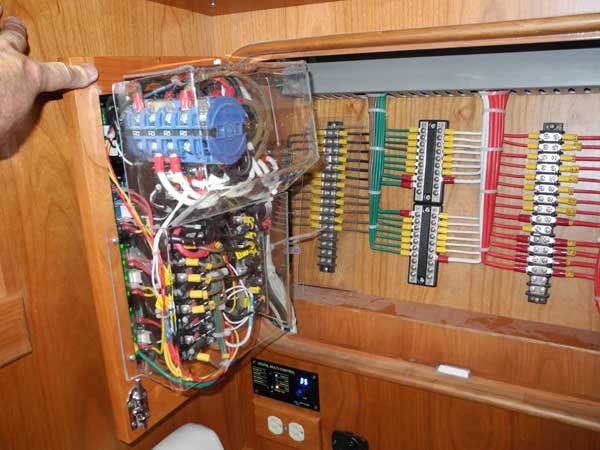 Whether you want to install a new stereo system or trace an intermittent electrical fault, a wiring diagram will save you hours of aggravation. The older your boat, the more likely you are to have either no wiring diagram or one that's worse than none because it's inaccurate. Making your own isn't rocket science, but it does take time, patience, and care. You won't get it all done in a day — or even several weekends — and don't let yourself get intimidated by complex electrical diagrams. Start by focusing on the simpler (and safer) 12-volt DC system aboard your boat. With each wire you trace, and circuit you complete, it gets easier. Eventually you'll have a map of your entire electrical system and a thorough understanding of how the pieces are tied together.

On many boats there are two types of current: alternating (AC) and direct (DC). Serious damage and even electrocution can result from confusing the two. In recently built boats, the two systems should be clearly differentiated and separated, including at the electrical panel. Wires and components associated with each should be distinct and, on newer boats built to American Boat and Yacht Council (ABYC) standards, will use standard color-coding. See chart at below.

AC wiring for 110 volts usually has white for neutral, black for hot, and green for ground (220-volt AC lines have a second hot wire, colored red). Those three wires typically are enclosed in white or gray insulation. You'll see the colored individual wires when they exit the common sheathing at each end. Your diagram should have one line for those three enclosed wires, except as necessary to differentiate them at the ends.

The wiring colors on your boat may be very different, especially if it's older and there's been a lot of "jury rigging" in its past. Make no assumptions about which wires do what. Trace each wire in the circuit from the electrical source to its use. Wire colors will assist you in doing that, even if they don't follow ABYC standards, by helping you identify the far end where it reappears from a conduit or a locker on its way to the equipment it powers.

On boats with both AC and DC systems, the DC system is generally simpler. DC power originates from the battery banks, so there is only one source. The DC electrical system is grounded through the negative bus of the distribution panel, which in turn is grounded through the engine negative terminal or its bus. That means that only two wires run from the distribution panel to each consumer of DC power — a DC positive and a DC negative — versus the three or four wires for each AC electrical user. The simplicity of the DC system, along with its relative safety in comparison to AC, makes it a good place to start.

Take a careful look at the electrical systems on your boat, listing sources and uses for both AC and DC current. If it runs without the inverter when only battery power is available, it belongs on the DC list. A general idea of how each is connected will help you anticipate what to draw. If you have a good wiring diagram, copy it and blow it up so that you can make clear notes and changes in the future. Anytime you change the wiring or electrical components, write it on the diagram. If you don't have a good diagram, or you're intimidated by the arcane electrical symbols on the one you have, make one from scratch using large paper.

Starting with the batteries, follow the wires through to the end users, noting the selector equipment and any other equipment in line. Some people draw the wires within a sketch of their boat to indicate where they are. In a complex boat, this may ultimately be more confusing than drawing them in abstract and using industry conventions to show electrical components (see Online Extra). Start simply and make sure you know what you're drawing. Use a sharp pencil and try to avoid erasures. As you gain understanding and confidence, you'll likely redraw it several times. Indicate wire colors and gauges (thickness). The lower the gauge, the thicker the wire and the more current it can carry. The gauge should be imprinted on the insulation, with the number followed by "AWG," such as "12 AWG."

Using the list you made for the DC side, match up the breakers on the panel to the DC users. A few stragglers aside, the diagram of your DC system should come into focus. But don't jump ahead and make assumptions. All too often, a circuit breaker will have been reassigned in some past renovation, or a previous owner will have spliced into a wire to obtain power for an added item such as a fan. The only way to figure that out is to trace each wire to see where it really goes.

After getting a basic understanding of your DC system, it's time to get down and dirty. First turn off all sources of power. Unplug from shore power, turn off any inverter and disconnect it from the battery, disable the generator, and remove the positive DC wires from the batteries. Although you're working on DC circuits, these actions will disable the AC side in case you mix up the two. Even after you've done this, DO NOT assume it's safe to touch any exposed wires, terminals, bus, etc.

Start at the source and trace each wire through to its end. The primary source wires will be heavy-duty wires running from your batteries to a distribution panel, or on smaller boats, a busbar. These wires should be few and simple, and much heavier gauge than the ones coming out of the panel/busbar because they supply the current for all those smaller wires. They may run through a selector switch before the panel.

The busbars or circuit breaker panels are the secondary source for most of your wiring, where the current "spreads out" following myriads of smaller wires to all the users on the boat. Hopefully your panel will have labels at the breakers, giving you some idea where these wires go. You may have to cut wire ties to isolate a particular wire contained in a tight bundle. Remember to re-tie the bundles when you're through. The wire you're tracing will often lead into a hole or conduit, but its color should distinguish it at the other end. If not, position a helper where you think the wire exits. Pull or carefully tug on your end, and hopefully your helper can see it moving. If not, try pulling back and forth like a seesaw.

If you just can't trace a wire, use a volt-ohm meter (VOM) to check for continuity (see "Five Ways To Use A Digital Multimeter," Dec. 2013). If you get continuity, you know in theory that the wire coming out of the hole is the same one going in. In some cases, wires going to certain equipment can indicate "ghost continuity" because of ground connections or other features. Physically tracing the wire is the most accurate method, especially on older boats. Once you've identified a wire from its source to its use, you can label it and add it to your wiring diagram.

Attach labels to the wires at each end and at appropriate spots along the wire run. This helps when troubleshooting later. Buy labels or use high-quality yellow or white electrical tape and write on it with a quality indelible marker. Oil, grease, and other fumes in the boating atmosphere can cause the glue on labels or even good electrical tape to dissolve.

It's usually best to wrap the tape entirely around the wire, sticking it to itself. Office supply labels for label printers look neat but I've found that the glue on the back seldom lasts long and the labels end up in the bilge. Also label the wires and components on your diagram. You'll probably have to list and number these labels off to the side with a corresponding encircled number at the component. This avoids diagram clutter.

As you trace wires, look carefully for problems, including chafed insulation, hot spots indicated by browned or blackened insulation, little bumps in the insulation (indicates corrosion or overheating inside), a burnt insulation smell, or corroded terminals. Note the problems and fix them before you use the boat again. If you find an unfamiliar component, such as a diode, shunt, or transfer-solenoid switch, ask someone or research the part until you know what it does. This isn't just for accuracy; it will educate you, enabling you to diagnose problems more easily.

In older boats you might find dead wires, where an owner has removed something and disconnected (hopefully) its supply wire at the panel, but left it behind "just in case." Should you take it out, leave a strong nylon messenger string in its place to pull through another wire later. If you leave the wire, label it at both ends and be certain it's dead. Seal each end by wrapping it with electrical tape and then smear electrician's "liquid tape" over the actual tape to keep moisture out and the tape in place.

By the time you get through diagramming the DC system, you'll have a good sense of how you want your wiring diagram to look. This is a good time to redraw it before starting on the AC system. AC systems can have more than one source (shore power, generator, inverter). If yours is particularly complex, consider hiring an ABYC-certified tech for an hour or two to walk you through it. Your diagram should clearly differentiate between AC and DC, or you can do a separate diagram for each system. Label which is which and make it obvious where the two types of current run close to, or could be confused with, each other. Make at least one copy to keep off the boat, and store your onboard diagram in a waterproof container such as a Ziploc bag. If it's very large, roll it up in a PVC pipe with two end caps. Glue one on, and use the other as a removable cap.

Diagramming your electrical system is a great winter project, and will be invaluable when you want to install something new.

Example Of A Draft Wiring Diagram For A Simple Boat

One of the top technical experts in the marine industry, Tom Neale, BoatUS Magazine Technical Editor, has won nine first-place awards from Boating Writers International, and is author of the magazine’s popular "Ask The Experts" column. His depth of technical knowledge comes from living aboard various boats with his family for more than 30 years, cruising far and wide, and essentially learning how to install, fix, and rebuild every system onboard himself. A lawyer by training, for most of his career Tom has been an editor and columnist at national magazines such as Cruising World, PassageMaker, and Soundings. He wrote the acclaimed memoir All In The Same Boat (McGraw Hill), as well as Chesapeake Bay Cruising Guide, Vol. 1. These days, Tom and his wife Mel enjoy cruising their 2006 Camano 41 Chez Nous with their grandchildren.