Boating Skills At Their Best

Our man joins the U.S.Coast Guard National Motor Lifeboat School for a little taste of what it takes to become a "surf soldier". 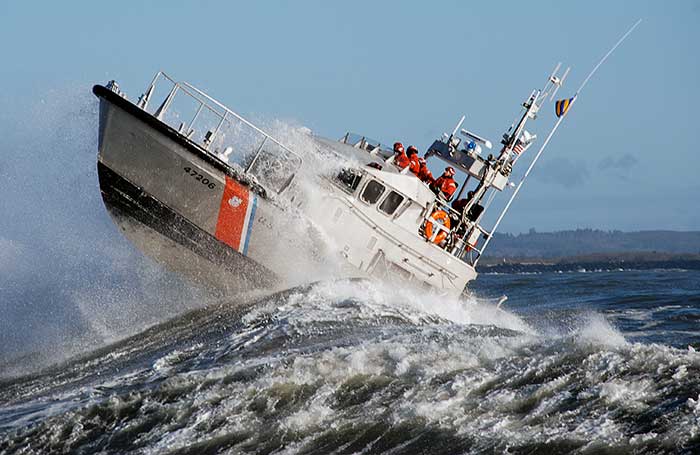 "Mere description can give but little idea of the terrors of the bar of the Columbia; one of the most fearful sights that can possibly meet the eye of the sailor." So stated Commander Charles Wilkes of the United States Navy in 1860. Those same terrors are the reason the U.S. Coast Guard established its National Motor Lifeboat School at the "Graveyard of the Pacific."

Since 1792, the mouth of the Columbia River, acknowledged by mariners as one of the most dangerous river-bar crossings in the world, has claimed some 2,000 vessels and more than 700 lives. Here, at Cape Disappointment, Washington, wind-driven waves, with all the fetch of the Pacific Ocean powering them forward, rise to enormous heights as they collide with the current of a river that drains a chunk of North America the size of France. 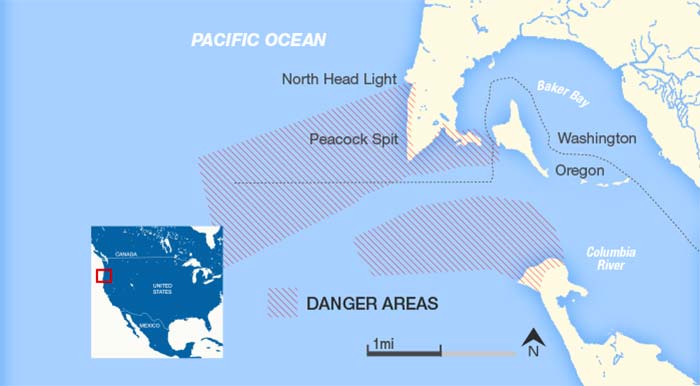 Add shallow, shifting sandbars that stretch as far as six miles seaward, a longshore current that cranks up to three knots, plus a tidal range as great as 12 feet, and you have the real-world classroom where Coast Guard small-boat coxswains from across the country come to learn how to drive a boat through hell, in an effort to earn their elite Surfman rating, the pinnacle of small-craft seamanship education.

And here I am, on that Columbia bar at the end of January, strapped into the portside helm chair on the open bridge of one of the school's 47-foot self-righting motor lifeboats, a front-row seat in seeing what goes into turning a small-boat coxswain into a Surfman. We're squared up with three other 47-footers just inside the north jetty, in the deep channel at the river mouth off Cape Disappointment Lighthouse. The instructors, two per boat, as well as the four students on each boat, are pausing here to "put eyeballs on" wind, current, and especially the sea conditions around us. Winds are WNW 25 knots, gusting to 35. There's horizontal rain with breaking seas rolling out of a horizon the hull color of these aluminum "surf warrior" training boats. For the 12 students, each a qualified coxswain with "Heavy Weather" rating and assigned to one of the Coast Guard's 20 designated Surf Stations around the country, these conditions are business as usual. 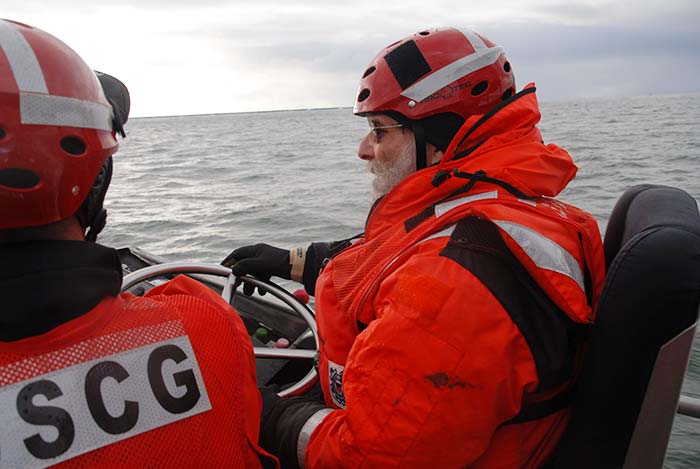 I'm swaddled in a Mustang 700 survival "onesie" festooned with countless zippers, neoprene gaskets, and Velcro cinching. The two belts on my safety harness are clipped into D-rings on either side of my seat. We're at about the halfway point in a four-week course that's been scheduled to coincide with the worst of the Pacific Northwest's storm season, and I'm really appreciating the expedition-grade polypropylene two-piece base layer next to my skin, and the neoprene wetsuit-style hood pulled over my head and tucked into the suit's neck gasket. A life jacket plus a winter watch cap, topped with a white water crash helmet and UV goggles, complete my look.

A couple of hundred yards to the north, and for a mile-and-a-half beyond, waves build, crest, and topple over with staggering force. "One cubic yard of seawater weighs almost one ton," a class handbook warns. "Never allow the boat to be caught below a breaking wave. Allow it to break before it reaches you or get to the top before it falls on you." Noted.

The United States Exploring Expedition of 1838-1842 suffered a major setback when one of its ships, the USS Peacock, "came to grief" on a sand spit on the north side of the Columbia River mouth in 1841. The Naval brig broke up, but the name stayed on. Locally "peacock" is synonymous with cross-seas and "sneaker waves," and even includes an area some National Motor Lifeboat School instructor long ago dubbed "The Coffin." 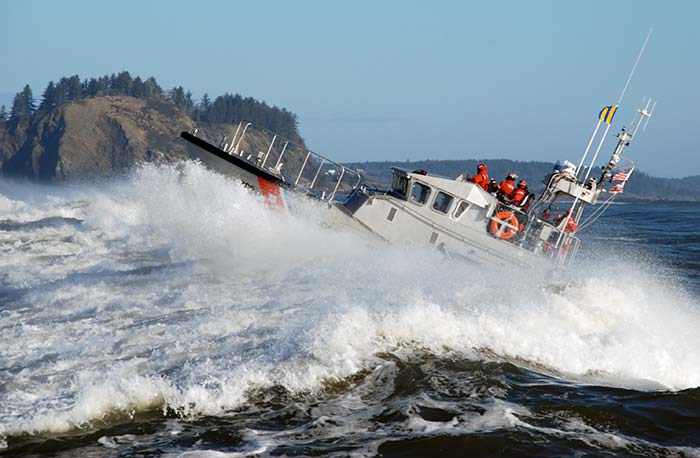 Pointing over the helm with a neoprene-gloved finger to the confused waves now standing up from several directions on Peacock Spit, Chief Boatswain's Mate Jason McCommons hollers over the wind, "That's the 'Washing Machine.'" He then begins the day's safety briefing for the four-member crew: "In the event we get knocked down or rolled over, first thing is to look for the next wave that could affect us. Next, account for the crew and look for gear in the water, lines, or antennas that could hinder our propulsion. If you find yourself in the water, ignite your orange smoke to verify your position. You," he points to me, "you don't have smoke. But we'll find you. Do NOT unclip unless directed to do so," he warns the crew. "Don't hold on to anything above shoulder height. Don't lock your knees. Make sure your footing is secure, and be mindful of handrails you could hit your teeth, face, arms, and knees on. Most of all, have fun. Ask questions if you have them." 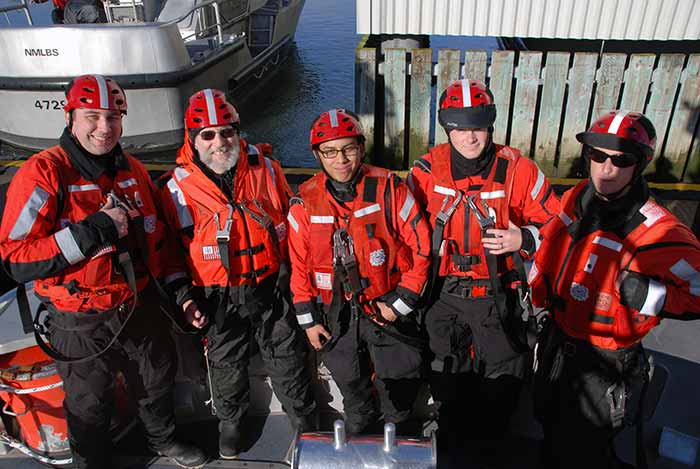 My fellow crew is Fireman Jake Lord, Boatswain's Mate Adam Saltzman, Boatswain's Mate Brian Terry, and Seaman Nicole Barger. McCommons assigns each of us to a lookout station on the flybridge. I'm port beam. We're to watch for the infamous drift logs common along this coast, as well as crab-trap buoys (it's Dungeness crab season), and call out any close-in breaking seas or trains of outsize waves — usually in sets of three — that could cross our course.

The twin 435-horse Detroit Diesels that power MLB 47213 begin to whine, and we round the jetty. His neoprene-gloved left hand on the wheel and right glove full of the twin throttles, McCommons puts the 47-footer up on plane. With a top speed of 25 knots, the MLB can outrun the waves. McCommons, who's taught here for four years, heads farther out, then turns back toward the beach to line up on North Head Lighthouse, a mile distant.

We're in the surf zone now, taking the northwesterly seas on the chin. McCommons gives a running commentary punctuated by shouted reports from the lookouts ("Breaking sea at 11 o'clock, 50 yards!"). We rise over the top through the "shoulder," the area on the crest that isn't yet breaking but soon will. The skill is to pick that low spot and get over before kinetic energy meeting shoal water overcomes the wave and it topples into chaos. Sliding down the wave's backside at lightning speed, McCommons throttles up to bring the bow around, back on course in the trough. The wave we just aced breaks safely behind us. But McCommons has eyes on the sets of waves farther out, too. He's watching — three, four, even five rows seaward — looking for rogue sets, and anticipating where seas will be breaking in relation to our speed and heading. The real skill to be learned from such seasoned instructors comes in how they work the helm and throttles to put the boat where it ought to be as the endless progression of wave trains intercept our course. Earlier he explained that if the boat should get beam-to on a breaking wave, to avoid a rollover, it's necessary to turn the bow right into the wave, using the throttles as well as the wheel, but to cut speed going up the wave face. "You don't want to launch 40,000 pounds of boat off the crest. That's how things break and people get hurt."

MLB 47213 begins lifting on the next wave as McCommons lines up the lighthouse. Up we rise like a high-speed elevator through another 30-yard shoulder where the wave hasn't yet started to break, although the crest directly ahead is tumbling. We'll be over wave and the two stacking up behind it to the west are bigger than the rest. 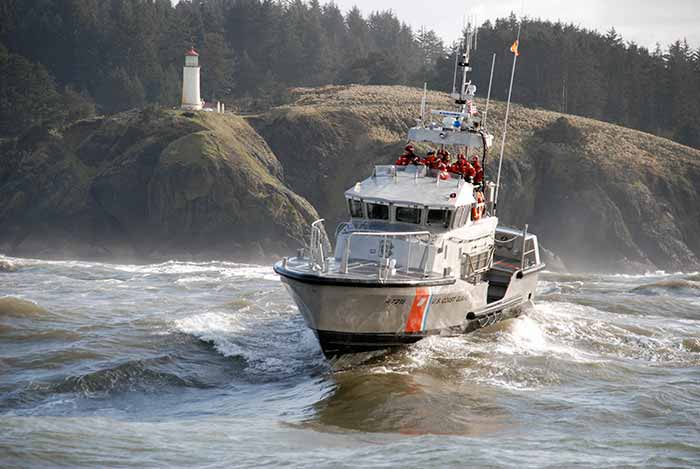 "Breaking on the bow!" shouts the lookout. Motioning with his head toward the next wave in this outsize set breaking with sobering force ahead of us, McCommons shouts: "I'm going to turn so I don't fall up underneath that. Otherwise we'd be going for a rollover."

Eight rock-and-roll minutes later, we heave-to below North Head Light where the three training boats that preceded us are waiting in deeper water, as the instructors compare notes via VHF. Then, one by one, the boats peel off for a "southbound beach lateral," a repeat performance but with the waves on the starboard quarter.

Approaching Peacock closer in this time, McCommons shouts, "See how fast the waves are standing up here? I'm going for near-side shoulder after near-side shoulder to get across each wave before it breaks." He throttles back to let a breaker pass ahead, then powers up, aiming for the slack-water shoulder on the next crest. The boat tears up a 16-foot wave, but others come from dead ahead, and ... Bam! For a keel-shuddering instant, the boat comes to an almost dead stop, a wall of gray water breaking over the bow and sluicing the bridge and crew. The twin diesels scream under McCommons' quick throttle work, and it's over before I realize what happened. We're ready for the next one, and the next, and ... 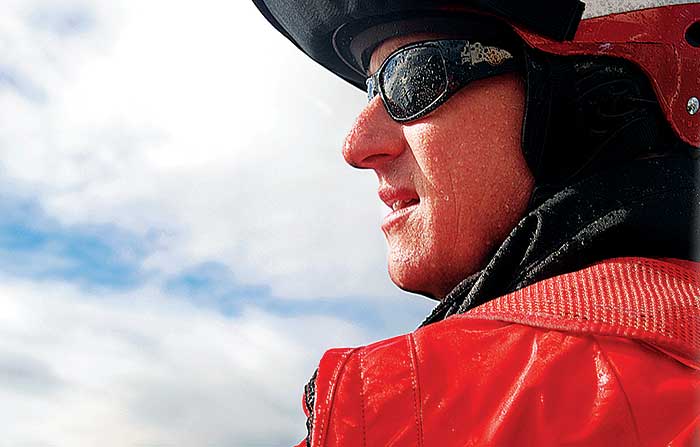 "I misread that wave a bit," McCommons says later. "It kind of smacked our bow and shoved it down, so I put the helm hard to seaward, powered up, and continued back into the seas. That's the problem here; everything comes at you from multiple directions." He looks at me. "Oh, looks like I got you pretty wet."

Yes, he did, and now, hove-to in the relative quiet of the deep channel and with my adrenaline back in the bottle, McCommons hands the helm over ... to me! I put the 47-footer through a few of its signature high-speed maneuvers, under McCommons' tutelage, keeping the hammer down for a 25-knot run past legendary Buoy 10, which I've heard about from veteran Columbia salmon anglers. I swing the helm northeast, line up on the Ilwaco Channel entrance, and imagine myself a Surfman, heading back to a job where I'm the one qualified to drive a boat like this, straight into harm's way.

The Making Of A Surf Soldier

While Coast Guard coxswains can qualify for Surfman rating at their regular duty stations, it could take three or four years to accumulate the requisite helm time in extreme sea conditions. That's why the USCG established the National Motor Lifeboat School at Cape Disappointment in 1980. Here, Coasties can earn their "surf creds" in four weeks, about 40 hours of helm time, ideally in sea conditions that the average recreational boater should pray they never experience. 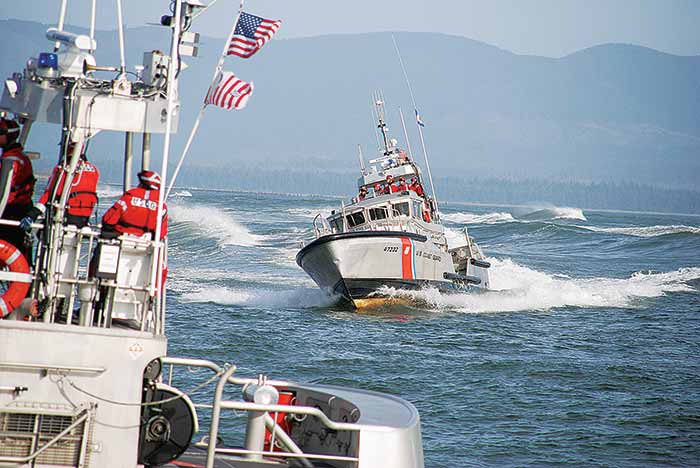 Students must have the rank of boatswain's mate, be already qualified as small-boat coxswains with Heavy Weather rating, and be assigned to one of the Coast Guard's 20 designated Surf Stations around the country (15 are on the West Coast).

While the school's Heavy Weather course includes lots of classroom time, nearly all Surfman training is done underway. Once they complete the course, each student must demonstrate his or her competency to their home commands before finally earning their own Surf Check, a brass shield dating back to the turn of the 20th century. The medal is engraved with their individual number in a long line of surfmen, attesting that they've achieved "the highest position in the boat crew," and have entered an elite team of individuals who can drive a boat with skill and courage through conditions where most mariners would fear to tread.

Ryck Lydecker is a fisherman and formerly part of our BoatUS Government Affairs team.