When there's a dispute over the fair and reasonable value of a salvage claim, the BoatUS Salvage Arbitration Program can be a fast, low-cost way to resolve disagreements. 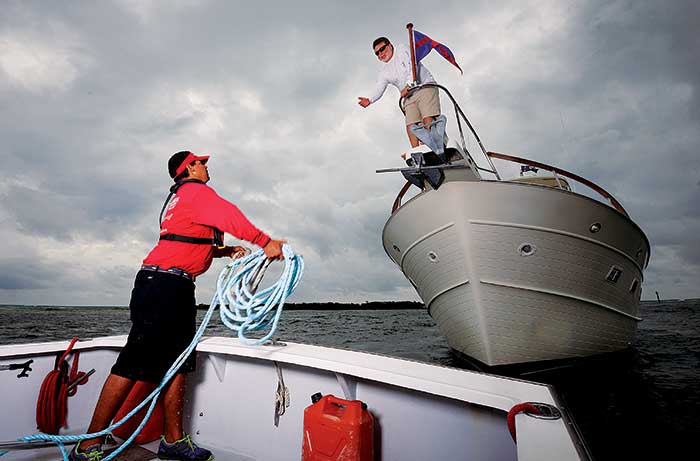 Getting rescued when your boat is in peril can be stressful. If there's a billing dispute later, our Salvage Arbitration Plan can help. (Photo: Jason Arnold)

On a windy spring day, a 36-foot powerboat grounded on a North Carolina sandbar and the owner called a commercial tower (not affiliated with BoatUS) on his cell phone requesting assistance. The tower explained that the charges to unground the boat, using a single towing vessel, based on the location and conditions as related to him over the phone by the owner, would be $20 per foot x 36 feet, plus $250 per hour. The boat owner agreed, and the towing company was on scene and the contract signed 45 minutes later. What happened next is in dispute. The tower claimed he explained that the actual weather and grounding conditions when he got there made it impossible to complete the job with just one of his boats. Therefore, the boat was considered "hard" aground; the service necessary to complete the ungrounding would be considered salvage; and a much higher rate would apply. The boat owner claimed that was never mentioned. The tower eventually freed the boat using two vessels. The tower said he would submit the bill to the owner's insurance company (not BoatUS) for payment. Later, the boat owner was shocked to see a salvage bill for $14,500 — over 15 times what he thought he should have to pay. Included was a note saying the boat owner's "Liability Only" boat-insurance policy didn't cover salvage service. The owner learned about the BoatUS Salvage Arbitration Plan from an attorney and called us to find out more.

If you're uninsured, or out of cell-phone range, you can safeguard yourself by keeping a copy of the BoatUS Open Form Salvage Agreement aboard and present it to a salvor in lieu of their contract.

As in any dispute, there are at least two sides to the story. On one side are the towing or salvage company views of the risk and potential for the situation to go from bad to worse. He/she has invested a lot of money in equipment, exposes him/herself and vessels to danger, and uses expertise to rescue stranded boats in many levels of peril. It's a business, and for hundreds of years salvors, who often risk life and limb, have been amply rewarded to encourage prompt aid to boats in danger. On the other side is the boat owner and/or their insurance company, perceiving the value of the service as far less because the time it took to complete the job was short, or there's a disagreement over the level of risk, peril, and effort involved in rescuing the boat.

Of the nearly 70,000 BoatUS Members who find themselves in need of basic towing and soft ungrounding each year, the vast majority are sent on their way at no charge because they've opted to carry unlimited towing as part of their BoatUS Membership. Salvage is not covered by the BoatUS unlimited towing program, but fortunately incidents involving salvage and hard groundings are only three percent of the annual cases. A good marine insurance policy should provide you with full salvage coverage for those times when more than a tow is needed. Boaters who are not insured, or have inadequate coverage, may someday find themselves in need of salvage and faced with a large salvage bill. If your boat is insured, find out how your policy pays for salvage before you need it. The best insurance policies, such as those offered through the BoatUS Marine Insurance Program, provide for salvage up to the agreed value of the boat, not just a percentage of its value. 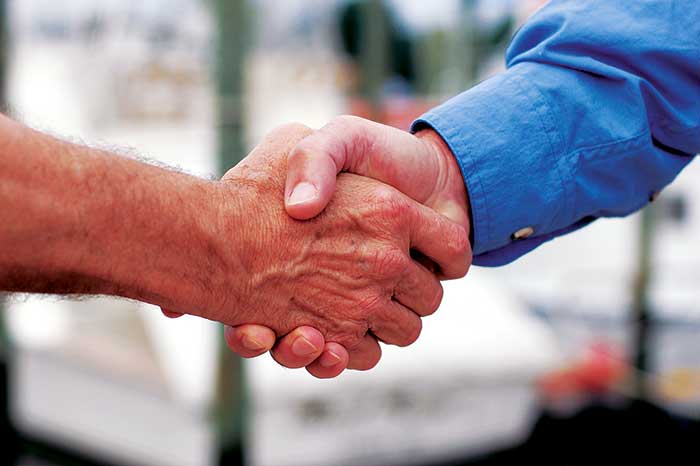 When there's a dispute over what the fair and reasonable value of the salvage claim is, it's normally settled through negotiations between the towing company and the boat owner's insurance company. But if there's no insurance, or if negotiations break down, the BoatUS Salvage Arbitration Plan can help resolve disputes objectively, quickly, and inexpensively by putting the decision-making in the hands of knowledgeable marine professionals who review the facts and reach a settlement based on admiralty law.

In 1804, U.S. Supreme Court Chief Justice John Marshall declared, "If property is exposed to peril or hazard at sea and is saved by the voluntary exertion of any persons whatsoever, ... a very ample award will be bestowed in the courts of justice." This is the basic principle that still guides salvage law today. These laws are designed to encourage seamen to render prompt aid to vessels and property in peril at sea. For more than 200 years, courts have made awards based on several factors. The BoatUS Salvage Arbitration Plan has been using the same criteria and resolving disagreements since 1989. Originally designed to assist in the settlement of disputes between salvors and insurance companies, it's also available to any boat owners, and is designed to avoid costly and drawn-out litigation in court. BoatUS plays absolutely no role in the decision-making process; our function is administrative, facilitating communications and keeping the parties on a timely track toward a resolution. Modeled after other arbitration plans, it's an expedited and inexpensive way to resolve salvage claim disputes. 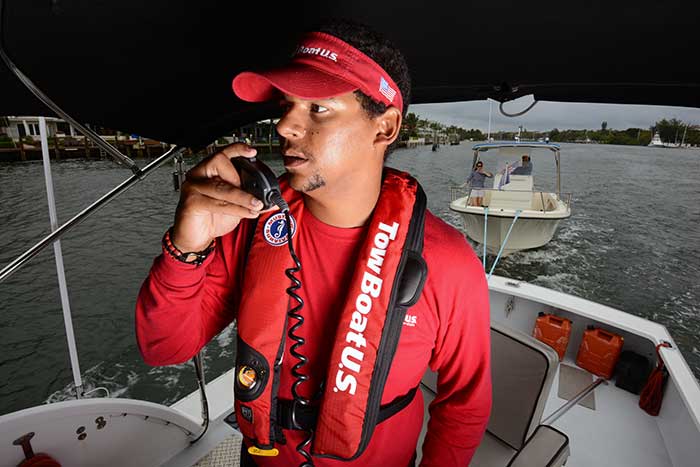 TowBoatUS towers have agreed to notify boaters, when possible, if a tow might be considered salvage. (Photo: Jason Arnold)

Each party selects an arbitrator from a list of admiralty attorneys and marine professionals (salvors, marine surveyors, etc,) who are experienced in salvage matters. The two arbitrators then select a third, who is always an experienced admiralty attorney, and the three-person panel reviews all facts as presented by the two parties. There are no direct communications between the parties and the arbitration panel; all communication is in writing and there is no in-person testimony. Each side is given the opportunity to rebut information given by the other. The Plan saves both parties money, often a lot of money. Rather than pay hourly attorney rates and court costs, which can quickly add up to tens of thousands of dollars, per-party fees for the arbitration service are capped at $3,400, of which $350 goes to BoatUS strictly for administering the program and the rest goes to the arbitrators. And unlike Admiralty Court proceedings, which can drag on for years, settlement awards are decided no more than 12 weeks after the panel is convened. Because both parties have already agreed that the panel's decisions are binding, there is no lengthy appeal process to prolong the proceedings.

In the case above, the towing company agreed to arbitration. A Salvage Arbitration panel convened, carefully analyzed the facts of the case, and decided that while the service was considered salvage, it involved relatively low risk to the salvor and lower peril to the vessel. The panel, applying admiralty law standards used in hundreds of other decisions, agreed to give the towing company a salvage award of $3,800. Even with the arbitration fees split evenly between the parties, both sides saved a significant amount of money and time over taking the case to court.

Stress is often high when your boat is in danger, and the last thing you may be thinking about is how much it will cost to save it. Before you enter into any salvage contract, we recommend that you call your insurance company, if you are able, and have your claims adjuster on the phone to negotiate the claim with the salvor. If you're uninsured, or out of cell-phone range, you can safeguard yourself by keeping a copy of the BoatUS Open Form Salvage Agreement aboard and present it to a salvor in lieu of their contract. This form allows negotiating the price after the salvage, when things can be calmly discussed. The form provides three different checkboxes for salvage billing options.

If you're insured with BoatUS, call the Claims hotline, if you can safely do so, and speak to a knowledgeable representative who can guide you and work directly with the salvor. If you're not able to speak to anyone, and not sure which one to use, check the first box: No Cure/No Pay.

Because the form provides for arbitration if an agreement can't be reached, towing and salvage companies should be willing to use it. Salvage can happen without a contract and you don't have to sign any salvor's contract, but using the BoatUS Agreement can save a lot of hassle later. No one wants to find themselves with a dispute over salvage, but knowing the BoatUS Salvage Arbitration Plan is an option can take the stress out of a very stressful time.