How to Winterize Boat Engines and Drives

No matter what kind of engine you have, there are three essential winterizing steps. 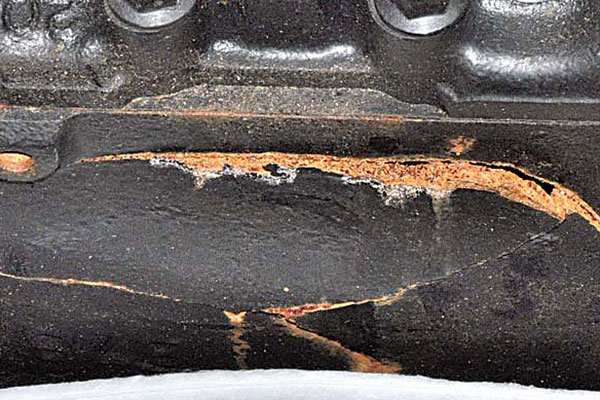 Water expands when it freezes and not properly winterizing your engine can lead to a cracked block, necessitating engine replacement.

Change the Oil and Oil Filter

Residual acids and moisture left in the crankcase over the winter can pit bearings and other vital engine parts, so it is important to change the oil just before laying up the boat. For best results, run the engine for a few minutes to lower the oil's viscosity and allow it to pick up impurities. Shut off the engine, change the oil, and replace the filter. Restart the engine and run for about a minute to circulate the fresh oil to internal parts. While it's running, check to make sure the oil filter isn't leaking.

Change the Fuel Filter and Stabilize the Fuel

Replace the fuel filter and/or change the fuel filter canisters. Like the oil filter, the fuel filter should be checked for leaks while the engine is still running. If your boat runs on gasoline and your gasoline has ethanol in it (E10), the ethanol will absorb moisture over the winter. If it absorbs enough water, the ethanol can separate from the gasoline, creating a caustic mixture at the bottom of your tank that can damage the engine. This process, called phase separation, can only be completely prevented by emptying the tank. If that isn't practical, add stabilizer to keep the gas from oxidizing over the winter, then fill the tank to 95-percent full to allow for expansion. A tank that's almost full has less "lung capacity" to breathe in moist air, so the ethanol is less likely to be able to absorb enough moisture to separate.

Drain the Water from the Engine or Use Antifreeze

This is the part that seems most often to confuse owners. Mistakes in this step lead to the vast majority of the freeze claims in the BoatUS Marine Insurance files. Exactly how this is done varies from one type of engine to another, as described in the following pages.

Most boat engines use water drawn from outside the boat to cool the engine. In raw-water-cooled engines, seawater is pumped directly through the engine block casting, head assembly and exhaust manifold, and then returned overboard with the unwanted heat. In freshwater-cooled engines, there are actually two systems — a raw-water side that cools the coolant/water mixture (freshwater) in a closed-loop system, which in turn cools the engine.

Winterizing the freshwater side simply involves making sure its year-round permanent coolant is an adequate mixture to meet the manufacturer's recommendations for your locality, typically a 50/50 mix with water. The coolant you use in the freshwater system is not the same as what you will use on the raw-water side of the engine (see sidebar) — ethylene glycol is effective but highly toxic. With the engine at room temperature, slowly remove the cap on the expansion tank and check the mixture with an antifreeze hydrometer. If the coolant is rusty or dirty, it needs to be drained and replaced with a fresh mixture. (Resist the temptation to use more than 50 percent coolant. An overly rich mixture will congeal, with 100 percent coolant turning to a solid gel at -8 degrees F.) 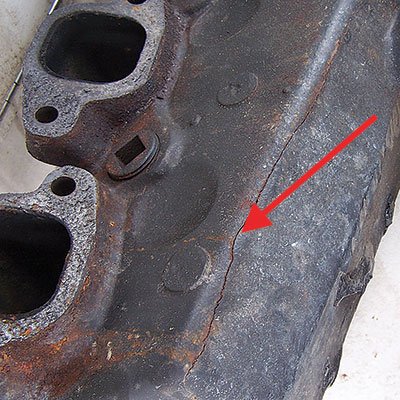 Even a short freeze can cause expanding ice to crack a manifold.

Draining an engine must be thorough as small pockets of water can crack expensive parts. To drain, check the engine manual for the location of all petcocks and open them. If water fails to drain freely from a petcock, it could be clogged with rust or debris. Remove the petcock and free the opening with a tool or coat hanger. Don't forget also to drain the sea strainer, seacock body, and water lift muffler if installed.

On some boats, it can be very difficult to reach the intake hose for the engine or to get it off the seacock. A variety of products have been designed to make getting antifreeze into the engine possible without removing that hose, such as three-way valves that attach to the seacock or the sea strainer, funnels that fit inside the sea strainer, and reservoirs with hoses that can be run to the raw-water intake. Google "boat winterizing products" and you'll find a selection. If you choose to use one of these, just be certain that the antifreeze reaches everything downstream of where you are adding it, not just upstream. 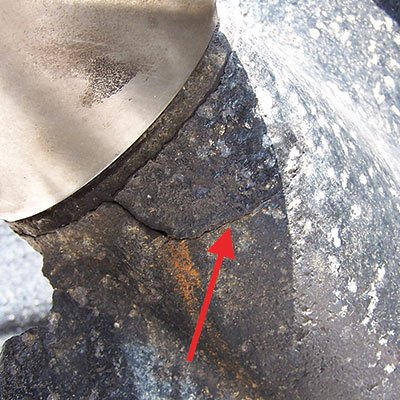 Store outdrives and outboards in the down position so water can drain; otherwise ice can crack the housing.

In addition to the bucket and the antifreeze, for gasoline engines you'll also need a can of engine fogging fluid or light motor oil, and some plastic sheeting and duct tape.

If a fuel valve is installed, turn it off once antifreeze is coming out of the exhaust and run the carburetor dry. For the last 10 seconds or so of engine operation, spray the fogging fluid into the flame arrester on the carburetor. Light oil can be trickled down the carburetor if fogging fluid is not available. This may stall the engine, which is OK. Finally, wrap duct tape around the flame arrester and cover the top of the engine with plastic after it has cooled. This helps prevent corrosion from forming on internal engine parts. Attach a tag somewhere as a reminder about the duct tape, which will prevent the engine from starting next spring. 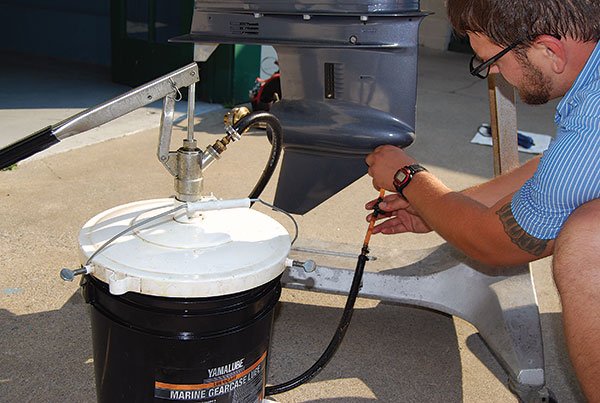 Changing the lower unit oil will help protect your boat from worn out lube over the winter. (Photo: John Tiger)

Other models may require the use of "muffs" to first flush and then run antifreeze through the drive. For those drives, warm up the engine with the muffs, then use a five-gallon bucket of antifreeze plumbed to the muffs and run the engine until it's all been run through. Afterward, all outdrives should be stored in the down position to prevent water from entering the exhaust hub of the propeller. In cold weather, any accumulated water in the outdrive can freeze and ice may expand and crack the housing.

While not technically necessary for winterizing, it makes sense to drain and fill the outdrive oil now. It's not very difficult and will protect your outdrive from the effects of worn-out oil over the winter while letting you hit the water faster in the spring.

Lower the outdrive as far as possible and drain the oil by removing the lube drain/fill screw at the bottom and the vent plug screw at the top. Keep in mind that refilling your outdrive oil is counterintuitive; new oil must be pumped UP into the outdrive; never refill from the top port or vent hole. Pump fresh oil into the drive from the drain hole at the bottom until fluid appears out the vent hole at the top. Install the vent screw, which slows the lube from coming back out the drain, and then replace the drain/ fill screw quickly. It's a good idea to put new gaskets on the plugs. If your boat has a reservoir in the engine compartment, fill it also.

Outdrives are expensive and have become a frequent target for thieves. Even if the boat is kept in your driveway, consider taking the outdrive off and storing it in your garage or basement for the winter.

Consult your engine's owner's manual or service manual before you begin. Today's engines (especially four-stroke and direct-injected two-stroke outboards) may have special winterizing, flushing, and maintenance instructions, so follow them closely. For example, Evinrude's E-Tec outboards feature a self-winterizing mode in the engine's electronic programming. Its simple to do by following the instructions in the winterizing section of the owner's manual, yet if you don't know about it, you might be tempted to try it the traditional way. If your engine is still under warranty, and you don't winterize it according to the manufacturer's instructions, you could easily void the warranty coverage.

While winterizing procedures vary somewhat for older engines versus newer ones, and for two-stroke versus four-stroke outboards, the basics are the same.

Store the engine in the running (tilted down) position; otherwise water that gets in through the hub can freeze and crack the lower unit housing. If possible, take smaller outboards home for safekeeping.

Personal watercraft (PWC) and other boats with jet drives need to be winterized, too. Because there are so many different types, consult your owner's manual for instructions specific to your boat. As with other engines, change the oil, oil filter, and fuel filter and stabilize the gasoline. In most cases, removing water from the engines and drives of PWCs simply involves starting them out of the water and moving the steering lock-to-lock a few times for about 30 seconds — any longer can overheat the engine. Run the engine like this two or three times. If you fill up your gas tank and add stabilizer first, the treated gas will circulate in the engine while you're getting the water out. Larger jet drives may need to be winterized by a qualified shop.

BoatUS receives complaints every year from boat owners who thought the marina would winterize their boat but the marina didn't do it or didn't know they were supposed to. Disputes arise when the marina and the boat owner don't have a well-defined contract that spells out exactly what's to be done.

The term "winterizing" doesn't have a universal meaning and your definition of winterizing and theirs may be completely different. Telling someone to winterize the engines and freshwater system doesn't mean they'll also close the seacocks and winterize the head.

Insist on a written contract that clearly lists every job necessary to protect your boat and has a firm time frame, beginning well before the first typical hard freeze. Include language that specifies not to de-winterize until you authorize it in case something comes up and you won't be using the boat through the next winter. Pay with a credit card if possible. If the boat didn't get winterized properly per the contract and you have damage, you can dispute the charges with your credit card company, which gives you more leverage. Also, don't assume that the marina will routinely inspect your docklines and bilge unless you specifically pay for the service. If your marina won't be checking on your boat over the winter, you'll need to do it yourself or make arrangements with your dockmates.

On all too many of our freeze claims the owner says, "But I thought the yard was going to take care of that!" Whatever you expect to be done, spell it out in writing.