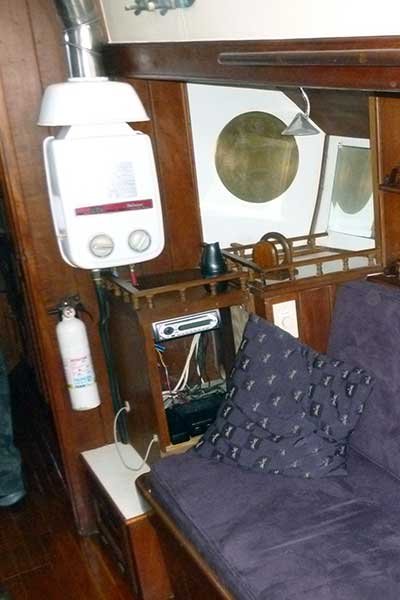 Several marine surveyors have recently told Seaworthy that they've come across boats with LPG (propane) on-demand, tankless water heaters installed. While these water heaters are fine in a house, they're not safe installed in a boat, and installing one is almost certainly contrary to American Boat and Yacht Council (ABYC) standards.

Here's why: Any LPG appliance produces deadly carbon monoxide (CO), including, say, an LPG stove. What makes LPG tankless water heaters dangerous is that they're designed to turn on automatically. Stoves, on the other hand, are attended, require frequent attention by the operator, and can't turn themselves on while someone aboard may be sleeping or unaware. ABYC standards require that any unattended LPG appliance must have a combustion-sealed chamber that draws in air from the outside, not the cabin, and also exhausts the combustion products outside. LPG tankless heaters don't have a room-sealed combustion chamber, which means when they are on, a leak or even a strong downdraft could cause carbon monoxide to collect in the boat. Most often, surveyors say, these appliances are mounted in the head, which has precious little air — it doesn't take much CO in a small space to build up to dangerous levels. Leaking CO into the head from tankless LPG water heaters has already caused several close calls. Don't take the risk — install only a marine-rated, tank-type water heater in your boat. 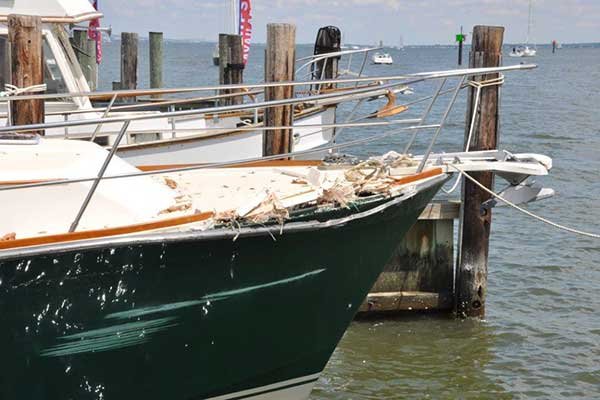 Seaworthy would never recommend using an autopilot when passing under a bridge due to the potential for boat, ship, and barge traffic, and to the likelihood of changes in wind and current near such a large obstruction. But if that won't convince you, maybe this will. Operating under autopilot while passing under the Route 50 bridge on the Severn River near Annapolis last spring, a Sabreline 36 suddenly turned hard to starboard and drove right into the bridge abutment. The boat was traveling south at about 7 knots with 10 knots of northerly breeze, and she was about 70 feet from the bridge abutment when she turned. The incident happened so quickly that her captain had no time to react. Similar cases have been reported elsewhere when captains relied on autopilots to pass under bridges. The metal in the bridge structure can easily disturb the magnetic fields that the fluxgate compass uses to determine the boat's heading and keep it on course. When navigating under bridges or in the vicinity of natural magnetic anomalies, usually noted on charts, do not rely on the autopilot. Hand steer until you are well beyond any potential disturbances. 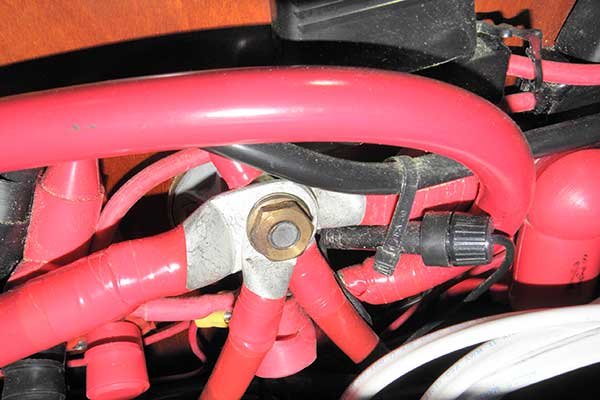 What's wrong with the picture at the right? At first glance, the ground wires on the back of this ground stud look OK — properly crimped and securely fitted. Sharp-eyed readers, though, will see red — as in the red wire that's arcing over a big black ground wire. That red wire is a positive, current-carrying wire. If it chafes through (which it probably will over time, even with a bit of chafeguard on it), it's going to contact the ground wire. In the blink of an eye, the wires will get red hot, easily hot enough to start a fire. Even if it doesn't start a fire, it's possible that everything connected to the ground lug is going to get a burst of electricity the wrong way that could easily destroy sensitive electronics. An additional problem is the number of wires that are connected to the ground lug. American Boat and Yacht Council (ABYC) standards call for a maximum of four wires per lug — this one has five, the last one likely added by a well-meaning but uninformed do-it-yourselfer. 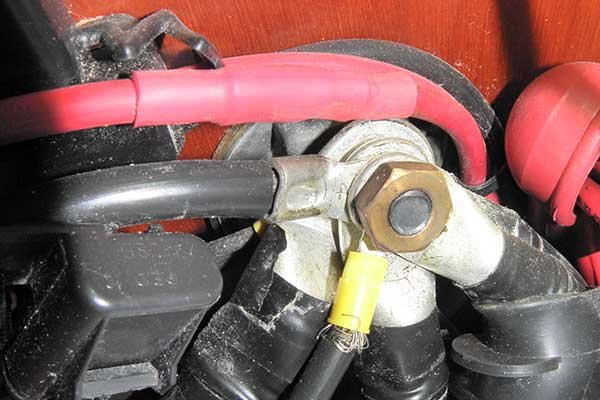 If you've read this far, you'll be able to spot the problems on the picture at the right. While it pretty much has the same problems — too many wires on the lug and, in this case, a ground wire ready to chafe its insulation against a positive wire — note that the lone black ground wire is actually zip-tied to the positive wire, which will likely accelerate chafe. In this case, if the two wires chafed through, there would be a direct short from two 8D batteries — with enough resulting heat to ignite anything nearby. Positive and negative wires have to be separated so they don't have any chance of contacting each other if they chafe through. If you're not positive about how to work on your electrical system, hire a pro. 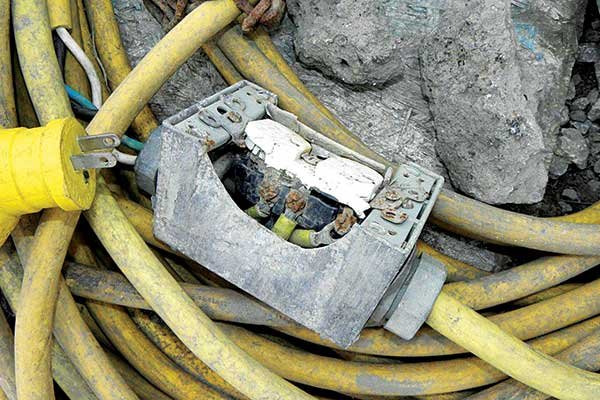 OK, if it was a bit tricky to spot the problems on the last one, this one ought to be pretty easy. The photo at the right was sent to us by marine surveyor Greg Group and shows a boatyard outlet. Most people would be smart enough to leave this alone, but the surveyor says it was still available to anyone to plug into. Not only is the outlet broken and the connections corroded, the metal box was actually shorted to the wires, making an electrocution all too easy. One more thing is the extension cord in the left side of the photo; it's missing its ground plug, which, ironically, is designed to prevent a dangerous shock in case the outlet is faulty.

While you can't know if every outlet in the boatyard is safe, you can protect yourself by using an extension cord with a built-in ground fault interrupter (GFI). That way, if there is a problem with the outlet, the GFI will trip before you can get hurt. And if you see an outlet like this lying around your boatyard, treat it as you would a poisonous snake — stay away and tell your boatyard manager about it.

Repowering or Upgrading Your Boat?

Let your insurance company know. Most BoatUS Marine Insurance polices are of the agreed value kind — that is, you and the insurance company agree on a value for the boat, motor, and equipment. This is the amount that would be paid to you if the boat were stolen or destroyed. If you buy a brand-new engine or make substantial upgrades to your boat, the value will likely increase. But if you don't tell your insurance company and raise the agreed value, the old value is what could be used if your boat is lost, which may be thousands less than what you invested. If you need to report a repower or upgrade, call a BoatUS underwriter (1-800-804-2628). If you're asked to send in documentation to substantiate the work, don't put it off.