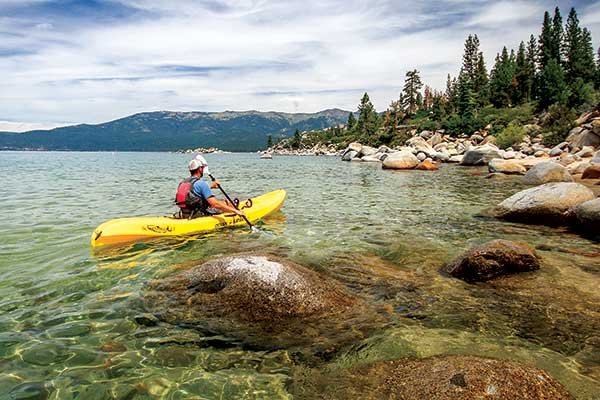 The sapphire-blue and emerald-green waters of Lake Tahoe stand in stark contrast to the snow on the peaks that surround the lake, the same snow that feeds what is the sixth largest freshwater lake by volume in the country. 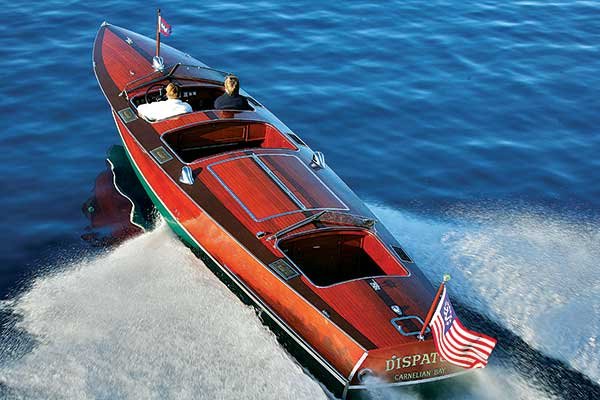 "The first thing that struck me was just how clear the water is," said Susan Shingledecker, who spent time cruising and paddleboarding on the lake last August. "Looking down, I could easily see a pair of sunglasses dropped by a fellow paddler. I thought I could reach them. But in reality, they were so deep that I'd have needed fins and a snorkel to retrieve them!" Located more than 6,000 feet above sea level, Lake Tahoe, with an average depth of 1,000 feet, is bisected from north to south by the California/Nevada state line. Approximately two-thirds of the lake is in California. The line travels from Crystal Bay, in the north, to the aptly named Stateline, in the south. Fishermen need to be keenly aware of the state line, as each state requires a different license. Casting a line in the wrong spot could earn you a ticket. Fishing is allowed year-round on the lake, with rainbow trout, brown trout, and Kokanee salmon in abundance.

Don't forget your BoatUS Membership gives you savings at more than 1,000 marine businesses nationwide, including discounts on this and other lakes! Visit our Member Service and Discount Locator or pull up your free BoatUS App to search for local discounts. 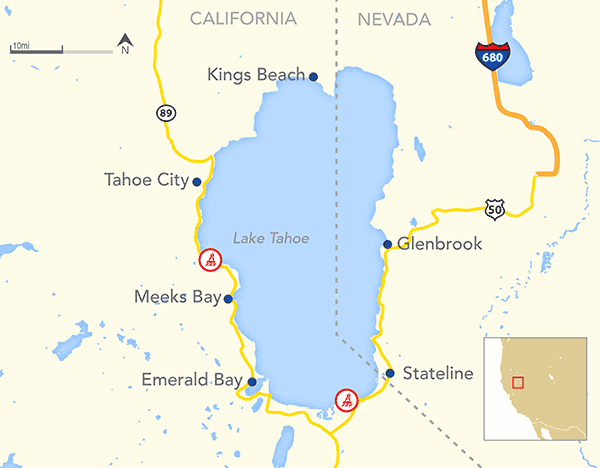 Thanks to the lake's elevation, it never gets oppressively hot in summer; the average temperature in July and August is 77 F. Summer and early fall is best for boating. By October, it gets cold, especially at night. January and February average a chilly 38 F.

Marinas are situated all around the lake. Moorings can also be rented at some of the resorts. Plentiful campsites, hotels, and resorts rim the lake. www.visitinglaketahoe.com

There's 17 listed launch ramps at the lake, but some of these may be out of use to all but the smallest boats when water levels are low. www.visitinglaketahoe.com

There are fees for using Lake Tahoe; the most important of these is an inspection (mandatory before the boat is launched into the lake) to prevent the spread of such invasive species as zebra mussels. Fees vary depending on boat size, and these are independent of any launch fee that you may be charged at any launch-ramp facility. tahoeboatinspections.com


Interestingly, due to water depth and other environmental factors, the lake never freezes, so year-round boating is possible — for the brave. Surrounded by mountains, the area offers lots of hiking and biking trails. All kinds of watercraft are found on the lake, and with the large open areas, there's plenty of wind for sailors. If you decide not to take your own boat, rental choices abound, from PWCs and pontoon boats to ski boats, canoes, and kayaks, all available by the hour or day. Campsites and launch facilities surround the lake; just be aware that many of these may be closed to all but the smallest craft if lake levels are low. It pays to check first.