Conscientious parents, who would never imagine letting their children go boating without a life vest or ride in a car without securing their seat belts, often have no qualms about letting a child jump off a dock into fresh water. What these parents don't realize is that if the dock has 120-volt AC power, lethal amounts of electricity could be finding their way into the water from faulty wiring on the dock or a boat. In a one-week period this past July, four children and one young adult were killed in separate electric shock drowning (ESD) incidents at docks on freshwater lakes.

At a marina on Cherokee Lake in Tennessee, a 10-year-old boy died instantly and his 11-year-old friend was critically injured and died the following day after swimming near a docked houseboat. Frayed wiring near a metal swim ladder on the houseboat was believed to have been the cause. Five adults who tried to rescue the boys were also affected and there likely would have been more fatalities had someone on the dock not had the presence of mind to disconnect the houseboat's shore power cord.

At Dry Branch Cove on Lake of the Ozarks, a 26-year-old woman was electrocuted and died while swimming from a private dock that, according to preliminary police reports, had faulty wiring. Her two half-brothers, ages 11 and 13, felt a tingling and were saved when they swam toward a different dock.

In a separate Lake of the Ozarks incident, an 8-year-old boy and his 13-year-old sister both died while swimming from a dock that was also reported to have "improper wiring."

Eight-year-old Brayden Anderson was electrocuted
on the Fourth of July while swimming from a dock
at Lake of the Ozarks. His 13-year old sister
Alexandra was also an ESD victim.

An earlier test of 50 freshwater boats in the Portland, Oregon area by Kevin Ritz, the nation's foremost expert on ESD, found that 13 boats — 26 percent — were leaking potentially lethal doses of electricity into the water. How much electricity is lethal? AC current flow of around 100 milliamps (mA) of AC current will put the heart into fibrillation and death will likely follow within seconds. But lesser amounts of electricity, say, 15- 30 mA, will create muscle paralysis, and even the best swimmers will be drowned. Note that most local law enforcement investigators don't have the technical background to recognize an ESD accident and there is no post-mortem evidence available to coroners to ascertain whether electricity was involved in a drowning. It is highly likely that there are many "drowning" victims who were actually electrocuted.

When ESD accidents are identified, the parents and friends of the victims are almost always unaware that swimming from an energized dock is dangerous. In many past ESD cases, bystanders who dove into the water to save children have also become victims.

To protect against ESD accidents, the American Boat and Yacht Council (ABYC) adopted standards in 2010 that require an Equipment Leakage Circuit Interrupter (ELCI) be installed on new boats. However, not all boat manufacturers follow the ABYC standards, which are voluntary, and there is no requirement to retrofit ELCIs on older boats. There is also no standard that requires the installation of Ground Fault Circuit Interrupters (GFCIs) at marinas and private docks. (Note that in Europe, GFCIs have been required at marinas for almost 30 years and ESD is no longer a concern.) Until such time as freshwater boats and docks are safe — and that could be decades away — the best defense is to never swim near docks with energized 120-volt AC power. Signs should be posted warning children and parents to STAY OUT OF THE WATER! The rule has to be enforced. If someone must go into the water to retrieve something lost overboard, the electricity to the dock should be shut off. 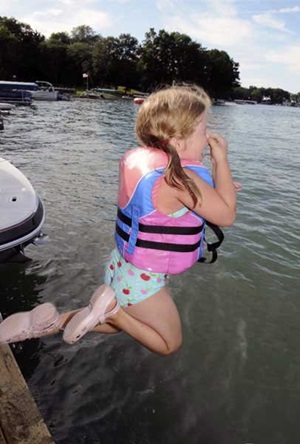 Parents who would never consider allowing their
child to go swimming without a life vest will
often have no qualms letting a child jump off an
energized dock into fresh water.

Note that 12-volt electricity will not cause ESD. Nor will 120-volt current from a boat's generator unless another boat (with an electrical fault) is sharing electricity from the generator via a power cord. In saltwater, electricity does not cause ESD; saltwater is more conductive than the human body. There is not yet enough research to know at what point brackish water becomes dangerous or what distance from a possible electrical fault is safe. When in doubt, stay out.

Note: You can test to see if a boat is leaking electrical current using something called an AC clamp meter, which clamps onto a shore power cord and measures electricity going into the boat's electrical system and returning from the system. If the two numbers aren't exactly the same, electricity is in the water. Clamp meters, GFCIs and ELCIs are available at West Marine, (www.westmarine.com). If you have questions about your dock or boat's electrical system, your best source is an ABYC-certified marine electrician.