VHF could save your life, so make sure yours is properly hooked up. 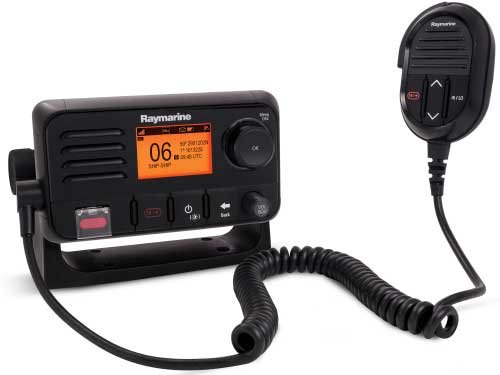 When buying electronics for your boat, the first thing on your shopping list should be a VHF radio. VHF is an acronym for Very High Frequency. A marine VHF radio lets the user communicate with other boats, marinas, and bridge tenders, but its most useful function is to summon help in the event of an emergency. The international calling and distress frequency is channel 16. The United States Coast Guard monitors this channel 24 hours a day, 7 days a week, as do commercial vessels while they are at sea, so placing a call on this channel should summon help quickly.

There are essentially two types of radio, fixed mount and handheld. A fixed mounted set is designed to be permanently installed on the vessel. Fixed sets have a maximum transmit power of 25 watts, and a lower power setting, normally 1 watt, for use when the higher power is not required. A handheld set, which looks similar to a walkie-talkie, is completely self-contained. Instead of being powered from the boat's supply, it has a built in battery that is usually rechargeable. Because of its smaller size a handheld unit has a maximum transmit power of 3 to 5 watts and its range will be more limited than a fixed mount set.

Another factor affecting range is the height of the antenna. More information on antennas see "VHF Radio Antennas".

VHF radios operate on what is often referred to as "line of sight". The radio waves travel in a straight line from the transmitting antenna, to the receiving antenna. Because of this if you are trying to call another boat that is around a corner, in a sheltered bay, with a headland in the way, you may not be able to reach them. In open water a range of 20 miles is not uncommon, and is often even greater. A sailboat that has the antenna mounted on the top of a tall mast may well be able to communicate over longer distances, simply because the antenna is higher.

Before using a radio you should familiarize yourself with the operation of the controls, so that it becomes instinctive. Although there are similarities, there can also be distinctive differences between brands and models.

No license is required to operate marine VHF in the U.S., although there are regulations governing their use, with stiff fines for making false emergency calls, or using offensive or obscene language. It should also be noted that under no circumstances should you use a radio unless you are actually onboard a boat. Although it may seem tempting to use the fixed set on the boat to communicate with members of the crew ashore carrying a portable set, this is illegal. Also, bear in mind that anything you say can be heard by anyone else within range tuned in to the same frequency.

Some higher end portable units, and all newer fixed units, are equipped with DSC (digital selective calling). DSC-equipped radios allow the user to enter a unique MMSI (Maritime Mobile Service Identity) number. Go to www.BoatUS.com/mmsi for more information. Perhaps the most important aspect of DSC-equipped radios is in an emergency situation. Pressing and holding the red emergency button on the front panel for at least 5 seconds will transmit an emergency alert signal, in addition to your position, this will sound an alarm on other DSC-equipped vessels and emergency services within range of the radio. For this feature to work the radio must be interfaced with a GPS. The radio automatically transmits the position of the vessel even if the operator is unable to speak, one of the most compelling reasons to install VHF on your boat. One impediment has been the perceived complication of making the necessary connections between the GPS and the VHF radio, but this has been made simpler in recent years with some VHF radios having a GPS already built in. In this situation the user has to make no additional connections apart from connecting up the antenna and power before entering the MMSI number, which can be obtained for free for members of BoatUS.

Another feature of DSC-equipped radios is that if one boater knows another's MMSI number, their calls can be initiated by dialing a number rather than hailing with the boat's name or call sign. Once acknowledged by the receiving vessel, voice communication can be continued in the normal way.