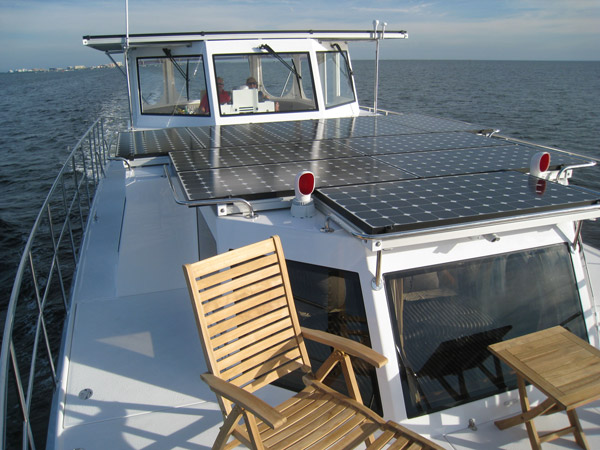 A solar panel is essentially a battery charger that transforms sunlight into an electrical charge.

Then, from the batteries, the energy is used to run 12vDC appliances (lights, pumps, fans, etc.) as well as 120vAC appliances when an inverter is utilized (TV, radio, satellite dish, and microwave). An inverter is a separate unit that transforms the 12vDC current coming out of the battery into 120vAC for use with most appliances.

Two types of solar panels to consider are polycrystalline (crystalline) and then-film. These panels vary in manufacturing, performance, appearance, costs, and installation.

Crystalline panels have a multitude (usually 36) of dark reflective blue or gray wafer-like cells soldered together in series.

Thin film panels, made with amorphous silicon cells, which are of a more uniform dark brown or gray color, can be are either rigid or flexible. Thin film panels are about 50% as efficient per unit area as crystalline, but are more reactive under low-light conditions, i.e. cloudy or rainy skies. They can also offer the convenience of flexible mounting options.


How Long do Solar Panels Last?

Over time, all solar cells have a tendency to degrade slightly under the sun’s rays. Crystalline panels have a much slower degradation factor than thin film and will therefore continue to produce energy for a longer period of time. Warranties will reflect this: crystalline panels are often guaranteed from 20 years to lifetime. Thin film panels receive shorter warranties (usually from 2-5 years), but have been known to still be putting out a charge for up to double that time.


Will my Solar Panel Work in Indirect Sunlight? In the Shade?

Yes, solar panels will produce energy even if they are not placed under direct sunlight. It is to be noted, however, that the power output of a solar panel is proportional to the amount of light that reaches its surface. If you are only getting about half the amount of light that you would be getting under full midday sun, you should expect your panel to produce about half the amount of power. For example, a solar panel can generate from 50- 70% of maximum output under a bright overcast day, but only 10-20% under a dark overcast.


Can I Install a Different Size Panel to the One I Currently Have?

Yes. If you wish to upgrade you solar system, but want to use a larger (or smaller) size of panel, it is possible to do so. For instance, if you currently have a 50-watt panel, it is possible to add a 100-watt panel by connecting them together within the same system. Inversely, the same is possible if you want to add a 50- watt panel to an existing 100-watt. The only limiting factor is the size of your charge controller. Make sure that the controller is powerful enough to handle to total output of the solar system. For example, a 7-amp controller can only handle a maximum charge of 105 watts, so if you are increasing your total output to over 105 watts you will need a larger controller.


Can I Install a Different Brand of Solar Panel to the One I Currently Have?


How Do I Mount My Solar Panel?

Select a location where your solar panels will get maximum daily sunshine exposure avoiding any shade. Popular mounting locations for rigid panels include bimini tops and radar arches, as well as deck mounting. When deck mounting, use spacers to allow airflow between panel and deck. Use silicone wherever holes are made through deck. Flexible panels can be mounted on almost any surface and are usually held down with bungee cords or straps.


What Size Solar Panel Do I Need?

The chart at the bottom of the page gives an example of what a 100-watt panel will run in a typical week. The panel will generate approximately 3,500 watts hours of energy per week (100 watts x 7 days x 5 hours), which can be used to run a number of appliances and electrical devices. To get an idea as to what a 50-watt panel will run, simply divide the numbers below by 2, or multiply by 3 for a 300-watt system. To estimate how much energy you need, just add up all the electrical drains (lights, pumps, electronics, appliances, etc.) that you typically use in a day. To do this, multiply the nominal power rating of each device (ex: 60-watt light bulb) by the amount of time you expect to use it in a day (ex: three hours). Add up all these and divide by 5 (the number of hours per day you have to recharge your batteries using solar panels). This should give you a good idea as to the size of the solar system you need to keep your batteries from draining.