For those impacted by Hurricane Isaias, we hope you and your family are safe. We are here for you. Policyholders, you can easily file your claim online. Learn More 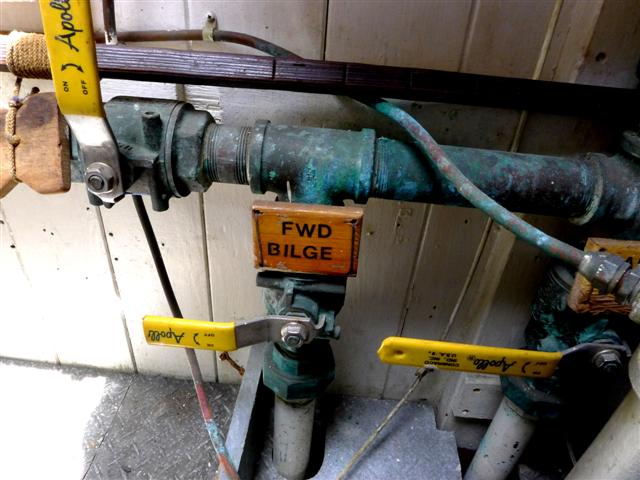 
If you rely on a bilge pump's advertised "flow-capacity rating" expressed in gallons per hour (g.p.h.) or gallons per minute (g.p.m.), you may end up with a bilge pump that's woefully inadequate for your particular needs. The numbers printed on the box are derived from testing under laboratory conditions that do not reflect the working conditions faced by the bilge pump once installed on your boat. The capacity rating is based on the pump having a full 12 volts of power and no "head."

"Head" is broadly defined as the resistance the pump has to overcome.

"Static head" is the distance between the surface of the bilge water and the highest point in the system, which is either the discharge opening in the side of the boat or the top of the hose if it's configured to include an anti-siphon loop.

"Friction head" is resistance related to a variety of factors, including the bilge pump hose material, length and diameter; the through-hull fitting, flow rate, temperature, and contaminants like oil.

Taken together, static head and friction head form "system head," which the pump must overcome to get the water out of your boat, and which usually is not accounted for in the advertised flow capacity rating.

There are really four important choices to make about your bilge pump system: which pump, which hose, which through-hull fitting, and where to place the discharge opening.

Hoses: Smooth-bore hoses offer less resistance to water flow than corrugated hoses. A 1 1/8" corrugated hose, relatively inexpensive and readily available tubing advertised as bilge pump hose, offers much more friction than the harder-to-find and more costly smooth-bore hose. The ribs in corrugated hoses offer the greatest resistance to flow because they create eddies near the hose walls that narrow the channel the water flows through, thereby reducing the amount of water a bilge pump can move in a given period.

Through-Hull Fittings: Because they are smaller in diameter than the discharge hose, through-hull fittings contribute significantly to friction loss in bilge pump systems. A common 3/4" through-hull fitting can add the equivalent resistance of several feet of hose to the bilge system head. Water flow can be reduced even further by the through-hull opening. Fittings with thicker walls are especially restrictive of water flow.

Discharge: The discharge through-hull should be at least 8" above the actual full-load waterline at maximum possible heel. If placed lower, install an anti-siphon loop to keep water from entering the discharge — simply loop the hose as high as possible, install an anti-siphon vent, then lead it down to the discharge. However, if you can avoid having to do this by installing the thru-hull fitting high enough in your hull, there will be less overall system friction head. Also remember that if there is enough of a rise in the hose above the pump, as there may be, for example, with a vented loop, water will flow back down and out of the hose into the bilge when the pump stops because of its automatic switch. If enough water flows back it may activate the switch again and cause the pump to cycle.

Pump Capacity: Once you've taken all of the above factors into consideration, you can see that you should not rely on the capacity numbers printed on the bilge pump box. A pump rated at 500 g.p.h. would only give you that performance if it were pumping water in an unrestricted open flow where gravity, head, and other factors were not at work. Buying a pump one size larger should enable you to overcome the 15-33% drop in performance you can expect once you install your pump. It's also important to have not one, but two pumps, the second mounted higher than the other (it's switch also) as a backup. Bilge pump alarms are very important also because they alert you to excessive water coming in and hopefully enable you to solve the problem if you have a serious leak before it becomes too serious to fix or too hard to find.

Remember to keep your battery charged so your bilge pump will continue to operate when you're not aboard. Also, remember that it is illegal and environmentally unsound to discharge oil and certain other wastes overboard. You can purchase an inexpensive and long-lasting "bilge waste absorbent pad or other equipment" to absorb oil, gasoline, transmission fluid, and other sludge in your bilge.