Peter Obetz: Going With The Flow

Peter Obetz keeps on sailing through adversity, navigating an economic squall and a hurricane-strength life-and-death crisis. 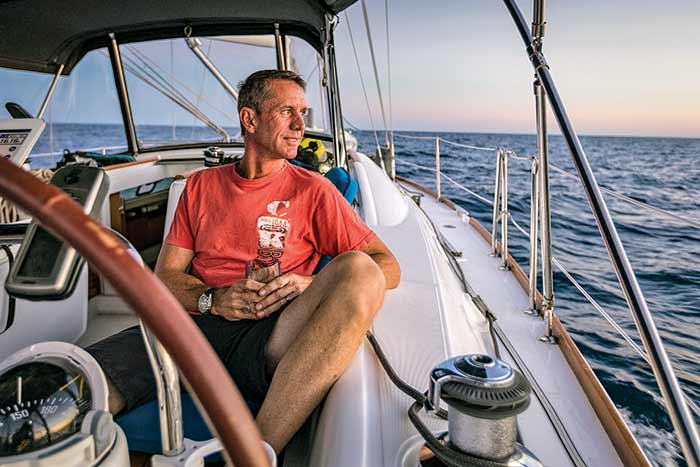 After a major health scare and the effects of COVID on his photography business, Peter Obetz once again reinvented himself as a successful yacht broker.

The shifting winds and changing tides of life are nothing new to Peter Obetz, 57, of Bradenton, Florida. His photography business stalled when COVID-19 shut down the world in 2020. The sailor, who lives aboard his Leopard sailing catamaran with his wife, Christy, used the downtime to transform himself into a broker for Denison Yacht Sales just as every facet of the boating industry started booming in our new socially distant society.

"We built a really successful wedding photography business here, and then everything got canceled, Every venue canceled everything, so I had to do something," Obetz explains. "And lo and behold, I had no idea that what could have killed the boating industry instead exploded it."

As a lifelong boater with a Coast Guard captain's license — and a person who enjoys people — Peter quickly found his groove and was awarded New Broker of the Year from Denison.

This wasn't his first major life and career transition, though. In 2004, Peter was at the height of his 20-year law career — named a partner in his Missouri law firm and elected president of the Kansas Trial Lawyers Association. Then he was diagnosed with esophageal cancer.

"I went from the first symptom — it felt like food was getting stuck in my throat — to not being able to eat any solid food in 30 days," he explains. He found himself at the Mayo Clinic in Rochester, Minnesota, where it took 10 days to diagnose and pinpoint the cancer. Peter was given a 10% chance of survival and made the decision to have surgery the next day, despite learning it's among the most traumatic of operations.

During nearly 10 hours in surgery, his esophagus as well as the lower third of his stomach were removed. His organs were rearranged, and his stomach is now situated vertically behind his breastbone. Adding to the trauma, Peter could not eat, but he also couldn't be given IV nutrients. "They gave me IV fluids, but no calories for about nine days," he describes, "because they couldn't risk the site opening and allowing any food into my chest cavity, which could have made me septic." Then came intense chemo and radiation. The previously fit and active Peter, who lifted weights regularly, went from 215 pounds before surgery to 147 pounds afterward. 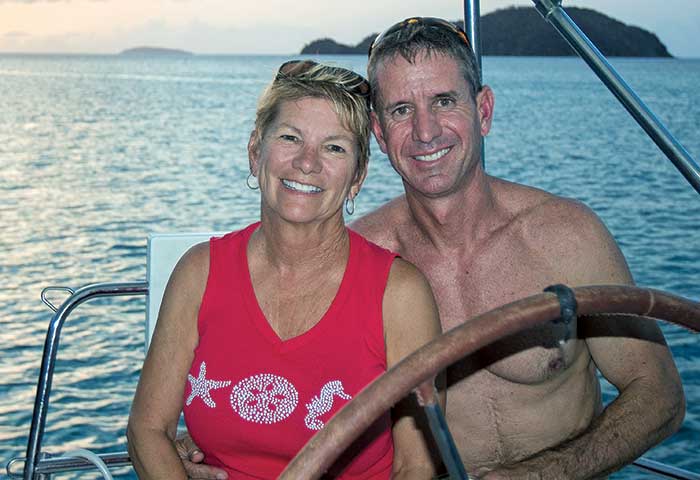 Peter and wife, Christy, find solace on the water during turbulent times.

While he beat the odds and survived, his daily life is forever altered. He has to carefully monitor what and when he eats, and where he is — because he often has to put his feet up. Digestion issues can cause a chain reaction that leads to a sudden drop in blood pressure and blood sugar. Today, the ever-adaptable Obetz plans out his days — whether that's doing photography, working as a broker, or sailing and entertaining friends — around what to eat and when. But giving up boating wasn't an option.

Obetz first sailed a Sunfish as a kid and had several other boats throughout his life. He and Christy enjoy coastal cruising to places like Apalachicola, the Keys, the Bahamas, and chartering in the Caribbean, with the Dry Tortugas being one of their favorite places.

When he left his law career, he bought a Beneteau 40 named Serenity. They kept the boat in Florida and split time between there and Kansas City, where he took his photography from a hobby to a career. After a few years, they moved full-time on the boat. Three years ago, they switched up to a new Leopard 40 named Lady Grace. In a few years, they hope to retire — for good this time — and sail Lady Grace around the Caribbean.

"I've never really factored in my age or Christy's as being a limiting factor in any way," he says. "But the reality is, as we get older our balance isn't quite the same and our strength isn't quite the same. So, we want to go and do it while we can."