Give Your Boat A Lift

Lifts are a convenient way to store your boat when not in use. But poor maintenance and misuse can lead to damage. 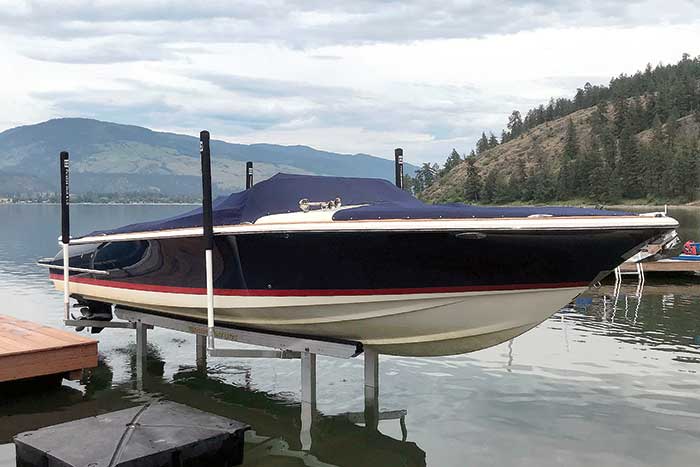 Boat lifts can protect your boat, but only if they are correctly maintained. This Chris-Craft requires no bottom paint since it is lifted clear of the water and parked on the lift when not in use.

Boat lifts deliver multiple benefits. They keep the boat out of the water when not in use, so antifouling paint may not be required as the bottom is unlikely to get very heavily fouled. And if boats are securely held, you won't need fenders to prevent the boat from banging into the dock and getting damaged. Also, you don't have to worry so much about tying up for tides. For all the positive points of owning a boat lift, there are, however, some things that owners need to be aware of; top among these is not overlooking their maintenance.

When a lift fails, it can do significant damage to your boat. One GEICO-insured owner in Illinois left his boat on the lift during the winter at his lake house. He winterized the boat and did everything he could to be back on the water quickly the following spring ... or so he thought. The one thing he forgot to do was to remove the transom plug so that any water accumulating in the boat could drain.

During the Midwestern winter, the vessel filled with snow, adding thousands of extra pounds to the weight of the boat. The combined weight of the boat and snow far exceeded the safe working load of the lift, which collapsed, dropping the boat onto a submerged piling and ramming a large hole through the bow. Both boat and lift were deemed a total loss. 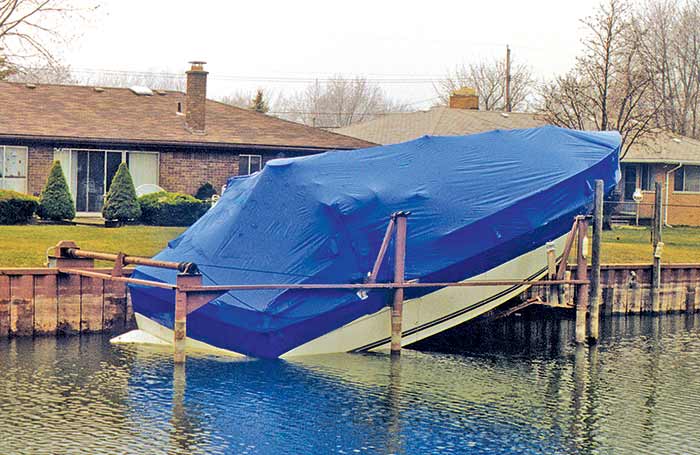 This lift collapsed due to a lack of maintenance. One of the wire cables rusted through, dumping the aft end of the boat into the water. Thankfully no one was hurt, and the boat suffered only minor damage. The lift was not so lucky and experienced a bent frame, rendering it a complete write-off.

But this isn't a scenario that only happens in the winter. Forget to remove the drain plug(s) or allow the drains to become clogged with debris, and the boat could fill with rainwater, which can also lead to collapse.

During the past five years, GEICO | BoatUS has seen a dramatic drop in the number of claims involving boat lifts. Although we collect claims data on what went wrong, we don't have any data on what insured owners are doing right, or the reasons for the drop in the number of claims. It's possible, but unlikely, that boaters are using lifts less. It's more likely they are taking increased care with maintenance — a big plus.

For the most part, boat lifts operate without complaint, but that doesn't mean they're maintenance-free. Every time you use the lift, rinsing it off with freshwater will go a long way toward preventing corrosion — especially important if you do your boating in salt- or brackish water. "Washing your lift is one of the best things that you can do to prolong the life of the unit," explains Steve Nanda of IMM Quality Boat Lifts. "You'll likely be washing off the boat after an excursion anyway, so spend a few extra minutes washing the lift, too."

Our claims files reveal that the Achilles heel of lifts is cables, especially when it comes to breakage. At least once every year, carefully inspect the cables for corrosion, fraying, and other issues. If you see broken strands, replace the cable. Nanda says, "Stainless steel work hardens (meaning it becomes more brittle the more it is used), so paradoxically the more you use your lift, the sooner you'll likely have to replace the wire cable." His findings back up those of GEICO and BoatUS 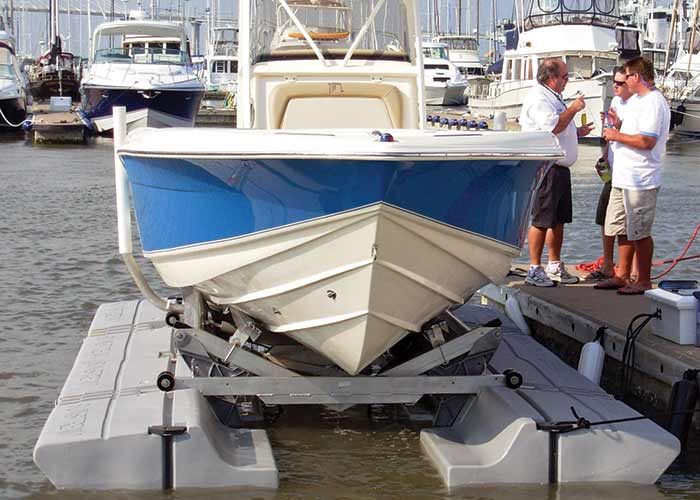 With no permanent installation requirements, inflatable lifts like this are popular with boat owners who rent their slip or who otherwise do not want the expense and difficulty of installing a more traditional boat lift. When deflated, they can be easily removed from the water for cleaning and maintenance.

"Boat lifts are pretty reliable, but the cables are the weak point of any boat lift," says Nanda. "Typically, a complete set of new cables costs around $100, so replacing them regularly is cheap insurance." Also remember that not all cable damage or wear may be visible. There could be broken strands and corrosion inside the cable, severely reducing the lift's ability to hold the weight of the boat.

Many manufacturers recommend regularly wiping down the wire cables with a little oil. The oil lubricates the strands to protect against internal chafe but also helps repel water and slow corrosion. Avoid using grease; this can do more harm than good. It attracts dirt, which increases wear and may cause premature failure. Some manufacturers recommend replacing cables every five to seven years. Follow manufacturer guidance for your specific lift with regard to recommendations for the type of oil and other lubricants and cable replacement.

Keep a safe distance from the cable as it's lifting the boat. It could cause serious injury if it snapped. Also, most advise to NOT use the lift to ride up or down in the boat. Lifts are not intended to be elevators for people.

Don't be tempted to replace galvanized cable with stainless steel or vice versa. Sheaves, blocks, and pulleys are of differing diameter for the two types and are not cross-compatible. Use only the size and type of cable as recommended by the manufacturer.

Cables can get snagged unless they're free to wind and unwind from the drum. If a cable doesn't run correctly due to a kink or other problem, it may develop a "riding turn" — one cable gets tightly jammed under another wrap, and the winch can't move up or down. If you suspect some problem with the mechanism, don't try to clear it with your hands. Use tools. If the cable drum were to move suddenly, you could lose a finger or two. If you are in any doubt about what you are doing, seek help from the manufacturer or installer.

On the majority of boat lifts, the boat rests on bunks, typically bolted to the lifting frame. The only way to check these properly is with the boat removed from the lift. Are the supports corroded? Are there missing or rusted bolts? Are the wooden bunks, including covers, in good condition? If any of these common areas are suspect, now is the time to address them before they fail, damaging the boat.

Is The Lift Large Enough?

One of the other issues that GEICO and BoatUS often come across, and a frequent reason for lift collapses, are owners who buy a larger boat but don't consider the increased weight of the new boat, motors and other gear. The lift may have been fine with the old boat, but the new boat may prove too heavy. The weight of the boat, motors, and gear should never exceed the safe working load of the lift. An allowance must be made for water, and even snow, that may collect in the boat adding significant weight to the rig.

Even if the lift is large enough for the new boat, the bunks will likely need repositioning. The boat's underwater shape will probably differ, and bunks may need to be moved in or out, or be replaced altogether, to accommodate the new craft. If the new boat is significantly larger than the previous one, you may need to position the boat farther forward on the lift so the load is more equitably distributed between the front and back hoist mechanisms, especially if the motors are larger and heavier than the previous craft. If in any doubt, always consult the manufacturer for advice. 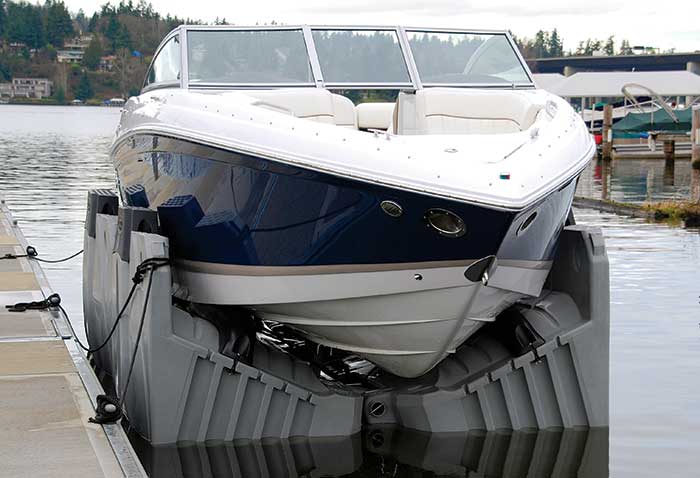 There are alternatives to the traditional lift. This one from Sunstream has four rigid inflatable tanks. To launch the boat, the air is let out of the chambers, which then partially submerges, allowing the boat to float clear. On return, the boat is driven in between the tanks and a pump in each tank refills them with air until they float up, lifting the boat with them.

Poor wiring to the motor on electric lifts can be a source of lift failure. Corrosion may cause cables to become disconnected or increase resistance in the circuit to such an extent that it causes the breaker to trip or the motor to run very slowly. If you suspect an electrical fault, turn off the power to the dock before touching anything on the electrical side. Even if the lift works correctly, part of your annual inspection should be to check the entire electrical circuit.

By their very nature, lifts are often at the end of a reasonably long dock, which means that the electrical service cables also have a long way to run. Among other things, this could result in serious voltage drop to the electric motor. Trace the cable from the source to the motor, making sure that it is adequately supported throughout its length.

It's important to ensure that the boat is secured to the lift. This is important to do as a matter of course, but especially critical when extreme weather is predicted. High winds may dislodge the boat from the bunks, damaging both boat and lift. Straps around the boat will secure it and help to keep it in place and safe. GEICO and BoatUS claims files show that boats strapped down to lifts during hurricanes have generally fared well, but only where boats have been secured to the lift and also to secure points on the dock, which stabilizes both the boat and lift.

In a hurricane storm surge or any other abnormally high water, the lift may not be high enough, and the water may lift and damage the boat while it's in the lift or by partially floating it free from the lift. When the water reaches the boat, waves can be particularly damaging to the boat in the lift, possibly dislodging it, leaving one end to hang down in the water, which will likely flood the boat. Depending on your lift and other circumstances, you may need to take special steps in a storm surge or other flooding, perhaps even removing the boat and storing it ashore.

A Word On Electrical Shock Drowning

An electric cable that droops into the water has the possibility of causing electrocution of anyone swimming or falling into the water close to the dock, something known as Electric Shock Drowning, or ESD. Electricity always wants to return to ground, so if a person happens to be in the water near the source of the electrical leak, he or she may get shocked. Often the person is not killed outright by the electricity, but the shock paralyzes their muscles and, unable to help themselves by swimming to the dock or the shore, they drown.

how to diy maintenance