Adding colored courtesy lights under the gunwale was an easy project that upgraded his nighttime boating and fishing experience. 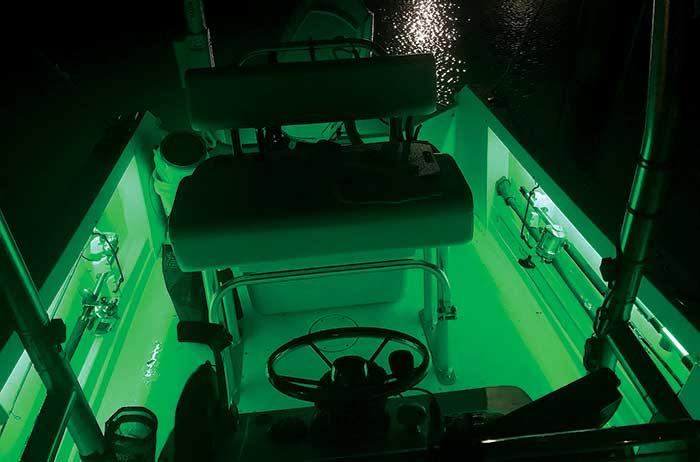 Following several after-dark fishing and cruising experiences aboard watercraft with cockpits awash in subtle, colorful ambient lighting, we decided to look into illuminating our own boat's deck with the courtesy LED option. The systems we liked best relied on lengths of tiny LEDs that spread a path of illumination from under the gunwales, and when we discovered flexible strips of LED lights in various lengths backed by mounting tape for easy application, we decided to install them aboard our 20-foot Aquasport center-console.

There are multiple sources for adhesive-backed, water-resistant LED strip lights intended to be used as indirect courtesy illumination aboard boats. We chose a pair of LED Flex Lights from T-H Marine that come in 48-inch strips and green in color to match the accents, canvas, and underwater lights on the boat. The hue for the latter was chosen after tests conducted by fishing light manufacturers showed that fish are particularly attracted to green lights. Plus, the color doesn't seem to affect my night vision.

Following applicable ABYC standards, here are the steps we took to bathe our deck in emerald for post-twilight fishing and cruising.

Time: An hour, give or take

Cost: Around $100 depending on length of light strips required 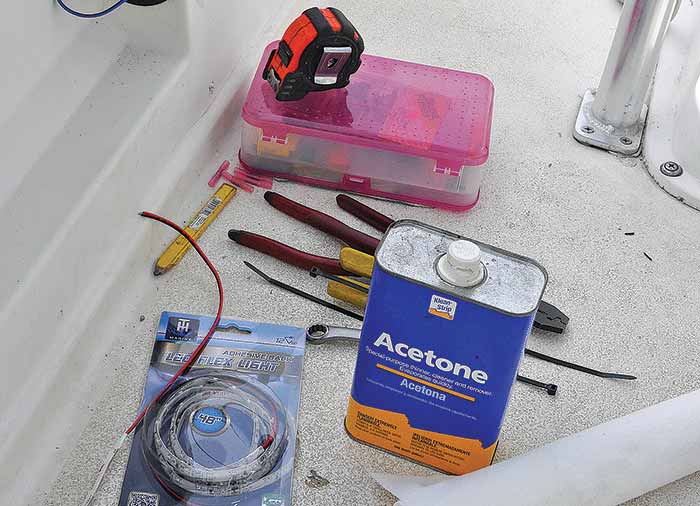 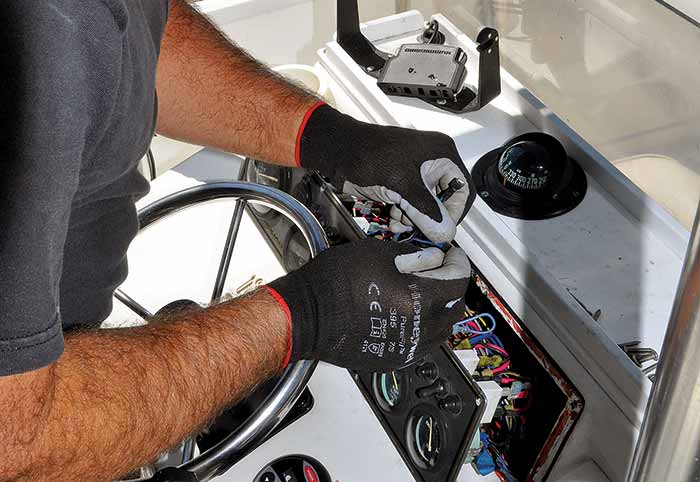 2. Be sure to turn off all sources of power before working with wiring. Measure the amount of wire you will need to reach each LED light strip from the power switch for the courtesy lights at the helm based on the path they will take to remain out of sight under the gunwales. You can create a separate switch or connect to the existing courtesy light switch and display, as we did. To do so, connect a piggy-back spade connector to the switch-end of one wire and a spade or ring connector to the other, whichever is called for to connect to the common negative at the helm and make that connection. The piggy back spade connector will allow you to add the LED positive power connection to the circuit for the existing courtesy lights that are controlled by the switch. 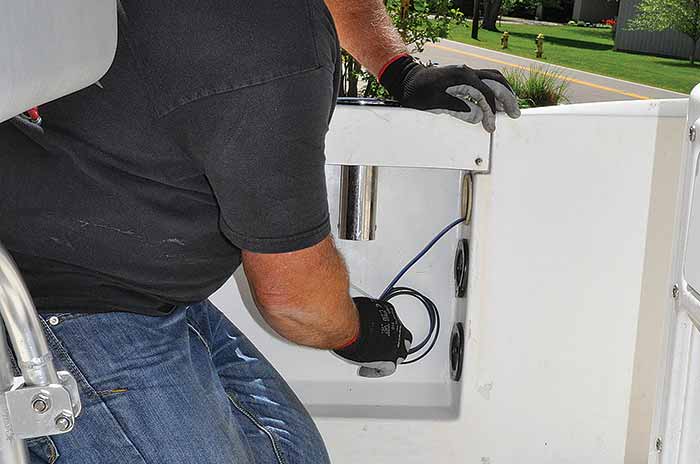 3. Using a fish tape, available access points, creativity, dexterity, and patience as called for, snake each double wire, one to each side, from behind the dash and under the deck to the starboard and port sides of the cockpit. Locate existing access points under the gunwales to allow the wires to connect to those of the LED light strips. Support the wire along the route as needed and following ABYC standards using cable ties. 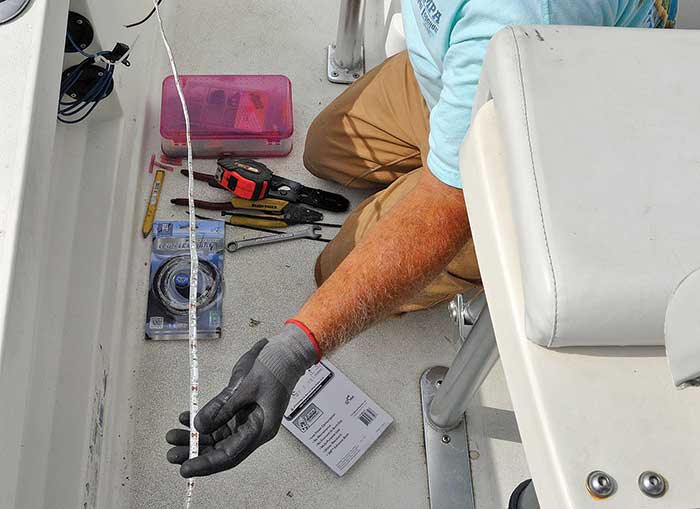 4. Unroll the LED strip and determine its location under the gunwale. 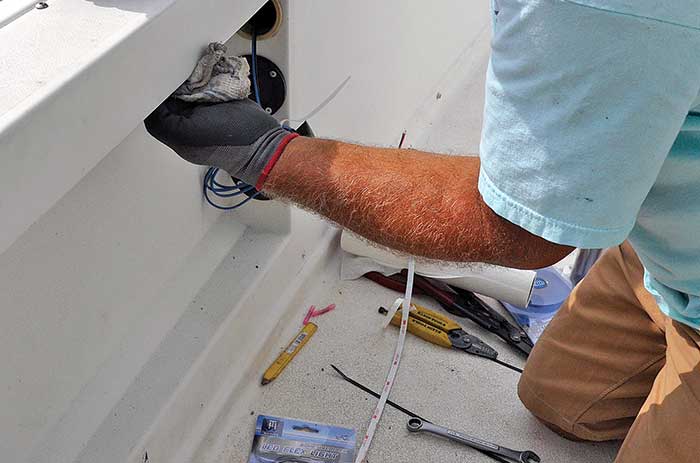 5. Clean the mounting surface with acetone and allow it a few minutes to dry. 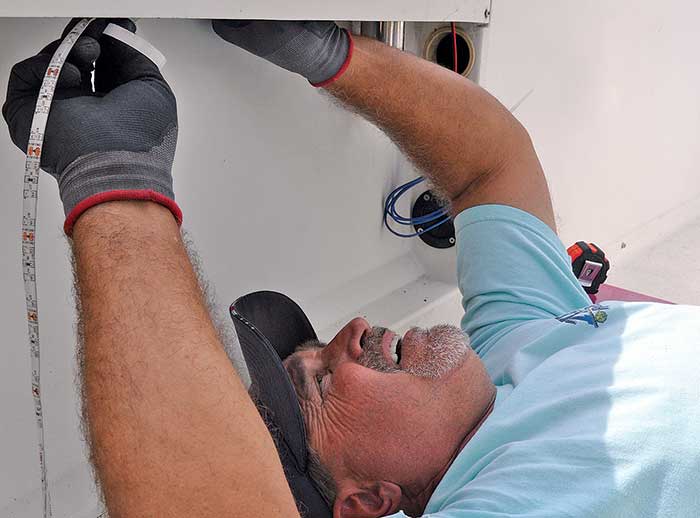 6. Peel the protective backing off the adhesive and set the light strip in place with hand pressure under the gunwale. 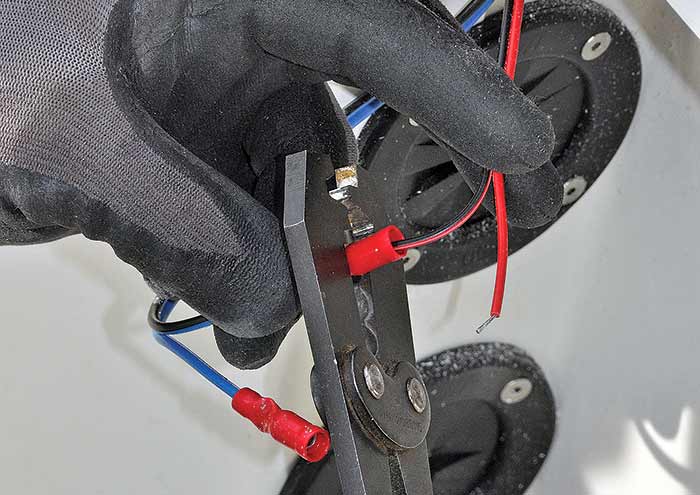 7. Using marine-grade heat-shrink crimps, connect the positive and negative leads from the light strip to the corresponding wires leading to the switch, making certain that the negative and positive circuits are consistent on both strips to avoid crossing polarity. Support the wiring under the gunwales and out of sight using marine-grade adhesive-backed clips. 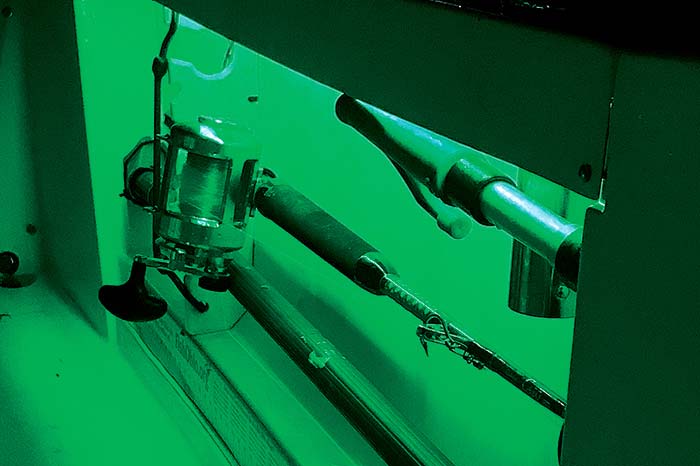 8. Test the circuit by turning on the courtesy light switch at the dash. Do so again after dark and note any negative affects the lights may have on your night vision, which could be dangerous. Then prepare to enjoy ambient LED light on your next post-twilight cruise or angling safari.

how to diy install and repair accessories

A full-time travel and outdoors writer based in Ohio, Dan is in his 20th season hosting the popular syndicated radio show Buckeye Sportsman. He gets around on a pontoon boat and an Aquasport center-console, which he uses for all his DIY editorial projects and fishing features. A USCG Captain (Master 50-ton), he’s a popular speaker at boat and sport shows.