Back In Time On The St. Johns River

A cruising couple takes a detour from The Great Loop to explore this alluring northeastern Florida waterway that offers bustling metropolitan ports and quiet 'jungle' passages.

Let's take a 310-mile journey on an American Heritage River, and step back into history to imagine Florida's colonial-era British and American pioneer settlers. One of the few major north-flowing rivers in North America, the St. Johns' headwaters emerge at Blue Cypress Lake in Indian River County near Vero Beach to its mouth, where it empties into the Atlantic east of Jacksonville.

The river, the longest in Florida, has three distinct phases — wide, deep, metropolitan, and commercial; then a broad, deep estuary with woodlands and small towns; and finally, narrow, deep, and twisting with subtropical vegetation and trees growing to the water's edge. Its headwaters are just 27 feet higher in elevation than where it ends, so the slow drop rate of 1 inch per mile makes it one of the "laziest" rivers in the world, according to St. Johns Riverkeeper, a nonprofit whose mission is to protect and advocate for the river. We'd heard intriguing stories about this river, so we planned a side trip on our Great Loop adventure aboard our 52-foot Halvorsen trawler, Monarch.

Leaving the Intracoastal at Mayport's Atlantic ICW/river junction, we noticed a large dry dock facility, at the time housing a narrow-beamed Naval warship in for repairs. Approaching Jacksonville, the river is busy with commercial and recreational traffic. Several bridges span the waterway, including an ultramodern one at Dames Point. 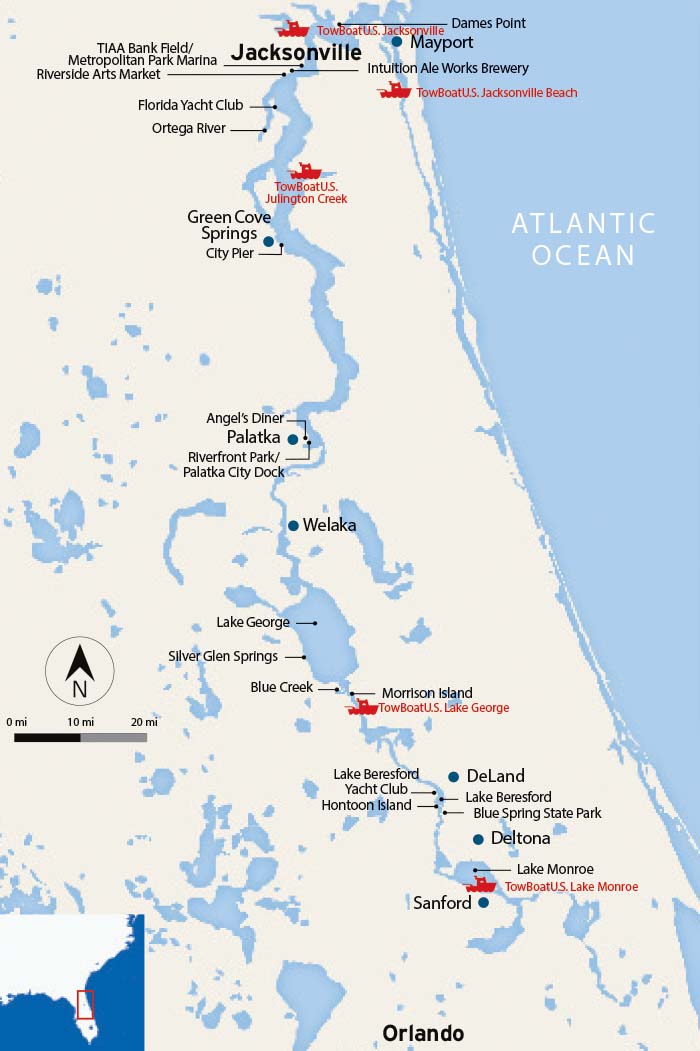 St. Johns River and its chain of lakes.

The only metropolitan area on the St. Johns River, and the first port from the river's mouth, Jacksonville has been a popular winter resort since the Civil War. Arriving on Palm Sunday, we found the annual Blessing of the Fleet taking place on the downtown waterway. We docked at the Metropolitan Park Marina next to a power catamaran festooned with palms and freshly blessed. Boaters dock here and walk to Jaguars' home NFL games, tailgating on their boats before heading over to TIAA Bank Field. This marina is a long way from restaurants downtown, making Intuition Ale Works brewery a welcome watering hole within walking distance.

For a fun dinghy excursion from your downtown slip, head to the small, free day dock at the Riverside Arts Market near the I-95 bridge over the St. Johns River, held every Saturday from 10 a.m. to 3 p.m. Here you'll see creations of pottery, paintings, jewelry, and accessories while enjoying live entertainment ranging from barbershop quartets to belly dancers. The accompanying farmers market offers fresh local produce, meats, honey, plants, and spices.

Back on the St. Johns River, we continue upriver to the town of Green Cove Springs, located in a shallow, pretty cove on the west bank and named for the medicinal sulfur springs found here. 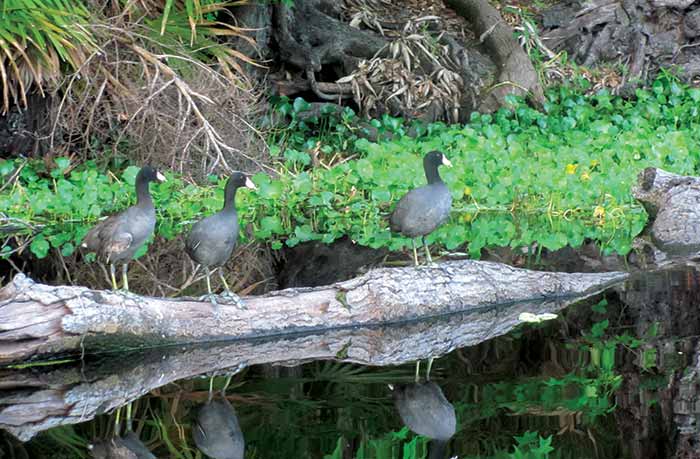 American coots are a common sight in Florida's wetlands and marshes.

Approaching Palatka, the river transitions from a 2-mile-wide brackish waterway to a winding, jungle-lined channel. Once known for logging and cattle ranching, the town was served by seven steamboat lines in the mid-1800s, which brought goods — and tourists — to the town's luxury hotels and restaurants. But railroads and the rise of coastal cities like Palm Beach and Miami put an end to Palatka's prominence as a vacation haven and transportation hub. Now, the downtown has new landscaping and streets are clean. The remaining industry is the Georgia-Pacific paper mill which produces a half-million tons of paper products annually. 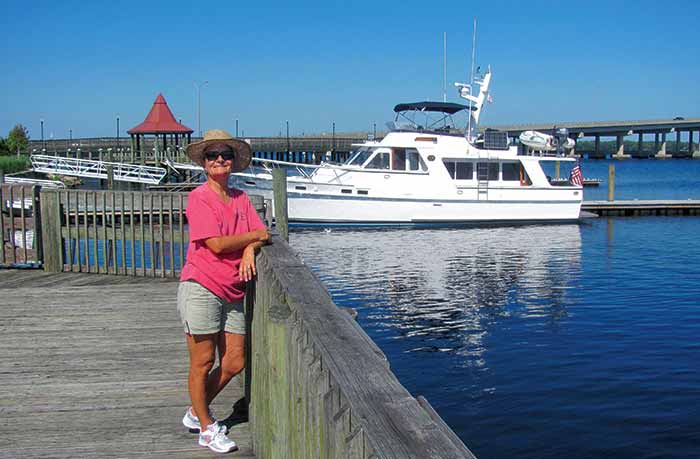 The author poses in front of Monarch at Palatka.

Riverfront Park is the centerpiece of the waterfront, and in tribute to the area's Naval influence, is anchored by a torpedo statue. In addition to city-owned fixed docks (boats up to 50 feet), Palatka has two complimentary floating docks. Monarch docked at the latter for the night with no problem. An alternative is to anchor near the wooden docks in good holding and dinghy to the town dock. 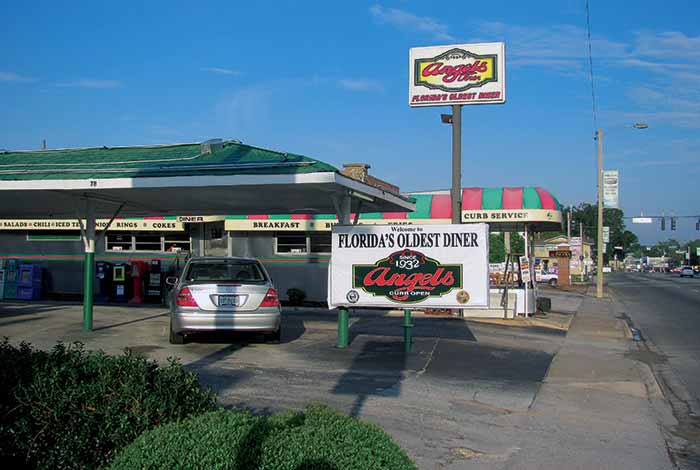 Angel's Diner in Palatka is said to be the oldest diner in Florida. Stop by to sample the all-day breakfast menu.

Half a block from the waterfront and built in a converted rail car, Angel's Diner is purportedly Florida's oldest diner, established in 1932. Breakfast is served all day. Try the "Black Bottom," which is scrambled eggs, bacon, and ground beef, all served on a bun, with a side of fried green beans or okra.

Just south of Palatka, we passed the quaint Palatka Yacht Club. After the narrow, twisting, turning river with lots of tributaries teeming with fish and fish camps, the waterway broadens into the second largest lake in Florida, Lake George, almost 10 miles across. (Okeechobee is the largest.) Some of the nearby springs that feed the St. Johns River are remnants of an ancient ocean trapped beneath the Florida peninsula. They continue to push up saltwater, which causes Lake George to be saltier than the river at Green Cove Springs, even though the latter is 70 miles closer to the ocean. The lake's southern exit is prominently marked with a fence-like funnel.

Shortly after crossing Lake George and resuming the narrow channel, we anchored for the night behind Morrison Island, launched the dinghy, and went for a jungle cruise through Blue Creek, a convoluted channel with natural banks interspersed with a few rustic houses. Along the creek, a local bird lover installed scores of gaily painted birdhouses affixed to tree trunks or suspended from limbs. 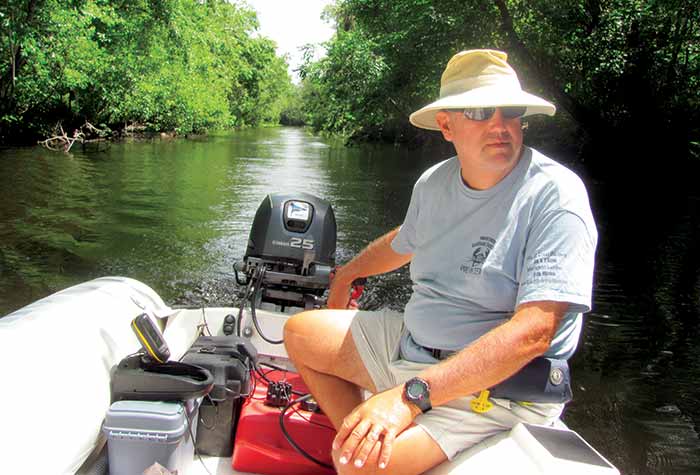 Marty and Jerry took a "jungle cruise" in the ­dinghy on Blue Creek.

Indeed, Florida fauna and flora abound here. We saw lanceleaf arrowhead flowering wetland plants and numerous hummocks, where layers of soil and peat have formed enough elevated ground for trees to gain a foothold. We spotted lots of alligators, many more than we see on the west coast of Florida. Demonstrating the species' shyness, one granddaddy slithered into the water abeam of our dinghy — the widest part of its tail was approximately 60 inches in circumference. Turtles and coots are profuse. Thirsty from touring, we stopped at a creekside watering hole for fish camp-style refreshments.

A planned side trip into Lake Beresford to stay at Lake Beresford Yacht Club was thwarted by low lake levels. Instead, we anchored 2 miles upriver in an oxbow at Hontoon Island and dinghied into the lake for fine dining at the yacht club.

The oxbow anchorage was the perfect spot for our foray to Blue Spring State Park the next morning. We beached the dinghy under the watchful eye of a local marine sheriff, who greeted us politely and verified that our dinghy complied with waterway regulations. Then we set off on the one-third-mile boardwalk. The 2,643-acre park includes some spectacular tree specimens and is habitat for at least 15 threatened or endangered plant and animal species. 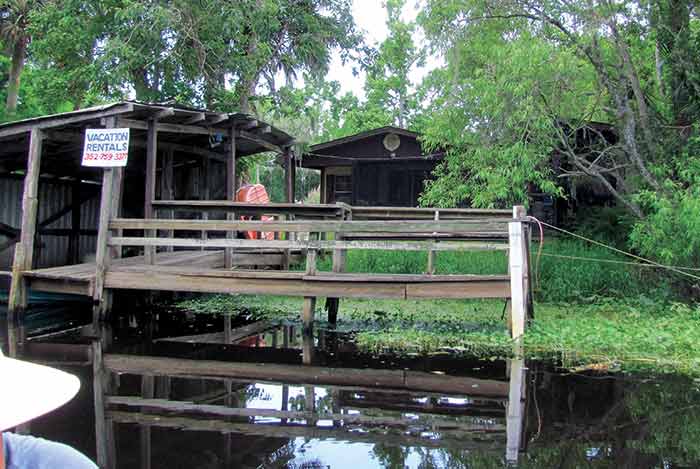 The source of the park's namesake spring, originally termed "the boil," discharges 104 million gallons of freshwater daily, with a consistent temperature of 72 degrees year-round. This makes ideal conditions for West Indian manatees to congregate in winter. More than 200 of the creatures gather here, leading to the spring being billed as Florida's premiere manatee refuge. In addition to the wintering manatees, the spring is home to alligators, frogs, a host of migratory birds, scrub jay, gopher tortoise, black bear, and many types of fish — we saw large schools of gar.

The area was settled by Louis Thursby, who, in 1872, built a three-story farmhouse on top of a large Indian midden, or shell mound, where the historic house still stands. Thursby, his wife, and several children lived here, using the freshwater from the nearby spring to farm citrus and other crops. Before the railroad rolled through in the 1880s, Thursby's Blue Spring Landing was the "Grand Central" of steamboat activity on the river, shipping tourists and goods to and from Jacksonville and beyond. Today, visitors may swim in the spring, camp, or rent one of six park cabins, and rent canoes, kayaks, rafts, and snorkel gear.

After our tour of the park, we returned to the dinghy for more jungle cruising. The banks were lined with dead and live cypress, and we saw many pairs of eyes in the water, showing us where the alligators lurked. Some areas looked non-navigable until we tried them, and we had to make sure we remembered how we got there and how to get back. On the hook that night, the sounds of the jungle kept us awake — including the deranged bass and tenors of frogs (sounding like a Bahamian "rake and scrape" gone awry), grunts, bleating, honking, rustling in the bushes, owls hooting. Ah, nature!

Between Mayport and Sanford, the St. Johns River is at least 5 feet deep (and much deeper downriver from Jacksonville, an ocean-going port), with some well-marked shoals. Bridge clearance is set at a minimum of 45 feet by two fixed bridges, the first just south of Green Cove Springs. There are railroad bridges around 7-foot vertical clearance, but these are open unless a train is coming.

Anywhere from 10 days to two weeks is ample time to cruise the St. Johns River, which is popular year-round with recreational cruisers. You'll see craft of all kinds: bass boats, small runabouts, midsize cruisers, houseboats, and pontoon boats. There are some no-wake areas, particularly around Blue Springs State Park, which has a large manatee population.

While boaters can travel another 20 miles upriver to Sanford, we had to move north, and reluctantly turned and headed back downriver. Overnight, we anchored just off Turkey Island, where pretty homes line the shore near the tiny town of Welaka. Up before the sun in the morning, we watched the day dawn with a breathtaking sunrise. 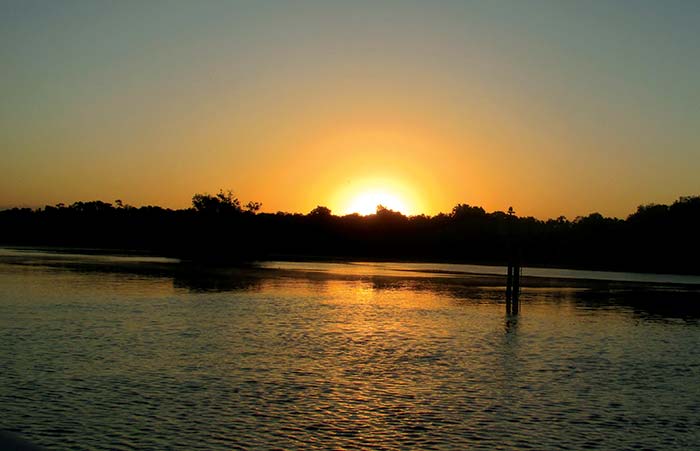 Just upriver of Ortega River's mouth, we docked for the night at the Florida Yacht Club, the oldest yacht club in the state, founded in 1876. We were greeted by a strange sight on the lawn: adults wearing funny hats were rummaging around in the bushes. We had happened upon the club's annual Mad Hatter Day, where members vie for the most outlandish Easter hats while searching the grounds, not for hardboiled eggs, but for hidden mini-bottles of adult libations. After joining in the evening's festivities, we rose early for the Florida Yacht Club's Easter sunrise service on the lawn. Underway, we passed by downtown Jacksonville, riding the current downriver to once again join the Atlantic ICW headed north. With the St. Johns River now in our logbook, we looked forward to the next leg of our Great Loop adventure.

Head off the beaten path for this legendary cruising charter location with its deep history, great boating, and friendly locals.

Whether you're a snowbird or a local ICW boater, this free monthly newsletter is a must-read for avoiding navigation hazards along the Intracoastal Waterway.

Marty Richardson and her husband, Jeff, have cruised the Great Loop three times aboard their 52-foot trawler, Monarch.