The team, formed last year, is trying to make a mark in the mostly white, mostly male world of competitive fishing. 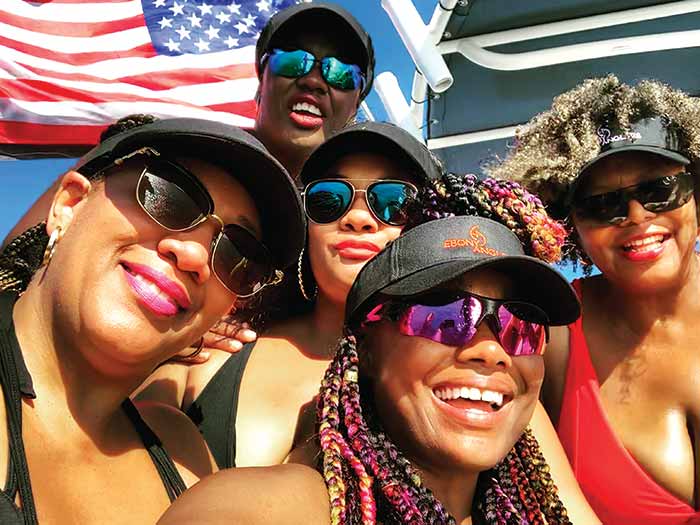 The shooting stars that illuminated the dark sky on the journey to deeper waters had given way to a crisp morning when Gia Peebles felt her fishing rod tense. She gritted her teeth. Her adrenaline surged. She braced herself, gripped her rod tighter and started reeling, all while fighting the waves and current. After a few minutes of coaxing, she spotted rainbow scales glistening on a king mackerel as it neared the water's surface.

"He is a fatty," Bobbiette Palmer said. "That's your name: Fatty."

Soon, the 26-foot boat raced back to shore with the group's haul to be weighed in at Chasin' Tails Outdoors Bait & Tackle. The Atlantic Beach King Mackerel Fishing Tournament had stretched for three weeks. But this, the final day of the tournament, marked the first time that the Ebony Anglers could sync their schedules and sink their lines together. As the women walked from the dock to weigh in, a few bystanders cast curious glances their way. It was probably the first time any of them had come across a team of all Black women in the mostly white, mostly male world of competitive fishing.

It's one reason Peebles, 49, formed the team. She did not fish until she met her husband, William Peebles, a couple of decades ago. But in college, she competed in the World Series four times after becoming the first Black woman to earn a softball scholarship at Cal State Long Beach. So the mix of relaxation and spurts of intense focus in competitive fishing appealed to her.

In June, Peebles noticed a swarm of activity near a pier where she and her husband own an Emerald Isle condo. She watched as teams disembarked after competing in the Big Rock Blue Marlin Tournament. Some women exited the boats, but all of them, Pebbles noticed, appeared to be white. Many Black people, Peebles said, are not exposed to the nautical lifestyle, and the high cost of entry to competitive fishing is a significant deterrent.

She first called Mausi, 47, a longtime friend, about collaborating. The two had fished casually a few times, and Mausi's father was a professional angler. Just the thought gave Mausi goose bumps. She brought along Davis, 44, who also had fishing experience. They next asked Glenda Turner, 56, a nail technician at Peebles's beauty salon, to join.

Palmer, 37, a model Peebles knew from styling her hair, rounded out the team. She initially laughed when Peebles asked her about fishing, thinking Peebles was joking. But Palmer agreed, deciding that she wanted to get out of isolation during the pandemic and try something new.

"We instantly developed a bond," Palmer said. "We're all organized in our own ways, and we fill each other's gaps. Our strengths and weaknesses, they complement each other." Palmer's previous boating experiences consisted of a couple of cruises that left her sick. Turner offered her a motion sickness patch, and Palmer pushed through early stomach-churning outings with the team.

By July, the team had entered its first tournament, the Carteret Community College Foundation's Spanish Mackerel & Dolphin Tournament in Morehead City. That weekend, the Ebony Anglers caught a 48-pound king mackerel to claim first place in the division. (The fish, however, was listed at just 43.06 pounds on a hand-printed board naming the top finishers.)

"It just catches some off guard that here we are," Peebles said. "We're not only female, but we're Black. We're competing and we're doing it well. We're actually winning." 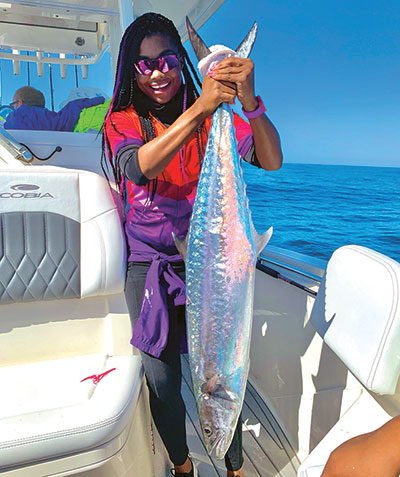 Fatty was their largest catch at the Atlantic Beach King Mackerel Fishing Tournament, weighing 29 pounds. The winning team, Pirate's Pleasure, topped the leaderboard with a catch of 41.61 pounds. The Ebony Anglers did not place, though the team took solace in knowing it had competed much less than many of the 150 other boats.

After weigh-in, Peebles and her husband took some of the fish to a market for filleting. They caught a nap before the team reconvened for the tournament's awards banquet. For the first time, the Ebony Anglers met some of the other competing teams.

Kelly Albritton, a former bail bondsman in Kinston, N.C., claimed third place in the tournament with a 39.51-pound king mackerel. He said he recognized the Ebony Anglers from the weigh-in and introduced himself while clutching his trophy. He said he couldn't believe his eyes when he saw the group of Black women.

The women described their backgrounds, how the team had formed, how they had fared during the tournament.

"Twenty-nine?" Albritton, his mouth hanging open, asked with excitement when they told him the size of Fatty.

"This country belongs to all of us, and I'm just really glad you gals are here. I'm so excited that y'all are into fishing," he said. At one point in life, Mausi said, she would have taken offense to being referred to as "girl" or "gal." Here, she said, most people know one another. Outsiders will draw double takes, especially a fishing team of Black women.

"I think I have to meet people where they are," said Mausi, who is from Detroit. "I felt good that he came and addressed us and just wanted to know more. And I think that that is what is going to be the turning point in our country, when people of different cultures aren't afraid to approach one another and just say, 'I want to learn more about you.'"

A man from California sent a voicemail message saying he wanted to take the team out to dinner and talk fish. Several women have sent messages, inquiring about becoming part of their team.

"You can't just join the Carolina Panthers," Mausi said, referring to the N.F.L. team. "We're not a club. We really want people to understand this is a sport. We're athletes, and we're competitive."

They hope to use the tournament as a tune-up to compete in [the 2021] Big Rock Blue Marlin Tournament, where Peebles envisions her journey coming full circle.

"Hopefully, people are seeing us step into an arena that's normally considered to be dominated by white males and it can inspire others," she said. "Hopefully, we are making an impact on a lot of people, and people of color and, in particular, women of color to know they can step out of their box and do something that they never thought that they could do."

Jonathan rejoined The New York Times in 2020 after previously being a staff writer from 2008 to 2011. He has also been a staff writer at the Los Angeles Times, ESPN's Grantland and Bleacher Report's Magazine. He is the best-selling author of "All the Pieces Matter,’" an oral history of "The Wire," and "Boys Among Men," which documents the N.B.A.'s prep-to-pro generation of players from 1995 to 2005. He is a graduate of the University of Southern California.