From AI and facial recognition to cutting-edge wearables, here's the technology that Vendée Globe racers are using to manage their mental and physical well-being. 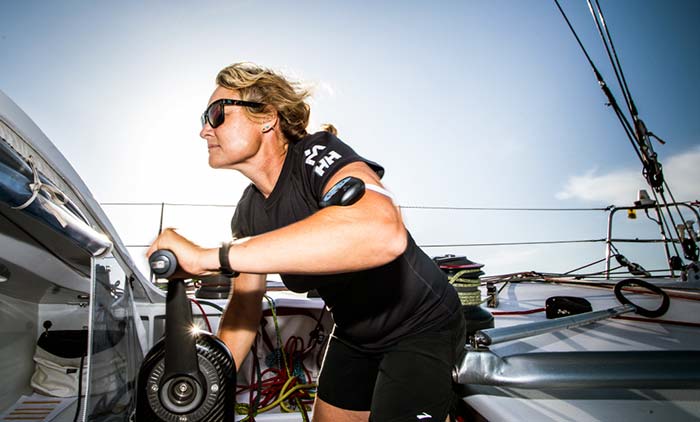 The 2020 edition of the Vendée Globe, a solo nonstop, round-the-world yacht race known as the "Everest of the Seas," is pushing skippers to new physical and mental limits. The advanced foiling technology has made the boats much faster, but there's a heavy price to pay for these performance gains, namely comfort. Skippers must endure noise, slamming, and jolting for weeks on end.

To reduce the risk of breakage, these cutting-edge foiling yachts have been equipped with networks of fiberoptic sensors that detect the load on every element, from the rigging to the foils. But it's not just the boats that are being watched for stress. Teams are using advanced technologies, including artificial intelligence (AI) and facial recognition, to monitor the most determining factor of all — the skipper.

The team behind racing yacht Medallia is using AI to monitor British skipper Pip Hare's emotions in the videos she shares. The technology, developed by her sponsor, market research firm, Medallia, uses facial recognition to identify emotions like joy, effortful thought, contempt, or disgust. If Hare isn't looking as joyful as she has in previous days, the team might give her a call to try to lift her mood.

Watch as Pip Hare and Medallia talk with the BBC about the wellness tech that Hare is using in the 2020 Vendée Globe.

Some, including official race doctor Jean-Yves Chauve, might argue that the biggest challenge facing skippers is sleeping, not sailing. "It's an event in which recuperation is actually part of the performance," Chauve told Reuters in 2017.

In past editions, skippers have slept about five hours a day in two or three blocks. Needless, to say, managing sleep is critical to both performance and safety. The team behind racing yacht LinkedOut has taken a particularly scientific approach to sleep. French skipper, Thomas Ruyant, is wearing a belt that collects data on his heart and breath rate. The data collected makes it possible to measure sleep time and alert him when he's entering the danger zone and needs to get some rest. Similarly, British Skipper, Alex Thomson (retired from the race at the time of writing), used a combination of sensors and high-definition cameras aboard Hugo Boss to track his physiological state. He wore a custom-built biometric sensor on his upper arm that continuously monitored his heart rate, mobility, calorie consumption, sleep, and work-level. Machine learning algorithms processed this data, and an onboard visualization system presented Thomson with information on his well-being.

Watch as the Hugo Boss team discusses the tech being used to manage Alex Thomson's sleep throughout the race.

As in years past, the 2020 Vendée Globe is pushing both human and technological limits. One can only wonder where man and machine will sail next. vendeeglobe.org