Onboard Communications Get More Effective

We review new technology that combines the functions of a VHF radio, DSC emergency signaling, MOB tracking, and an AIS system. 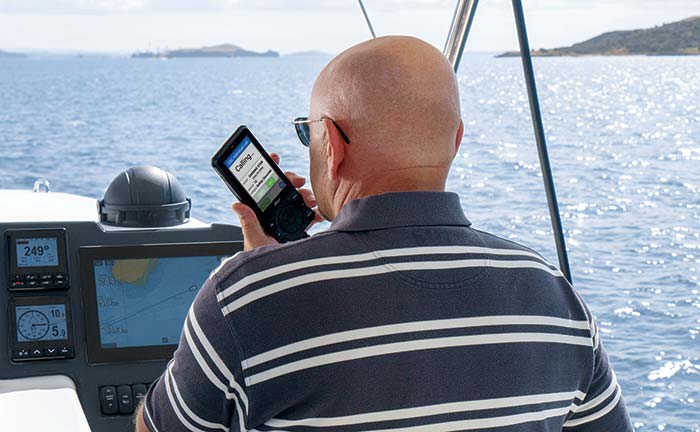 We used to navigate with just a chart and compass, and we had a VHF radio for line-of-sight communications. Much has changed for the better as computer and satellite technology have revolutionized the way we navigate and vastly improved our ability to communicate with nearby vessels. This has improved our safety, especially when it involves coming to the aid of a boat in distress. Here are some of the tools currently at our disposal.

Learn more about AIS and VHF radios through the BoatUS Foundation's online courses. BoatUS Members save 20%. Visit ­BoatUS.org/Courses to ­access.

The indispensable VHF radio (an acronym for Very High Frequency) lets boaters communicate line-of-sight with nearby boats, marinas, and bridge tenders on different channels. We have radios permanently installed at our boats' helm stations, with connected antennas mounted high on the boats to maximize range. Every boat needs a VHF, and manufacturers also offer rechargeable handheld VHFs, freeing the skipper from the helm, and allowing boaters to have a spare for use onboard, in the dinghy, or to grab in an emergency. 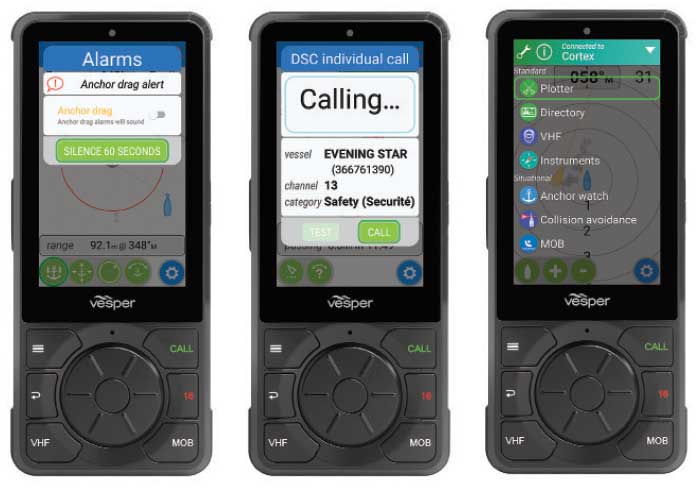 Next came digital selective calling (DSC). If you've bought a VHF radio in the last few years, chances are it has a red distress button on the front. Lift the flap, press and hold the button for five seconds, and details of your vessel, your position, and the fact that you require urgent and immediate assistance are broadcast to the U.S. Coast Guard and anyone else with a DSC-equipped radio within range. The beauty of the system is that it should summon assistance even if you're unable to speak. Alarmingly, however, according to the Coast Guard, almost 90% of DSC-capable radios aren't programmed, making that little red distress button completely useless. 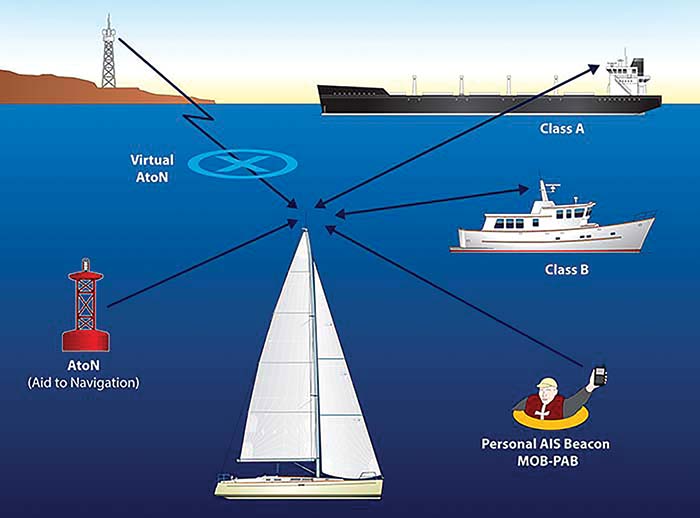 AIS combines GPS and VHF with an AIS transponder that automatically broadcasts your boat's critical info (position, course, speed) and monitors the same info from other AIS-equipped vessels and AtoNs, reducing collision risk.

Another safety breakthrough was AIS (Automatic Identification System), a development that began more than 20 years ago. It combines GPS, VHF radio (AIS uses reserved VHF frequencies; it does not use a VHF radio per se), and an AIS transponder. Once the stuff of commercial vessels, AIS is now available to recreational boaters and is very useful on boats traveling offshore for fishing, cruising, or racing, and for boats traveling in the areas of busy shipping traffic. Boats with AIS transceivers can automatically broadcast critical information, including the vessel's identity and real-time position, course, and speed, using VHF frequencies. It can also automatically monitor the same information of other AIS-equipped vessels. You see them and they see you, substantially reducing the risk of collision, even in thick fog or dark of night, regardless of how far offshore you may venture. For boats not equipped with AIS, radar is the other option to target surrounding vessels, and it is still considered by many to be a primary tool for this purpose.

Is It A DIY Project?

Vesper Cortex installation is fairly straightforward, but it is likely to take some time depending on your particular boat and skill level. If you're uncomfortable doing the install yourself, seek a qualified marine systems installer. I had to run a dedicated power supply, connect to the boat's NMEA2000 network, hook up a GPS antenna, and connect to a VHF antenna already installed on the boat. The process took two days.

These have been the options installed on boats — until recently. A new kind of VHF puts it all together.

Ramping up safety capabilities further is Cortex, from New Zealand's Vesper Marine, one of the first marine VHF radios with touchscreen handsets, integrated AIS transponder, and remote vessel monitoring. This new integrated technology appeared promising, so we decided to obtain a unit, install it, and we've used it in the field for the past few months aboard BoatUS contributing editor Mark Corke's Grand Banks 32. Read his "Field Review Of The Vesper Cortex" below.

Field Review Of The Vesper Cortex

After using the Cortex on my boat for the last few months, I'm impressed. On the face, it looks like many other electronic black boxes found on pleasure boats. But it's what's going on "under the hood" that makes the difference. Cortex has three main functions: a VHF, a vessel monitoring system, and a Class B AIS system. 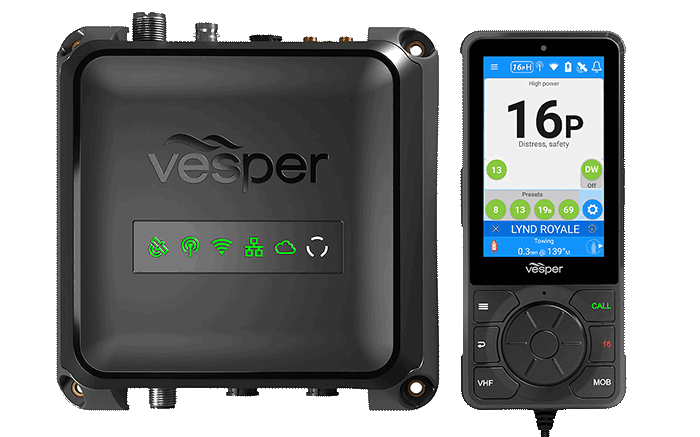 At first it appears that Cortex is just three pieces of gear packed into one box, but the sum of its parts is greater than just those three main functions. I discovered extra functionality each time I used it. To run it through its paces, I took the boat out of the slip in Southport, North Carolina, and into the Cape Fear River (part of the ICW). Coming up behind a slower moving tug, for instance, I wanted to ask on which side he'd like me to overtake him. Previously, I'd need to rely on VHF and hope the other skipper is listening.

The way Cortex is configured, it makes calling these other vessels simpler. I see his vessel on my compatible integrated chartplotter, touch the icon on the Cortex handset screen, and the VHF directly contacts that vessel. (Although you can "see" the other vessel on a connected MFD, you cannot touch the icon and be instantly connected to the other vessel. You can only do this from a connected handset.) The safety benefits in a busy harbor are clear with commercial vessels all around. Before, you'd monitor your VHF and plotter, and scan the surroundings. With this kind of system, if a vessel is on a collision course with your boat, Cortex sounds an alarm. A touch on the Cortex handheld screen puts you directly in contact with the approaching vessel, assuming its DSC VHF is equipped and programmed. Of course, it's still important to scan your surroundings, but this may give you more time to do so.

In addition to the black box is the optional separate handset, available as either a wireless (H1P) or wired (H1). Both handsets connect via Wi-Fi; the wire simply supplies power either directly or to a charging cradle, depending on the handset. Up to 10 handsets, either wired or wireless, provide up to 85 dBA of crystal-clear audio. Pressing the dedicated man overboard (MOB) button activates a track-back mode on all handsets and marks the MOB waypoint on NMEA2000-connected MFDs.

Once connected to the vessel NMEA2000 network, AIS targets show up on a compatible MFD where vessel details such as speed, heading, size, and vessel type are clearly displayed. It's important to note that the Cortex can transmit at 5 watts instead of the 2 watts used by earlier Class B units. This means your vessel is less likely to be missed by other boats. It also uses SOTDMA protocol, which means, among other improvements, that it's faster, has priority over lesser protocols, and can reserve a future "slot" as your vessel and others are moving.

Cortex also has a built-in VHF radio, but to use it you'll need at least one of the dedicated handsets. These handsets look more like a smartphone than the VHF mic you may be used to. Scrolling through menus is intuitive, and most functions can be accessed via a click wheel or directly from the touchscreen. I appreciated being able to communicate with AIS targets simply by touching the icon on the screen without going through a series of steps.

Channel changing is simple and can be performed with one hand, even while wearing gloves. What takes getting used to is holding the handset in a similar way to making a call using your phone's speaker. Rather than holding the handset to your ear, you hold it in front of you, but the audio is clear, and so far, I haven't had an issue either hearing or being heard.

Price may be a barrier to some boaters, but it gets more attractive when you consider all the built-in functions and what you would pay for a VHF radio, Class B AIS, and a remote monitoring system. Regular software updates are promised and will add features such as hailer functions, automatic foghorn activation, and other enhancements. You'll be upgrading the existing unit rather than replacing it with a new model. Pricing is $1,799 for the M1 base unit and an H1 wired handset; $1,299 for the M1 base unit only; $599 for the H1P portable rechargeable handset. Visit vespermarine.com to learn more.