Our editor Mark Corke applied a running gear antifoulant to his Grand Banks and came away impressed with the results. 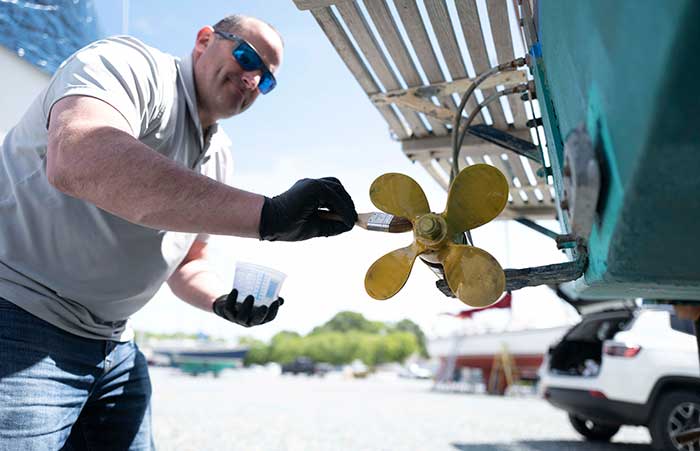 A fouled prop can cause a bunch of problems — from reduced top speed, increased fuel consumption, and unwanted vibration. When Seaglass, my Grand Banks 32, was out of the water just over a year ago for routine maintenance, it coincided with a chance to try out Propspeed, a special type of antifouling for propellers. I had seen it on other boats in the yard but had always been skeptical of the manufacturer's claims. Full disclosure: Propspeed offered, then provided, the product and application to me at no cost.

The proper application of Propspeed is critical to its performance and longevity, so I took photos while sales rep Keith Mayes showed me how it was done. Mayes explained that the key to a successful job is careful preparation. Any previous coatings and fouling must be removed and the prop abraded with 80-grit sandpaper before wiping down with solvent. Propspeed is available in a variety of quantities depending on the size and number of props that need to be coated. We used a 500-millileter (16.9 ounce) kit, which was sufficient to coat Seaglass's single 24-inch, four-bladed prop and small hydraulic stern thruster. 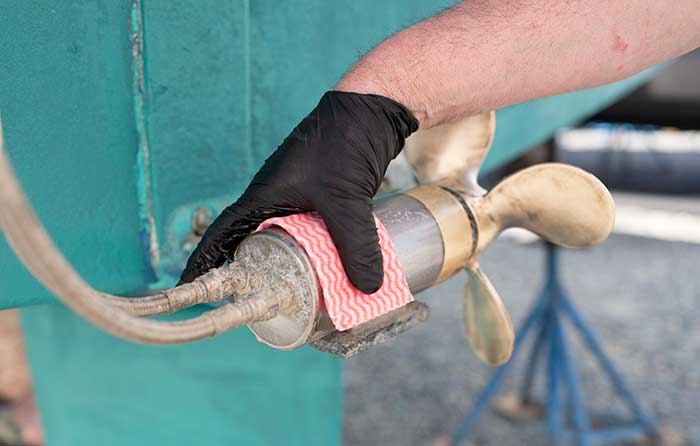 As with many projects, proper preparation is key. After thoroughly cleaning and abrading the props with sandpaper, a wipe-down with solvent is required before application. (Photo: Mark Corke)

Mayes carefully applied the coating using a foam roller and a chip brush for hard-to-reach areas. The yellow hue of the coating makes it easy to see any missed spots. Regardless, you need to work reasonably fast as there is a limited window of opportunity to apply the product before it starts to cure. This varies with temperature, so make sure you follow the instructions on the can. 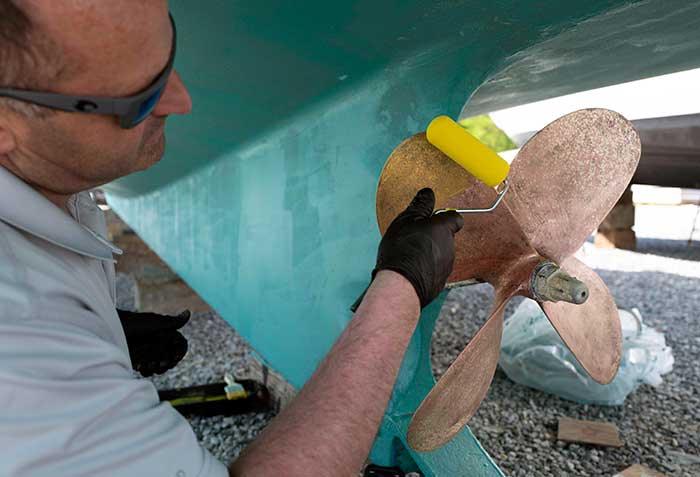 Propspeed made a video of one of their techs applying the product to a larger boat, but DIYers can pick up some helpful tips.

A couple of days later, the boat was relaunched and I was eager to see if the claims of improved speed and better fuel economy were true or just marketing hyperbole. I was more than impressed. I've run the boat enough over the years to be very familiar with its characteristics; at 1,800 rpm, the boat's speed is a consistent 8 knots. After application, running the engine at the same setting gave an increase in speed of a half-knot — impressive for a boat weighing close to 8 tons! Vibration was also noticeably decreased, but I suspect this was most likely due to cleaning off the barnacles and other marine growth before applying the coating.

Mayes told me that the coating typically lasts 12 to 18 months before reapplication is required. Because I haul my boat at the same time each year for maintenance, I was interested to see how the coating held up during the intervening year. When I pulled her out of the water for cleaning and application of bottom paint earlier this year, the prop was virtually completely clean of growth — very impressive.

So is Propspeed worth it? Overall, I think so. It is expensive at $400 for a product that only lasts a year, but there has been a noticeable increase in speed and fuel economy. By my estimates I'm using about a gallon less in fuel over an 80-mile run, and best of all no fouling of either the prop or stern thruster. I'm also a longtime sailor, so I'm acutely aware that any fouling on the prop has a profound effect on speed when under sail.