Best Day On The Water: Father And Son 'On The Run' 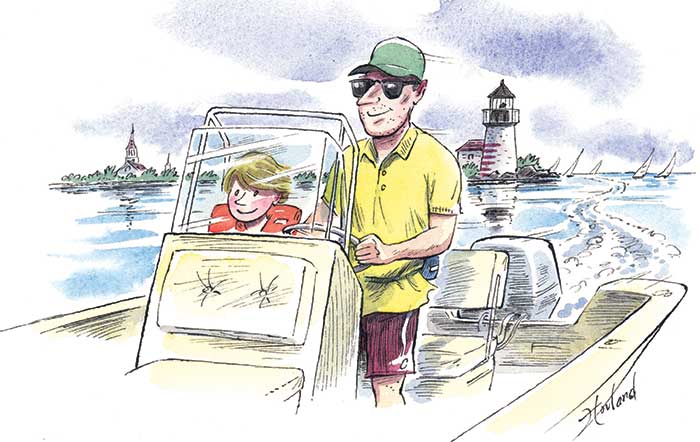 In August 1996, our oldest son, Paul, was away at camp while his 7-year-old brother, Chris, was enjoying life as a temporary only child. On a perfect millpond-like morning, Chris and I were drifting for fluke in our 19-foot Mako off the coast of Massachusetts, in the shallows between Martha's Vineyard and the Elizabeth Islands, when we were hailed on the VHF by my brother-in-law, Clay. He reported that he and his wife, Karen, had "kidnapped" my wife, Nan, and were headed to Nantucket in his sportfisherman. We reeled in the gear, snugged up our life jackets, and headed east.

Ordinarily, we wouldn't make that 32-mile run in a 19-foot center-console, but the weather was extraordinary. There were few other boats out in the Vineyard Sound to disturb the flat seas. The sky was bright and clear, and the only breeze was from our headway speed, as father and son stood behind the console grinning widely.

Clay brought us clothes for dinner as we had only the swim trunks we were wearing. Karen let Chris pick out whatever he wanted in a toy store. He chose a little plastic boat. Tied to a mooring, Clay's boat accommodated us all overnight and for eating our favorite donuts in the morning at breakfast.

Back at school, Chris wrote about "My Favorite Day Ever." I feel the same way. Over the years we've made that trip many times in larger boats, but there's something very special about big and little kids and small outboard motorboats.

Paul Alphen is a BoatUS Member.