Keeping an Eye on the Weather

Boaters should have a basic understanding of how the weather works - that can give you a valuable head start on preparation. 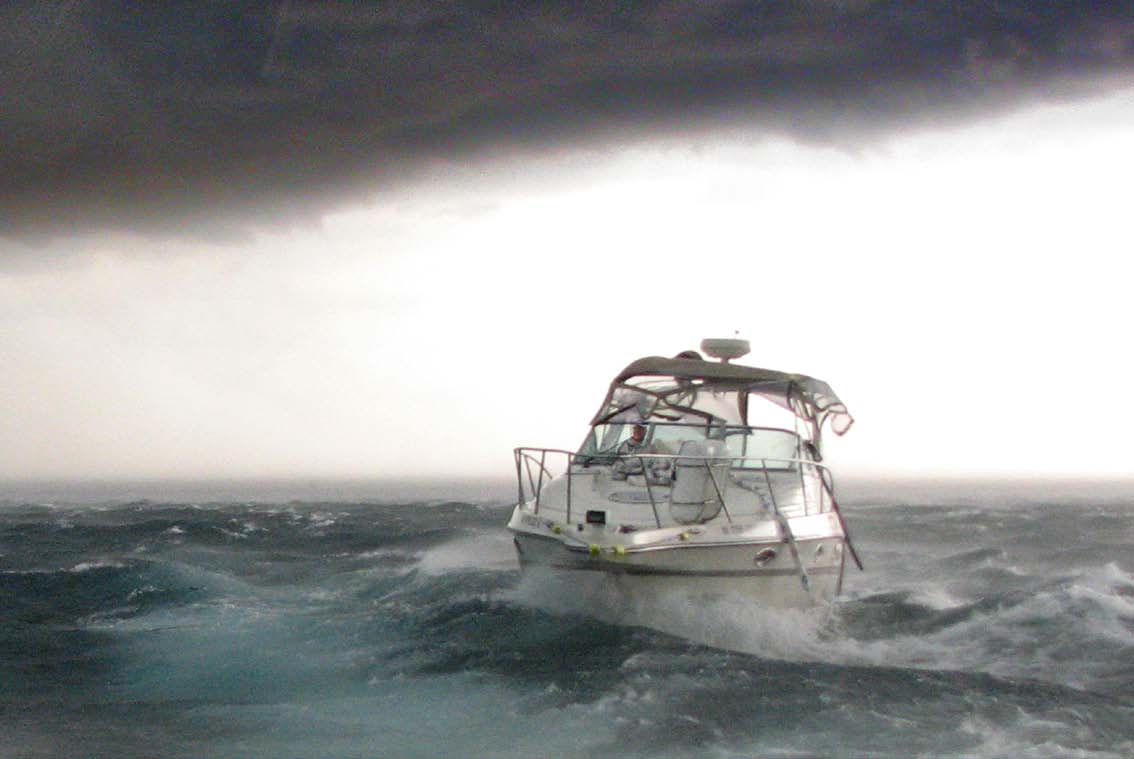 Back in the days of iron men and wooden ships, weather predictions were made with a barometer, good eyesight (a weather eye), and maybe a little intuition. Today's mariner is more likely to predict the weather by glancing down at a computer screen than up at the sky. But when clouds start building and the sky's growing dark, having at least a basic understanding of how the weather works can give you a valuable head start on preparation.

It was a typical hot and humid summer day when member Jerry Whitlock took his 27- foot sailboat out on the Intracoastal Waterway near Merritt Island, Florida. By afternoon, some ominous dark clouds began building and seemed to be heading his way quickly. Jerry lowered his sails, donned a lifejacket, and started the engine. He decided against running for cover at his marina because he didn't want to be docking single-handed during a thunderstorm. It turned out to be a wise decision.

Jerry says he felt a refreshingly cool breeze, which he learned later was being caused by water vapor drawn up to the thunderhead where it froze and then returned back to earth. Shortly after the cool air, the breeze picked up to a brisk 15 knots. In the distance, Jerry could see spray being kicked up by even more wind. In an instant, his boat, with the sails down, was knocked onto its beam ends. Jerry said he'd never been hit so hard by a gust, but what really surprised him was the duration — the "gust" didn't last for the usual few moments, but went on for nearly 40 minutes. Soon, the VHF was crackling with boaters who were caught in the storm and being blown ashore. The wind — a downburst, later estimated by meteorologists to be around 60-70 knots — quickly kicked up short steep waves. Jerry tried to keep his bow pointed into the wind and waves, knowing that if he got broadside to the wind, he'd probably lose control. Soon, there was so much spray that he could barely see and when the rain started, the drops stung like needles. Jerry grabbed a dive mask so he could peer over the dodger, but he said there was nothing to see except blowing rain and spray, and he could only hope he was still in deep water. The radio was filled with cries of panic as boats were knocked around, but no rescue vessels could be launched in the heat of the storm. When it was finally over (Jerry said it seemed like hours), he could see sailboats with shredded sails and some powerboats on the lee shore. A pontoon tour boat had been overturned but fortunately was empty except for the operator who was unharmed. Later, he heard of boaters trying to anchor in the tempest only to have anchors drag or anchor lines part. In addition to numerous boats being driven ashore and damaged, several people were injured trying to douse sails or lower anchors.

Not all thunderstorms are as intense and potentially dangerous as that one, but, as vulnerable as boaters tend to be to the weather, it pays to have some basic weather-reading skills — in addition to official forecasts — so you can be prepared.

Whole books have been written on how to predict the weather by looking at clouds, but since most people have a hard time remembering all the different types and what they signify, a simple rule of thumb is that if flat clouds get lower, or puffy clouds grow and get higher, keep an eye out for rain or a storm. Generally, the slower the clouds change, the longer the duration of the weather change. Thunderheads form quickly and dissipate quickly while slowly thickening low clouds associated with a cold front often mean a soaker. When you're looking at the sky, it's helpful to remember that most weather changes come from the west (as it did in Jerry's case), so keep your weather eye in that direction.

Most of the time, winds are light in the morning and pick up in the afternoon, then get light again as evening approaches. This is a typical wind pattern, but if you find the wind speed not following the usual local pattern, suspect a change coming. The direction of wind changes can also give you a heads-up as to what's coming. If the wind changes clockwise — say, from the south to southwest to the west — it usually means fair weather on the way. If it changes counterclockwise — say, from the west to southwest to the south — it usually signifies the approach of foul weather (remember that a wind is named for the direction from which it comes). During the formation of a quick thunderstorm, the wind doesn't usually follow that rule since it often comes straight down from the clouds and spreads out in all directions, so if you feel a sudden cool wind, check the sky for towering clouds. Something to keep in mind: When the speed of the wind increases, its effect on your boat increases exponentially. For example, a 20-knot wind has four times the force as a 10-knot wind.

Barometers are more than just pretty brass instruments that look "shippy" on a bulkhead. Knowing what they're saying can alert you to the advancing weather. Barometers are typically marked one of two ways: solely with numbers, or with areas of the face declaring "fair," "changing", and so on. The wording is misleading since reading a barometer is about noting changes. A falling barometer usually means bad weather is approaching, but it's as much the speed of the change as the change itself that's important to note. A rapid fall means bigger changes (barometers normally go through a small daily up-and-down change that should be ignored). An especially rapid rise may indicate fair weather with strong winds. Usually, checking a barometer every couple of hours is adequate.

If a thunderstorm is approaching, listening to thunder can tell you a lot about it. Counting the seconds between the flash of lightning and the boom gives you distance—five seconds equal about a mile. Comparing the times between the various flashes can tell you whether the storm is heading toward you or away. This takes some practice, as you're likely to be counting while also dashing around trying to prep your boat.

If your boat is equipped with radar, you can see the rain produced by thunderstorms. Radar can give you the range and movement of the rain, allowing you to change course to avoid the worst. Keep in mind, though, that while radar will tell you where the rain is, it won't give you any information about wind.

While using your own senses to look for signs of a weather change is a good idea, knowing the forecast before you head out is equally important. The U.S. is blessed with dozens of outlets that forecast and report the weather, most of them free of charge.

Whether you’re a BoatUS Member or not, you can download and use the BoatUS App to monitor the weather at your favorite boating destinations, including small craft advisories, weather forecasts, and customizable buoy and tide stations backed by NOAA. Authorize push notifications to automatically be notified with detailed storm information each time NOAA begins tracking a hurricane headed your way.

The most prominent weather data gatherer is the U.S. government's National Oceanic and Atmospheric Administration (NOAA). NOAA's National Weather Service (NWS) gives forecasts for all parts of the U.S. via the Internet (www.noaa.gov/wx.html) as well as regularly updated VHF broadcasts. All modern VHF radios can tune in to the forecasts, which operate on one of seven frequencies. Scan through the channels to find the best reception; the signal's computer synthesized voice can typically be heard for 25 miles or more from the transmitter. The NWS also makes their forecasts available via telephone (go to www.weather.gov/om/marine/noaatel.htm for a list of numbers). If you have a smartphone, go to: mobile.weather.gov. Something else NOAA provides is a website that lists current wind speed, wave height, and more at a nearby weather buoy. Go to: www.ndbc.noaa.gov for a look.

The online counterpart to television's The Weather Channel, weather.com has its own army of forecasters, though much of their raw data comes from NOAA. Weather.com offers several apps that can be downloaded to provide video forecasts for any area (www.weather.com/apps).

Weather Underground (www.weatherunderground.com) also gets much of its data from NOAA, but supplements it with thousands of local amateur weather stations. The site features an informative blog from founder Dr. Jeff Masters that includes details about the various weather events. For those who use Twitter, Weather Underground offers Twitter feeds with local forecasts and severe weather alerts for specified locations. This website, like others, also allows smartphone users to see animated local weather radar, which can be used to track storms.

Weather Lore and What It Means

A red sky at night is caused by light passing through dust particles in the air in front of the setting sun. Dust typically indicates dry weather and since most weather changes come from the west, a red sky at night usually indicates dry weather approaching. A red sky in the morning, however, indicates that the dry air has moved east and rain may be coming, especially if there are clouds that are illuminated. If the morning sky is a deep fiery red, it means a high water content in the atmosphere with the likelihood of rain. A gray sky at night means that the western air is filled with moisture and it will likely rain soon. One thing to remember, though, is that this rhyme can’t predict thunderstorms that develop in the afternoon when the morning has been clear.

Fog is formed when the air cools enough that the water vapor condenses. In order for the air to be cool on a summer night, the sky must be clear, so excess heat can be radiated into space. Cloudy skies act like a blanket, absorbing and reradiating the heat, keeping it in. So if it is cool enough (and clear enough) for fog to form on a summer morning, it will probably be clear later or at least by the next day. Winter fog is different. Above the ocean or a large lake, air is typically more humid than above land. When the humid air moves over cold land, it will bring fog and possibly rain.


When halo rings the moon or sun, rain’s approaching on the run.

The halo around the sun or moon is caused by ice crystals high in the sky that indicate an approaching warm front and usually predict rain within 24 hours, though this rhyme is more accurate in the summer than the winter.


The higher the clouds, the better the weather.

Marine Warnings and What They Mean