An Arizona couple trailers their Albin 25 (and camps along the way) from the arid desert to the lush beauty of the Pacific Northwest. 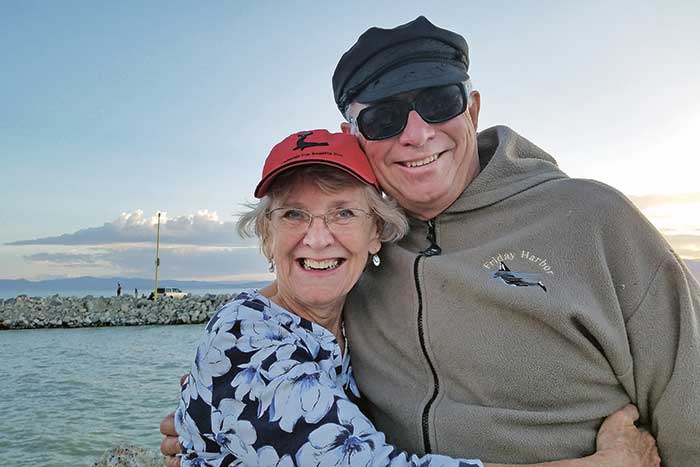 After 15 years of sailing among the coves and nooks of Lake Pleasant, just outside of Phoenix, surrounded by arid mountains and cacti, the Eshlemans decided it was time to expand their cruising grounds and change the type of boat they owned. Active sailors with their Montgomery 15 and then their Catalina 25, they felt the need to leave the 9,000-acre lake they knew so well to expand their horizons. "Because we live 360 miles from the nearest coastal area (San Diego), our choices were to either have a trailerable boat to do these sorts of travels or a larger nontrailerable boat docked hundreds of miles from home."

The Eshlemans decided that for their lifestyle, they'd rather have a boat they could trailer anywhere in the country. "This way, because we are retirees with unlimited free time, we can go anywhere our budget will allow."

Their next boat, says Steve, would have to be much easier to set up than the sailboats. "Launching and raising and lowering the mast on a sailboat gets harder as you get older," laughs Steve, who retired a few years ago from an Arizona utility company. But getting out of boating was not an option. Steve grew up on the New Jersey shore, and his family always had boats. There was no way that was going to change.

In between seasons sailing Lake Pleasant, the Eshlemans took a vacation to the Pacific Northwest. "In 2011 we chartered a Jeanneau 40 out of Bellingham, Washington, with some friends and sailed in the San Juan Islands," says Steve. Being somewhere new with lush, soaring landscapes; secluded coves; and abundant wildlife opened their eyes to the possibilities.

That was when they really started looking for a new boat, one they could still trailer, but would make launching and rigging easier. They also wanted a simple, efficient boat that didn't break the bank. In a harbinger of what was to come, the Eshleman's found what they wanted, drove all the way to a small town in Idaho, and brought back La Dolce Vita, a 1971 Swedish-built Albin 25, on an aluminum trailer. "In my opinion, for our lifestyle, 25 feet is the 'Goldilocks' size boat — small enough with 8-foot, 6-inch beam to pull with a three-quarter-ton truck without wide load permits, but large enough to be seaworthy and have sleeping, cooking, and toilet facilities." 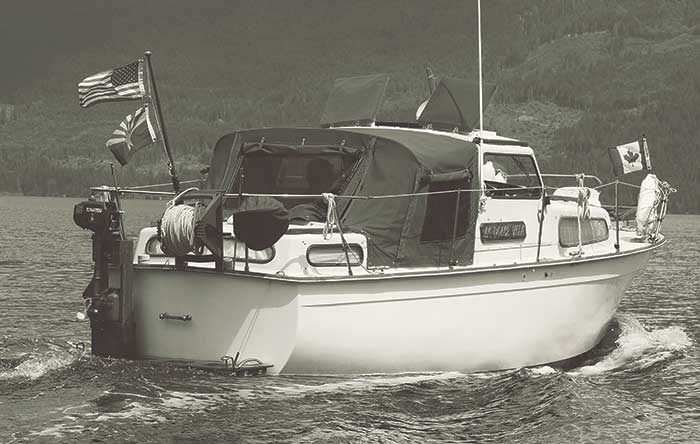 La Dolce Vita, a 1971 Albin, fits into the couple's lifestyle, which includes trailering 1,600 miles or more.

The small trawler and its trailer fit their lifestyle perfectly, says Steve. Since they bought La Dolce Vita in 2014, the Eshlemans have made the long trip to the Pacific Northwest four times, cruising the Salish Sea in and around the San Juan Islands of Washington and the southern Gulf Islands of British Columbia. "We use our boat as a camper while on the road, staying in RV parks and campgrounds, which saves us half the cost of hotel rooms," says Steve.

In 2018, The Eshleman's trip took them through the Gulf Islands and east side of Vancouver Island to Comox, crossing Georgia Strait and spending two weeks in Desolation Sound. They recently returned home from this year's Pacific Northwest cruise to the San Juans and Gulf Islands, this time going around the back side of the Saanich Peninsula near Sidney, British Columbia, to anchor in Tod Inlet on the back side of Butchart Gardens. Steve says they motored their dinghy over to Butchart's dock and landed there to tour the 55 spectacular acres of formal gardens.

Not content to cruise only the Northwest, the Eshlemans have also taken a "jaunt" to the East Coast with La Dolce Vita and cruised Rhode Island and Chesapeake Bay, something he says he can do because of the ease of trailering.

The Albin is simple, says Steve, which keeps expenses down and maintenance to a minimum.

We use our boat as a camper, ­staying in RV parks and ­campgrounds.

"We don't have powered refrigeration and so depend on a cooler and ice. We try to maximize the provisions that don't require refrigeration and get block ice for drinks and things that have to be kept cold," says Steve. For example, Steve says they stock OvaEasy freeze-dried egg powder, freeze-dried hash browns, and shelf-stored precooked bacon for breakfasts. "For milk we bring shelf-stable almond beverage cartons that don't have to be refrigerated until opened as well as various canned goods. Most places we go have grocery stores to pick up fresh meats and other things."

As for what the future holds, Steve says that they're inspired by the BoatUS Magazine article "The Allure of the Mini Loop", and they're already thinking of doing the Triangle Loop, starting and ending in Tonawonda, New York, just north of Buffalo.

"La Dolce Vita could theoretically make the whole 700-mile trip on 54 gallons of diesel!" says Steve. That adventure would entail trailering the boat 2,200 miles to launch, but Steve's not fazed. "It's not that much farther than our usual launch ramp!"