Outboards seem to be getting larger and stronger by the day. Take a deep dive into the latest trends and technology. 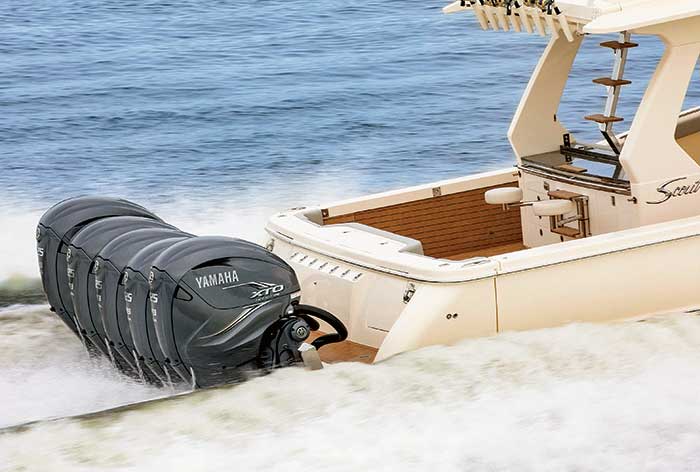 It's a sight that can inspire equal measures of awe and reproach: multiple outboard engines, each bigger than a full-grown man, lined up along the transom of an obscenely colossal center-console fishing boat. The spectacle tempts and allures while also screaming of excess. Our brains tell us that loading all this horsepower onto an open boat can't possibly make sense and won't serve any purpose beyond trying to impress the slip neighbors. Yet it's become a common display at boat shows and marinas all across the country. And looks can be deceiving — or so we've been told.

There's been a spate of these overgrown V8 outboard engines hitting the market. The most powerful on the face of the planet is the latest from Seven Marine, its 627sv, which, like the company's other models, utilizes a marinized supercharged and intercooled GM LSA Gen4 6.2 liter V8 block that was developed for the Cadillac CTS-V. More recent introductions include Yamaha's F425 XTO, and Mercury Marine's 200 to 300 FourStroke, Pro XS, and SeaPro models. In all, we've gone from having two V8 outboard blocks and three different models on the market to four blocks and 16 models in just two years.

Why such a rapid expansion? There are multiple reasons, all being driven by a marketplace niche focused on extremely large center-console yachts of 40, 50, and even 60-plus feet. While a 35-foot outboard boat was once considered big, today it seems the sky's the limit. These oversized outboard boats have been growing in popularity, and they not only need gobs of power to perform at the level modern powerboaters expect, they also need to have more torque and swing larger propellers to move their shockingly heavy loads. Once upon a time, moving weights of 5, 10, or even 20 tons meant shifting to diesel power plants. But the people buying center-consoles of this new genre have lived with and become accustomed to modern four-stroke outboards, which have evolved to be incredibly reliable, efficient, and quiet. They don't want to give them up. 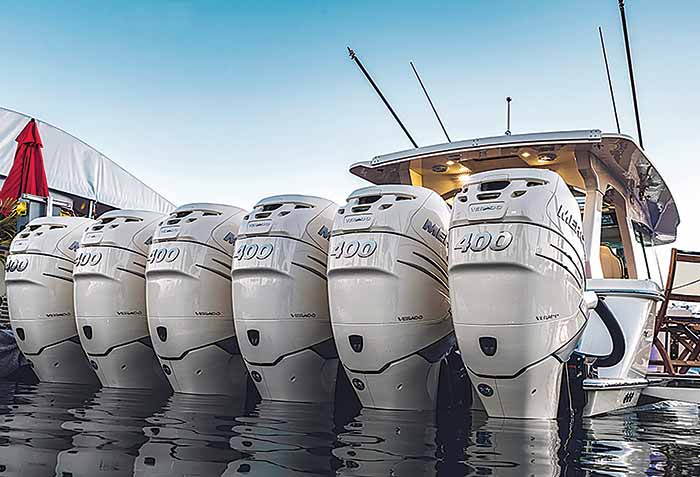 At the same time, technological advances have allowed manufacturers to improve efficiency and wring every iota of performance possible out of an outboard's displacement. The 627sv, for example, may attain its chart-topping horsepower rating via the supercharger, but it also incorporates modified cylinder heads that create additional turbulence in the combustion chambers, and Inconel exhaust valves that can withstand higher temperatures and allow for a leaner burn. The Yamaha F425 is the first outboard four-stroke to incorporate DFI (see "Some Technical Terms" below for an explanation of the technology) and hits 2,900 psi at the injector to atomize fuel entering the combustion chamber and improve efficiency while lowering exhaust emissions. And Mercury's new V8 utilizes transient spark calibration, Mercury's proprietary fuel delivery calibration, and closed-loop fuel control to maximize torque and efficiency.

DFI: Direct fuel injection is very similar to EFI (electronic fuel injection), but rather than injecting the fuel into a port, it's injected directly into the combustion chambers. DFI utilizes much higher pressure and requires additional pumps and more complexity, however, it also delivers the most precise blast of atomized fuel possible, resulting in more power and a cleaner burn.

Inconel: Inconel is a mostly nickel alloy, with chromium, iron, and several other trace metals present depending on its exact composition. It's primarily used in high-heat applications as it's extremely resistant to heat and oxidation.

Supercharger: Superchargers are essentially air pumps that compress air as it enters the engine, raising the density and oxygen levels available for combustion. This boosts the engine's power output, often by as much as 30% to 50%.

Transient spark calibration: Systems with this ability adjust their spark plug timing during acceleration, which improves low-end torque (to the tune of 5% to 7%, according to Mercury), and speeding up the hole-shot.

What about weight? In this regard, we haven't seen any breathtaking technological leaps, and these outboards are just as heavy as one might fear. In fact, several of the new V8s hover around or exceed the 1,000-pound mark. But note that these engines maintain a respectable horsepower-to-weight ratio. The Yamaha F425's ratio of 0.44 is about the same as it is for an F250 V6, one of the most popular outboards of its size on the face of the planet. And the 627sv manages an eyebrow-raising 0.57, one of the top power-to-weight ratios on the outboard market today.

While the size and weight of these power plants might have seemed overpowering on boats that dominated the market a few years ago, remember that these engines are going on much larger transoms. As a proportion of boat weight, dropping 3,000 or even 4,000 pounds on a 40-footer is not at all out of line.

"Most of the materials we build with remain the same," says Grady-White Vice President of Engineering David Neese. "We may add additional materials for strength, but the larger nature of the boats designed for multiple V8s helps compensate for the weight difference between them and V6 outboards. It does take planning, however, because there are three critical things to take into account: local factors at the transom such as torque, global factors affecting the entire boat such as impact loads, and making sure we get the center of gravity right."

Read this article to learn more about the latest technology in boat motors.

Hard-core anglers ­favor the Mercury
XS Pro 300V8 for its power to blast out
of the hole and get on plane quickly.

So, just how does this new genre of center-console yacht perform with multiple monster V8s on their oversized transoms? A full day fishing on the Grady-White Canyon 456 rigged with quadruple F425s proves illuminating. First off, we'll note that riding on and driving the boat feels no different than being on any other outboard-powered boat with modern four-strokes at the transom. It's bigger, sure, but when you crank the wheel over, the boat responds more or less just like a 20-something outboard boat with twins.

To owners of smaller, more traditional twin-engine outboard boats, which might get 2 or 3 mpg at a reasonable cruise, this may seem like rather atrocious efficiency. (And let's not even ask sailors what they think of it). But put these numbers into perspective. Compare them to other 45-foot fishing boats and a bigger picture unfolds. A 45-foot twin diesel inboard sportfisher with twin 800-hp inboards, a similar amount of horsepower, can be expected to run at around 30 mph while burning approximately 50 gph, for 0.6 mpg. The same size boat with 600-hp diesels might hit an efficiency peak at closer to 0.75 or 0.8 mpg, but will be cruising at under 30 mph and will be hard pressed to hit 40 mph at full throttle — while the Canyon 456 tops out at almost 60 mph.

As it turns out, running the monster center-console yacht with V8 outboards nets an efficiency that's about the same as running a twin inboard diesel sportfisher of comparable length. But in addition, you get a serious performance edge. And what happens if you put a single F425 on the transom of a 20-something boat that might otherwise run with twins? Best cruise is over 3.0 mpg, competitive with the pair of smaller motors.

As it turns out, running the monster center-console yacht with V8 outboards nets an efficiency that's about the same as running a twin inboard diesel sportfisher of comparable length.

We're certainly not about to assert that these huge V8s are exactly what one would call "efficient." Truth be told, no planing powerboat of this size, regardless of what power system it runs on, is going to help you maintain a small carbon footprint. Nor is the initial cost and the resulting maintenance of triple or quadruple V8 outboards very appealing to the average boater. But when it comes to big boats, there's no way around one simple reality: You've got to pay to play. The V8s offer efficiency similar to more traditional options, and they offer higher cruising and top-end speeds. They also get you perks like joystick steering and virtual anchoring.

And as for impressing your slip-neighbors ... well, you know.