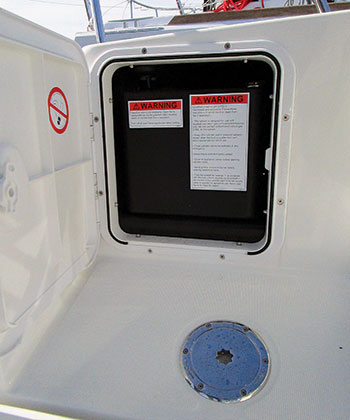 If you didn't know any better, you might be forgiven for thinking that this propane locker was a model of design elegance. It has a door to make slipping in a cylinder a piece of cake, but this is a case of form over function. Although stylish, this propane locker in the cockpit of a large sailboat from a well-known French builder contravenes both American Boat & Yacht Council (ABYC) and U.S. Coast Guard rules.

Propane is the most popular fuel for cooking stoves by far on recreational boats of all sizes. While it's a convenient energy source, it can be dangerous. Propane is heavier than air and will sink to the bilge of the boat if allowed to enter the cabin where, given the right conditions, it could cause an explosion without warning.

Propane must be stored in a dedicated locker that only opens from the top. It should drain any leaking gas to atmosphere and must not allow any escape of gas to find its way into the interior of the boat. The gas locker shown here has neither the top opening requirement nor a dedicated drain. Any accumulation of spilled gas is effectively "stored" in the locker, which once opened is free to escape and fall through the adjacent companionway into the bilge.

BoatUS recommends the use of gas sniffers (with an automatic propane shutoff valve) as an early warning device on any boats where gas is used and stored aboard. These are great; as soon as the sniffer picks up the smell of propane at your galley stove or wherever, it shuts off the propane at the tank. 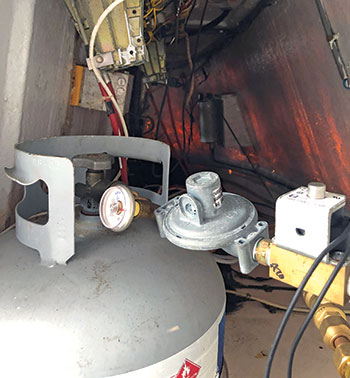 In this December 2018 article, we talked about how to safely install propane tanks. This "installation," sent to us by New Jersey marine surveyor Bruce DeGraw, shows the exact opposite of how to mount a propane tank. It's installed in the helm console on the flybridge. Propane tanks must be contained in an approved storage locker. Any locker must be above the normal level waterline of the boat (which is about the only thing this installation has going for it), and it should drain any leaking gas as noted in "More propane problems" above. The gas locker should be used for the sole purpose of storing gas cylinders and no other equipment. Nothing about where this tank is located is safe, and it's probably no surprise that the rest of the system is flawed as well.

It's Just A Hose 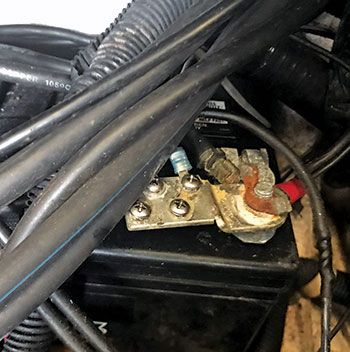 This battery is in a crowded locker with all kinds of wires and hoses going here and there. The metal plate with four screws on the right is designed to keep the negative post from having too many attached wires — a good idea. That's about where the good ideas end though. Those nice black hoses? They carry gasoline. Let that sink in for a minute. The metal plate will eventually chafe through with the motion of the boat and spill gas on top of the terminals, and all over the battery and into the bilge, where explosive fumes will collect. One tiny spark will set it off, and from the looks of the battery, the rest of the boat is probably not up to standards either, which means it's even more likely that something will spark. One more thing: Wing nuts should not be used on a battery post. They routinely loosen, and a loose connection can easily spark. 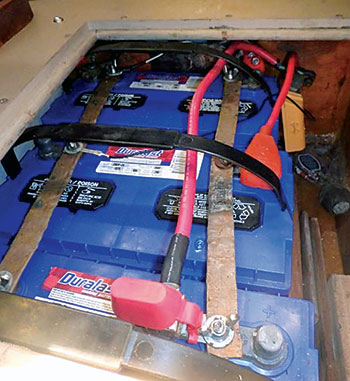 Batteries contain a lot of energy. Anyone who's ever dropped a wrench across the positive and negative terminals on one can testify how impressive the sparks are. A metal tool can start melting in seconds. That's why ABYC standards require that the "hot" positive terminals be covered so nothing can contact them. This battery installation has three large batteries in series, multiplying the potential wrench-melting power. The installer correctly covered the positive terminals but added a metal strip to electrically connect the batteries, which in essence is one long (unprotected) terminal, negating the proper red covers. Anything metal that comes into contact with the positive terminal (e.g., tools, anchors) and the nearby negative terminal strip (or any other ground) will cause an instant, potentially catastrophic, eye-searing arc that will melt metal, shower sparks, and maybe explode the batteries. Finally, the terminals are held down with wingnuts, which, as explained previously, can come loose. Only properly sized nuts should be used. 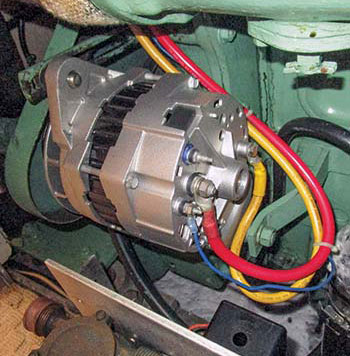 The owner of this large sailboat replaced the alternator when the original packed up. At first glance all looks well, except that the positive terminal — the one with the red cable connected to it — should be protected with an insulating boot to prevent short circuits that could result in a fire. ABYC guidelines specifically address the issue of shielding and insulation, and the standards require that the positive terminal must have a boot. It's the same thing as having an exposed battery terminal, except tools in the engine room are even more likely to find the hot terminal and a ground, with the resulting fireworks or melted screwdriver (or a fire).