NOAA is testing the use of Unmanned Surface Vehicles to monitor fish stocks with an eye on sustainability. 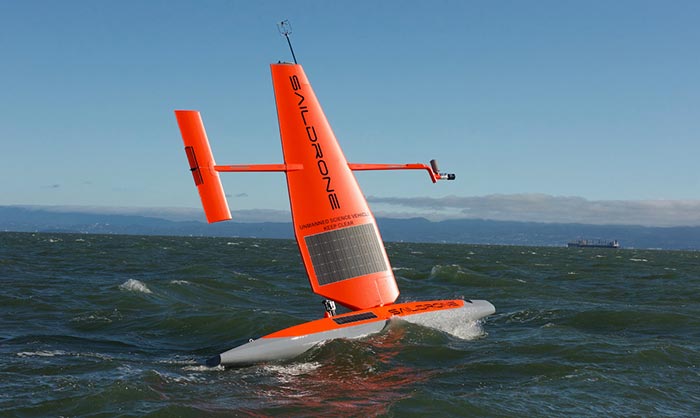 West Coast boaters may soon see an odd sight on the water — sailing drones. The National Oceanic and Atmospheric Administration (NOAA) is testing the use of Unmanned Surface Vehicles (USVs), also called saildrones, to measure fish data. The data are used to monitor fish stocks so NOAA can make decisions on how to best sustain fisheries.

NOAA typically uses large ships to perform the tasks, but the experimental saildrones are designed to do the job for a tenth of the cost. They can also operate in much shallower water (as little as 10 feet) and, unlike their flying counterpart that have limited flight time, these drones can operate independently for up to a year.

The first tests were done last summer off the coast of Neah Bay in Washington, and near San Francisco. For now, the saildrones are being used as a supplement to data captured by the ships, but the hope is they can be accurate enough to take over much of the work. The sail- and solar-powered vessels can't follow the usual paths the large ships take, so some of the research will have to be modified. Typically, ships navigate along a straight line, back and forth along the coast, while the saildrones take a more zigzag course and are far more wind-dependent. They can be equipped with a vast array of scientific data-gathering sensors including an echo sounder for fish counting, and then beam back the data via satellite.

The bright orange vessels are about 20 feet long and sail along at 3 to 5 knots. According to the manufacturer, the drones are robust enough to be used in the Bering Sea, which is known for heavy weather, and one drone travelled 7,000 nautical miles in 120 days in the Southern Pacific Ocean. For NOAA's purposes, saildrones will sail from 200 feet to as much as a mile from shore as they gather data.