Three BoatUS members share inspiring makeover stories of how they turned their boats from mundane to magnificent.

For the last 35 years I've been building and restoring boats, initially as a professional but now, in later years, as an amateur. My projects range from building Hustler speedboats back in the 1990s to restoring theft- and storm-damaged boats. My dad got me interested in boatbuilding back in the 1970s when he bought a 20-foot Gil Smith catboat. The hours and days we spent together keeping that boat floating lit a spark that still burns within me. 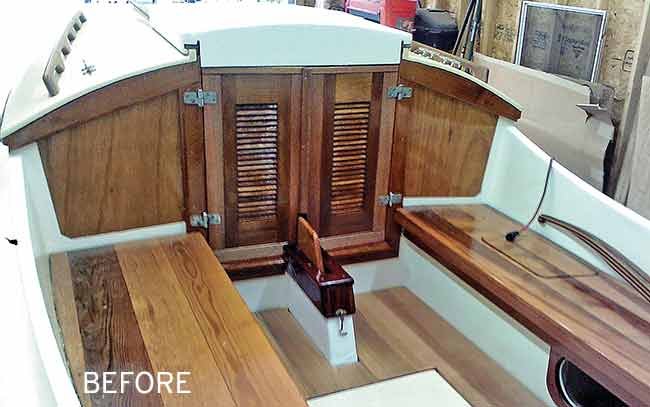 Fast forward to 2013. I was feeling that something was missing in my life. Not wanting to get in over my head, I found a 12-foot Beetle catboat that needed some love. This got me back on the water, but it was just too small for Dad and me. I needed something larger.

Online searches brought up an interesting boat, an unfinished hull that was in need of a home and a friend: an 18-foot Herman catboat designed by Charles Whitzhull. She was scratch-built from plans supplied by the Wooden Boat Store. She is cold-molded with three layers of veneers sheathed with fiberglass cloth and epoxy. A guy in Kansas, who sadly passed away when the boat was only half complete, started the building of Cathern. After his passing, the hull sat for a while and the elements took their toll. While the hull was intact, the cockpit wasn't and required some serious rebuilding. I worked out a deal with the owner's widow and had the boat shipped east to my shop in New York. 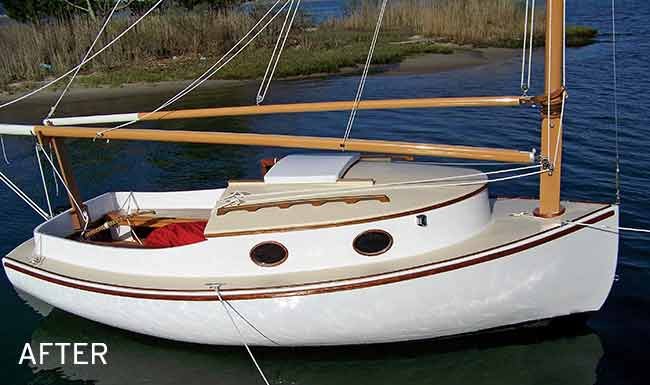 Once in the workshop, I spent a year getting the boat ready for the water. I completely rebuilt the cockpit. There also was no interior to the cabin, so that was designed and constructed as well. I was able to source some secondhand spars from a boatyard that had a mast and boom almost the exact size needed. I'm a strong believer in recycling, so all of Cathern's deck hardware, except for her navigation lights, was recycled from damaged boats. Even her sail was a secondhand salvage. Cathern has proven to be a comfortable, family-friendly boat. It's been a great project and a craft that I think I'm going to hang on to for a while. Best of all, it's given me another reason to spend quality time with my dad.

My aluminum Starchief was built and delivered in 1964 and, for the first few years, served as a family boat at a summer cottage on Indian River, Delaware. A few years later, we sold the cottage and brought the Starchief back to Virginia where it was used for a few fishing trips a year on the Potomac River and Lake Anna. Then, with other activities vying for my time, I put the boat in a machinery shed on my farm. The boat sat there for many years, though I looked at her often with good intentions of pulling her out, cleaning her up, and getting back on the water. 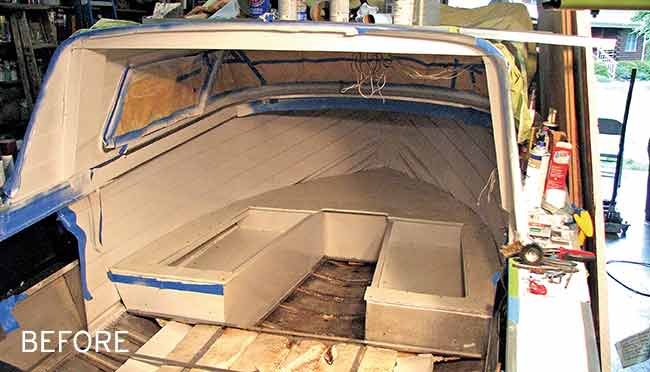 In 2008, in between work contracts, I transferred the boat onto a new trailer, as the original one had long since deteriorated. I had the 1965, 4-cylinder, 65-hp Mercury outboard motor surveyed; it was just too far gone from saltwater corrosion to be of use. I searched for more than a month for a period outboard, but in the end opted for a new Honda.

I had the hull sandblasted, and I painted the topsides with white two-part epoxy paint. This smartened up the boat considerably. It was during this work that we discovered some rot in the wood transom, which was addressed with epoxy resin. Thankfully, a localized repair was all that was required rather than a complete replacement. I stripped off the upper deck hardware, then stripped the paint from the deck. After some prep work, the deck was, like the hull, also painted with the two-part paint.

When I stripped out the interior, I found that the sole had some soft spots and needed replacing. Removing the existing sole, I found a whole new world of mice condominiums in the Styrofoam that dated back many years.

Trying to find marine plywood was a challenge. Sign shops became good sources for small scrap sizes, and they gave me leads on sources for 4-by-8 sheets. I used the old sole as a template for the replacement. Even disregarding the rot in the sole, I wanted to strengthen the replacement, so I used aluminum angles that I fitted in between the ends of the hull ribs. With these additional supports added, the sole felt very solid underfoot. 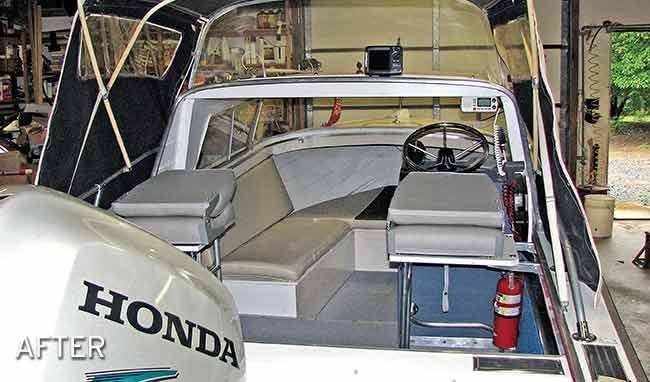 Finally, new marine vinyl flooring was laid on top of the plywood before reinstalling the reconditioned helm console. I decided not to put the port console back in to leave more open cabin access. Since the boat is more than 50 years old, I thought that she deserved a worthy name. I christened her after my mother, Mary Emily Dinterman Starkweather: The Mary E.

Last April, we were faced with the possibility of our son, Tom, having cancer. It was the third time in his young 21-year-old life that he had heard that kind of news, but this time the prognosis was different and more troubling. I thought, if we're battling cancer, we're going to need a distraction. So what better than a little boat renovation that we could work on together to take our minds off all the scary stuff? 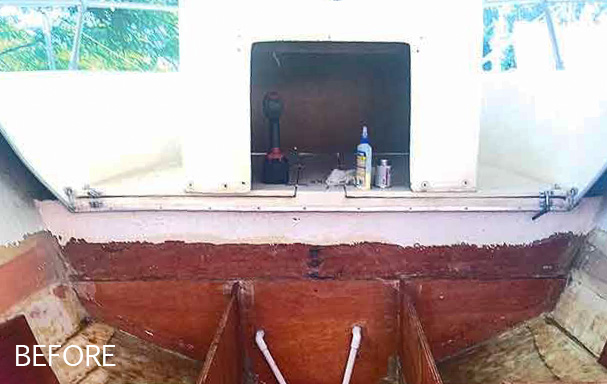 It just so happened that my neighbor had a boat that had been sitting unmoved in his driveway since 1991, a 1986 Invader 21-foot center-console with a 150-hp Mercury outboard. I bought the boat thinking that I just needed to replace the sole and would have the boat on the water in a few weeks. How wrong I was! It was only after removing the tuna tower and sole that I saw the extent of damage. Years of water sitting in the boat had disastrous consequences on the structure. I ended up removing all the stringers, foam, and bulkheads until only the outer hull shell remained. I had a 21-foot canoe sitting on my driveway!

Little by little I rebuilt all those components and refiberglassed everything into the hull, followed by a repaint. More than a year from my initial start date, I had a completely rebuilt boat replete with new motor. 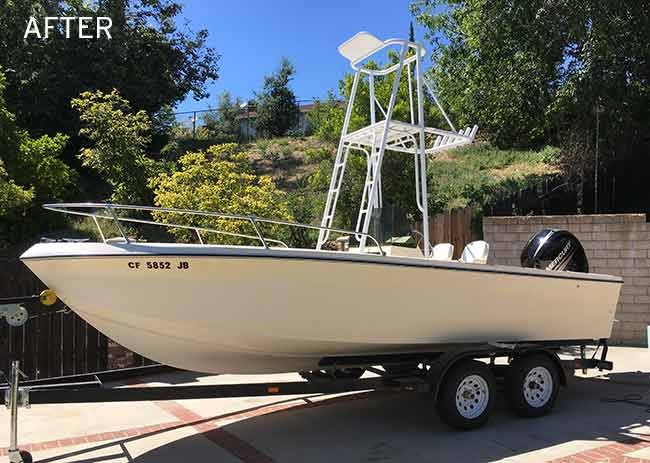 This story has two happy endings. Not only do we now have a boat, but it also turned out that my son didn't have cancer. We got to enjoy some father-and-son bonding time while we worked on the boat, so that was a win-win. Since we've had the boat, which we have yet to name, we've enjoyed day trips out to Catalina Island, and we recently towed it to Lake Havasu in Arizona for an inland boating experience.

how to diy makeovers and refitting