These systems, which vary in form and price point, can stop boat thieves in their tracks.

Top-tier systems from GOST can support up to 64 different monitors and sensors.

According to the National Insurance Crime Bureau, there were more than 5,000 boat thefts in 2015, with Florida accounting for an outsized percent of the action. The boats stolen ranged from PWCs to cruisers, and unfortunately, most were not recovered. But there's a bit of good news: You can fight back, thanks to modern technology. All you need is the right boat-theft prevention system.

Thanks in no small part to smartphones and apps, constantly monitoring your boat's security is a piece of cake today. Many different systems (we'll look at them in detail in a moment) communicate with you directly via cell, Wi-Fi, or satellite signal. They can send you an alert — as well as sound an alarm — if a sensor is triggered or if your boat leaves a predetermined "geofenced" area. Some even allow you to respond directly. You can use the app to turn on an accessory, like a strobe light or audible alarm, or flip the battery switch off. Or maybe you just want to watch the criminals as you contact the authorities; some systems will let you remotely view video taken by an onboard camera, right on your phone.

True, the more advanced systems can cost several thousand dollars and may require monthly subscription fees. But theft prevention isn't their only benefit. You'll also be able to monitor critical systems such as bilge pumps, battery levels, and high-water alarms. You might want to remotely turn on the air conditioning a few hours before arriving at the dock, or turn off those cabin lights you accidentally left on. With even the most basic and inexpensive tracking systems, if you let your kids or a friend take out the boat, you'll always know exactly where they are.

If you want the complete package that includes monitoring, alerts, and remote functionality, you can choose from several players. GOST (Global Ocean Security Technologies) offers some of the most comprehensive systems around. Its premier packages begin with the Phantom, a key fob-controlled head unit that can handle a whopping 64 sensors and communicates remotely via a 3G quad-band GPRS/GSM mobile data module (cellular service). It can cover two distinct zones, allowing large-yacht owners to separate between crew's quarters and owner's areas; it includes direct two-way voice communication capability and enjoys remote firmware updates via cellular. GOST's NT-Evolution includes much of the same potential; however, it uses Inmarsat for satellite communication, which means it will work pretty much anywhere in the world.

GOST offers intruder repellents, including an acoustic barrier. Cloak can fill the boat's interior with a dense glycol-based fog.

As far as sensors go, if you can imagine it, GOST probably offers it. Door and window contacts, wireless motion detectors, smoke detectors, temperature sensors, pressure sensors, water sensors, low-voltage sensors — even infrared beam alarms are on the list. If that's not tricked-out enough for you, you can get an acoustic barrier that emits 125-dBA of "intolerable" sound, which GOST says causes an intruder to, ahem, "enter into flight mode." Or, add in GOST Watch HD and remotely access, control (pan, zoom, tilt), and stream video from your FLIR M-series infrared night-vision camera to your phone.

"The problem with the majority of the systems out there is that no one even knows the boat is stolen until the thieves already have it and are underway," says Jay Keenan, president and CEO of GOST. "We really try now to push 'prevent the event.' We design systems for vessels that will go off with sirens blaring, strobes and/or deck lights flashing, and all hell breaking loose, so the only thing required is to wipe off the dirty footprints from where the would-be thief stood."

The downside to all of this tech is exactly what you expect: cost. Though the price of each system will vary depending on how many monitors and functions you require, the Phantom costs a little over $3,000 before you begin adding sensors, cameras, and added functionality, and the numbers will add up quickly. 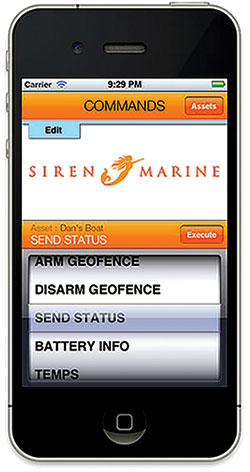 You can send text commands to your boat
via the Siren Marine app.

Siren Marine will be of interest to a larger number of boaters, with its scaled-down capabilities and similarly scaled-down pricetag (which starts at $500 for the base system plus sensors ranging from $9 to $218, and $18/month subscription fees). The basics are covered including items like motion sensors, door contacts, and canvas snap-cover sensors. Remote communications are provided with GSM cellular and SMS text commands sent via Siren's free app. Though the Siren is limited to just two customizable outputs, it can be used to remotely control systems such as lights or air conditioning via text message.

While it doesn't allow for remote control of the boat's systems, Eye On Board is another established player in the market that offers an extensive line of sensors and cameras, which can be tilted and panned via Eye On Board's site. It can communicate through a wide range of methods, including cellular, Wi-Fi, or satellite. Base systems start at $1,379, and sensors range from $19.99 for a bilge float switch to $229 for a wireless shore-power sensor, so an extensive security and monitoring system can reach several thousand dollars. There's also a flat $300 yearly monitoring service fee, but the first year is included at no charge.

Eye On Board can also be set up as a zoned system, and an interesting feature most of these systems don't provide is environmental monitoring. Interior temperature and humidity, water temperature, and wind speed, for example, can all be viewed on Eye On Board's website. MyBoatStatus is an option with some models that can connect via Wi-Fi, which makes it a cost-saver if you keep your boat in a marina that offers a reliable link (an ethernet gateway costs $269, and the basic monitoring subscription is $59 per year). All of its sensors are wireless, making for an option that's not only inexpensive but also offers easy DIY installation.

A newer option that came onto the market in 2014 is Boat Command. It uses cellular to provide the link, interfaces with an app, and offers multiple sensors. The hardware is relatively inexpensive ($299 for the device and $29.95 to $49.95 for sensors and control relays) and has a reasonable $8.99/month subscription fee. The number of sensors is on the limited side (door, motion, temperature, and shore power are available), but you can tap into the wiring of 12-volt items like high-water alarms to monitor them, and control relays are also available. This makes Boat Command one of the least-expensive options that includes remote-control abilities. 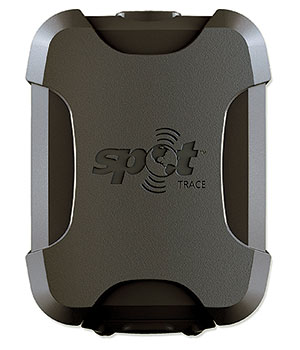 Small, inexpensive, and as simple as it gets, the
Spot Trace will be a good option for small-boat
owners.

For many boaters, these extensive — and expensive — solutions aren't needed. A more affordable option is installing a simple tracking device, which may also include geofencing and/or very basic monitoring functionality. These units can be amazingly affordable. The Spot Trace, for example, is a $119 2.6-inch by 2-inch unit ($9.99 per month subscription fee) that sends you a text or email with your boat's GPS coordinates when it starts moving. You can track the movement on Google Maps, and because its communications are satellite-based, it works virtually anywhere on the planet. The unit is IPX7 waterproof and vibration-rated to SAE J1455. However, a potential weakness of the standard-issue unit is that it runs on AAA batteries. That can get you a couple months of coverage but would undoubtedly lead to dead batteries when you most need the unit, so we'd suggest purchasing and installing the $39 power cable and wiring it into the boat's systems.

Another option is the Yacht Watchman Sentinel Point. Designed to work with outboard or sterndrive powered boats, this unit texts you via GSM when moved across its geofence, if the battery goes dead, or if your outboard is disconnected from the battery. It will be particularly attractive to those owning outboards, which thieves occasionally try to remove from the boat.

GOST offers a tracker as well, in the form of the Nav-Tracker 1.0. Though it's more expensive than these other options, at about $1,000, it's satellite-based so it works virtually anywhere in the world and can let you know where your boat is every five minutes. The Nav-Tracker 1.0 is designed to be mounted in a hidden, inaccessible area (and can broadcast through fiberglass), so thieves don't spot and disarm or remove it.

It's an unfortunate reality that there are boat thieves out there who could be eyeballing Mom's Mink at this very moment. Your boat is a valuable asset. Protect it with one of these ­systems and you vastly improve the chances that it won't become one of those sad statistics.