Your Boat's On Fire, Now What?

An onboard fire is one of the most feared events in the annals of the sea. What you do about it in the first few seconds will likely determine the outcome. 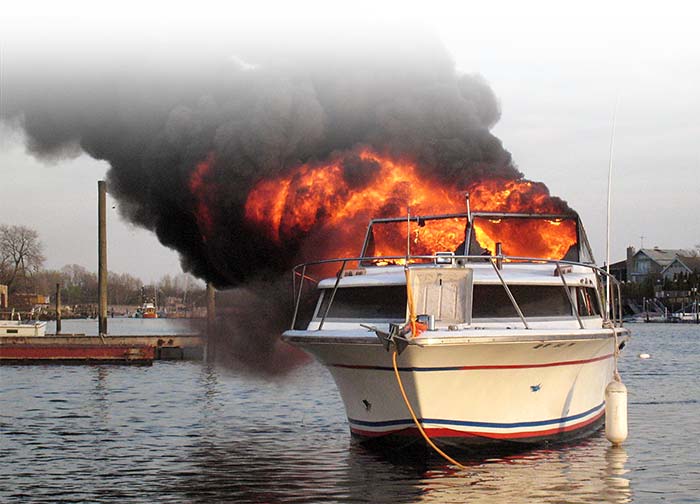 As with any fire that threatens people or property, the time between ignition and detection is critical. Fiberglass burns ferociously, and wood, particularly dry, resin-soaked wood, burns quickly. In engine spaces, spraying fuel, whether diesel or gas, creates an inferno. Fumes quickly fill spaces below decks, making them inaccessible, and deadly. The key is knowing as soon as possible that something's burning. If you can take effective action in the first few seconds, you may be able to arrest the fire while it's still contained. Installing smoke alarms in boats with cabins and enclosed engine spaces is a good first line of defense, especially if anyone sleeps aboard. Other marine-grade smoke and heat alarms have remotes that can alert an operator at the helm, saving critical seconds in the event of a fire (see sidebar).

The ABCs Of Fire

As with all battles, you have to learn about your enemy before you can fight them safely and effectively. The type of material that's burning classifies fires. Class A fires are fueled by combustible, solid materials such as wood, paper, cloth, and plastics. Class B fires involve flammable liquids and gasses (gasoline, diesel, varnishes, etc.), while Class C fires are powered by energized electrical circuits or equipment. Think of Class A fires as solids, Class B fires as liquids, and Class C fires as electrical.

Choosing to have a smoke alarm on your boat is a good idea, giving you precious early warning that you have a fire aboard, or perhaps warning your neighbor in the next slip if your boat is unattended at the marina. However, it's important to know that there are no UL-Marine approved devices on the market. Until the American Boat & Yacht Council requires them, which it's working on now (see "New Safety Guideline From ABYC"), manufacturers are reluctant to invest in the expensive certifications required to make them.

In the meantime, smoke alarms from the RV industry are a good second choice. Those made for the rugged RV market meet many of the future marine standards, and are more robust than the residential units found in stores, which are not designed to withstand the marine environment. (If you use a residential unit, it's important to test it monthly, check it for corrosion, and replace it every couple of years.)

Install alarms in sleeping and cooking areas as well as in engine rooms. Note that while smoke alarms have gotten much better at reducing false alarms, burning the toast will still set them off. Xintex makes a range of devices for detecting fires, including remote alarms that can notify the helmsman of a fire in engine spaces.

Portable fire extinguishers should
be inspected regularly for problems
such as corrosion, loss of pressure
and damaged mounting brackets.
(Photo: Jack Schachner)

Be sure you have the correct number of USCG-approved extinguishers on board, and more is always better. They should be within quick reach and conspicuous. Portable extinguishers should be located near the galley, the engine compartment, and all living spaces. As a marine surveyor, I often see that boats have enough extinguishers, but they are not located in strategic places, for instance all belowdecks where a galley fire could prevent access from the helm. Mount an additional unit at the helm or in the cockpit where it's available to the vessel's operator the second a fire is discovered.

The portable dry chemical extinguishers so popular with boaters (due to both their effectiveness and relatively cheap cost) should be considered disposable; I recommend replacing them every six years. Check your extinguisher's gauge monthly to verify that your extinguisher is still full. Put old units to good use by allowing family and crew to practice putting out a fake fire ashore. Everyone on board should know how to safely use a fire extinguisher before the need arises.

Many fires start in the engine room, typically from electrical malfunctions, followed by fuel leaks, and overheating. The galley is another likely spot (due to cooking mishaps and the like), although to a lesser extent than is popularly thought. Develop a fire action plan, and share it with your crew.

When planning emergency action items and escape routes, physically walk through them to confirm they actually work. If your evening meal goes up in smoke, can you reach the remote solenoid shutoff for the stove LPG system without having to reach over the flames? Is that forward cabin hatch actually large enough to fit through in the event of a fire? Can it be opened with the dinghy stored on deck? These are the type of questions you want to ask before staking your life on the answer.

Review your boat's fire safety plan with guests prior to getting underway, and hold fire drills regularly to ensure everyone knows what to do in the event of an emergency. Post simple instructions and provide training on operation of VHF radios and how to determine vessel location (reading coordinates from a chartplotter, for example). Explain how to use your fire extinguishers.

In An Emergency, Remember "PASS"

2. A: AIM the extinguisher at the base of the fire.

4. S: SWEEP the hose from side to side while discharging.

If You Face A Fire

Depending on its size, if a fire occurs while in a marina, it may be best to evacuate the boat, dial 911, and let professional firefighters handle it. Remember, fire extinguishers are small, quick fixes. If you can't put out the fire with one extinguisher (two at the most), get out. 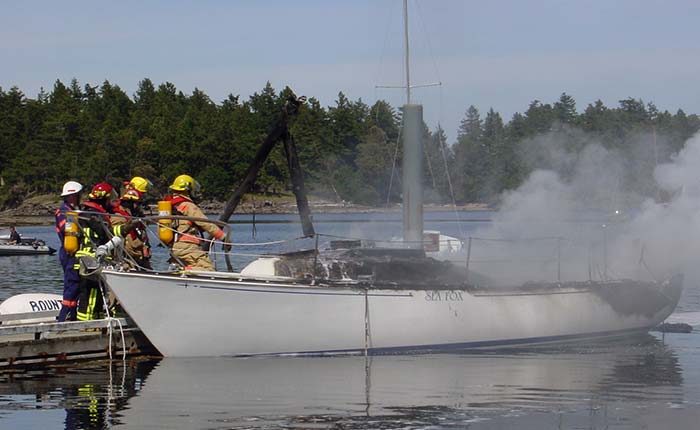 Develop a fire-safety plan and make sure everyone on board knows what to do in the event of a fire.

For fires away from the dock, you'll have to be more self-reliant, as evacuation will be more difficult and assistance likely longer in coming. Your response when dealing with an onboard fire while anchored or underway will ultimately be determined by existing conditions (type of fire, location, etc.). However, in general, one of the first steps should be notifying the Coast Guard utilizing VHF Channel 16. Letting someone know you're in trouble sooner rather than later gives rescue agencies (or good Samaritans nearby) a quicker response time should assistance be needed. Once contact is established, pass crucial information as quickly as possible (location, type and size of vessel, number of people on board, boat name, etc) as there might not be a second chance should the fire knock out your electronics (another reason to have a handheld VHF fully charged at all times).

If the fire occurs while underway, stop the boat, paying attention to your surroundings, while maneuvering to avoid other vessels, to the extent possible. If the fire is in the engine room, one of the worst things to do is the first thing everyone wants to do: open up the compartment to see what's going on. Don't do it. You'll only provide additional oxygen, which can turn a smoldering fire into an abandon-ship-type conflagration. It can also overcome you with fumes.

The best way to fight an engine-room fire is having an appropriately sized, clean-agent automatic extinguisher system mounted within the engine compartment. "Automatic" is a key word here, but there should also be a manual discharge control located outside the engine compartment (normally at the helm) so that the unit can be immediately discharged in the event you or a crewmember become aware of a fire before the auto-release mechanism kicks in.

If you don't have an engine-room fire-suppression system, fire ports should be installed to fight engine fires. These are small ports or openings that allow you to discharge a portable, clean-agent fire extinguisher (such as Halotron) directly into the engine room without opening hatches or access panels. Ensure your fire port is big enough to accept the extinguisher nozzle, can be opened or accessed from outside the engine compartment, and is located so that the portable fire extinguisher can be properly discharged in accordance with the manufacturer's instructions (able to be discharged in an upright position, etc.). These extinguishers should be clearly marked for engine-room use only and mounted near the fire port.

Whether you use a portable unit and fire port or an automatic extinguisher, shut down the engine as soon as possible. Wind from boat movement can spread the fire. And importantly, a running engine can pump fire suppressant out of the engine compartment while continuing to suck in fresh air. It may also be feeding the fire with fuel. Most automatic units have an option for installing an automatic engine shutdown, an excellent idea that should be seriously considered. As clean-agent units kill the fire without damaging the engine and components, boaters can often restart their engines (after locating and correcting the initial problem) and return to port under their own power.

If every boater paid attention to these six potential problems, more than a third of all fires aboard boats would be prevented. Here are some real-life lessons from BoatUS: